Elon Musk, billionaire inventor of SpaceX, Tesla Motors, and I’m pretty sure sliced bread, spoke in an interview recently about his belief that the universe we inhabit is almost certainly a computer simulation being run by some higher-level civilization. In his own words:

The strongest argument for us probably being in a simulation I think is the following: 40 years ago we had Pong – two rectangles and a dot. That’s where we were. Now 40 years later we have photorealistic, 3D simulations with millions of people playing simultaneously and it’s getting better every year. And soon we’ll have virtual reality, we’ll have augmented reality. If you assume any rate of improvement at all, then the games will become indistinguishable from reality, just indistinguishable. 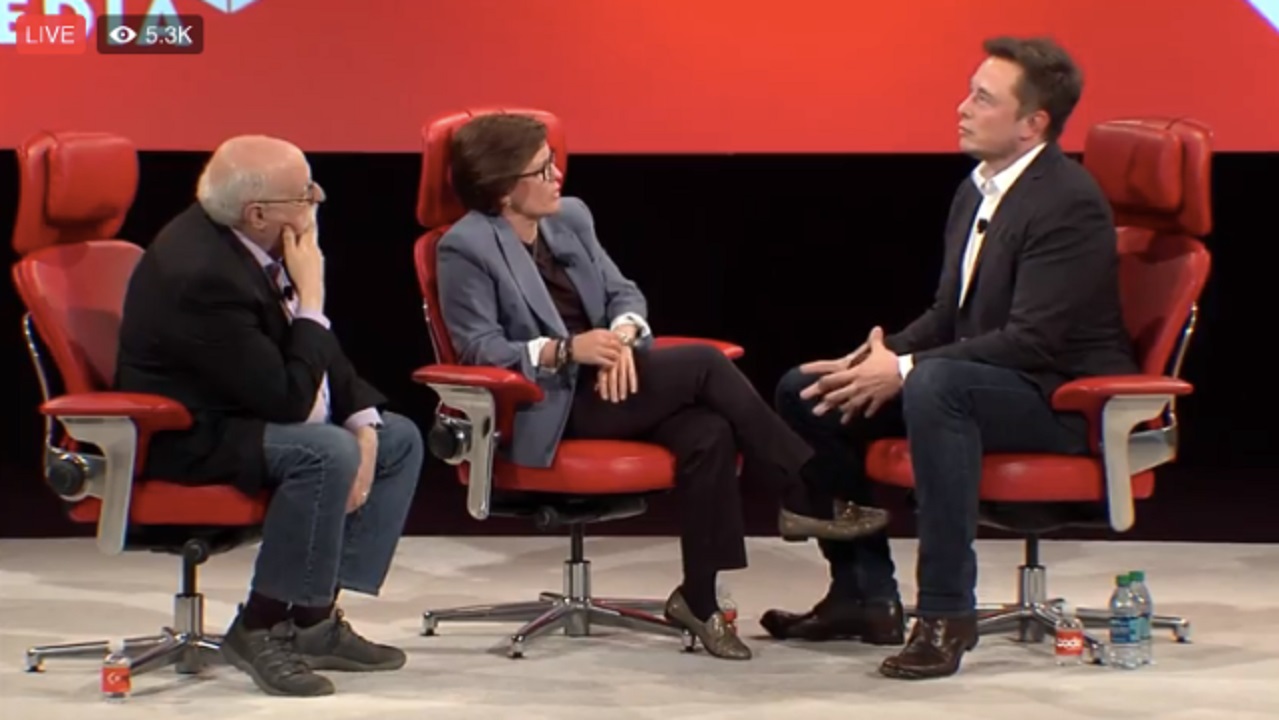 The idea isn’t a new one. Musk’s argument is basically if, as it seems, technology will continue to develop at its current rate until it becomes possible to perfectly simulate reality, then at some point in the future it is practically inevitable that someone will choose to create a simulated reality. But unless we are the first technologically advanced civilization in the history of the cosmos (which he thinks we probably aren’t), then this has probably already happened – some civilization has in fact created simulated realities, maybe even billions of them, and the odds seem to be better than our reality is one of those simulations rather than that it is the single, accidental, base reality of which there can, by definition, be only one.

The other option, he says, is that technological civilizations tend not to survive long enough to reach the stage where they can perfectly simulate realities, in which case we’re probably on our own way out anyway. So as weird as it might seem to think that we’re living in a simulation, it’s still preferable to the alternative.

The question most people are asking is: what if he’s right? It’s an interesting philosophical question, known as the Simulation Hypothesis, that’s most famously, most recently associated with The Matrix in modern times but which goes back centuries to Descartes and beyond. Descartes came to the conclusion that we weren’t living in a simulation (that is, that the world that we perceive is pretty much the way that we perceive it) basically because why would God bother to make a universe that is a certain way and then lie to us about it? (Also: what would He need with a starship?) Of course today, if we’re not talking about a perfect supernatural God kind of creator but rather physical beings much like ourselves except far more technologically advanced, we already know the answer: so that they can watch us shower and sleep and play video games, just like I did for those six months I was obsessed with The Sims 2. Because that is super entertaining and they’re bored.

The question that fewer people are asking is: so what if Elon Musk is right? What if we are living in a simulation? Would that actually change anything about what existence means or how we should be living? It seems to me that, no, it is utterly immaterial whether or not our universe is a simulation. And here’s why.

What is a simulation, anyway?

What would make us accept the proposition “our world is a simulation”? It would have to be something like: instead of the world being composed of the kinds of things of which we think it’s composed (i.e. what we perceive it being composed of, i.e. again matter), it’s instead actually composed of data in some kind of program, running on a computer that is presumably itself made out of matter in a way that this level of reality is not. The same way that a character in a videogame, no matter how photorealistic or convincing it may be, is essentially made up of data – whereas we, the person playing the game, is mostly made up of carbon and hydrogen and a few other things.

So let’s assume that this is true, that the apparent physical properties of matter are illusions and the actual composition of our world is data instead. How would this change anything?

And the answer is: it wouldn’t. Not at all. At least not in terms of how we ought to be living our lives. For proof of this, let’s turn to our old pal Homestar Runner (happy 20th, buddy!). Homestar Runner is a webtoon that’s written in the multimedia software platform Adobe Flash. For a super long time, Flash was the most common application for displaying multimedia content on the web. But because of its many faults, not the least of which being security concerns that led to its not being allowed on iPhones. That was a major blow to its market share, and it seems as if the last nail in its coffin is the inclusion of multimedia features in HTML5, the latest version of the programming language used for web content.

Or as Strong Bad from Homestar Runner puts it, Flash is dying.

It’s not easy to embed Flash videos into WordPress… so YouTube it is!

Strong Bad describes Flash as “like, what we breathe! The thing what creates us all!” In other words, it’s the source code of the universe. Strong Bad is perfectly aware of the fact that he’s living in some kind of a simulation, and even the specific programming language in which it’s written, and that the changing standard poses an existential risk. His anxiety isn’t about discovering that the world he lives in isn’t “real” – that it’s not made of stuff but rather of data – but only about the fact that Flash becoming obsolete is a threat to his world’s ongoing existence. Whether the world is made of matter or of data, whether it’s written in physics or in Flash, it’s still real enough for Homestar to run into those bushes back there (definitely bushes) and for Strong Bad to fear the danger to his life when it fails.

Before we knew about elements and atoms, we believed that everything was made up of combinations of four basic elemental substances: fire, earth, air, and water. Now we know that is obviously false, and that knowledge has led to all kinds of other discoveries and a deeper understanding of the physical structure of matter. But in terms of actually living life, it makes absolutely no difference whatsoever. Whether cigarettes contain nicotine and cyanide and tar or earth and air and fire, they are still equally bad for your heath, just like avocadoes are still delicious whether they’re high in water and earth or of potassium and ascorbic acid. Knowing the truth about these substances helpful for knowing why they have the properties that they have, but that knowledge doesn’t change what those properties are. Cigarettes and avocadoes still do the same things regardless of whether we think they’re made of atoms or of gleepglorps. Similarly, murder is still wrong whether people are made of matter or data. We still have to breathe whether or not air is real, and we still can’t see without eyes even if those eyes aren’t real. Sorry, Jaden.

This is why Cypher was the only sane person in The Matrix. If your brain is telling you that something tastes like steak, then it really does taste like steak. Because our experiences are what they are, whether they are caused by what we think is causing them or not. If someone crushes your foot with a hammer, the pain that you feel is real – even if you are actually just a brain in a vat and don’t even have any feet, or if your feet and your brain and the rest of the universe are computer simulations. By helping everybody get woke, Neo was doing nothing more than ruining countless lives for absolutely no benefit whatsoever. Reality may be objective, but our experience of it is always and inherently subjective. Nothing can ever change that, no matter how much information we have about what reality actually is. 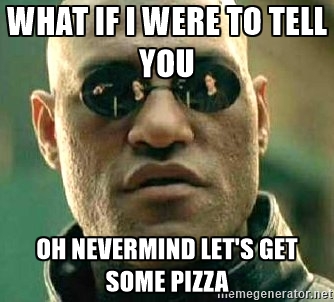 This is your brain on everything

Jhonen Vasquez gave an interview to IGN a while ago talking about the influence of videogames not only on his work but on his very existence. He explained that

[Video games are] just a huge part of my life and when people roll their eyes and think I’m wasting it I think of all the inspiration I get from it and then I look at their families and their ‘children’ and ‘important lives’ and pity them for thinking it’s any more real than me flying through space or exploring other worlds or crying alone in my house where if I died nobody would find me for weeks probably.

And he’s right! Most of what the human brain does is just interpreting the signals that it gets into a systematized pattern that it can make sense of. It doesn’t really care where those signals come from or what they really are, as long as they are organizable in such a way that the brain can make judgments about what’s dangerous and should be avoided and what’s safe and can be enjoyed, and that it can make reasonably accurate predictions about subsequent world states based on the state that it’s currently experiencing. Your brain isn’t in the business of differentiating the real from the unreal, it just uses your (extremely limited) senses to obtain the information it needs to help you predict the bits of the immediate future that will prevent you from being eaten by a terror bird or short-faced bear.

Which is why videogames are so compelling. As Jane McGonigal explains in her book Reality is Broken, videogames allow our brains to engage in diverse problem-solving scenarios that not only serve as a training ground for similar problems we might encounter in the real world, but creates a sense of accomplishment and fulfilment despite their not being “real” – because the human brain was not designed to tell the difference between real and unreal. It was designed to identify patterns, make predictions based on those patterns, and accomplish tasks according to those predictions. Whether you’re reading a novel, playing a videogame, or hunting a sabre-toothed deer, your brain lights up in all the same places and responds to sensory information in identical ways.  Playing videogames provides more diverse experiences while also being loads safer than performing analagous actions in the physical world, which, because your brain doesn’t care where its dopamine comes from, is the reason you’ll never hear from me again once Star Trek: Bridge Crew comes out.

All of which is to say: not only does it change nothing about how you should live your life if the universe is a simulation, but as far as your mind is concerned, there isn’t even any phenomenological difference between a simulation and “reality” itself.

Information Theory suggests that physical matter is, at its most fundamental level, actually composed of data, and that’s even if the universe isn’t a simulation running on some alien’s laptop in base-level reality. Imagine for a moment that’s true – that quarks are made of bits, that entropy is the ultimate substance of reality. Does that mean you don’t have to go to work tomorrow? Does it mean that you didn’t really miss the bus just now? Does it make food any less delicious or sunsets any less beautiful? Does it mean that you don’t love your significant other or your parents or your kids anymore? Does it change absolutely anything at all? I mean, really? 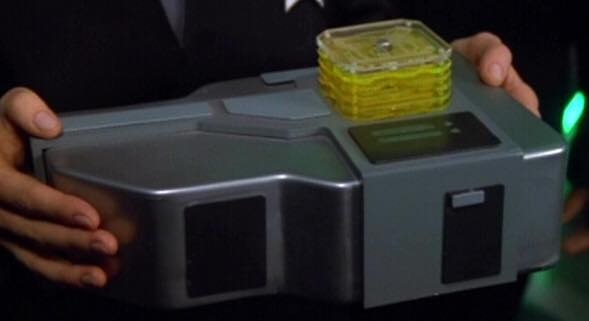 4 Comments on “Are We Living in a Simulation?”