A stunning number of landmark albums were released 25 years ago, in the late-summer and early Fall of 1991. Over the next few weeks, we’re going to spend some time looking back at this all-star musical Class of ’91. First Up? Pearl Jam’s Ten, which turns 25 on August 27, 2016.

Saturday is the 25th anniversary of Pearl Jam’s Ten, one of the twin pillars that lofted the rusty vaulted roof of grunge to the cultural heavens in the Year of Our Plaid, 1991. In honor of this cultural pole, the Foucault’s Pendulum to Nirvana’s The Satanic Verses, the Monsters, Inc. to Nirvana’s Shrek, the Purple Rain to Kurt Cobain’s Thriller,  throw yourself into the serpentine bluesed-out riffs, groaning hooks, half-strangled personal yarns and 12-string bass licks of The Other Grunge.

Pearl Jam fans love Pearl Jam, and two and half decades in, they have plenty of good reasons, but we’re not talking about Pearl Jam, we’re talking about Ten, the album with history written backwards and spinning.

Ten began with the purpose of finding a drummer and lead singer. Its creators joined a tribute supergroup before they played their own music together. Ten connected with millions of teenagers on a defining personal level before Pearl Jam knew what it was or what it was doing. Pearl Jam made great music videos that defined cultural moments, which they also hated on principle:

Ten doesn’t belong to the dedicated Pearl Jam fans. They have the finer, more sophisticated albums,by a band that grew and worked and toured together, and at least in my memory is the all-time king for concert bootleg collectors.

Ten doesn’t belong to alternative-minded Gen-Xers, either, who feasted on less mainstream fare before it was cool, and before that sort of feasting was cool, too.

Ten belongs to the tweens and teens of the early 90s, now in our 30s: It’s a work of passion, play, urgency, and insufficient understanding. It sings of intractable problems, untraversible divides, unknowable selves, and brutal, primal scenes. Ten speaks to what they were, what they needed, and what they became.

The Nevermind pole of grunge is a shattered, post-punk place, deconstructing and reconstructing, stripping itself bare and festooning itself in confounding array. Always on the edge of madness, always in personal pain, Kurt Cobain’s grunge confesses while it denies and demands intimacy while it pushes away. 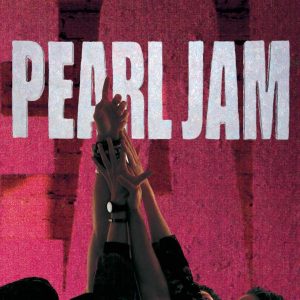 The Ten pole of grunge is a different center of weight and cultural attraction in a similar space, a moral and ethical center, taking offense both at the cruelty of social disregard and the arrogance of progressive instinct, not swimming naked in its own mind, but bound up in the problem of other minds. Ten bends broken shards of incoherent insight, pulled out of experience and newspaper clippings with tweezers and scissors, to fit the lyrical and rhythmic framings of its relentless guitars – light on their feet, but chunky in their steps.

My favorite, defining moment of Ten is in the bridge of “Alive,” the album’s first single. It’s a gorgeous, hilarious, damning, juvenile couplet, shining in silver clarity, that should be carved and inlaid on Dante’s Gate to Grunge, if it ever exists.

“‘Is something wrong?’ she said.

Of course there is.”

I love parsing Eddie Vedder’s answer here along the lines of: “Why are you in doubt that we are upset about something? Were we not wearing shabby enough clothes or screaming enough? Did we not break enough of our guitars at the ends of our concerts? Should we use more evocative and offensive descriptions of violence against children?”

The way his voice flattens out through the end of the line: “Of course there is,” there’s just a dab of exhaustion and boredom, just a nip of condescension, that smacks of adolescence very much in the Ten model of grunge.

In “Smells Like Teen Spirit,” the reasons that youth is angry are surreal juxtapositions of animals, racial epithets, social impulses, despairing self-deprecation, systemic violence, and probably mental illness, and in the end, you have an abstraction that hates you for trying to grasp it but also is indifferent to your presence. 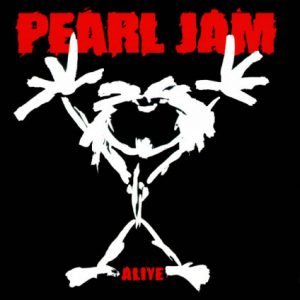 Here, and throughout Ten, the reasons that youth is angry are obvious. All you have to do is achieve minimum passing familiarity with the situation, and at the very least you will see that something is wrong. If you listen to any of the bands from this entire genre of music for five minutes, you will see that something is wrong. And the way Eddie Vedder just up and says so in so many words when so much of the genre is dedicated to obtuse imagery and symbolism, is delightful.

She Said He Said

But, to read this a bit more closely, there’s more happening here than just throwing shade at adults (at best clueless, at worse, abusive). There’s an interesting shift in the speakers here in the lyric that sets out a mission statement for much of the rest of Ten, as well.

The song has three speakers in it: 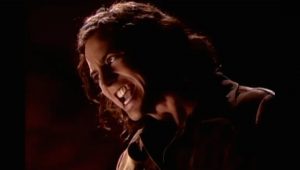 The song is inspired by true events, but is very far removed from them, such that none of these characters are meant to be “Eddie Vedder.” Eddie Vedder for the most part here is a storyteller taking on the role of the third-person narrator.

Throughout the album Eddie Vedder takes on the roles of a bunch of third-person narrators who are not all the same person, but are each positioned within the world of their songs, like the bully in “Jeremy,” or the angry critic in “Why Go” who has very specific criticisms of the doctor and the mother of the “She” in that song that you get the sense come from previous experience. There are also third-person narrators who seem more like storytellers than characters, like the narrator in “Even Flow.”

With all that in mind, reconsider the “Alive” couplet:

“‘Is something wrong?’ she said.

Of course there is.”

The speaker of the first line is the third-person narrator relaying the words of “She.” But in the second line, the song moves out of narration. For the rest of the bridge, there is no “he said,” and it’s ambiguous whether the person speaking is “Son,” to the mother in the moment, or the third-person narrator, passing judgment in retrospect on the mother’s hypocrisy and ignorance.

It’s like a waveform collapse – the two versions of the “Son” become the same character speaking with the same voice. When I earlier mentioned that Ten is “bound up in the problem of other minds,” I’m talking about Eddie Vedder’s various narrators and characters flow back and forth, out of their own perspectives, into the perspectives of other characters, especially characters who ought to have a voice and basic dignity and respect in society, but don’t. 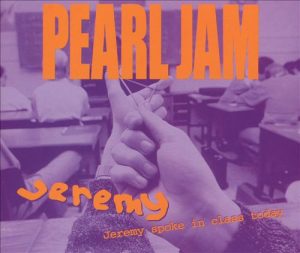 In “Jeremy,” does the bully character who Jeremy punched in the face really know all the specifics of Jeremy’s drawings and the specific reasons his parents fought with each other? It seems instead that the consciousness and perspective of the song moves through Jeremy’s eyes even as it’s being framed by an outsider.

It’s the same with the son in “Alive”, or the girl in “Why Go”, or the homeless man in “Even Flow”, it’s the same with the crazy guy in “Once”, whom, at least according to Vedder, is a different, later version of the Son character from Alive in a descent toward suicide – none of them are the narrators of their songs, but the narration of all their songs breaks into specifics that can realistically only be described from their perspectives.

Even the sad ex-boyfriend in “Black” “feels” the laughter of the children, rather than hears it, bridging the gap between people with yearning and empathy. So the boundaries of identity and subjectivity are fuzzy, and can be overpowered by the yearning to connect, justify and dignify the suffering that permeates the album’s lyrics.

What, Then is Grunge?

This all seems practically altruistic, but that should be no surprise, as Pearl Jam over the following decades would be quite the cause-driven project – politically active, strongly principled, sophisticated in its critiques of economic and social systems.

But it does pull up importantly short in one critical measure, and I think it is by this measure (as well as by some measures of style, arrangement and instrumentation, fashion and of course geography) that it Ten can share mindspace with Nevermind, Dirt, Badmotorfinger and its other foundational grunge contemporaries: Ten identifies a lot of suffering people and a lot of social problems, but for the most part it does not propose solutions to them (“Maybe someday another child won’t feel as alone as she does” in “Why Go” is about as thin and skeptical a note of optimism as you’ll find.).

Instead, Ten reaches out to connect with, empathize with, and then rage on behalf of and in consonance with the suffering of its various abused song subjects. The fact that they are not being helped in the songs, or by the band, is essential to the understanding and rage associated with their situations.

The world of Ten is a dirty, grimy world, a grungy world, where obvious problems are missed by people with a responsibility to know better. Children are abused and taken advantage of, but are also kind of horrible themselves in ways that make them hard to react to in any way but just looking. The impossible power to actually step into someone else’s shoes very much unlike yourself doesn’t bring you to solutions, but to the realization the broader problem is the disconnection of everyone and everything else.

It’s not the singer who is in a slow downward spiral with nobody coming to save him and no desire to save himself – it’s these external people, it’s the world.

And this horrible but energizing realization that no one is coming to help should be familiar to many decades of our culture. We’ve seen it from Neville Longbottom to Katniss Everdeen, from the Goonies to Stranger Things and every interpretation in between. It’s when you find out you started growing up when you weren’t watching, when no one was ready, and that the scope of your life has finally grown to the point that you interact with the world in important, risky, scary ways that your parents can’t intermediate.

That, and the Freudian psychodrama, and the furious four-handed guitar riffs, are enough to enshrine it for a generation and all the decades it will experience as speaking to them and to the world they saw in a formative and critical moment. For a lot of us, this is our grunge – our dirty, angry entrance into ourselves.

Even if Vs. and Vitalogy were better.

For more in-depth discussion of Pearl Jam’s Ten, check out episode 225 of the Theory for Turntables podcast: “A Failure of Social Institutions as Represented by the Recess Lady.”

One Comment on “Pearl Jam’s Ten: Grunge Means No One is Coming to Save You”