As summer blockbuster season extends into April, encompasses more of the globe, and commands ever-increasing budgets, it gets harder to say what the biggest box office performer of all time (OF ALL TIME) is. Tentpole pictures are expected to gross hundreds of millions in the U.S., if not a billion dollars worldwide. But do these astronomical figures mean we’re living in a new era of superstar cinema?

Savvy observers will note that box office grosses should be adjusted for inflation – the diminishing purchasing power of the U.S. dollar. Sure, The Dark Knight Rises pulled in $448MM in U.S. theater receipts, and that’s very impressive. But $448MM in 2012 dollars is only worth $255MM in 1990 dollars. Home Alone ($285MM in 1990 dollars) blows right by it. I guess Macaulay Culkin has more star power than Christian Bale when purchasing parity is taken into account.
So we know that we need to adjust for inflation to get a more accurate picture of the true blockbuster. 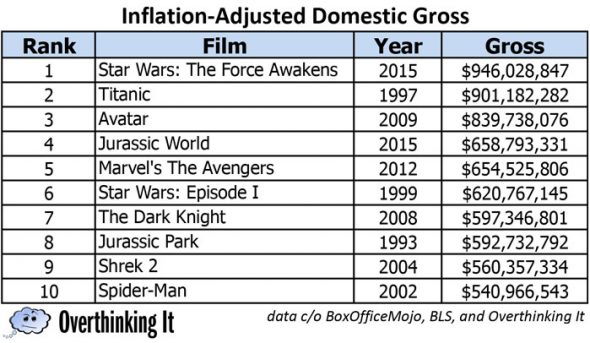 (NOTE: I only looked at the top 10 movies from each year. It’s possible that the #12 movie of 1989 – The War of the Roses – might throw this data off, but it seems unlikely. I also only went back 30 years because it’s a nice round number, it takes us to the era of such beloved blockbusters as Top Gun and Aliens, and because data prior to that is harder to verify.)

So far, all names we’d recognize. No huge surprises. But what other variables should we account for?

So we re-ran the data accounting for inflation and population (sources for population data include this website). And what did we find? 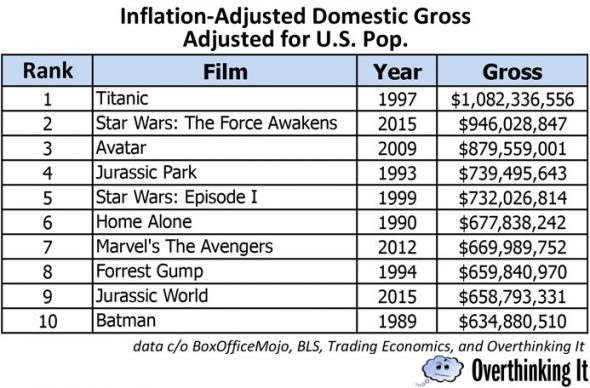 The #1 and #2 movies swap places, as do the two Jurassic Park entries on this list (give or take a rank). The Dark Knight falls off the list, to be replaced by Batman. Avatar is still #3!

Surprisingly, Forrest Gump and Home Alone vault into the ranking. This may be more a function of age than of changing population dynamics. It’s hard to imagine a family-friendly drama or a moving prestige picture drawing the same box office in 2016 as it would have in 1990. If Forrest Gump came out today, it feels like the kind of movie I’d wait to see on Netflix, but Star Wars: The Force Awakens is best consumed on the big screen.

But that’s not all that’s changed! The American cinema marketplace has expanded as well. Regional theaters have been consolidated into national chains, and multiplexes have become megaplexes. The #1 movie of 1986 (Top Gun) opened on 1,531 screens; the #1 movie of 2015 (SW:TFA) opened on 4,134.

So I re-re-ran the data, controlling for inflation, population, and the number of theaters a movie ran in (data again c/o BoxOfficeMojo). And this time, the rankings are really surprising. 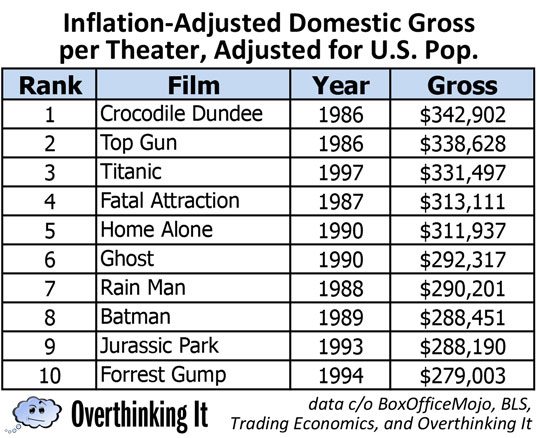 That is not a typo. Controlling for inflation, population, and the number of theaters it appeared in, Crocodile Dundee is the highest-grossing movie of the last 30 years. This defies my capacity as an amateur data journalist to explain. Was 1986 that dull a year for all other forms of media that people packed out the 1,495 theaters that Crocodile Dundee was showing in? Was Australia that exotic to jaded American tastes? Was the movie better than I remember?

The predominance of pre-2000 movies in this new ranking makes me worry about my method. Maybe controlling for number of theaters and population is too much. The number of theaters in the U.S. should correlate somewhat with population – Loews wouldn’t build more screens unless they thought there were more asses to put in seats.

So I took the average number of theaters that the top 10 movies of a given year appeared in, and graphed it against U.S. population by year. As I discovered, there’s a very tight correlation – from about 2003 onward. 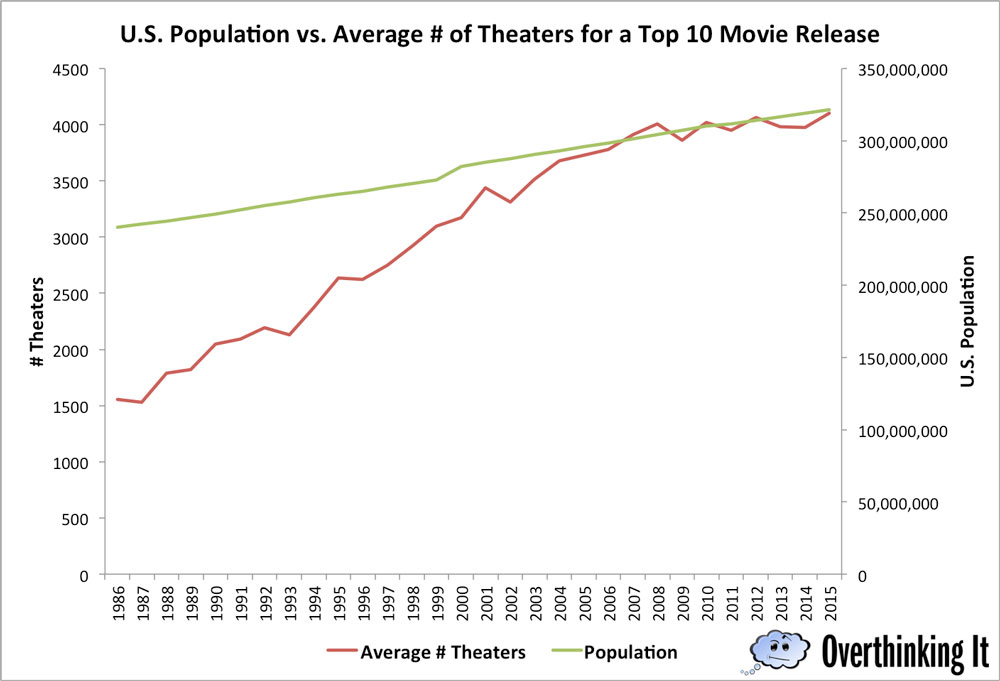 What interests me more, though, is the huge gap between population and theaters between 1986 and 2003. Having grown up in the Eighties, I don’t recall feeling particularly underserved. It wasn’t hard to see the biggest releases, even though they appeared on fewer than half as many screens as they do today. But then, I was a child and my ability to see movies was contingent on my parents’ availability and willingness.

It’s also worth noting that movies stayed in theaters longer in the Eighties than they do today, and that the pressure is on to keep shrinking this window. If you didn’t see Crocodile Dundee in its first week, you could have easily seen it in its twelfth.

So while gross per theater, adjusted by population, is an interesting metric, I’m not sure it’s a useful one. The American cinema landscape changed drastically in the 21st century, so there’s no easy comparison to the years prior. It’s no longer apples to apples, so I can’t stand by the conclusions with as much conviction. Sorry, Paul Hogan! You’re still a superstar to me! 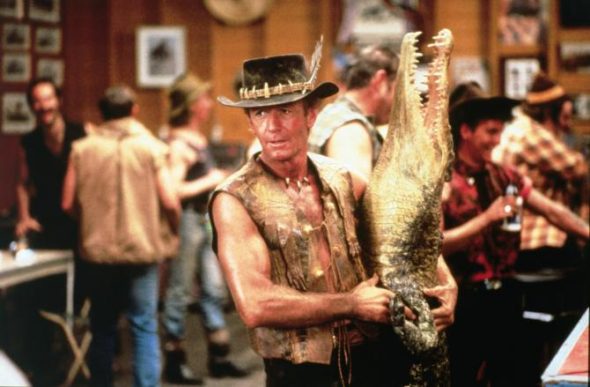 So there are many different ways to examine this data, and I don’t know if an obvious winning methodology emerges. I’ve made the data available on Google Drive, so pivot it, slice it, or add your own spin on it. If you find something that I missed, let us know!