This of course made me go back and listen to the original Ghostbusters theme song as quickly as I could:

Listening to these two versions of the Ghostbusters theme song back to back got me thinking about theme songs to movies in general, which seem a bit quaint nowadays. Certainly, movie soundtracks are still a big deal. But I’m not talking about songs that happen to be written FOR a movie. I’m talking about songs ABOUT the movie. And for some reason, my mind immediately jumps to this masterpiece:

Richard Rosenbaum:  What strikes me most about WWW is that the song was actually better than the movie. It also explicitly references Ghostbusters. (“Now who ya gonna call?” “Not the G.B.’s.”)

This goes back to Sheely and my discussion about Ninja Turtles Rap Songs, which every TMNT movie had until Out of the Shadows. It’s kind of a peculiar artifact that seems to originate in the 80s and then just sticks around to the 90s and then stops, except for movies like GB and TMNT that are deliberate throwbacks to that era.

The other obvious one is “Back in Time” by Huey Lewis from Back to the Future. (Which, legend has it, he was persuaded to do after he passed on doing the Ghostbusters theme the year before and regretted it.)

Ryan Sheely:  Another favorite of mine from the 90s is the Quad City DJs Space Jam song:

Years ago Pete alerted me to a reddit community devoted entirely to mashing up the Space Jam remix with other songs. Speaking of the Ghostbusters song, here is one of my personal favorite space jam mashups.

Belinkie:  I might have to “well actually” you and suggest that the Space Jam song isn’t really about the movie, any more than “Skyfall” is about the James Bond movie Skyfall. It takes the title but nothing else. Doesn’t a true theme song needs to be ABOUT the movie, name-checking characters, plot points, etc. That’s a lot rarer, because it usually makes more sense to write a song that’s “inspired by” the movie but not explicitly about it. (“My Heart Will Go On” is clearly inspired by Titanic, but it’s not about Titanic.)

There may be something irredeemably cheesy about a song describing a movie. Exhibit A:

The Ghostbusters theme song, of course, leans into this cheesiness. It aims to create a silly marketing jingle, and it knocks it so far out of the park that it comes out the other side of cheesy into greatness.

Peter Fenzel:  My favorite song that relates to this genre is the Bon Jovi song “Always,” which was released on the “Crossroads” greatest hits album despite having not appeared before in any major way.

If you know the song, you know it starts with “This Romeo is bleeding, but you can’t see his blood…” This is a fairly direct pull from the eponymous Tom Waits song, which starts with the line, “Romeo is bleeding, but not as you’d notice…” Well, in the 90s it was kind of a thing to name movies after old popular songs even if the connection was loose at best (“Fools Rush In,” “My Boyfriend’s Back,” and “My Girl” come to mind). The story I heard in an old interview with Jon Bon Jovi was that the song was commissioned for the (and here’s a series of words you didn’t expect to read in this order today) 1993 Gary Oldman erotic thriller Romeo Is Bleeding, but nobody bothered to tell Jon Bon Jovi what the movie was actually about. 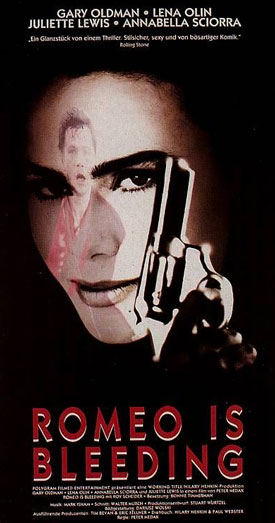 The movie is named after the Tom Waits song, but people also tend to not understand the lyrics of Tom Waits songs on first listen anyway. And the connection between the song and the movie turns out to be… rather loose.
Romeo is Bleeding: The Movie Jon Bon Jovi Wrote a Song For is about a deadly game of cat and mouse between the future Commissioner Gordon and a minxy Russian assassin into S&M and framing people for murder. The defining images from the TV commercials were Gary Oldman looking highly distraught with blood on his face and a woman whose face is not shown wearing a garter belt and kicking out the rear windshield of the car with her heels.

The Bon Jovi song, which is about a profession of devotion in the wake of a breakup, has nothing to do with any of this.

So Bon Jovi all got together to screen this movie before it came out. Maybe because it turned out to be so unrelated to what they thought it was about, or because it was so clearly trashy, or maybe because it was so brutally violent, for whatever reason, Bon Jovi was all “Eff this nonsense,” withdrew their song from the movie and released it themselves.

You can add it to the list of songs that awkwardly say the name of the movie they are in and it doesn’t really fit (like Tina Turner’s “We Don’t Need Another Hero,” which randomly name checks “Thunderdome”). Except in this case you would never know it unless you cared enough about Bon Jovi enough or really relished the prospect of handcuffing Gary Oldman to a bed. 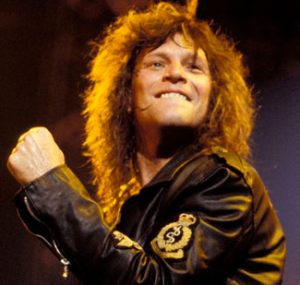 Sheely:  The story of “Always” is really interesting, and it relates to what Belinkie was saying above about this notion of “true theme songs” as being about the movie and the resulting cheesiness of such songs. It seems to me that these two features are closely linked. In other words, the process of overtly writing a song about a movie almost guarantees that the song will be cheesy, either instantly, or definitely with hindsight. I see the Bon Jovi retraction of “Always” as recognizing that if the song were linked to Romeo is Bleeding, it would fall into a kind of “Theme Song Uncanny Valley”: too connected to the film to escape the cheesiness trap, but not so connected that it actually makes any sense (or benefits from a symbiotic novelty song bump the way “Ghostbusters,” “Wild Wild West,” and “Men In Black” Did).

I do want to return to the question of how we identify instances of this phenomenon, and not just because I want “Space Jam” to count. How much of the movie does the song have to incorporate in order to be thought of as a “theme song”? I’d like to use some examples to see where we can draw the line (or if this is more of a continuum). 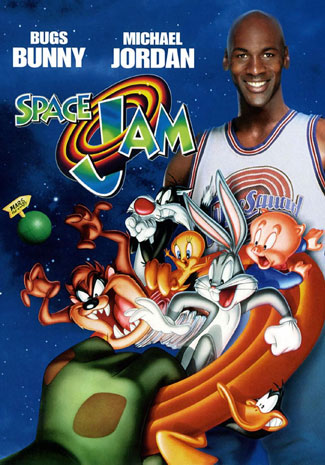 I think “Space Jam” still counts as a theme song, even if it is a weaker one, because it:

Even though it doesn’t mention character or plot details, it shares important elements with the movie and is inextricably linked to it (it is pretty impossible to play the song “Space Jam” without thinking of the movie Space Jam, and a lot of the song’s cult appeal is due to the connection to the movie).

In fact, I don’t necessarily think that “Ghostbusters” is that much more filled with the specifics of the movie than “Space Jam.” In my recollection, it also doesn’t name specific characters or plot points. Although, I guess the overall setup of the song does have a bit more of a narrative structure that is in harmony with the plot of the movie (“When there’s something strange in your neighborhood, who you gonna call? Ghostbusters!”), but it is pretty skeletal (pun only partially intended).

I think if this is a continuum, “Ghostbusters” is not at the extreme end of “closely intertwined with the movie.” I think the Will Smith songs, “Wild Wild West” and “Men in Black,” are maybe as close as you get to that extreme, not only because they name drop a lot of specifics from the movies, but also because Smith both performs the songs and stars in the movies. The songs aren’t exactly rapped in character (“Wild Wild West” is arguably a bit more than “MIB”), but his presence in both closely links the song and the film.

Interestingly, the Will Smith song from Men In Black 2 (“Black Suits Comin”) is arguably a little further away from “Men in Black” and “Wild Wild West” than even “Space Jam” or “Ghostbusters” as it definitely gets more vague. If anything it is more about Will Smith being in MIB 2rather than about the movie itself:

Here are a few more test cases for you. Where do you put these (either on a continuum or in a more strict “in or out” dichotomy)?

1) “All for Love” by Bryan Adams, Sting, Rod Stewart,  from the Three Musketeers. It explicitly mentions dialogue from the movie/books, but that’s about it:

2) “Batdance,” by Prince from Batman (1989). “Batdance” mentions “bat” and samples dialogue from the film, but the lyrics of the song itself are pretty vague:

3) “Exit Music (For A Film), ” by Radiohead. It was originally written for the Baz Luhrmann Romeo+Juliet, and it is a kind of alternate world Romeo and Juliet story, but ended up being replaced by the B-Side “Talk Show Host” and eventually ended up on OK Computer instead.

Belinkie:  You’ve sold me: I think it’s a continuum, guys! Which means we’ve got another infographic coming on!

Sheely: Come on and slam and welcome to the infographic jam!

Stay tuned for part II of this article next week, where we attempt to create a taxonomy of movie theme songs. Any particular ones you’d like us to discuss?

10 Comments on “Where Have all of the Movie Theme Songs Gone?”