The second in what’s probably going to be at least three volumes in the rebooted Teenage Mutant Ninja Turtles movie franchise is that rarest of jewels: a sequel that’s actually better than the original. Director David Green, taking over from Jonathan Liebesman who helmed the 2014 film, rescued Out of the Shadows (the third Turtles product to bear that name, as a matter of fact) from many of the mistakes that its predecessor made. Although not everything was possible to fix, this feels like a Turtles movie made by a Turtles fan, which the previous one – as I pointed out at the time – did not.

Currently, Out of the Shadows is sitting at 36% freshness on Rotten Tomatoes – the second-highest rating for any of the six-so-far TMNT movies – but what I think that the still-mostly-bad reviews don’t take into account is that this movie had a ton of baggage that it needed to deal with which it mostly successfully did. First of all it had to mitigate as much of the damage as possible that the 2014 made in its attempt to be a grim-and-gritty movie for kids that wanted simultaneously to appeal to and subvert the nostalgia that its target audience’s parents (of the original cartoon TMNT generation, mostly) were likely to have. Second, it needed to be more honest about what it was actually an adaptation of – the 2014 attempted to forge a completely new continuity while seemingly trying to play down its debt to its most obvious inspiration, which was the 1987 cartoon. Out of the Shadows, on the other hand, absolutely embraces the fact that it is an adaptation of that cartoon (very much in the way that the 1990s live-action Turtles films were not, drawing their inspiration almost entirely from the original Mirage comics, with only the bare necessities of elements flowing in from the cartoon, such as April O’Neil being a reporter, and the Turtles’ obsession with pizza).

What David Green ends up doing is giving us the movie that we all expected The Secret of the Ooze to be when we were kids in 1991: namely, the inclusion of Bebop and Rocksteady, Krang, the Technodrome, and even Baxter Stockman (albeit a version of Baxter that is slightly closer to his Mirage original).

Smartly, this movie almost completely ignores the Turtles’ origin story as told in the first movie – that they were created through genetic experimentation, rather than accidentally coming into contact with some mysterious glowing chemical, and that Splinter learned his ninjutsu skills that he passed onto the Turtles by reading it from a freaking book rather than having any connection whatsoever to anyone named Hamato Yoshi. The movie doesn’t reference that nonsense so that we can forget about it, replace it in our minds, or just not worry about it at all. The Turtles are the Turtles, and what’s important in this movie is who they are, not where they came from.

It also turns the Foot Clan back into, you know, actual ninjas, rather than the heavily-armoured gun-toting militia that they were inexplicably turned into in the first movie. In the same vein, Out of the Shadows dispenses entirely with the absurd Eric Sacks character (heroically played in the first movie by William Fichtner, who deserved better); Sacks was originally supposed to be Shredder in the first film, but evidently the filmmakers came slightly to their senses early enough to commit to significant reshoots, in which Sacks was changed into the Shredder’s henchman, and Shredder himself was returned to his true character – you know, a ninja master from Japan, not just some corporate white guy. The Turtles in this movie are still ugly as hell, though, which is unfortunate but there’s not really very much anyone can do about the character designs at this point but try to get used to them.

On the other side of things, what this movie brings that’s new – or, well, not new new, but new to this particular modern incarnation – are characters that we know, and in character characters, for that matter. Out of the Shadows is primarily concerned with identity, which is one of the strongest themes that runs through the entire Ninja Turtles franchise – in particular, hybridized identities and how we come to terms with them. Introducing these new mutants – and these new mutants in particular – is the perfect way to highlight and contrast the issues of identity that this movie wants to address.

The Turtles have already saved New York City once, and yet they couldn’t take any credit for it because of who and what they are – namely, giant mutant turtles. Leonardo, very much in character for him, rationalizes their continued obscurity by appealing to one important aspect of their identity: they are ninjas, and ninjas remain hidden, they live in the shadows. But all the Turtles, to some extent, crave not necessarily adulation but at least the end of their isolation. Early on Michelangelo goes topside to join a Halloween parade, ecstatic that he can finally move around aboveground and interact with his fellow New Yorkers – as long as they think he’s just a guy wearing a costume, of course. This starkly contrasts with the later scene in the police station, when the Turtles are spotted by several officers and assumed to be bad guys. “Monsters,” one of the cops says. “They’re monsters.”

This genuinely hurts Mikey’s feelings. “We’re not monsters,” he says. And of course we know that he’s right. Mikey may joke around and be silly, but that’s largely because he only feels comfortable when he and the people around him are happy. He wants everybody to be friends, and being discriminated against for his looks, his species, is deeply painful for him.

Raphael, of course, gets mad and takes action. When Donatello discovers that the ooze that Krang gave to Shredder may contain the secret of transforming the four of them into humans, he’s excited at the possibility – not only for scientific reasons, but for social ones. He defers to Leo’s authority, though; Raphael most definitely does not. Nobody wants to be oppressed, of course, but what we learn about the Turtles from their behaviour in this movie is that their interest in becoming human stems significantly from their internalized insecurities about their own identity. They are a mess of contradictions and deeply crave acceptance from others because they have so much difficulty reconciling the paradoxes of their own existence.

Bebop and Rocksteady, on the other hand, undergo the very opposite transformation to what the Turtles seem to want; they turn from humans to mutant animals and they love it. Bebop and Rocksteady, in a rare example of this kind of close male friendship in a modern movie, absolutely could not care less about any perceived loss of status or an inability to get along in ordinary human society. It’s not only that they were already placed outside of that society by the very fact of being criminals; it’s not even just that their new bodies make them stronger and more intimidating than they were before, which are basically the qualities that they value the most. No, the main thing is that they don’t care what anyone else thinks because they have each other. Bebop and Rocksteady share a bond that completely transcends their physical appearance or the extent to which they fit in with society’s expectations for what adult human men are supposed to look or act like. 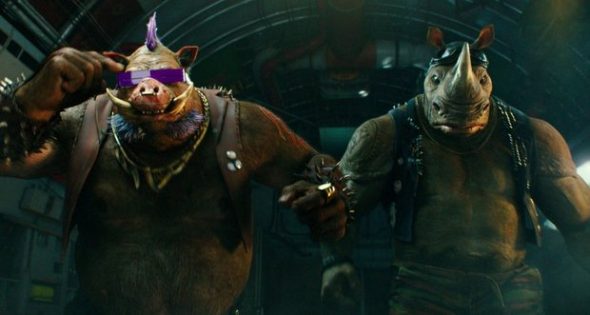 The Turtles, although they have each other and Splinter, who loves them unconditionally, are also teenagers, at a point in their lives when a powerful craving for social acceptance comes to blows with a need to differentiate themselves from their parents and siblings.They feel much less secure in their identities than Bebop and Rocksteady do, and only fully learn to accept themselves when it becomes clear to them that who they are is important. While they didn’t choose – and likely wouldn’t have chosen – the circumstances of their creation, they do get to decide what they do and what they stand for, and that is what’s really important, not whether or not ignorant, prejudiced strangers think that they’re monsters. By the end of this movie we haven’t only seen the Turtles defeat the bad guys and save the world once again, we’ve watched them grow up a little. It’s kind of both sweet and powerful.

The movie has its problems too, of course. The first meeting between Shredder and Krang (something that we’ve never seen before in any incarnation, and which could have been fairly epic if a little more care had been put into it) is ridiculously abrupt and unconvincing. Shredder is utterly nonchalant when his teleportation is hijacked by this disgusting extradimensional being, and instantly trusts the creature when it proposes an alliance between them.

The transformation of Bebop and Rocksteady from human thugs into mutant animals is explained by Baxter Stockman as the ooze having activating some ancient suppressed DNA from way back in our deep evolutionary history or something like that, which, no, I’m pretty sure that humans haven’t got any rhinoceros genes no matter how far you go back. If they’d mutated into some kind of Cretaceous boreoeutheria, maybe.

The fetch quest plot (Shredder and the Turtles race to find the three easy pieces of Krang’s transdimensional portal generator that broke apart upon entry into Earth’s atmosphere and must be reassembled to allow Krang to begin bringing the Technodrome to Earth) is lazy and straight out of a 16-bit JRPG – although it does create the opportunity for the movie’s crowning action sequence, a skydive turned Mutant Melee that puts the 2014 film’s incomprehensible snow chase scene to shame.

To be fair, the current (fourth) season of the Nickelodeon TMNT cartoon also used the “you must find three pieces of an ancient superweapon before the bad guys do” trope, but in that case it made more sense, was better earned narratively, and took our heroes six months to accomplish (or rather, fail to accomplish) than when the same trope was employed in OotS.

But these flaws are fairly minor in the grand scheme of things, both because its predecessor’s sins were so much greater, but also because this movie is sufficiently fun that we’re willing to forgive the handful of dumb contrivances and action clichés that it asks us to swallow. There’s something else that the 2014 movie gave us in insufficient amounts: fun. What we got here was some genuine Turtle Power. Considering the many ways in which the 2014 Turtles movie disappointed us, that’s actually a pretty major accomplishment.