It’s being ravaged by critics  (then again, they always were) but believe it or not, there’s actually a whole lot to say about the Michael Bay-produced, Jonathan Liebsman-directed and Megan Fox-starring attempted blockbuster Teenage Mutant Ninja Turtles, and where it fits in the overall context of the TMNT franchise’s thirty year history of global popularity and cultural influence.

Let’s Start with The Ugly

The character designs in this movie are needlessly “realistic.” Since they were first revealed they’ve been widely mocked – this movie makes the Turtles into six-foot-plus hunchbacks, giving them faces with nostrils and weird human-like lips. As others have pointed out, they look a lot like Shrek slow-boned one of the Goombas from the Super Mario Brothers movie.

Now, there’s nothing inherently wrong with changing the Turtles’ designs – after all, the original 1987 cartoon invented the different-colored masks (in the original comic book, all four Turtles wore red), and gave them all monogrammed belt-buckles to boot. The short-lived comic series Teenage Mutant Ninja Turtles Volume 3, published by Image Comics in the late ‘90s, included the systematic and senseless disfigurement of three of the four turtles, evidently in the interest of making them easier to tell apart in a black-and-white book, but in effect giving readers the impression that the creators of the book (who were decidedly not Eastman & Laird, the actual creators of the Turtles) didn’t really care about these characters and were willing to hurt them for no legitimate narrative reason. The ongoing (and excellent) Nickelodeon TMNT cartoon has redesigned each Turtle with quite different physiques, giving them variations in height and build and distinguishing features – in this, the Nick show has been both subtle and effective. The designs in this movie are not particularly either subtle or effective, although you kind of get used to it after a while. Splinter, the Turtles’ mutant rat sensei and adoptive father, doesn’t fare particularly well here visually. He does look very rat-like (his eyes are notably impressive in this way), but he also looks very computer-generated, which the Turtles, for all their weird design decisions, don’t. 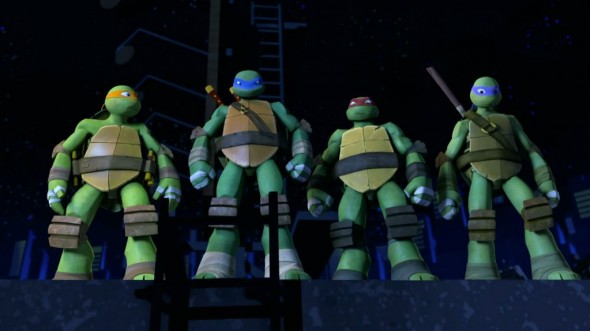 One of the major themes of the TMNT franchise has been the creative power of coincidence, of learning to make the best of the fact that so much of what we are is the result of random events. In most past incarnations, the Turtles’ origin is accident piled on top of accident: the creation of the mutagen, the Turtles coming into contact with it, its effects on them, and their adoption by an old rat with ties to an ancient tradition and a score to settle. In this film, on the other hand, Splinter and the Turtles are the result of deliberate genetic experimentation, and their survival as infants was the direct result of April O’Neil’s actions as a child. Making these connections part of the Turtles’ backstory robs the characters of some of their agency; their struggle to come to terms with what they are and their reasons for becoming heroes is in large part a result of their being children of circumstance.

Contrast the Turtles’ apparent “destiny” in this film with their discovery of the “secret of the ooze” in the second TMNT movie from 1991: that secret being that the mutagen itself and the Turtles’ exposure to it was all a big mistake. There, the revelation leaves the Turtles fairly reeling. Donatello in particular has a moment of real existential crisis: “I thought there’d be something,” he explains. “I thought we’d find out we were special.” Learning that our specialness as individuals is in no way cancelled out by the fact that our birth was a confluence of accidents is part of what TMNT is all about. In this new movie, making the Turtles special has actually made them a lot less special as characters.

Speaking of Donatello and his angst, in this new movie we get precious few of those important character moments. In the original 1990 live-action film, there’s a brief but profound scene, where Michelangelo is waiting below a sewer grate for a pizza to be delivered – the thirty minute delivery window is about to expire, and Mike is anticipating a discount on the food. Donatello skateboards over, sits down next to Mikey, and then this exchange happens:

Don’s attempt to talk to his brother about their father’s mortality is brushed away by Mike’s complete unwillingness to acknowledge it. It’s a brutally real moment that shows the characters have genuine emotional depth. Similar notable moments in other Turtles films include Don’s aforementioned existential crisis in Secret of the Ooze; a scene in 2007’s CGI TMNT where the Turtles’ trusted human friend Casey Jones, now April O’Neil’s boyfriend, reveals to Raphael that he’s afraid he can’t be the grown-up that April needs him to be; and, in that same movie, this confrontation erupts between Leonardo and Raphael:

Contrast this with Marvel’s Guardians of the Galaxy, another comic book adaptation that opened last week to huge acclaim and box office success: all five main protagonists in that movie have clear motivations and complete character arcs that get resolution by the end – even the talking tree! So it is possible. Ninja Turtles 2014 chooses not to do it.

Now, finally, for The Good (and there is good in this movie)

Ninja Turtles – which is what I’ll call it from here on out, since that’s what it obviously wants to be called if you look at the promo material – could have gone straight for the nostalgia vein, but, smartly, it doesn’t. There are certainly shouts-out to the 1980s cartoon from which it draws most of its inspiration (Michelangelo gets to deploy the joyful “Cowabunga!” for which he’s so well known, and even Shredder utters his cartoon catch phrase, “Tonight I dine on turtle soup” – in Japanese, no less! But Ninja Turtles also dares to do something new without disrespectfully rejecting the accumulated cachet – and, yes, baggage – of thirty years of the TMNT franchise.

The Turtles are in full possession of their distinct and distinguishable personalities, and the dynamic between the four brothers is spot-on. Michelangelo gets most of the best lines – and the Turtles’ teenageness is put front-and-center here, with Mikey’s goofily optimistic awkwardness toward April, the first girl he’s ever met, providing a good amount of the comedy – but all the Turtles are portrayed effectively as having their own interests, quirks, strengths and weaknesses, that are perfectly in tune with the Turtles that we’ve known and loved for so long. One really sweet and funny little scene that makes this apparent comes near the end of the movie, when the Turtles are in an elevator going up to the top of a skyscraper to confront Shredder. As the elevator slowly ascends, the Turtles get bored and start pounding out a hip-hop rhythm using their weapons and beatboxing, and kind of dancing around a little until they reach the top floor. It’s a great scene because it shows how completely in tune the four brothers are with each other – literally and figuratively. They’ve been together their whole lives. They are perfectly comfortable around each other.

The Turtles are clearly a family in this movie, and family – in particular the unconventional, post-nuclear kinds of families that are ever more common in America and around the world since the late Twentieth Century – has always been a major theme of the TMNT franchise. To the extent that Ninja Turtles has themes, this is the one it homes in on. And it signals this in a very interesting way: scientist and entrepreneur Eric Sachs (the miniboss to Shredder’s big bad) was, he explains, born on an American military base in Japan. When his biological father was killed in Vietnam, Eric was left orphaned, alone, a foreigner in a country that rejected him and which he didn’t understand. It was under these circumstances that he was adopted and raised by Shredder, leading to Sachs’s unyielding loyalty to the criminal leader of the Foot Clan. Creating this kind of relationship with Shredder and Sachs – which clearly is designed to mirror the relationship between Splinter and the Turtles – shows that the writers of Ninja Turtles understood TMNT’s longstanding message about the nature and importance of unconventional families. At one point, Shredder denigrates Splinter’s fatherly feelings toward the Turtles, despite (we are meant to infer) his relationship with Sachs being of precisely the same sort. The problem is that Ninja Turtles gives us few hints of any substantial inner life for Shredder that would make us care about the parallels being set up between Shredder/Sachs and Splinter/Turtles. I wish that the movie had taken the time to explore that dynamic in greater depth.

(Incidentally, it’s also to the movie’s credit that Karai appears in Ninja Turtles not, as could so easily have been the case, as a piece of exploitative eye-candy, but as Shredder’s second in command, a serious and competent adult.)

I’m going to be honest: I fully expected to hate this movie. I did not hate it. As the ongoing history of the franchise is written, Ninja Turtles may not go down as a significant adaptation that adds something unique to the TMNT legacy the way that the original cartoon and the first live-action movie did, and like I believe the current Nickelodeon toon will. But it’s no Next Mutation either (the live-action Power Rangers-style series that most Turtles fans would like to forget). It’s maybe most like one of the TMNT videogames based on the popularity of the 1987 cartoon: a sidescrolling beat-em-up with sufficient amounts of the characters, action, and humor that we expect from the Teenage Mutant Ninja Turtles to keep us engaged.

Surprisingly, the end of Ninja Turtles features what I read as a musical reference to the Charlie Kaufman-penned 2002 film Adaptation, of all things. Adaptation was, in large part, about the difficulty-unto-impossibility of adapting to film a work of such multifarious complexity as, in that case, the book The Orchid Thief by Susan Orlean. In the case of Ninja Turtles, this new adaptation brings with it many risks – artistic, cultural, and commercial. And the use of “Happy Together” performed by, of course, 1960s pop band The Turtles, is (I’m willing to believe) a signal to the audience that the people behind this movie were clearly aware of those dangers, and chose to make the attempt regardless.

But Teenage Mutant Ninja Turtles has always been (among other things) about adaptation – in the sense of learning how to thrive in whatever environment you find yourself.

The message of TMNT is: Things change. Roll with it.