This year, we’re going to be putting our day-after observations about Game of Thrones into writing, in a series we call Game of Thrones Unlocked. In keeping with our tradition, these will focus on explicating one scene as an interpretive key for unlocking deeper interpretations of the episode’s themes. These articles will contain spoilers through the episode under discussion. This week, Ryan Sheely tackles “The Broken Man” (S6 E7).

Right in the middle of this week’s episode of Game of Thrones, “The Broken Man,” we see three scenes in which one set of characters visit the home of another character and make a request. In the first scene in this set, Jon Snow, Sansa, and Ser Davos successfully petition the 10 year old Lady Lyanna Mormont of Bear Island for her support in reclaiming Winterfell from the Boltons.  In the second, Jamie Lannister unsuccessfully attempts to convince the Blackfish (Catelyn Stark’s Uncle, Brynden Tully) to relinquish Riverrun without a protracted and deadly siege. In the final scene in this set, the Jon and Sansa #squad is back on the campaign trail in the North, this time at Deepwood Motte, failing to convince Lord Glover to join their cause. 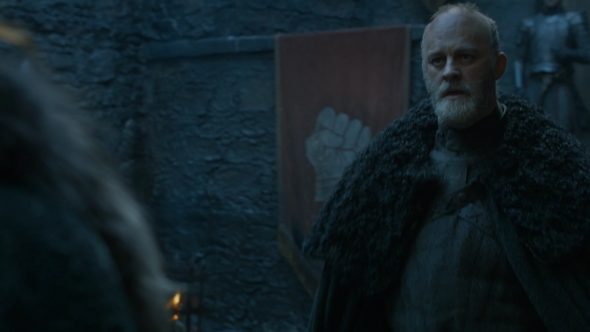 All three of these scenes explore the connection between houses—the family lineages that vie for power in Westeros—and homes— the physical castles that are those house’s seats of power.  In the two scenes in the North, Jon and Sansa go into the homes of houses who have been aligned with the Starks for generations and call on that oath to help regain their own home— Winterfell. This appeal to the oath of loyalty to the Starks is not persuasive to Lord Robett Glover who says “House Glover will not leave our ancestral home to fight alongside wildlings” and asking where Robb Stark was when the Ironborn took Deepwood Motte.  Loyalty of bannermen to the great houses they serve is a two way street— the bannerman have a duty to serve their Lord, but the Lords of the great houses have the duty to protect the homes of those who serve them. Because the Starks have not been able to provide this protection in any effective way since Ned’s death, Lord Glover prefers to take the protection of his home into his own hands rather than serve a House that may no longer be able to protect him. In his words, “I served House Stark once, but House Stark is dead.” 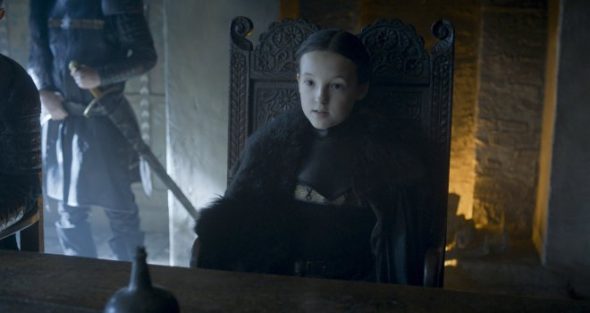 The pitch to the Lyanna Mormont, sassy tween ruler of Bear Island, almost crumbles under the weight of a similar counterargument. Although Jon and Sansa try to persuade Lady Mormont that “Rob is gone, but House Stark isn’t,” she immediately rebuffs their claim by pointing out that Jon is a bastard and Sansa has forsaken her Stark name by marrying into both the Lannister and Bolton families. Like Lord Glover, Lady Mormont resists getting pulled into someone else’s war, insisting that her responsibility as a ruler is to her home— Bear Island. However, Ser Davos ends up bringing her around by arguing that the real war isn’t between “a few squabbling houses,” but between “the living and the dead.” By reframing the quest not as one to just regain Jon and Sansa’s home of Winterfell, but a battle to save the shared home of the humanity from the Night King’s zombie army, Davos is able to reanimate House Mormont’s loyalty to House Stark. 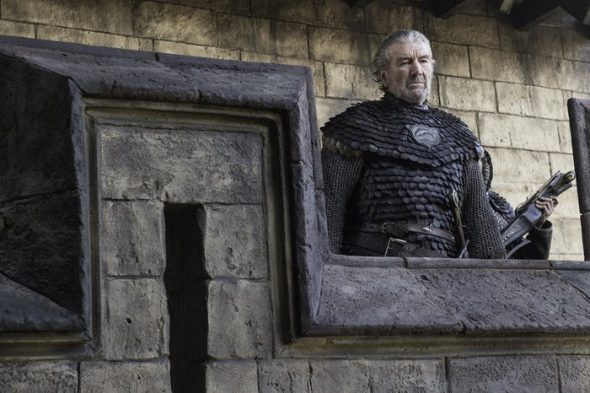 In both of these scenes, oaths and duty to use violence as protection are the connective tissue that link houses to their homes. This idea is also at the heart of the conflict between Jamie and the Blackfish. The Blackfish has retaken Riverrun because it is the ancestral home of the Tullys, who were the great lords of the Riverlands for generations. However, as part of the deal between Tywin Lannister and Walder Frey that culminated in the Red Wedding, the crown granted control over the Riverlands and Riverrun to the Freys. From the perspective of that pact, the Blackfish is “trespassing” by violating the agreement between the crown and the Freys. From the perspective of the Blackfish, Riverrun is his home and he’s not interested in any promises that Jamie will make to him about the safety of him and his men. Tellingly, the Blackfish rejects Jamie’s attempt to broker a deal by saying that “Bargaining with an oathbreaker is like building on quicksand.” Once again the connection between houses, homes, and oaths is clear— the physical safety of a home like Riverrun and a great house like the Tullys depends as much on promises and allegiances as it does on physical fortifications. 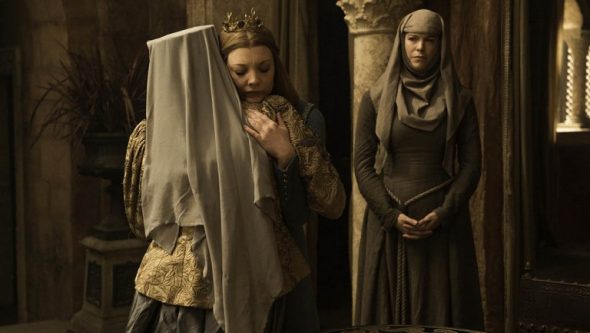 Outside of the North and the Riverlands, the linkages between duty, house, and home are also visible in King’s Landing. The High Sparrow menacingly reminds Margery of her duty to bear an heir for King Tommen and “preserve” House Baratheon (nevermind that everyone, including the Sparrow, knows that Tommen doesn’t have an ounce of Baratheon Blood). In the fanatical view of the Sparrow, the queen’s role is in the home, and more specifically in the marriage bed. In contrast, Margery’s conversation with her grandmother Olenna highlights Margery’s continued sense of duty towards House Tyrell.  While Margery cloaks her insistence for her grandmother to “Go Home” to Highgarden in the language of loyalty to her husband and their newfound faith, the hand drawn sketch of a Rose (House Tyrell’s sigil) signals that her marriage, incarceration, and apparent conversion have not severed her deeper loyalty to her family’s house and home. 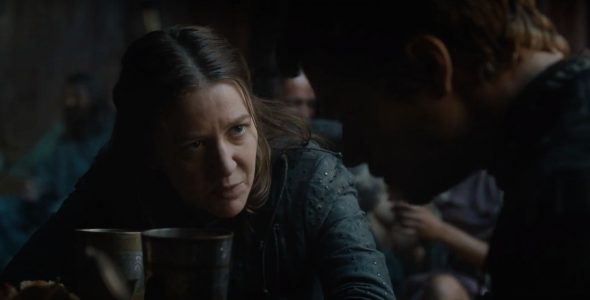 This set of themes around duty, houses, and home also connect to the homeward journeys of three characters: Theon, Arya, and the Hound. After being chased  out of the Iron Islands by their uncle Euron, Yara and Theon Greyjoy find themselves without either a house or a home (but surrounded by plenty of breasts and butts). However, even though their journey back to their home will be a long one and will likely take them through Mereen, Yara’s speech to Theon while force feeding him ale is her attempt to bring him home psychologically. If he can’t help her in her quest to retake their home, then he is failing her in his duties as a brother. As she puts it, “If you’re so broken that you’re never coming back, cut your wrists.” 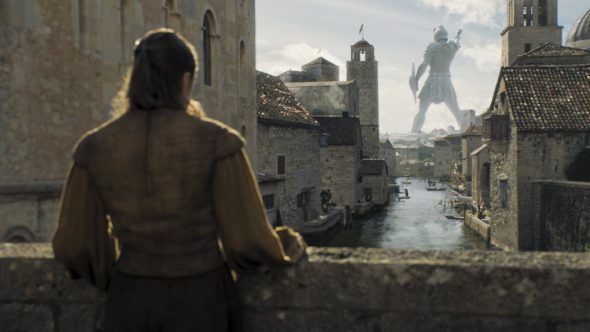 In Braavos, Arya is more than ready to drop the whole “a girl is no one” act and regain both her Stark name and some semblance of a home back in Westeros. However, as she stares past the Titan of Braavos, she is brutally reminded of the oath that she made to the Faceless men to serve the Many-faced God, when the Waif repeatedly stabs her in the gut.  Although Arya manages to escape, we last see her bleeding out as she stumbles through the streets of Braavos. 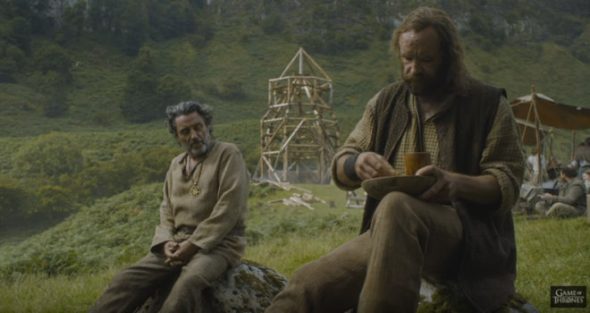 Speaking of characters who were bleeding out when we last saw them, the last big homecoming in this episode was the Hound (aka Sandor Clegane), who returned to the world of the living on the show after being severely wounded by Brienne and left for dead by Arya almost two full seasons ago. After the reveal in the cold open, we see Clegane living with a holy order, helping them to build a sept—a house of the gods. Septon Ian McShane (okay, he’s credited as “Ray,” but he’ll always be Septon McShane to me) insists that the Hound’s improbable survival is a sign that “Something greater than all of us has plans for Sandor Clegane.”  In the folksy sermon later in the episode, Septon McShane argues that “it is never too late to come back,” advocating for salvation through good works and building a new community free from violence and hate. In contrast to most other religious leaders in Westeros, McShane’s Septon operates by a code of ethics that allows for a high level of acceptance and tolerance, which offers a path towards a new home for the Hound.  However, when Clegane finds his entire religious community murdered by the Brotherhood without Banners and the Septon hung from the rafters of the Sept, the Hound grabs his axe, making it clear that he is indeed heading home, but that the road will be paved with blood.