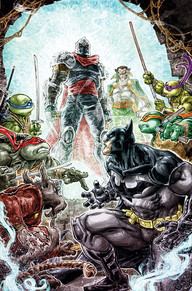 The final issue of this practically unbelievable crossover event consists almost entirely of a megabrawl between Batman and Robin and the Turtles and Splinter against Shredder, Ra’s al Ghul, and the newly-mutated inmates of Arkham Asylum. That’s right, The Foot Clan and the League of Assassins have joined forces, and after getting hold of a batch of mutagen they used it on all of Gotham’s most criminally insane, transforming Batman’s whole rogue’s gallery into the deadliest menagerie in all of comics.

Kind of the only problem I can see with this series is that it’s almost too perfect: it hits all the beats you’d expect a Batman/Ninja Turtles crossover to hit, all the beats you’d want such a series to hit, which can make it seem a bit predictable. But I can’t even really call that a complaint, because what kind of a complaint is “it does everything right”? This is a series that understands Batman, understands Ninja Turtles, and understands what the fans of both expect from a meeting between these iconic, beloved characters. The actual plot is almost irrelevant – although, thankfully, it doesn’t ever feel like an afterthought – because what we really want, obviously, is for Batman and the freaking Ninja Turtles to hang out and fight together, and that is what they do, and it is awesome.

By this point in the story, the Turtles and Batman have resolved their tensions and are fully on the same side. Again, something we all knew was going to happen but was extremely well executed. The Turtles have earned Batman’s respect by discovering his secret identity, sneaking their way into the Batcave, and fighting him to a draw. Donatello and Michelangelo were instantly on board Team Batman, as of course they would have been; Leonardo was convinced by Batman’s skills of deduction and martial prowess, and Raphael (the last of the Turtles to be won over) at last understands that Batman isn’t just a weirdo in a cape who likes to beat people up, but rather someone who fights crime in order to protect the families of Gotham City in a way that his own family was never protected. What this story does is go to the prime themes that unite these heroes – and their villains – and plays them like an expert.

Animality, of course, is another image system that pervades both properties, and so of course the climax of the story would have to hit that as hard as it can. And it definitely does that. So many characters in Batman’s world are named for animals – not the least of which being Batman himself, of course – but transforming Batman wouldn’t have been the right move. There already is a Man-Bat, after all. And Killer Croc appeared in the very first issue of this series. But at the risk of trivializing Batman’s rogue’s gallery, this comic mutates them – and to great effect.

The Penguin becomes, not surprisingly, a penguin. Bane becomes an elephant – and is super into it. Poison Ivy becomes a praying mantis, and does not like it at all. Mr. Freeze is fairly indifferent about turning into a polar bear. How anyone could be indifferent about being turned into a polar bear, I have no idea; I guess Mr. Freeze is just a bit too…cool? Plus raccoon Riddler, mandrill Two-Face, a crow Scarecrow (how’s that for irony?), and a really kind of terrifying cobra Joker who can’t wait to see what his new venom will do to his victims. Throw in Mad Hatter as a rabbit (well, a hare probably) and Harley Quinn as a creepy hyena and basically what the hell else could you possibly have wanted from this series?

Except, you know, more of it. As I keep saying, this hits all the necessary beats, but another one or two issues – or, like, maybe another four issues – could have given us a less compressed final battle, a longer sequence with Shredder and Ra’s al Ghul bonding over being crazy awesome ninjas, and more of those glorious character moments like Donnie geeking out over the Batmobile and Mikey sharing a pizza with Bruce.

An Extended Edition is in order here. Or a sequel. Batman faced the Predator four times! It shouldn’t be beyond hope for us to see the Dark Knight meet the Heroes in a Half-Shell again someday.

Where to Start: Batman / TMNT #1  Time investment: five issues
Recommended if you like this: Read this again