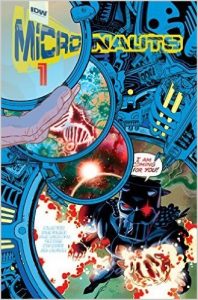 Okay, I was never really into Micronauts. A little bit before my time, if you can believe that. So maybe it’s my problem that I didn’t really get – and couldn’t get into – this comic. To me, it seemed like a bunch of strung-together scifi cliches that didn’t quite add up to anything. It goes about introducing the characters, their origins and powers and their relationships, and it starts into a story about bounty hunters in space and some kind of planet-destroying catastrophic energy wave, but what it doesn’t do is give us any sense of how this property is supposed to distinguish itself from all the rest of the toys. Again, feel free to correct me but isn’t the whole premise of the thing that they’re small? They’re from a tiny universe and that makes it possible for them to interact with larger-scale universes and that’s cool. Is that not the premise? It’s entirely possible that it isn’t, and I’m the one who is wrong, and I’m looking in this comic for something that isn’t supposed to be there. But Micronauts #1 just didn’t do it for me.

Where to Start: This is #1!  Time Investment: None!
Recommended if you like this: The Sixth Gun 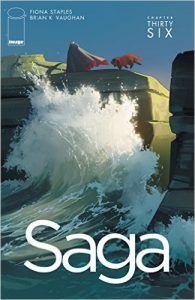 The close of Volume 6 of Saga is full of big endings and big beginnings. Shifting alliances is what this series has been about from the start – well, one of the things that it’s been about – or maybe shifting associations is more accurate, and there’s a lot of those in this issue. Basically, lots of Saga is about taking very different kinds of people and throwing them into situations together, either through pure (and often unpleasant) circumstance, or in order to help each other achieve a common goal. Mostly that common goal is family. And so here we see a family reunited and then redivided almost as quickly, with the promise of increasing unity to follow. We also see the damage that severed families (and severed limbs!) can do to a person’s psyche. Long story short, Hazel is rescued from the prison for enemy non-combatants, and what Marko and Alana actually do next is kind of very unclear (and we’ll have to wait so long to find out!). Meanwhile, The Brand seems to be the next big threat to that family’s alliance with The Knight Formerly Known as Prince Robot IV. I’m kind of not convinced by Klara’s decision in this issue, and I’m interested and a little concerned about where they’re going to go with the Petrichor character, but I’m definitely on board for the rest of the ride in this wooden spaceship we call Saga.

Where to Start: Saga Deluxe Edition Volume 1  Time Investment: 35 issues, but worth it
Recommended if you like this: Paper Girls

At its best, Sex Criminals is what the focus group guy from that one Simpsons episode would describe as a realistic, down-to-earth comic that’s completely off the wall and swarming with magic robots. And this issue is Sex Criminals at its best. It manages to push the plot further along, advance the depth of Jon and Suzie’s relationship, take on some really serious and realistic sexual insecurity issues with the book’s most vanilla supporting character, Robert, while making the manifestation of his insecurity both relatable and obscenely hilarious, and throw in some fun metafiction at the same time (are you paying attention, Chuck Palahniuk? I love you but Fight Club 2 was not your best work). It’s got sex, superpowers, and deep psychological trauma in perfect proportion. Plus the best letters column in comics.

Where to Start: Big Hard Sex Criminals Time Investment: 14 issues
Recommended if you like this: Casanova Volume 1: Luxuria 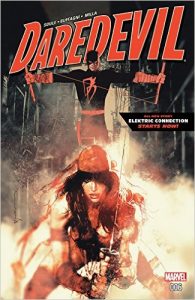 Here, with the reintroduction of Elektra into Daredevil’s life, the book starts really exploring the consequences of Matt Murdock’s worms getting crammed back into the secret identity can. We still don’t know how exactly he managed to do it (though I have my theories), but we now learn that it really is everybody except for Foggy Nelson who no longer remembers that Matt Murdock is Daredevil. So that when Elektra shows up in the courtroom gallery at an arraignment where Matt is requesting significant bail be set for the accused, he has to pretend that he doesn’t know she’s there. Of course as Daredevil he can detect her by the rhythm of her heartbeat and by her scent of “evergreen, and blood, and the air before a storm.” But as far as she now knows – as far as he wants her to know – he’s “just a blind lawyer she used to date.”

The laser-guided amnesia thing is a trope that’s used fairly often but less frequently are its implications investigated in much depth. Buffy the Vampire Slayer did it, but it was only (“only”) that Willow had been erasing Tara’s memories of the fights they had over Willow’s increasing dependence on dangerous magic; and while that mental assault and betrayal, when discovered, rightly ended up destroying their relationship, the stakes for Matt are even higher. The entire world knew that he was Daredevil, but for most of those people it didn’t much matter. Now, with that knowledge erased, it’s not only his enemies but also his friends who have lost his identity – all his friends, except for Foggy, and also all his exes. Even apart from the moral issues of tampering with people’s memories (let alone whatever Matt had to do to make it happen), Matt himself doesn’t understand, and can’t really find out without blowing his cover, what kind of cognitive dissonance the memory-wipe has made necessary in the minds of his victims. As he puts it, “[Elektra] was with Matt Murdock…and she was with Daredevil…at the same time. I did one small thing – put my secret identity back in the box – and suddenly she’s a cheater. Her, and the others – [his ex-wife] Milla, Natasha [Black Widow]. One small thing. Sure, Matt.”

This is why I’m loving Soule’s run as writer for Daredevil. Of course I also loved Mark Waid’s run before this, and Andy Diggle’s before that, Ed Brubaker’s before that and of course Brian Michael Bendis’s truly defining run before that. Man, Daredevil has had a really long string of nonstop excellence lately. The book has just been great for almost twenty years now. I don’t think that’s happened in a mainstream superhero book since, what, Chris Claremont’s run on X-Men from the 70s to the 90s? Even then, that was one guy with a vision for these characters. Daredevil has gone through five writers in that same time and they’ve all been gold. That has to be some kind of record.

Anyway, sorry, I got distracted. The reason I’m loving Soule’s run thus far is because he perfectly balances and interweaves stories – effortlessly dancing from courtroom drama to martial arts action to romantic thriller – and paces the development of themes and plot perfectly, teasing out the longer threads in a way that’s tantalizing but not sadistic, while never letting the reader get bored with the shorter-term events. It’s masterful, really.

Where to Start: Daredevil #1 Time commitment: 5 issues
Recommended if you like this: Daredevil by Bendis and Maleev Ultimate Collection Volume 1

2 Comments on “Sex, Superpowers, and Deep Psychological Trauma in this Week’s Comics”