Matt Belinkie: I love the Marvel movies. My son is totally obsessed with Infinity Wars. He’s absolutely bought in to the concept of 15 movies building to the greatest battle ever put to film. I hope it’s halfway up to his hopes. And I was surprised how strongly he roots for Captain America over Iron Man. I would honestly expect any kid to root for Iron Man, who is funny and has all the cool toys. But from what I can tell, kids LOVE Captain America. Not exactly sure why.

Why is Captain America popular in 2016? He’s harder for me to grasp than Superman, Spider-Man, or any of the other big ones. Is it straight-up Patriotism? 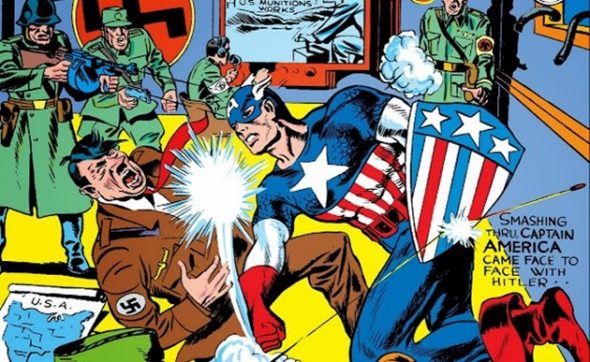 Matt Wrather: I guess there are a bunch of assumptions we make in this area which it’s worth unpacking. One I heard recently on a Bullseye podcast I was listening to is that superheroes are wish-fulfillment fantasies for boys at various stages of development. (I’m bracketing entirely any discussion of the sexism involved, except to note that there’s sexism involved and that, though far too slowly, it will be gradually remediated in the fullness of time.)

Superman is for latency children: post-oedipal, pre-adolescent boys for whom the feats of strength and the moral certainty—or maybe more something like moral authority—are aspirational. Batman is for when adolescence hits. He’s obsessional and wounded; he feels compelled to hide; but he manages to turn both of these liabilities into assets. Also there’s girls, and they’re totally on his bat-jock, but they’re, like, whatever NBD, and he doesn’t have any anxiety about forming long-term attachments.

I wonder if Belinkie’s original description of Iron Man—“he’s funny and has all the cool toys”—isn’t actually more appealing to us than to a ten year old, because those things—charm, wealth—are markers of success in our circles.

(2) At a slightly deeper level, Captain America has motivations which are relatively straight forward.  It’s not to say he’s a “simple” character, but his motivations tend to be relatively easy to understand.  He sets a goal, and he accomplished it.  As a 10 year old, I would have been all about that.  And been entirely uninterested in “conflicted-hero-man.”

Wrather: Yeah, that seems right to me. I think the shield is a rich piece of iconography that can be read in any number of ways, but one thing it provides is novelty: A fight where your weapon is a shield is going to involve a lot of imagination and ingenuity—there are a lot of ways you can turn, spin, flip, ride on, share, throw, and catch the shield. 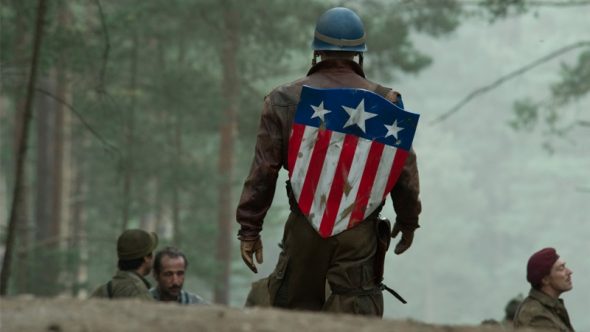 I guess I wonder if it’s Cap in general or the situation in Civil War in particular that our straw kids emphasize with. I remember becoming gradually more and more aware of adult authority and how it wanted to interfere with me doing fun things. And submitting to the arbitrary control of a quasi-governmental body, which is the point of conflict the trailers really hit hard, just sounds like a drag.

Adams: I have a strong suspicion that the kids who like Captain America would have been on Team Leonardo when Teenage Mutant Ninja Turtles was popular.  Captain America leads, Iron Man does machines.  And I think that might help explain things somewhat – Steve Rogers is a leader, but he’s not a manager.  Which is fine when you’re running a small unit of commandos, or the Avengers.  But as soon as your team becomes part of a large bureaucracy, that matters a lot less.

And to the right kind of adolescent, leadership sounds like fun – you get to make plans and come up with traps and then tell all your friends how to get the job done.  But management is always a drag.  Iron Man has never been one to submit to authority, but he knows machines – and what is a bureaucracy but a large machine?

(Data point: Leonoardo was my favorite, and I’m 100% in the tank for Captain America in Civil War, even though I strongly suspect that Tony Stark is correct as a matter of sound policy)

Richard Rosenbaum: Hey, what do you mean “when TMNT was popular”!? Them’s fightin’ words!

Wrather: Ben, were you in Student Government? (BTW I’ll play — I was Donatello all the way, both for the technical knowledge and for the excellence of his weapon, which for simplicity, range, and acrobatic potential was clearly superior to all the rest.)

Belinkie: I was Raphael, because of his sarcasm and pessimism. I was a fun kid, obviously.

Adams: Yeah, but are you Team Iron Man or Team Cap? (And OBVIOUSLY I was in student government)

Belinkie: Well, I’m actually trying to avoid trailers nowadays, especially for movies that I’m 100% sure to see, so I don’t really know what the conflict is. Maybe this is missing the point, but I will pick a side based on who I actually agree with. I think since this is technically a Captain America movie they’ll make his side more sympathetic. In the original comic book mini-series, the issue was the government registering superheroes, and not letting people run around beating up criminals willy nilly. Cap was AGAINST this, which seems counter-intuitive for an agent of SHIELD. It’s a position that only makes sense if you don’t trust the government one little bit; sort of like being against all background checks for gun sales. In that story, Captain America was the “Republican” (personal liberty and limited government) and Iron Man was the “Democrat” (more bureaucracy and regulation). 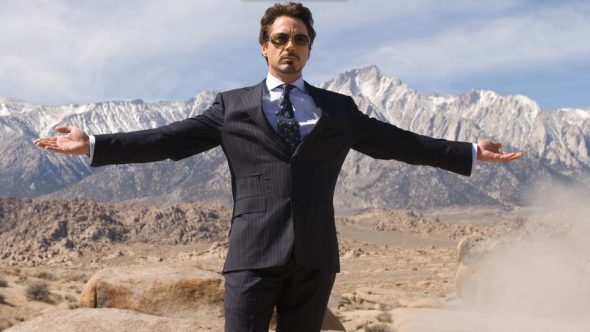 But I’m ducking the question, which is about which character I prefer. I think I’m Team Iron Man, both because of his wisecracking style (can’t wait to see him and Spider-Man together) and because of the inherent mutability of his powers. He’s one superhero that can learn new tricks in every film without it feeling like cheating. I loved his fight against the Hulk in the last Avengers film.

On the other hand, Captain America is exciting precisely BECAUSE his powers are limited. He’s not going to develop laser vision. Since he doesn’t have the option of scaling up his power level, he has to use more creativity, stealth, teamwork, etc.

John Perich: I think this demonstrates how much the goalposts have moved in the last 15 years (the Chitauri Changed Everything, Never Forget, Bald Eagle Crying on a Flag) in that I’d swap the “Republican” and “Democrat” labels as you have them, Belinkie.

In any case, in the Civil War conflict, Iron Man represents Authority, and it’s a rare 10-year-old that gets along with Authority. Sure, kids may love their parents – I’m sure your son loves you plenty, Matt! – but parents are also the obstacle to being able to play video games for 100 hours straight or eat all the Oreos you want. A child’s life is defined by eking out as much space as possible within the boundaries that Parents, Teachers, and other Well-Meaning Grownups erect. So you’d have to really, really like Iron Man’s gadgets to side with him on this one.

Belinkie: But in every other Marvel story, isn’t Captain America the one who represents Authority?

Perich: I can’t think of one where he has – where he represents The Man cracking down on The Underclass. When I think of superheroes who represent Authority, I think of Robocop. Captain America goes after enemies of the state (sometimes; he’s had a pretty varied career), but the fight is usually depicted as being on equal footing. I don’t see that as “Authority”. 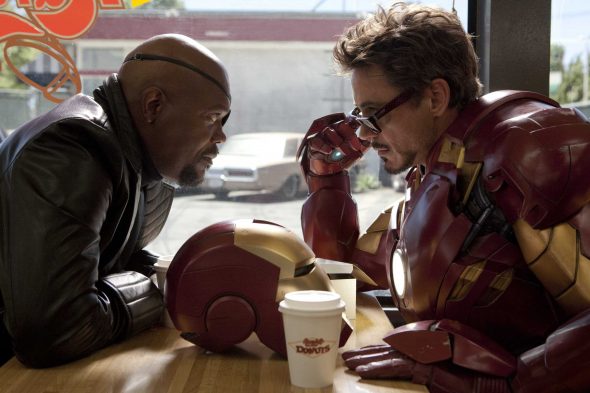 Belinkie: I suppose that SHIELD is depicted less as the long arm of the US Government and more as Nick Fury’s personal army. In the first Avengers movie, we see him talking to some shadowy bureaucrats, but largely ignoring and defying them. Captain America describes himself as a soldier, but he doesn’t actually take a lot of orders.

Fenzel: I was team Michelangelo, and I totally get Captain America over Iron Man. Despite his nationalism, Captain America comes across as more fun and independent, more exciting, and bolder and more sincere in his self-expression. There is a comic book Captain America who is more of a dullard, but that’s not as present in the Chris Evans version, who seems to be vividly emotionally invested in the world.

Another way to think about it is Captain America sees the world with new eyes and wants to make it better. Iron Man sees it with old eyes and wants to correct its failures. Children are not particularly invested yet in the Failures of the World.
Also Captain America gets to be bossy based on his merit (he does good stuff well), his energy, and his personal impulse. Iron Man gets to be bossy based on his money, his intelligence (he is smarter than you), and his sex appeal. One of these sets of values I would think would appeal more to children.

Captain America has sort of a reverse-Superman problem in the Avengers versus the Justice League: the other characters are so much more powerful than he is, it doesn’t quite make sense for him to be the leader. The comics will usually explain this as him being a grizzled master strategist, but this has never sat right with me. I think the movies nail it much better – superheroes follow Captain America because he’s inspiring, he’s trustworthy, he’s fun, he’s charismatic, he’s just totally balls-out on the costume, he’s got the big shield which is like a flag – and he really does elevate his role as a leader above merely managing what the team does or being the biggest fish and steering everything in his interests.

Captain America brings a sense of collective success to the table. You get to have some of what he’s having, which seems like pretty dope shit. And Captain America validates the reality of obedience with the desire for independence. He appeals to an abstract authority and set of values he still follows and subordinates himself to, and he draws strength from it to question other authority as necessary. So when Captain America questions authority, it means something, because he’s not above following something that deserves it.  I think kids identify with that, before they grow up and either want to follow nobody and nothing or follow out of fear something they may not even believe in.

Jordan Stokes: You know, the Robert Downey Jr. Iron Man is maybe more of a Raphael than a Donatello. Sure he’s an inventor, but can you really imagine him being like, “Hey guys, I made us an awesome van to drive around in!”

Of course not:  if they need an awesome van, S.H.I.E.L.D. will provide them with one. On the other hand, can you imagine him being like “Guys, I’m gonna be over here in my own corner of the plot being a wise-aleck and a loose cannon?”

Cool but rude. Just sayin’, is all. 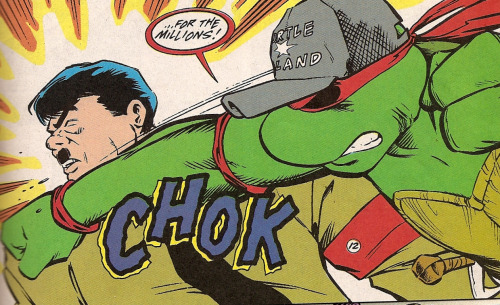