By now you know that Hollywood superhero blockbuster Batman v Superman: Dawn of Justice is almost total garbage. Boring, structureless, bottom-heavy, and relentlessly dismal, its worst sin is that it seems to understand what grounds the symbolic power of its title characters, but chooses to throw all that away in favor of letting us watch Bruce and Clark beating the crap out of each other – until, of course, they bond over the fact that their moms both had the same first name. BvS thinks it can get away with this by borrowing heavily from events in the characters’ continuity, particularly Frank Miller’s 1986 comic The Dark Knight Returns (action and dialogue from DKR are transplanted verbatim in a couple of places) and the 1992 Death of Superman. The problem is not that it took stuff from the comics – the best adaptations do exactly that. The problem is that it does this but empties those scenes of all their symbolic import, while, frustratingly, having earlier signalled that it knows perfectly well what they were intended to symbolize. That ends up making this into a Batman versus Superman movie that includes neither Batman nor Superman. Not really. 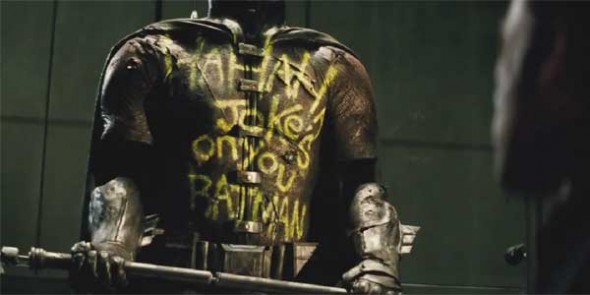 The movie’s plot, such as it is, goes like this: following the destruction wreaked in Metropolis by the battle with General Zod in Man of Steel, Batman is psychologically manipulated by Mark Zuckerberg – uh, I mean, Lex Luthor – into attempting to murder Superman using some recovered kryptonite.

Now, Lex Luthor’s hatred for Superman is something that the movie actually gets right. He lays out the prime paradox at the heart of all the good and introspective Superman stories (few as they may be) using a version of the classic Epicurean argument about the Problem of Evil: God is supposed to be both omnipotent and omnibenevolent, yet evil exists. So either God can eliminate evil but doesn’t want to, in which case He is not all-good, or else He wants to eliminate evil but can’t, meaning He is not all-powerful. In the absence of Actual God, the closest thing the DC Universe has is Superman. For all intents and purposes, Superman is the most powerful being in world and also claims to care about humanity and works to protect it. Yet the destruction and death that resulted from his fight with Zod (and various other forms of collateral damage) prove that Superman is not the perfect, shining hero that the world professes him to be. Luthor doesn’t object to Superman in principle; it’s just that Luthor’s narcissism gives him a deep-seated, pathological need to be the best. But as long as Superman exists, Luthor can never be the best – Superman will always be better than he is. The fact that Superman is worshipped by millions of people as a practically godlike figure despite being so clearly imperfect (unable to solve every problem and save every person no matter how hard he tries; as likely as not to incur massive collateral damage even when he does save the day) only serves to add insult to injury, infuriating Lex even further.

This is all solid ground – as mentioned earlier, the best Superman stories are the ones that force Superman to confront the fact that he can do anything but he can’t do everything, he necessarily has to be selective in his heroism because he isn’t, after all, God; he needs to weigh his right to have a normal, fulfilling, middle-class, heteronormative, Mid-Atlantic American life with his duty to use his power to ensure that other people have the opportunity to enjoy that kind of life as well by fighting off threats to human life, liberty, and the pursuit of happiness.

Modern Superman is America by day, America as it sees itself, or at least as it wants to see itself: as inspirational, a symbol of hope, the strongest force in the world that uses its strength to defend truth and justice and generally put down bullies. The most glaring problem with Superman in Batman v Superman is closely related to the problem with attitudes toward America and American patriotism in general certainly since Vietnam and Watergate but especially since Afghanistan and Iraq: the majority of people don’t buy it anymore. This is the same reason that it’s so much harder to tell a good modern Superman story than it was to tell a good Golden Age or Silver Age Superman story. Superman is visibly, demonstrably good. He’s unequivocally and publicly good in a way that is meant to inspire goodness and optimism in all those who benefit from his goodness. And that’s what makes Lex Luthor’s hatred of him so twisted: Luthor is incapable of sharing other people’s happiness because he is himself incapable of happiness so long as he is not the center of attention.

Luthor is almost more heroic than Batman in this movie, because in a world where Superman is this dark and this uncertain, Batman must be even darker, opaquely resolute. And that reading of these characters simply doesn’t make any sense. Ironically, it’s Wonder Woman – whom creators have had even more difficulty making interesting in the last few decades than Superman – who shines in this movie, despite (or maybe – but I hope not – because of) her very limited screentime.

The problem with Superman in Batman v Superman is that from the perspective of modern audiences, Luthor is kind of right. Not that the movie portrays him as being right (it doesn’t), but that there no longer seems to be the kind of capacity for optmism and unapologetic goodness in the world that Superman represents. When we think of Superman, we think of that Golden Age or Silver Age Superman: the one who lifts cars off people, who fights corporate corruption and punches Hitler in the face. With the Superman we get in this movie, we’re told that he’s worshipped as a god, but the only visible proof of this is a statue in Metropolis Town Square, a bunch of people holding up pro-Superman signs outside congress (right along with at least as many people holding anti-Superman signs), and some South American villagers who kneel before him after he saves one of their children from a fire. Besides that, every we see indicates that everybody hates Superman. They blame him – not Zod – for the destruction in Metropolis, they don’t trust his motives, and most of all they don’t believe anyone should have that much power. 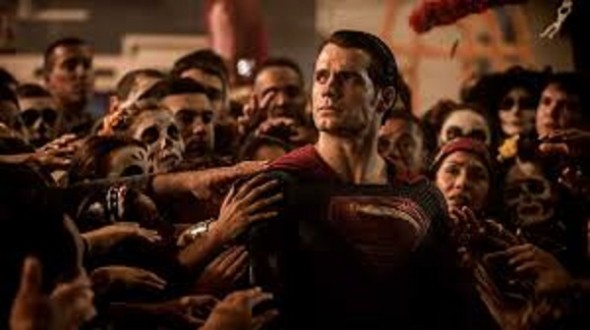 Doomsday, who shows up at the end of the movie for no reason, is notorious in the comics for being the guy who killed Superman. A mindless killing machine, the result of Kryptonian genetic experimentation, Doomsday hates all life – particularly Kryptonian life – and destroys it whenever he can. The Death of Superman storyline represented the 1990s transition into the ascendancy of antiheroes like Wolverine and The Punisher, triggered in part by Frank Miller’s Dark Knight Returns as well as Alan Moore’s Watchmen, which deconstructed the superhero tropes and problematized the question of what kind of person puts on a costume to commit extrajudicial punching. Superman – the Superman we think of when we think of Superman – had to die, and he had to die at the hands of the relentlessly violent spawn of the same civilization that sent him to Earth. So that we could have a world without Superman for a little while, and then a world with four Supermans, none of whom were the real one, and then the real one comes back, only different, because of course he does. Killing Superman was a marketing ploy, but also symbolized the descent into darkness and cynicism that superhero comics were taking. It’s a turn that we haven’t entirely escaped from, and rebooting Superman into a dark and complicated figure in opposition to everything that the character has always stood for is the exact opposite of what DC ought to have done with him – and the opposite of what they should have done with him in Man of Steel and in this movie, and another reason why Doomsday didn’t belong in this movie either. 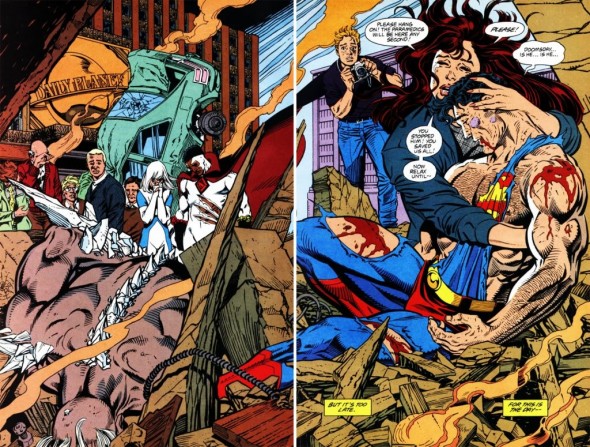 In Batman v Superman, Batman hates Superman (having not met him) for the same reason everybody else does: Superman is more powerful than anyone and answerable to no one; his very existence is a danger because if he ever has a bad day he could wipe out humanity without breaking a sweat. This makes it incredibly easy – contemptably easy – for Luthor to manipulate him into trying to take out Superman and make him think it was his idea.

In The Dark Knight Returns, the comic from which most of the actual fight between the Man of Steel and the Caped Crusader is drawn, Batman is very clear about the reasons for his disdain: “You always say ‘yes’ – to anyone with a badge – or a flag…It’s way past time you learned what it means to be a man.” Having never really been defeated, Superman doesn’t have the humility that comes from knowing how fragile the physical body is. It’s not that he’s arrogant, but he believes that everyone would do what he does if they could – he needs to believe that – and Batman wants to show him that actually feeling your own profound vulnerability in the world provides a level of insight that Superman has never had the opportunity to experience. Batman wasn’t trying to kill Superman here, he was trying to teach him a lesson. And he does that: he lays Superman out, albeit only with the aid of powered armor and a kryptonite-tipped arrow, and only after Superman has been significantly weakened by absorbing the fallout of a Soviet-launched nuclear weapon. 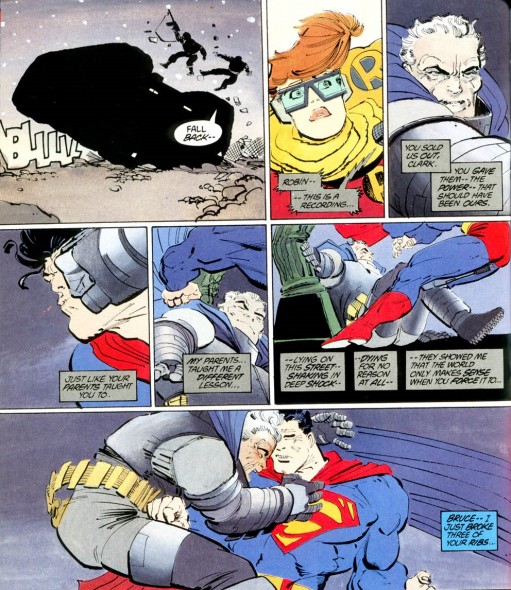 BvS has Batman hating Superman from the first minute of the movie because Superman is better at being Batman than Batman is, basically, and he can’t stand that. Whereas in the comics, Batman (the real Batman) disdains Superman (the real Superman) for having too much blind respect for authority, for sticking too close to the rules, for working clean and in broad daylight for all to see. For daring to be an optimist. But that isn’t the Superman that we get in this movie. A good Superman movie would have shown us how a powerful figure with the best of intentions can triumph and inspire people to optimism about the future despite the inevitable collateral damage that’s the consequence of the fight against evil. Then, once that’s established in Act One, you throw in Batman in Act Two, who fights under cover of darkness against corrupt cops as well as organized crime, union bosses right alongside sociopaths dressed as clowns, who is cynical about his mission to fight evil, who knows that he’ll never really win, that he’ll die trying, but does it anyway, not because he loves humanity but because he wants revenge and likes to see bad people suffer. The Batman that is night to Superman’s day. Because it goes so much against the prevailing attitudes of the early Twenty-First Centure, that is a much harder movie to make than this one. But at least it could have been good.

6 Comments on “Not Batman v Not Superman”