Please enjoy this guest post by Lindsay Gibb – the secret word is “ambiguity!”

Being blessed with new Pee-wee Herman material in 2016 isn’t just something for hardcore fans to thank the nostalgia gods for. In fact, despite some critics’ assertions that the new Pee-wee film — Pee-wee’s Big Holiday, which available on Netflix as of March 18 — is only for old fans who want to see Paul Reubens do the same things over again, Holiday is not just a rehash. Pee-wee is still, fundamentally, speaking to kids and adults who enjoy some silliness with their embrace of outsider culture.

Critics have largely looked favourably on the new Pee-wee material, but those who don’t enjoy it don’t just seem to have a difference of comedic tastes from those of us who love Pee-wee. They get some fundamental aspects of Pee-wee’s allure completely wrong.

The key issue they’re getting wrong: that Pee-wee should grow up already.

The ambiguity of Pee-wee’s age is what makes him relatable and is nearly the only reason that we have a new Pee-wee movie in 2016. His ageless nature is what makes Pee-wee an enduring (and endearing) character. Look at SpongeBob: can you identify his age? He has a job and a house, just like Pee-wee (in fact, they’re so similar that Pee-wee is also a fry cook in the new film), but he also reads as a child because all he does is play. Only adults who can no longer reach that inner silliness could get hung up on how “creepy” it is for a 63-year-old man to be viewed as a boy. Kids, on the other hand, can still identify with Pee-wee’s rebellion. 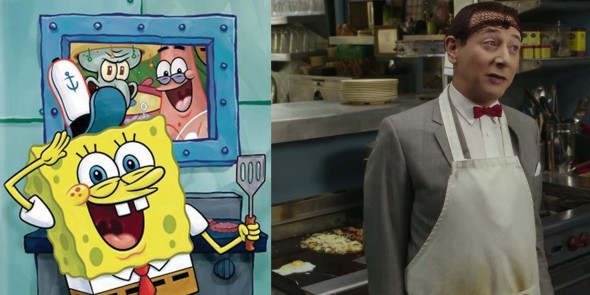 In a 1988 issue of Camera Obscura, Henry Jenkins III studied the reactions of his 5-year-old son and his kindergarten-aged friends to Pee-wee’s Playhouse. In the course of Jenkins’ study he asked parents what they looked for in a good children’s program and they said they wanted their children to watch shows that have a moral or educational point. “We have normal concerns about sex and violence and nonsensical shows,” said the parents, with one child reporting that his dad “won’t let me watch that crazy show.” By watching Pee-wee, children are combatting adult norms. Likewise, by being Pee-wee, Reubens questions our expectations of how a human should act at a certain age.

In our first on-screen introduction to the character, Pee-wee’s Big Adventure, Pee-wee is focused on toys and, in particular, his bike. He has no time for (or interest in) things like a relationship with a girl. In Playhouse, he plays all day and learns where babies come from from the King of Cartoons. But then, in 1988, we were given Big Top Pee-wee, a movie where he’s engaged and cheats on his fiancé with a woman from the circus. It just didn’t work. Pee-wee’s age must be ambiguous for us to believe in him.

His engagement and infidelity with two women in Big Top broke another rule of ambiguity that makes Pee-wee work: his sexuality.

The presence of an ambiguous Pee-wee rejects the very idea of one “normal” by not only behaving in a childlike manner, but by stretching gender norms by having no anxiety around dressing like a girl (like in Big Adventure where he disguises himself as an escaped convict’s wife and then continues to wear the outfit because he’s so comfortable in it) and not concerning himself with heteronormative behavior (such as when he cuts in on a dance between Miss Yvonne and Tito in Playhouse only to turn and dance with Tito). He also introduces characters of varying backgrounds, gender norms and sexualities without dwelling on their differences. Like a child, Pee-wee doesn’t question the differences in his friends, he just wants to be friends with anyone who is fun to play with.

Like a kid-friendly John Waters or David Lynch, Pee-wee’s road trips pick up that skewed take on mid-20th Century Americana and affection for “weirdos” and makes the people we meet exciting, dangerous and, in the end, harmless. Large Marge scared the shit out of a lot of kids in the 1980s, but she ultimately just drove Pee-wee to his next destination. Nothing bad happened to him when he wooed blood-thirsty bikers with his dancing skills. At the beginning of Big Holiday Pee-wee dreams of being best friends with an alien. Like Roger (the monster who visits the Playhouse and makes friends with the group once they all learn the lesson not to judge a book by its cover), the fact that Pee-wee’s new best friend didn’t “fit in” on Earth didn’t stop him from wanting to be friends forever. In Pee-wee’s world, anyone can be friends.

Pee-wee’s most literal message is that difference should be embraced, not feared. 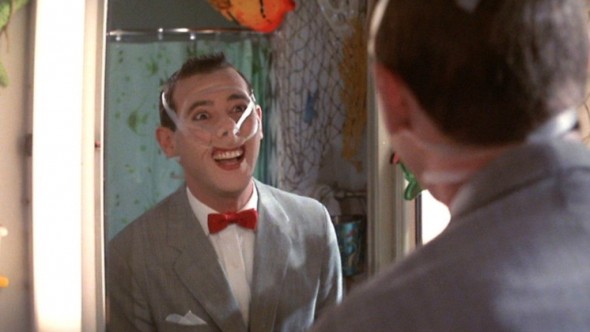 When Miss Yvonne asks Cowboy Curtis out for a date on Playhouse, no issue was made about interracial dating. Rather, the only anxieties are sexual: Cowboy Curtis has never been on a date before and needs help figuring out how to behave. When Pee-wee is learning Spanish from Ricardo or when the Spanish-language cartoon El Hombre made its appearance towards the end of Playhouse’s run, there is no English translation (nor do we get a translation in the new movie when Pee-wee and Joe Manganiello exclusively speak Spanish to each other in Pee-wee’s dreams). Thus Pee-wee creates an equality of output: Spanish speakers don’t get a translation of the English dialogue so why treat English speakers like the preferred audience?

Sometimes the presentation of “difference” is a little off — such as the delivery of an Asian child in Native American dress in the first season of Playhouse — but as Constance Penley argues in another 1988 Camera Obscura article on Pee-wee, the show is creating a “dizzying presentation of difference” that “shows a sharp understanding of how one might go about reordering (attitudes toward) difference….”

At every stage of the creation of Pee-wee’s identity, critics and academics have theorized about the queerness of his output. Even today, with the release of Pee-Wee’s Big Holiday, Buzzfeed’s Louis Peitzman wrote an astute article about the relationship between Pee-wee and Joe Manganiello being the queer love story we need right now.

Before Big Holiday it was usually clear that Pee-wee was not interested in girls (only usually because of the Big Top Pee-wee gaff). While girls flirt with Pee-wee in other incarnations (Miss Yvonne tries and fails to snag a kiss while playing house; Dottie attempts to get Pee-wee to take her to the drive-in in Big Adventure but he says “There are a lot of things about me you don’t know anything about Dottie. Things you wouldn’t understand. Things you couldn’t understand. Things you shouldn’t understand.”), it’s never explicit whether this disinterest is because Pee-wee is a little boy or because he is gay. Most likely it’s both. In Big Holiday, though, the latter is made much clearer than ever before.

“[C]ategorizing Pee-wee and Joe as ‘just friends’ would be, at best, a euphemistic solution to a relationship that’s deliberately vague but undeniably queer,” writes Peitzman. Thus exemplifying the beauty in the ambiguity, and lasting importance, of Pee-wee. Pee-wee’s Big Holiday can at once represent discovering ones sexuality and making new friends. The inclusivity Reubens created with Playhouse continues to be of utmost importance today. He can be everything to everyone. Pee-wee always does his best not to leave anyone out.

Lindsay Gibb is a Canadian writer, editor and librarian who writes about zines, film, TV and, mostly, Nicolas Cage. She is the author of National Treasure: Nicolas Cage from ECW Press’ Pop Classics Series. Find her on Twitter @lindsay_gibb