At Overthinking It, we appreciate that life is chaotic and difficult, and that you could probably benefit from expert, on-demand advice to guide you through life’s challenges. That’s why we’ve created According to Ziggy: a website that brings the wisdom from Ziggy, the supercomputer behind Project Quantum Leap, into the palm of your hand.

Need to decide whether or not to accept a date from your Tinder match?

Serving on a jury, and torn over how to cast your vote?

Debating whether or not to introduce your little nephew to Dragonball Z?

“Ziggy says there’s a 95% chance he’s gonna have some kind of a seizure.”

Give it a try: visit AccordingToZiggy.com to get advice on, well, anything! If you’re not satisfied by the results that Ziggy returns, just hit the “Reload” button (Ziggy is still in beta). 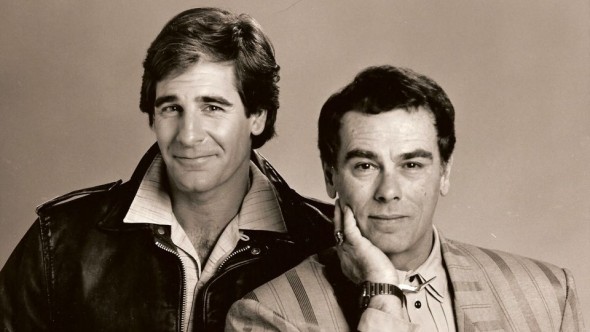 Way back in the fall of 2012, Matt Belinkie had a crazy but brilliant idea: what if we created a website that served up a random quotation from Quantum Leap’s “Ziggy”? After a few weeks, we had pulled the site together, but for reasons that still aren’t clear to us, we never told anyone about it, aside from a few tweets and a stray mention on the Overthinking It Podcast.

I guess we were waiting for the right occasion to do so. Thankfully, the quirks of the Gregorian Calendar have given us such an occasion: the Leap Day. We’ve repurposed today, February 29, 2016, into Quantum Leap Day, to give us an excuse to officially reveal According to Ziggy to the world, and to watch some Quantum Leap with our Full Harvey members via a virtual viewing party.

(Want in on the Quantum Leap Day viewing party and future online live-viewings with the Overthinking It writers? Sign up for a Full Harvey membership or upgrade your existing membership on February 29, 2016 and we’ll let you know how to join in on the fun!)

While we were at it, we also revisited the dataset of 177 Ziggy quotations to see what additional wisdom it might reveal. Here’s what we found:

Ziggy was consulted more frequently as the show progressed. 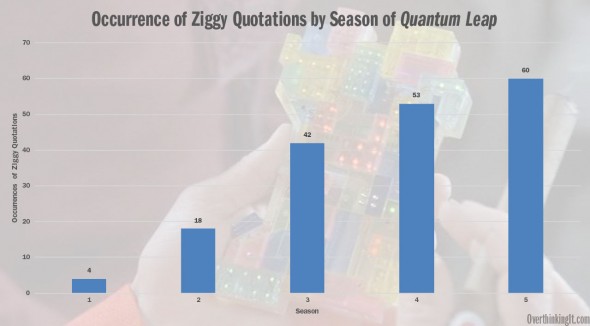 Even if you account for the shorter length of Season 1 (9 episodes, compared to 22 for each of the following season), there’s a clear upward trend in the occurrences of Ziggy quotes. Was Ziggy getting better at dispensing advice? Or were Sam and Al becoming increasingly dependent on technology?

Ziggy rarely gave a prediction with a quantitative probability. 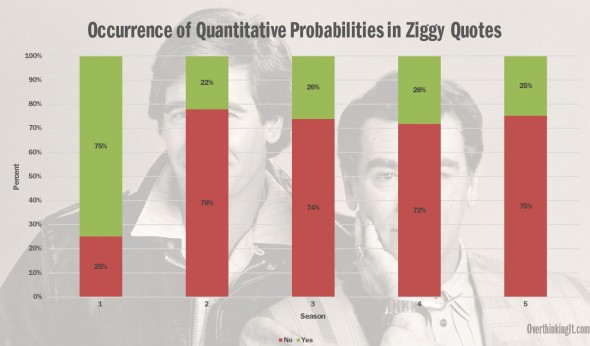 The first season aside, Ziggy gave a prediction  in terms of percentages or odds only 25% of the time. In the remaining 75%, Ziggy would make statements, give directives, or give predictions in non-quantitative terms.

Ziggy got more terse over time. 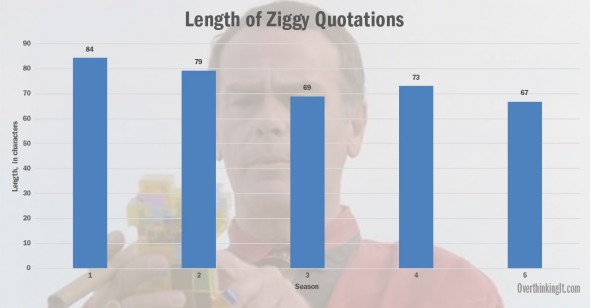 Ziggy’s quotes came in at an average of 84 characters long in the first season and decreased to 67 characters long by final season. The longest quote came from Season 4, Episode 21:

Ziggy’s sayin’ that you do have to go out and perform, because Darryl F. Zanuck is in the audience, and he’s gonna sign you to a contract, and then that’s how you meet your wife, and you have three kids, two girls and… oh, boy.

(By the way, this is the episode that suggests that Sam inspires a young Donald Trump to become a developer, which is highly unfortunate given current events. #MakeTimeTravelGreatAgain.)

Ziggy said a lot of things.

Feel like mining the greatest collection of wisdom ever to come out of a TV show? Here’s the dataset that powers AccordingToZiggy.com. Have at it, and let us know what you find in the comments!