Enjoy this Guest Post on the Political Economy of the Mario Franchise by Shane Reader!

In the short but distinguished history of video games, nobody has quite replicated the wallet-blistering, mouth-watering success of the Super Mario Series. We want Mario to be our tennis partner, to represent us at the Olympics, to draw us like one of his french girls, to fight pollution with us, to be our doctor, to party with us, and, most importantly, to save our perpetually distressed heads of state. The Mushroom Kingdom has, admittedly, always had its priorities a little confused compared to most industrialized nations. While Mario slogs through roadless wilderness, swims himself across uncharted oceans, and scavenges wild mushrooms for sustenance, Princess Peach has evidently fast-tracked the construction of tennis stadiums, soccer fields, lavish public parties, and massive gameboards large enough that humans can serve as playing pieces:  all projects that can best be described as bread and circuses. 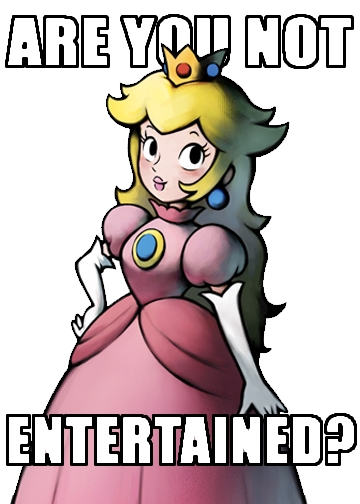 Upon more thorough investigation, this pattern seems to have been perpetuated across Princess Peach’s kingdom. Those not blinded by their post-Blue Shell fury may look up from their kart to see that they’re driving right through an unattended dairy farm, an unpopulated factory, or an abandoned gold mine, all vacant and idle like lonely film sets. The economic output of these facilities can hardly fuel the construction and maintenance costs of the extensive shopping malls, beach-side resorts or massive castles we also drive through! Indeed, from the top of these castles we can see, not more highways or factories or farms, but uninterrupted horizons of rolling hills, thick primeval forests, desert wastes, and nearly impassable mountains. Towns are scattered incongruously throughout, often connected to the capital only by dirt roads crawling with wild animals and vagrant Goombas. Even within these towns, there is rarely any evidence of economic activity save for a few local entrepreneurs with retail enterprises, and a few food service employees. Truth be told, most citizens seem content to spend each day standing still or pacing back and forth. It’s safe to assume that the Toads are not employed by the aforementioned factories and mines, or we’d at least see a few of them working there, rather than exchanging the same tired pleasantries while loitering outside the houses that they’re all somehow able to afford. More likely, they’re the recipients of an expansive welfare and living assistance program funded straight from Princess Peach’s castle.

Let’s speak for a moment about that castle. Of course the Princess lives in a castle:  she’s almost constantly under siege by a 12-foot tall tortoise wizard. As the leader of an insurgent militia of dissident turtles that seem to be based in ungovernable territories at the edge of the Mushroom Kingdom, Bowser is never unarmed. Sometimes he flies in on an over-sized airship, other times he builds his own castle directly underneath Princess Peach’s, and he’s even been known to swoop in on unexplained UFOs firing laser beams. What can we glean from this? First, no civilized nation has ever needed to increase its defense budget more than the Mushroom Kingdom, which continues to instead pour its money into stadiums and racetracks. Second, Bowser commands a more fully-realized economic force than Princess Peach. While she surrounds herself with a few guards, Bowser has an endless horde of loyal Koopa Troopas, an armada of flying warships equipped with cannons and weaponized exhaust pipes hissing fire, a series of heavily-defended fortifications and castles, a profitable chain of hotels, and, apparently, the means to keep them all content, crewed and stocked, respectively.

Bowser is the single largest employer in the Mushroom Kingdom. Considering how many thousands of Goombas Mario has stomped in his career, Bowser employs more entry-level grunts than Walmart. Even if they’re compulsorily conscripted rather than voluntarily enlisted (which may explain their fervor to run off cliffs and into lava pits), the Koopa Troop still requires a complex suite of administrators and middle-management personnel. No one’s saying that videogame-villain retirement plans are very good, just that somebody, somewhere needs to be keeping track of them.

And where does this money go, when Bowser appropriates funds for the maintenance of his armada or commissions another fortress? It goes to the factories and foundries that build his latest tinkertoy weapons of war, and from there (bear with us on this) back to the government of the Mushroom Kingdom. Are we to believe that Bowser pays the Toads of Toadville to willfully labor to create the machines of their own destruction? Of course not. Remember again that Toads are only self-employed or working in small businesses, not major manufacturing plants. So then, who owns the factories? Most likely someone who’s skilled at building massive capital projects despite a dearth of infrastructure. 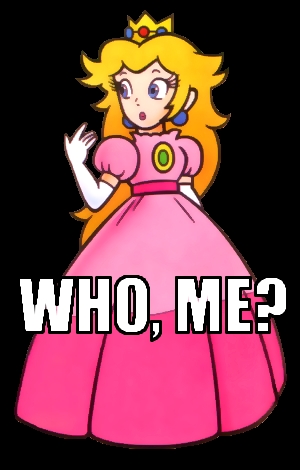 That’s right. But why would a ruler of a quiet people feel inclined to finance her kingdom with the blood money of the turtle that’s trying to imprison and forcibly marry her? Consider what happens when Mario stomps the last Goomba, grounds the last airship, levels the last castle and snatches the last coin. Bowser (debt-)finances another army, another armada, another castle, and the coins start flowing again. Those coins go directly from the manufacturing plants to Princess Peach’s treasury, and then to the social programs that sustain the lavish lifestyle of the smallfolk, who otherwise would be incapable of feeding themselves without working for a living. The Mushroom Kingdom is every neoconservative’s nightmare: a nation wherein almost every citizen is a lazy, unemployed welfare recipient, coddled by a nanny state, run by a despotic monarch, who is utterly unbeholden to “we the people.” 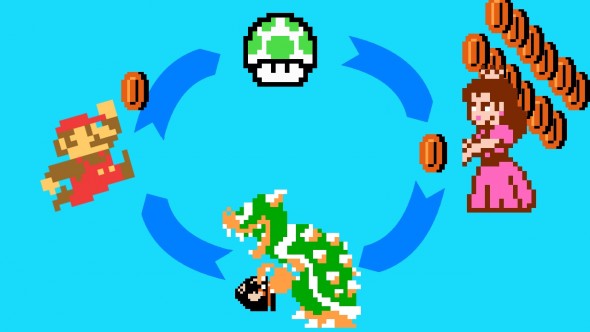 To understand why Princess Peach allows this (and even capitalizes on this), let’s summarize a typical fiscal cycle in the Mushroom Kingdom:

As the last surviving member of House Toadstool (the inevitable succession crisis is a topic for another article), the Princess’s ultimate duty is to ensure the safety and prosperity of her sycophantic and helpless little mushroom people. Observing the financial ebbs and flows of a country whose single largest employer is trying to abduct you, a country with no safe major roads, no visible higher education track for its citizens to lift themselves out of poverty (except a dubious medical doctorate program, where Mario learned that pills are the answer to every ailment), and apparently no more pressing diplomatic issues than tennis matches and go-kart racing, what is the best course of action to promote the needs of the citizens?

If Bowser ever truly gave up, disbanding his army or stopping his bulk orders of construction materials and ammunitions, the economy of the Mushroom Kingdom would suffer massive market corrections, likely fatal. Suddenly, the strange infrastructure of the Mushroom Kingdom starts to make sense. There are no highways, because it can’t be too easy to get to Bowser’s Castle. Otherwise, Mario wouldn’t be able to destroy as many secondary fortresses, collect as many coins, and sustain the economic bull market for quite as long. Princess Peach’s Castle has almost no defenses, because Bowser must be able to abduct the Princess to start the next economic rally. The cycle is so profitable that the coffers of the Mushroom folk and the Koopa Troop are literally bursting at the seams:  loose coins and valuables are scattered across the Mushroom Kingdom frontier. Mario dutifully collects these idle assets on his way to save the Princess, again, and every time he amasses 100 coins he re-injects them into the economy by purchasing a 1-Up. (This is effectively the Super Mario equivalent of quantitative easing). 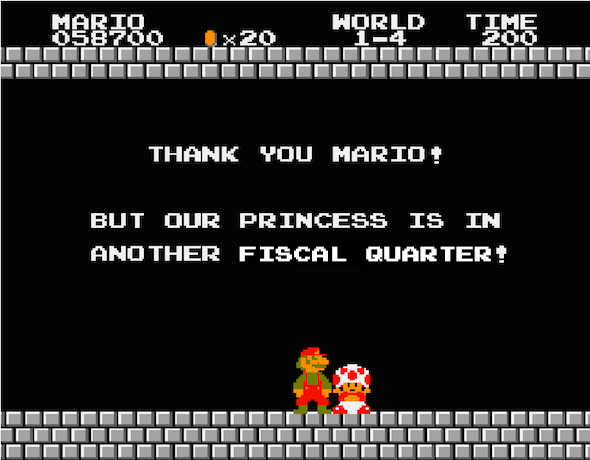 Libertarian economists in the audience are doubtless already emailing us the wikipedia link for the glazier’s fallacy. But in this case, the system obviously works:  for the past twenty years, Peach’s kingdom has only flourished. Just look at the castle picture from earlier in the article! (They can afford so many pixels these days!) On the other hand, we cannot assume that the system is without cost. For we might just as fairly say that the Mushroom Kingdom has spent the last twenty years in a state of constant war, imposing untold physical and psychological hardship on the population. The bread and circuses make perfect sense as a strategy to assuage the fears of the masses. No one has the time to notice the disconcerting percentage of the Mushroom Kingdom’s GDP that is based on war profiteering when you’ve got yet another life-sized board game to play, or another soccer match to watch. Certainly not us, the players. 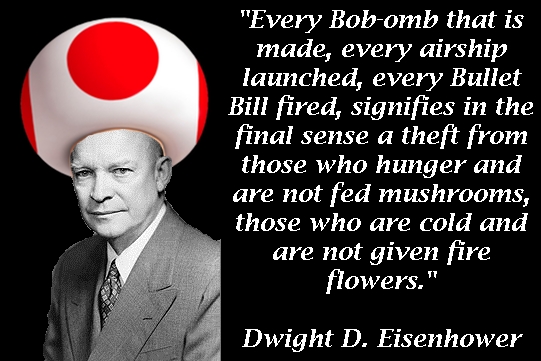 When President Eisenhower warned the American public against the unwarranted influence of the military-industrial complex in his last address as president in January, 1961, he would have been flummoxed to know that the nation most susceptible to the growing integration of military and economic power was led by a pink damsel-in-distress in a Japanese video game about plumbers. President Eisenhower, though exhorting Americans to be vigilant against the expanding political and economic power of industrial warfare, could not have known that his premonitions would manifest not in the country he governed, but in a kingdom of fungus people ravaged by an army of turtles and waddling windup-key bombs.

The Mushroom Kingdom is likely the most efficient example of a military-industrial complex in video games, as measured by its veneer of halcyon peace punctuated only occasionally by family-friendly platforming and minigame action. But it’s not the only video game world in which the economy is dependent on the exercise of military force for economic profit. Other popular franchises include Metal Gear (whose depictions of the War Economy sometimes resemble the New York Times business section) and the corporate-sponsored bioweapons development of Resident Evil. Most obviously, high-profile first person shooter franchises such as Call of Duty, Battleground, and Counter Strike depict worlds in which the most effective solution to any given problem is to send in a unit of grizzled soldiers with nothing left to lose, so that they can shoot it in the face. This is a less-than-subtle metaphor for increased defense spending. Invasion by sovereign nation? Shoot it in the face! Terrorism? Shoot it in the face! High inflation? Shoot it in the face! Crumbling infrastructure? Shoot it in the face! Even real-world militaries have taken notice of the substantive trend, with the US Army publishing their first person shooter franchise America’s Army, an unabashed vehicle for recruitment in the style of Call of Duty. How long, then, until we get Mushroom Kingdom recruitment material like Tom Clancy’s Rainbow Star Six or Bob-omb Battlefield 4?

The most important question, one of motivation, seems unanswerable: Is Princess Peach a tyrannical despot who willfully manipulates her great loves and great enemies into a perpetual warfare over her heart in order to reap the riches of her kingdom? Or is she a selfless savior, suffering the whims and sins of the most abominable of her subjects, Christ-like, and forgiving each one in turn as a necessary evil to deliver her flock from the maw of fiscal chaos that would otherwise overwhelm and destroy them? Is she the architect of the mushroom-industrial complex, or another one of the victims?