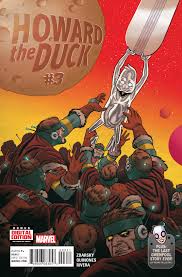 Howard is convinced that the universe is trying to kill him. And it kind of is. Or rather, it’s pretending to try to kill him. In a meta sense, conflict and tension create drama, and that’s why we’re reading this comic – the drama and the comedy, both of which are heightened through suffering. This almost looks like Howard is beginning to gain a degree of medium awareness, although I’m not sure whether that’s actually where writer Chip Zdarsky is going with this or not; in last issue’s back-up story, Gwenpool (the alternate-universe rule 63 version of Deadpool who, like her Y-chromosomed Earth-616 counterpart, has had a complete Fourth Wall-ectomy), straight-up informed Howard that they’re all just characters in a comic book and none of this matters. He, of course, just thought she was crazy. But his bad luck is turning positively cosmological lately and he’s the kind of deep-thinking duck who will only believe in coincidences for so long before having to admit there’s a pattern.

Most recently, Howard sought out the Nexus of All Realities, a portal that allows travel between universes. But instead of transporting him back to his home dimension, apparently the Nexus merged with Howard, turning him into a Living Nexus that others can now use to travel across space and dimensions, or even create new universes – the trick is that it seems like he can’t use this ability to transport himself, only others.

Zdarsky knows that the best way to deal with these tensions is to bake them right into the plot, so that’s what he’s doing. And watching Howard’s increasing acceptance (miserable acceptance, but still) of the absurdity of the situations he gets into as a result of these external requirements both makes you laugh and breaks your heart, which is also something that great writers do.

Where to Start: Howard the Duck #1 Time Commitment: 2 issues
Recommended if you like this: FF Volume 1 – Fantastic Faux 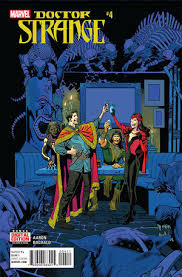 The pacing problems of the last two issues are somewhat mitigated here by a really cool flashback to Stephen Strange’s early instruction in magic at the feet of The Ancient One, Tibetan mage and himself one-time Sorceror Supreme. The lesson that he learns – and that we learn – is that magic isn’t just shooting cool energy beams out of the palms of your hands without consequence. Magic has its own form of Newton’s Third Law of Motion, that when one body exerts a force on a second body, the second body simultaneously exerts a force equal in magnitude and opposite in direction on the first body. The Ancient One teaches this lesson in a Tyler Durden-style scene where he forces Strange to punch him in the face and learn that “the harder you punch, the more it hurts you.” Meaning that casting a spell also has an effect, it can ruin your insides both physical and metaphysical. The secret is mitigating that damage and trying not to let people see how messed up you are while doing it. So Strange is in nearly-constant pain, as it turns out, and can’t stomach anything but some incredibly disgusting (even to him – he says it “tastes like leprosy”) extradimensional sannakji.

Because this is issue 4, it’s at just the right point in the eventual trade paperback for Strange to make a disovery of what we’ve known since issue 1: that the enemy isn’t magical but mechanical (which he says should be impossible), and that they’ve already reached his world after seemingly destroyed the Sorcerors Supreme from all the other realities that he can access.

Again, everything about this book is great except for the pacing , probably because Jason Aaron is writing for the trade, which I suspect is a corporate decision rather than fully his own. And it’s quite possible that when read in that format the pace feels smoother and makes more sense. I really want to get into all the philosophical implications of these impending Anti-Magical Fundamentalists from another world and how Doctor Strange fights them, but I can’t yet, and that’s frustrating, because it’s teasing to be so cool. 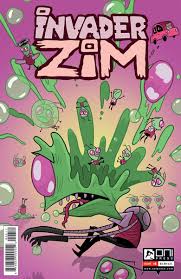 This is the first issue of Zim written and illustrated by K.C. Green, who’s best known as the guy behind the long-running webcomic Gunshow, and also as the creator of Dick Butt (WARNING: risky click back there). Did you even realize that Dick Butt had a creator? I thought that he’d just always kind of existed, primordial, pervading the peripheries of human consciousness and lurking in those dark, unseen corners of the world right along with all those other totally real beings that we’ve been shamed and cowed into believing were too perfectly diabolical to exist anywhere but in works of fiction, like Santa Claus and Cthulhu and Slender Man and Roger Waters.

But evidently, no, it was this guy. So anyway, as far as I’m aware this is the first time that Invader Zim had been done by someone who wasn’t either, 1) Jhonen Vasquez, or 2) somebody else who was forced at knifepoint by Jhonen Vasquez to impersonate Jhonen Vasquez. And yet this might be one of the most Zim things ever. The art is cartoonier than Vasquez’s style, wilder in a way, and the writing is – well, it is just insane. It’s really really funny.

The issue starts out with Zim and GIR wearing a completely unconvincing businessman robot suit and going to the bank to take out a loan so he can buy weapons-grade plutonium to power his ultimate doomsday machine. I mean open a coffee shop.

It hits on one of the main themes that runs throughout the whole Zim cartoon and comic series, which is that although Zim seems way too stupid to ever take over Earth, the humans are even stupider. Normally I don’t care about revealing spoilers in these reviews because it’s hard to talk about something if you can’t actually say anything about it, but in this case I really don’t want to ruin any of the ridiculous visual gags that made me laugh like a weasel in a green trench coat (especially page 10, panel 5).

It also goes for another of Zim’s big motifs, which is meat. Always for some reason meat.

It feels as if Green kind of ran out of material with four pages still to go or his deadline was coming up or something, but it’s fine. The point is that this comic is nuts and I should never have worried that it would be bad without Jhonen at the wheel. The, uh, pencil wheel. That’s a thing. Google it.

here to start: Invader Zim #1 Time commitment: 5 issues
Recommended if you like this: Graveyard Quest 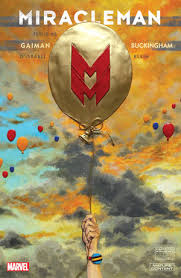 The final issue of The Golden Age arc, this story takes place around the Five Days of Mourning officially prescribed to commemorate the final battle between Miracleman and Johnny Bates nine years earlier, and the thousands of citizens of London who were killed in its wake; and the subsequent Carnival, celebrating Miracleman’s victory and reshaping of the world into the Paradise-In-Progress that it is now (“now” being 1994, of course).

The most interesting part of the issue, though, are the final four pages, the culmination of the “Retrieval” backup story that’s been running at two-pages-per-issue throughout this volume. It’s been very sort of abstract-looking and hard to understand, but everything comes into focus here, when we realize what’s been happening: Miracleman has sent a robot probe into Underspace (the pseudodimension where the Qys keep all the various bodies they inhabit, and the source of the Miracle Family’s powers of transformation from human to superhuman) to recover psychogenetic information from the remains of Dicky Dauntless, the deceased Young Miracleman. We know that Miracleman has been hard at work bringing people back from the dead – sometimes more than once, and sometimes more than one at a time – and now we see part of that process, and some more of his overarching plan to restore what has been lost. All in the name of building his utopia, of remaking Earth the way it should have been.

Miracleman’s command to “Wake him up” is the last thing we hear as we make the transition from the Golden Age into the next volume, the Silver Age, which we know is bound to get more complicated and a lot less shiny, despite Micky Moran’s pure motives.

The Silver Age is also where the Miracleman series ended, only two issues into the planned six-issue arc – and where Neil Gaiman and Mark Buckingham are going to pick it back up and twenty-two years later, finishing that volume and leading it into the final arc of the series, The Dark Age. The thematic through-lines of this volume all come together here; the mourning bounded by celebration, the road to hell being paved, brick by brick, by the most genuine of good intentions. Let’s watch it happen together.