In Part 1, we talked about the galactic system of credits and how we can interpret the Empire’s actions through an economic lens. In Part 2, we look at the Death Star as an instrument of governance.

Belinkie:  I’ve been thinking about an exchange Tarkin and Leia have in A New Hope. He’s crowing about the newly operational Death Star.

Tarkin: No star system will dare oppose the Emperor now.

Leia: The more you tighten your grip, Tarkin, the more star systems will slip through your fingers.

So let’s imagine that the rebels hadn’t gotten lucky and the Death Star had survived longer than a day. Tarkin issues a press release to the regional governors with beautiful footage of Alderaan exploding. He makes it clear that anyone who provides material aid to rebels will have their entire planet vaporized. What’s the reaction? 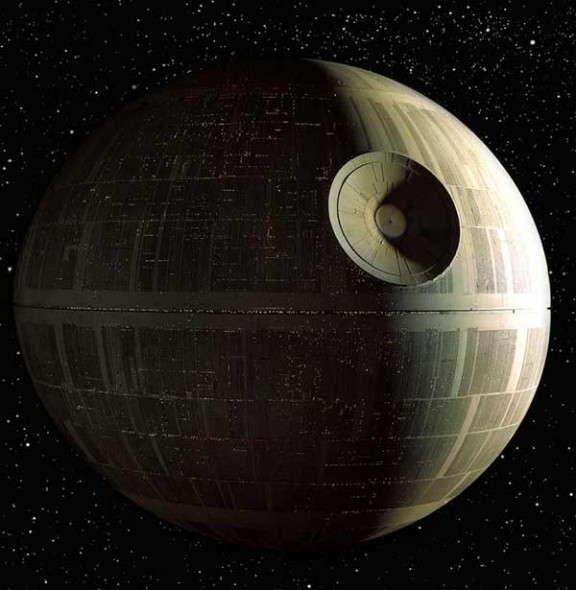 Fenzel:  Would the Death Star work? No, I don’t think so. Even in Napoleon’s time the intersection of military teaching and early social science had figured out there were limits on the number of people any one person could be expected to effectively supervise. What is the Emperor’s Dunbar Number? He does have evil mind control powers, but he seems to use them on fewer people than the Jedi could. (Maybe the Dunbar number of a Sith is always one, which would explain why there’s only ever two of them.)

At any rate, the Death Star helps with conflicts between the systems and the Emperor, but it doesn’t help in conflicts between the systems and each other. I think if the Emperor sends out that press release, he’d run into governors currying favor and casting aspersions on their rivals, knowing that if they can get their competition to look bad in front of the Emperor, Darth Vader will come choke them or their planets will blow up.

There are no doubt industries operating on planets that end up helping the rebels just through the normal course of the day, like how ISIS drives used Toyotas. As Imperial Honda or Nissan, how hard do you try to get Toyota nuked from orbit? It’s not like the Emperor has anybody working for him who will come independently verify the facts without fear for his own life for any arbitrary misstep.

Belinkie:  So in a Death Star galaxy, everyone is trying to make it look like their rivals are helping the rebels, to incur this massively disproportionate response from the Empire. Instead of less reports of rebel activity, you might get MORE reports of rebel activity, because everyone is trying to manipulate the Death Star to their own advantage. 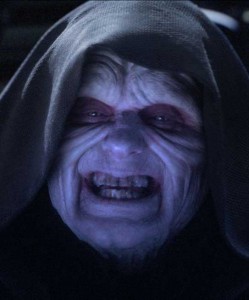 Fenzel:  Right! Right! Especially with millions of worlds or what have you all with their ancestral political power structures all overturned at once. The rebellion is not a popular uprising, it’s a Fronde. The Emperor needs better social control mechanisms to not be constantly dealing with rivalries and manipulations among his elites. Does he think he’s the only tricky, evil person in the galaxy?

You gotta pay people, man, not just threaten them! Maybe the reason the stormtroopers are so terrible and so vulnerable to persuasion is they know as soon as they leave service they will be unemployed and not even get their college paid for. One nice thing about credits is they don’t care what side of the Force you’re on. They still work.

Belinkie:  The Emperor forgot how he got where he is. When he wanted to become Chancellor, did he try and scare people into voting for him? Hell no. He bribed the Trade Federation. When he wanted to convert Anakin, did he threaten to kill Padme? Hell no! He offered to SAVE her. He rose to power because he offered people what they wanted, not because he threatened to blow them up if they opposed him.

Fenzel:  That’s much more Darth Vader’s style, flying off the handle and taking everything personally. It’s quite possible the Emperor’s faith in Vader is deeply misplaced. Vader is at the very least a wartime consiglieri, and not very well suited to winning the peace.

Belinkie:  I wonder if there’s another Moff that’s basically the PR Moff. 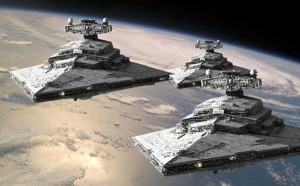 Fenzel:  There really should be.

The Emperor refuses to accept the status quo, and assumes the Republic is the way it is because it is weak and ineffective, not because the status quo has a ton of reasons it is reinforcing itself that can’t be ignored. Every move the Emperor makes weakens his Empire until he drives it into the ground. He is eventually killed because he has alienated literally every person who works for him and apparently defunded the agency that inspects reactor facilities for workplace safety.

Stokes:  You know, considering the size of the empire, the military forces involved in the Star Wars conflicts are downright miniscule. The rebellion is planning to overthrow a galaxy spanning empire — and yet they’re ALL able to hang out on Hoth? (In one facility on Hoth, even?)

And how many star destroyers does the empire have guarding the death star at any one time — it’s just a handful, right? It seems like the storytelling logic is that the Empire and the Rebellion each have about as many capital ships as the US Navy has aircraft carriers. But what sort of sense does that make?

On the other hand:  let’s suppose that spaceships are radically less common then most accounts of the Star Wars universe would assume What if the Empire isn’t trying to run things planetside hardly at all — what if their tiny little spacefleet just cruises through every so often and demands tribute in exchange for not bombing people from orbit? ​ 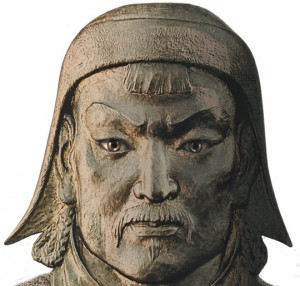 So they call themselves the Empire, but they’re not really imperial. They’re a glorified extortion racket.

Belinkie:  Like the Mongols. They theoretically conquered a lot of territory, but they didn’t really attempt to manage it. They just took their tribute and moved on.

Fenzel:  Maybe the Empire doesn’t even issue the credits. Maybe those come from somewhere else, like medieval fiefdoms using the Solidus.

Stokes:  Or credits aren’t actually the universal credit — they’re the currency used by this tiny, parasitical spacegoing elite. The actual tributes they extract are mostly in kind, but they use credits among themselves, and of course some of the locals are going to find it profitable to take credits just like people take dollars around army bases overseas.

Fenzel:  Like the devalued coins the Roman Emperors would mint when they went to Egypt to buy grain, and which eventually ruined the economy there. Or like buying anything in the Bahamas.

Stokes:  Yeah! And we just don’t see the other side of it because we spend the entire cycle of movies inside the metaphorical Sandals Resort that is the Empire/Rebellion. And thus understood, the Death Star is much more understandable! It’s still a bad idea — but if “give us stuff or we’ll bomb you from orbit” is the full text of the imperial constitution, then scaling that up to “no, but we’ll reeeaaally freaking bomb you from orbit” seems like the kind of bad idea that you’d naturally come up with. 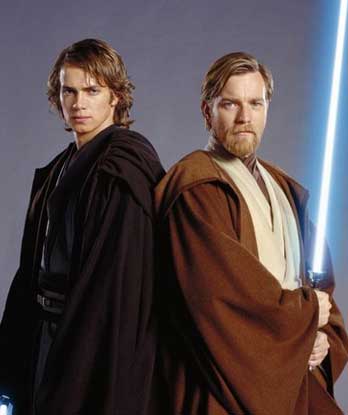 Fenzel:  Were the Jedi then a similar organization in their day? And the Republic? Or has the Empire just really downgraded its involvement in planets?

Stokes:  The way I’m imagining it, the Republic pretty much did the same thing but was more polite about it (It’s also similar to the way that a lot of medieval monarchs spent their time bouncing around from place to place, living off the hospitality of one vassal or another. Lots of people would say, very sincerely, I’m sure, that they were paying tribute out of fealty and devotion. But if you didn’t pay, you got the boot.) And if we assume that this has been the established order of things for long enough that nobody questions it, then the Jedi can be the same old monastic enforcers that we know and love.

Belinkie:  Now I’m wondering if to 99% of the galaxy, it makes any difference who is calling the shots in Coruscant. “The common people pray for rain, healthy children and a podrace that never ends. It is no matter to them if the Sith lords play their game of thrones, so long as they are left in peace.” 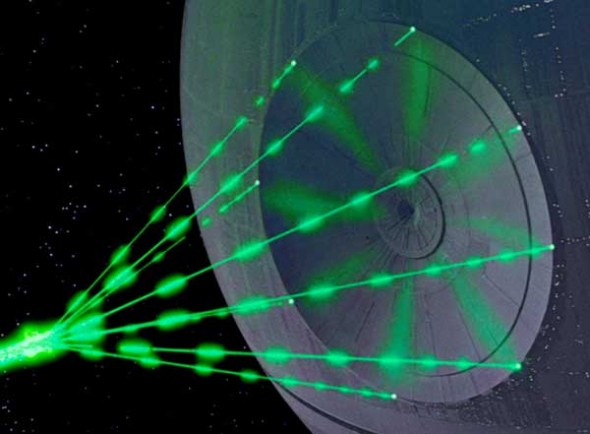 Adams: I think there are two problems with asking whether or not the Death Star works. First, we don’t really know enough about what the Empire (or Emperor) actually wants from their  domination of the Galaxy. As you say, if all they want is tribute, then a small (but unstoppable) fleet is good enough. If they want day to day management, it’s a little harder.

Second, we don’t really have a historical analogy that works.  Sure, the Death Star is essentially a stand-in for nuclear weapons, and nukes haven’t given the US or Russia the ability to dictate policy. But the Empire is different than present day (or circa 1970s) nuclear powers in at least two ways:  they’re the only ones with a Death Star, and they’re willing to use it on their own people.

We know that the one and only time a nation had both nuclear weapons and the will to use them (i.e. the US in 1945), that nation got what it wanted (unconditional surrender), but that’s not a great analogy:  it came at the end of a long and protracted conventional war that was all-but won in any case.  So we just don’t know what would happen if a unilateral nuclear power started a “screw with us and we nuke you” policy. 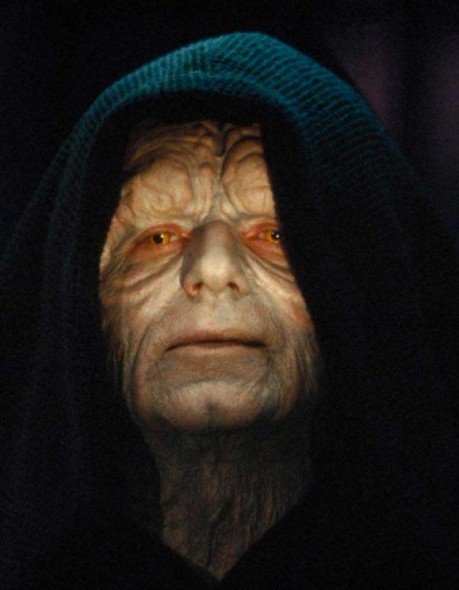 Stokes:  You know, that question about what the heck the Emperor wants is a good one. I was reading around on Wookiepedia earlier, and it seems like the long-term goal of the Sith (in Palpatine’s era) is simply to get revenge on the Jedi. So it’s possible that, rather than wanting to be emperor, and needing to eliminate the Jedi in order to make that happen, that he wanted to eliminate the Jedi and felt like the quickest way to do that was to seize imperial power. By the time he’s ordering the construction of the Death Star, ​most​ of the Jedi are dead — but not all! (Due to the wealth of expanded universe properties out there, and the basic need to have at least one Jedi in any Star Wars story, it sometimes seems like every other asteroid conceals yet another Jedi holdout.) Now, consider what happens when they blow up Albderaan Obi-Wan — and presumably every other surviving Jedi! — feels “a great disturbance in the force.” Which would probably make it harder to justify hiding yourself away on some backwater rock. Right?

Is it possible that the Death Star is a sophisticated duck call?

Adams:  I love the idea that the Emperor’s goal is just to wipe out the Jedi.  It conjures up the idea of the Emperor as a dog that caught a car and doesn’t know what to do with it. So all he does is sit around and figure out ways to get another car to come out so he has something  new to play with (thus, killing a billion people to “call” to the Jedi).

Stokes:  It would also mean that the Emperor is actively deceiving the people he works with most closely. Grand Moff Tarkin dies for a lie:  he ​thinks​ the Death Star is about effectively suppressing the rebellion, but the Emperor is playing him. Adds a touch of pathos, no?

Belinkie: It would be like if Barack Obama got elected President just to raise taxes on this one guy who was a jerk to him in high school. Take THAT, Carl!

8 Comments on “The Economic Theory of Star Wars, Part 2”