Have you seen The Man in the High Castle yet? No? Go do that now. The first episode is free (no Amazon Prime subscription needed) and you really only need to watch a few minutes to appreciate the chilling alternate reality 1960’s in which the victorious Axis powers occupy a defeated United States. You can just watch this trailer for now, but seriously, go back and watch the rest of the series.

Freaky, right? America in this universe is a terrible place, subjugated by fascist assholes. So naturally, this made me think of Community episode, “Remedial Chaos Theory.”

Seriously, though, although these two examples of alternate timeline fiction differ wildly in terms of tone and, um, levels of Nazism, they both offer insights on fate and free will that intersect and diverge in interesting and unexpected ways.

In case you haven’t seen this episode of Community, here’s a brief synopsis: seven alternate timelines branch off from the roll of a die, and the outcomes range from “the brightest timeline” (friends enjoy a fun party) to “the darkest timeline” (everyone who survives the experience is physically and/or psychologically maimed). The episode ends with the optimistic assertion that the brightest timeline carried the day. Friendship wins out over selfishness. Everyone enjoys pizza and sings “Roxanne” together. Nobody dies.

If the episode ends in the brightest timeline, then surely we, the audience, inhabit that timeline too, right? It’s part and parcel with the show’s inherent optimism, and since it’s such a great little piece of television and so effective at making you feel good, you’re highly inclined to agree.

But is this really the brightest timeline? Within this episode, we got the brightest timeline among those that were depicted. But look how things turned out after that point. A disastrous fourth season was hand-waved out of continuity as a “gas leak year.” Star Chevy Chase left the show under less than amicable circumstances, and his character was killed off. Almost all of the characters languish in a third-rate community college, denied self-actualization by a merciless story circle that traps them in their circumstances for our comedic pleasure. The show ended its run on Yahoo!. Fans even went so far as to refer to the troubled moments in the show’s production history as “the darkest timeline.”

Maybe this isn’t the brightest timeline, but it isn’t the darkest, either. We, the audience, got at least a few seasons of quality TV out of the experience. The characters, for all of their neuroses and their inability to graduate from college, found genuine support and friendship in each other, even if it couldn’t last forever or prevent all instances of hardship. They–the characters, the creative forces behind the show–did the best they could given the circumstances.

At least as far as we know. This is, after all, the only timeline we have full access to, and the whole point of alternate timelines stories like “Remedial Chaos Theory” and The Man in the High Castle is to call into question the idea that our current circumstances are somehow inevitable or fated to be. Friendship? A fun TV comedy? Lack of Nazi world domination? It didn’t have to turn out that way. We could have gotten the darkest timeline.

But we could have gotten the brightest timeline, or at least a brighter one. Sure, the Allies won World War II, but historians have gamed out plenty of scenarios where the Holocaust could have been mitigated, or avoided entirely, to say nothing of the entire war itself. Even the High Castle nightmare scenario in which the Nazis and the Japanese rule the world under fascism might not be the darkest of all possible timeline. At least there’s a peaceful status quo in 1962 and not a nuclear World War III raging (at least by the end of Season 1). 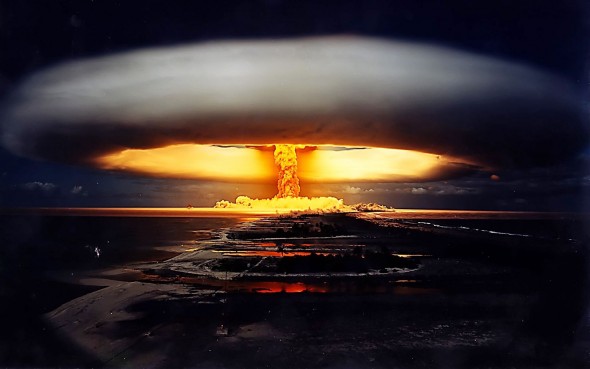 At the end of “Remedial Chaos Theory,” Abed directly addresses the anxieties at play in these alternate timeline stories:

Chaos already dominates enough of our lives. The universe is an endless, raging sea of randomness. Our job isn’t to fight it, but to weather it, together, on the raft of life, a raft held together by those few rare, beautiful things that we know to be predictable. Us. It won’t matter what happens to us as long as we stay honest and accepting of each other’s flaws and virtues.

In other words, while it’s fun and instructive to ponder the “what if” scenarios and how thing could have turned out much better or much worse than they have so far, the true value of doing so is less about judging the actions of the past or lamenting what could have been. Instead, it’s about appreciating the blessings and company we do have in this timeline, no matter how bright or dark it might be.

We see versions of this play out in High Castle. Juliana decides to trust Joe Blake, even though his loyalties are far from clear. Obergruppenführer John Smith clings tightly to his family, to the point that he appears to be willing to defy the regime in order to save his son.

But High Castle suggests that some characters won’t be content to just weather the storm; they seem ready to fight it, to look for that “way out” (which Trade Minister Tagomi may have found by concentrating really hard on his magic sticks or…what the hell happened at the end of Season 1, anyway???).

Are these two philosophies–weather the storm versus fight the storm, acceptance versus struggle–really at odds with each other, though? On the contrary; they actually complement each other quite well. Community, as a comedy, inherently looks back on itself in order to reset the situations at the end of each episode to enable further comedy. High Castle, as a drama, inherently looks forward in order to propel the story and characters to new and different places. The former represents an extreme version of complacency and acceptance of circumstances. The latter represents and extreme version of raging against circumstances that are beyond control. Comedy and drama complement and balance each other, as do fate and free will.

And lest we forget, Evil Abed did find a way out of the darkest timeline, eventually. Too bad he tried to kill Jeff instead of, oh, I don’t know, HITLER. 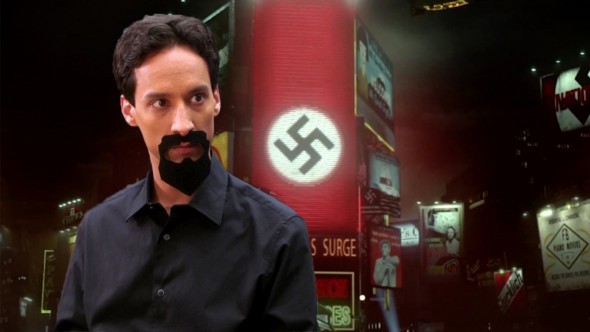