Just one comic review this week, but it’s a good one. 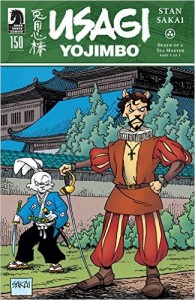 Usagi Yojimbo #150 is not the one hundred and fiftieth issue of Usagi Yojimbo. Actually it’s the 209th. As I mentioned in a previous Reading List, a couple of years ago Stan Sakai’s series about a rabbit ronin in an athropomorphic animals version of 17th Century Japan celebrated its thirtieth anniversary, surpassing Dave Sim’s Cerebus the Aardvark saga (about an anthropomorphic aardvark barbarian in a sort of Fifteenth Century-ish world populated mostly by humans) as perhaps the longest-running continuous narrative in human history. The book has gone through a number of different publishers, however, starting out at Fantagraphics, moving over to Mirage for a while, and eventually landing at Dark Horse, where it’s been for the past, well, 150 issues.

This is the kind of non-milestone milestone that most other creators would be all over. Special editions, holofoil covers, SOMEBODY IMPORTANT TOTALLY DIES IN THIS ISSUE kind of stuff (see, for instance, last week’s utterly unimpressive Uncanny X-Men #600). Stan Sakai is not that kind of creator. Everything we know about him shows him to be humble and honourable, interested more than anything else in telling a story and telling it as straightforwardly and unpretentiously as possible. That’s what he’s done for the past two hundred and eight issues, plus the occasional miniseries, and that’s what he’s done with this one as well. No variant covers. Nobody important dies in this issue. The issue number isn’t even any bigger than usual.

And yet there is something special about this issue as well. For the first time (I think – if I’m wrong, somebody please “Well, Actually” me), a Westerner swordsman comes to Usagi’s Japan. Rodriguez is a fox or something (it’s sometimes hard to tell exactly what animal these people are supposed to be), an ambassador on a mission from the king of (I assume) Portugal to learn as much about Japanese culture as possible. Unfortunately, Rodriguez is kind of a psycho. He’s an excellent swordsman, but in the European style of swordfighting using a rapier and incredibly swift, round strokes; the traditional Japanese samurai style – using a katana and focusing more on subtle movements that are often intended to take down an opponent with a single, powerful swing – has yet to formulate a counterstrategy for this foreign technique. Not only does Rodriguez cut through his samurai duelling opponents almost without breaking a sweat, the audiences are baffled into speechlessness at his fighting method. As his (doomed) first opponent in this issue observes, “It’s so fast! Like an alive thing!”

Duelling a willing opponent is one thing – this fight was set up for the benefit of Lord Odo, who promised Rodriguez any reward he wants if he won. But Rodriguez demands that, as victor in the battle, Lord Odo order the seppuku (ritual suicide) of the famous tea-master Nobu, who refused to perform the tea ceremony with Rodriguez, calling the foreigner uncouth. Lord Odo is reluctant to grant this wish – until, that is, Rodriguez threatens to report back to his king that Odo is a lord without honour. Terrified for his international reputation, Lord Odo sends his samurai to abduct Nobu – who happens to be participating in the tea ceremony with Usagi at that moment.

Now, there aren’t many surprises in this story. Maybe none, actually. It’s simple and even predictable. But no less enjoyable or touching for that. It’s kind of shocking to see a European in these pages at all, but perfectly realistic (as it were), with the shogunate not yet having expelled and banned all foreigners or outlawed Christianity – although that would be soon to come. Indeed, Rodriguez prominently wears a crucifix around his neck, just to make his alienness perfectly clear.

While Usagi himself has always been the main focus of the book, Sakai also draws the world around the character as a fascinating place, with its own history, mythology, and politics. Usagi gets caught up in lots of things, but he’s still only part of a massive and complicated planet that we mostly only glimpse by following his life and adventures. It’s an iconic world, a world we’re pulled into, and it’s a major accomplishment that Sakai has pulled off, in any medium.

If you’re not reading Usagi Yojimbo by now, you’ve got a lot of catching up to do, but it’ll be worth it.

Where to Start: Almost anywhere, really. You can pretty much just pick up the book and start reading at practically any place. Time Investment: That said, 208 issues before this one – whew!
Recommended if you like this: Usagi Yojimbo: Senso, Cerebus the Aardvark, Puma Blues