Lots of Marvel stuff this week, True Believers! Also, as a bonus for new readers, I’ve started featuring Where to Start and Time Investment for ongoing stories, and other comics that are Recommended if you like any of these.  Add one (or all) of these to your reading list, and let us know what you think in the comments. 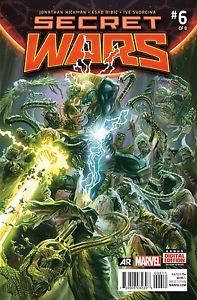 Marvel’s Secret Wars series is running really late, which means that the events of the titular conflict are still going on even as Marvel is launching its new titles in its new world order, which is a little bit weird.

Anyway, back in Battleworld, Valeria – as far as she knows, Dr. Doom’s daughter – continues to investigate the origins and current whereabouts of the members of the two lifeboats that arrived from the previously destroyed Marvel universes, and begins to suspect that the story Doom has been telling for all her life isn’t all that he claimed it was. Meanwhile, versions of Reed Richards from two different universes debate how to deal with Doom himself. Peter Parker and Miles Morales, the Spider-Men of Earth 616 and Earth 1610, respectively, discover the source of Doom’s power in Battleworld (with the help of a three-week-old hamburger) – namely: Owen Reece, the Molecule Man. Finally, Black Panther and Namor, the rulers of two erased kingdoms, find the weapons that Stephen Strange hid to battle Doom before his (Strange’s) untimely demise, in the form of the matter-transporting Siege Courageous, and the most powerful object in the universe itself, the Infinity Gauntlet.

Is the tide beginning to turn in our heroes’ favour? Well, of course it is, there are only two issues of this miniseries left. Yet it feels like Secret Wars is really dragging on longer than it needs to, and not just because it’s been so late. While the art is consistently good and there’s some cool stuff and some funny stuff in every issue so far, I’m disappointed not just with the fact that Marvel felt they needed to do this in the first place – give their universe a transdimensional facelift, that is – but also with their ongoing compulsion for a great big crossover event every single summer that changes everything.

Don’t get me wrong, Marvel is still publishing some excellent stuff. But almost all of it are the books that take place in their own little corners of the Marvel Universe, that share a world but don’t require that you be reading ten other books or have an encyclopedic knowledge of their history to enjoy. The Marvel Universe may very well be better off after Secret Wars, but getting there is starting to feel like a lot of work.

Where to Start: Secret Wars 2015 #1 Time Investment: 6 issues so far.
Recommended if you like this: The original Secret Wars series, published 20 years ago. 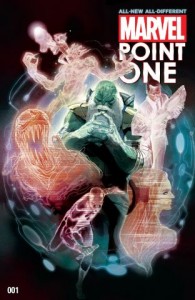 The all-new, all-different Marvel Universe begins here! Which is a little weird because, like I mentioned, the event that created it isn’t even finished yet. That said, the first thing we know about the reconstructed universe is that Battleworld still exists here – albeit peripherally – and The Maestro (also known as a future version of The Hulk) is playing a game of chess with his opponent The Collector, except the pieces are citizens of the Marvel Multiverse and the stakes seem to be ambiguously high.

Really this is just an anthology to launch some of Marvel’s new books coming out of Secret Wars. In this issue we’re introduced to the new Contest of Champions, the new Carnage, the new Rocket Raccoon and Groot, the new Agents of S.H.I.E.L.D., the new Inhumans, and the new Daredevil. And to be honest, although a couple of these look cool (in particular Rocket/Groot and S.H.I.E.L.D.), the only book that I’m really excited about is Daredevil. Not just because I was already excited about Daredevil, but because Charles Soule and Ron Garney’s short story of a young Chinese illegal immigrant who believes his ticket out of poverty and into superheroics is the Invisibility Suit he built is an intriguing peek to a Daredevil scenario that looks equal parts classic and fresh. You’ll be hearing about it.

Where to Start: Right here!
Recommended if you like this: Inhuman Volume 1: Genesis 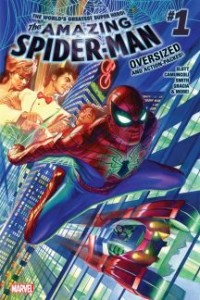 First thing we discover about Spider-Man in this new world is that he’s pretty much the same as the way we left him. He’s still not back with Mary Jane; he’s still the head of Parker Industries, the global technology company started by Otto Octavius when he (Octavius) was trapped in Parker’s body for about a year and took over his life.

We open with a car chase in Shanghai between Spider-Man and Mockingbird in the Spider-Mobile (remember that thing?) and some guys from the Zodiac cartel who broke into Parker Industries’ Shanghai branch and made off with their secure servers. It’s exciting and fun, and yet it’s also problematic, because – as readily admitted within the comic – Peter as C.E.O.has become something of the “Poor Man’s Tony Stark,” even using the old trick of “hiring” Spider-Man as his “bodyguard” (while actually hiring Hobie Brown, a.k.a. reformed supervillain The Prowler, to dress and act as Spider-Man during events where he and Parker have to appear together.

All in all it’s an entertaining, classic-feeling Spidey story, and my only real problem is that…well, it’s not different enough. I just mean that if they destroyed and rebuilt the entire Marvel Multiverse just so they could get Miles Morales into Earth-616, it wasn’t worth it.

Speaking of which, this issue also includes five bonus stories that serve as lead-ins to some of the other new Spider-Man titles premiering soon. First is Spider-Man 2099, written by Peter David – the very man who launched the original 2099 series back in 1992. Miguel O’Hara, Spider-Man of the almost-Twenty-Second Century, is trapped in the present and losing hope. Peter Parker offers him a job. The second one is Silk, the spider woman who isn’t Spider-Woman, bit by the same radioactive spider that gave Peter his powers, then locked in a basement for fifteen years and released (by Peter) only recently. Third is the spider woman who is Spider-Woman, Jessica Drew, six months pregnant and still superheroing. Then, in the 1602 universe (which evidently still exists, which is nice), the Web Warriors (including three Spider-Mens, one Spider-Gwen, and even Spider-Ham!) are travelling around the multiverse righting wrongs in worlds without Spider-Mans. Finally, Miles Morales, the Ultimate Spider-Man, is still getting the hang of this new universe in which he finds himself…and apparently Regent also still exists.

And those aren’t even all of the new Spider-Books that are launching this fall! It’s just too many spiders, you guys. Peter Parker isn’t just the new Iron Man, he’s the new Batman Incorporated. One Spider-Man is cool. Ten Spiders-Mans spoil the broth.

The only one of these books that I’m really looking to pick up wasn’t even included in the preview, and that’s Spidey #1, expanded stories from Peter Parker’s high school years. Stay tuned for my whiny analysis of that sometime in the next month.

Where to Start: This is it!
Recommended if you like this: Amazing Spider-Man: Big Time 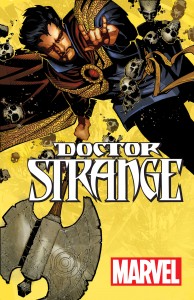 Here we go: Doctor Strange. So many people love this character, and yet he hasn’t starred in his own title for more than 15 years, although he appeared in a bunch of Avengers books over that time. With the Doctor Strange movie slated for 2016, though, Marvel needed to reintroduce him and give the name some resonance.

The Stephen Strange that we meet here is quite a bit more, let’s say, normal than the one we knew. Mostly he speaks like an ordinary person, rather than in the melodramatic tones and Lovecraftian verbiage of the past. He’s still Sorceror Supreme, though, and does his best to solve the supernatural problems visited upon the citizens of New York City.

His diction was a bit jarring, I’ve got to admit. But there are two things I really, really like about this first issue that makes me think writer Jason Aaron gets this character and knows what he’s doing with him. There’s the analogy that Strange draws between bacteria and demons – in the same way that the human body is home to countless microscopic organisms, he tells us, the human soul attracts mystic parasites of its own. Most are harmless, and some are even helpful. Others are destructive, and those are the ones that Strange seeks to banish or otherwise eliminate. In other words: he’s a doctor. Which makes perfect sense – Stephen Strange was, after all, a surgeon before he became Sorceror Supreme. Treating demonic possession like an illness, hauntings like epidemics. Looks like this series is going to cast Strange as something like the Gregory House of the Occult. And that suits me just fine.

The other thing is the tease we get for the Big Bad of this story arc: a group of what seem to be robot fundamentalists, interdimensional followers of scientism called The Empirikul, on a crusate to “purify” the multiverse of every last scrap of the spiritual. These are the perfect antagonists for Doctor Strange, and the idea actually carries a lot of cultural meaning at this point in history, too – Jason Aaron is looking to make a mark on comics with this, I can see. Off to a good start. Plus, Chris Bachalo’s art is the perfect balance between realism and surrealism for a modern-day Doctor Strange book.

Where to Start: The road to Hell begins here.
Recommended if you like this: Marvel Masterworks: Doctor Strange Volume 1

What did you think of these issues? What else is on your reading list? Let us know in the comments!