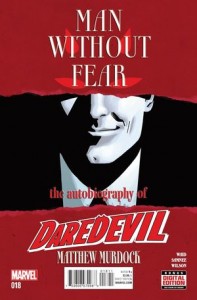 This final issue of the current volume of Daredevil (that’s Volume 4, if you’re counting) isn’t just the last issue before the title relaunches in October (along with all of Marvel’s other surviving titles – with a couple of books, like Howard the Duck and The Unbeatable Squirrel Girl getting their second Issue #1 within a single year); it also wraps up a huge number of dangling Daredevil storylines: the fate of Foggy Nelson, Matt Murdock’s now-public persona being further sullied when The Shroud, using a captured Leland Owlsley to power a surveillance supercomputer, broadcasts privileged information on Murdock’s clients to the whole world, leading Murdock to enlist the help of the Kingpin, only to have Kingpin double-cross him (of course), kidnap his friends, and dispatch the super-assassin Ikari to take him out for good.

But this is also the final issue for the creative team of Mark Waid (writer) and Chris Samnee (illustrator). Mark Waid took over the book after an unbelievably fertile and entertaining – not to mention dark – string of stories by all-star writers like Brian Michael Bendis and Ed Brubaker made DD probably the most interesting character and the best book coming out of Marvel. These could not have been easy acts to follow, but Waid made his run (the longest-ever for a creator on a Daredevil book) dig deeper into the storylines set out by his recent predecessors (and even tying up a loose end about Matt’s mother left by Frank Miller way back when), and successfully took Daredevil back from the brink of darkness of those same recent storylines (especially the pitch-black, demon-ninja infested Shadowland arc) without disrespecting the character development that led him there in the first place. It could not have been easy to figure out. But Mark Waid is one of the best writers in comics, with a deep understanding of character in general and an obvious affinity for these characters in particular. He even made Daredevil’s move to San Francisco – a twist I personally was really nervous about – believable and productive. Why are all so many Marvel titles moving from New York to San Francisco? Does anybody know?

Anyway, these last few issues have moved back into the darkness a little bit, proving that Waid wasn’t writing a “lighter” Daredevil because he couldn’t write him “dark” but because both readers and the character needed to take a breath after the relentless punishment that Bendis and Brubaker put us through. The character interactions and fights in these last few issues have been top-notch too, arresting and fun and real.

It’s a really satisfying end to the run – with Matt Murdock finally completing and publishing his autobiography, letting the secrets unescapably out – and a nice spot for Waid to leave Daredevil in, personally, if not professionally. He’s lost a lot of clients after the Shroud debacle, but he’s surrounded by friends. When Charles Soule (who wrote the Death of Wolverine miniseries, which was honestly, surprisingly, unexploitative and just generally a lot better than it should have been) takes over on the new Daredevil #1 next month, he’ll have a little more space to move than Waid did when he grabbed the reins a few years back, and I’m really looking forward to what he’s going to do. Will Daredevil remain my favourite Marvel book once the Secret Wars (of which Daredevil was thankfully not a part) are over and the new canon settles in? Transitions are always rough. But now that Daredevil has a much higher profile than he has probably ever before – both in our world and in his – I think everybody knows that there’s a lot riding on keeping his stories exciting and cool, and they’ll all be bringing their A-games. 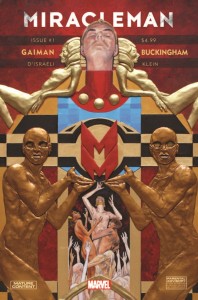 I really thought this was never going to happen. After so many years in copyright hell, including a cosmic battle between Neil Gaiman and Todd McFarlane for the rights to the character (which Gaiman won, only to learn that McFarlane never really had the rights in the first place!), Marvel has ended up reprinting the entire run of Miracleman (once known as Marvelman, before, again, a mess of lawsuits), which Alan Moore (or as he’s known in these reprints “The Original Writer,” since he’s a cranky man these days and doesn’t want his name on pretty much anything anymore) reimagined the 1960s cheeseball British superhero as a middle-aged man with real powers but a hallucinated history. The first three volumes were written by Moore, and then the book was handed to Gaiman, who wasn’t anywhere near the superstar that he is today – in fact, his Miracleman run is one of the factors that turned Neil Gaiman into, you know, Neil Gaiman.

So we’ve got through the first three volumes by The Original Writer and now we’re starting with Neil Gaiman’s run. This is exciting for a number of reasons. First, just the fact that they’re finally being republished so that we can read them in a non-pirated format. But more than that – once the reprints get past where the series fell off mid-stream back in the ‘90s, at #24, Neil Gaiman will actually be resuming the series and completing the storyline that he originally envisioned more than twenty years ago. Which is…marvellous.

We open here with Miracleman and his fellow superpowers and their alien adjuncts having transformed the world – ostensibly for the better. These godlike beings now exist – why should they use their powers just to uphold the status quo? It’s a brutal subversion of the typical superhero trope (particularly Superman), similar to what Moore did with Watchmen. At the beginning of Gaiman’s run, Miracleman has taken over Earth and remade it. As this issue’s recap says, “It is 1987. It is the Golden Age.”

Gaiman cannily starts the volume not by following Miracleman but with a number of regular humans – pilgrims, really – embarking on a journey up to the top of Miracleman’s pyramid (which Gaiman tells us in the reprinted original script at the back of the issue “takes up half of London…and goes up for ten miles) in order to “pray.” In other words, they all want favours. The fact that Miracleman deliberately makes it life-threateningly difficult for anyone even to approach him tells us a lot about who and what he thinks that he is now. When we first met Mickey Moran, he was a regular guy who didn’t understand what all these powers were or what he was supposed to do with them. How quickly does power seem to corrupt. In our world, God (to those who believe in Him) rarely gives definitive responses to our prayers, but at least we’re able to pray to Him anywhere, anytime, and effortlessly. Miracleman, though, turns out to be the sort of god – nearly omnipotent but neither omniscient nor omnipresent – that needs to make you work to get your prayers to reach his ears. To his credit, at least, he’ll give you an answer right to your face, although of course it still might be no, and he won’t explain why.

It’s absolutely classic Gaiman – in the figurative and literal sense – and Mark Buckingham’s art is perfectly suited to the kind of bizarre, sweeping, alien interior landscapes that inhabit the story and threaten to drive its mere human participants mad. It’s by turns evocative of Salvador Dali and M.C. Escher, and reminiscent of some of the issues of Sandman that focus on that series more minor characters – with shades of cosmic horror to really make us viscerally appreciate how strange and different, how inhuman, the Earth has become in this new Golden Age.

It’s great. Better, probably, than even The Original Writer’s run. Certainly more subtly complex. Cannot wait to keep reading and at last enter the next chapters – the Silver Age and the very long-awaited and of course inevitable Dark Age. Seriously cannot wait.