Reading List is Back with another set of comics that Richard Rosenbaum has been reading for the last week. Pick up any of these titles at your local comic book shop, or at the Amazon Affiliate Links below.

Assume a blanket spoiler warning for all of the series that are discussed below. 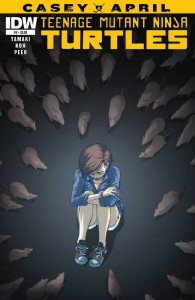 The latest of the TMNT side characters miniseries…es… is the story of Casey Jones and April O’Neil, the Turtles’ closest human allies, on a road trip across California. Officially they’re in search of answers to some mystical questions raised by the discovery of an ancient scroll stolen from the Foot Clan. That’s the excuse, but the thrust of this series is more an exploration of the relationship between April and Casey – after having been thrown together by events beyond their control, they’ve finally got some time to be alone and (they think) away from the madness that is hanging out with the Ninja Turtles. And this miniseries is therefore more suble and emotional than the high-intensity action that the rest of the IDW TMNT universe has been.

This issue in particular sees April and Casey separated after a spat, and now both separately trapped in a mystical labyrinth seemingly set up by the Rat King. So there’s a lot of wandering around and talking to themselves going on. It’s a style and pace that’s not very familiar in a Ninja Turtles comic and I’m not really sure that it works as one.

This miniseries is written by big-deal indie comic creator Mariko Tamaki (from Toronto, Canada – like me!), and snagging her for a TMNT book must have been a major coup for IDW. It definitely expands the sphere of the sorts of stories this series is willing to tell – Tamaki’s work does tend to fall into the kind of mood that C&A has: she’s interested in emotional conflicts, interpersonal relationships, and the quiet meanings of unusual circumstances. What the series evokes for me are the (separate) arcs of April and Casey in the original Mirage TMNT “City at War” storyline, which also dealt with the characters trying to figure out who they were in relation to each other and what they really wanted for themselves. In the IDW series, April and Casey are much younger than their Mirage counterparts, and so it makes sense that their conflicts and their reactions would be of a more adolescent tone. But not a lot actually happens here, at least not so far.

The art by Irene Koh (Secret Origins: Batgirl) and colours by Brittany Peer fit the book’s mood perfectly, with a little bit of manga influence, expressive faces, and brooding tones. It’s a weird, slow kind of story, and I’m definitely waiting to see where it goes.

E is for Extinction #3
Marvel Comics 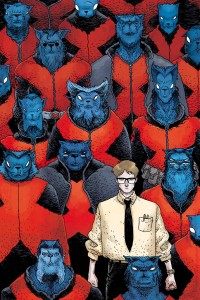 Remember last week when I said that there was only one other Secret Wars book that I was still reading besides Spider-Man: Renew Your Vows? This is it. This corner of Battleworld follows the the Grant Morrison X-Men continuity of the early 2000s…which was bad, just like everything Grant Morrison has done since leaving JLA. Which is kind of weird, because this series started out pretty interestingly, showing a world where mutants are almost like a ruling class and some of the older X-Men’s powers have started to wane for no apparent reason.

By this issue, though, we’ve devolved (heh) into a more or less senseless fight between (mostly) Grant Morrison’s dumb new mutants like the Stepford Cuckoos and Marty Stu – uh, I mean, Quentin Quire – and an army of Hank McCoys, ultimately transitioning into a “To Be Continued!” when the mind of the deceased Professor Xavier in the body of the deceased Quentin Quire declares: “X-Men, emergency! My evil twin sister, Cassandra Nova, has taken possession of the Phoenix Force.”

X-Men is about conflicts between opposing models of identity politics, and it doesn’t have room for the kind of weird winky cynicism and recycled Invisibles tropes that Chris Burnham is writing here. Even the art is, well, not bad, it’s perfectly appropriate for the story, but it’s just kind of gross to look at. It does what it’s setting out to do, but just…I’m not really interested anymore. Maybe it’s just me. But Secret Wars has only got me paying attention to Renew Your Vows from here on out. 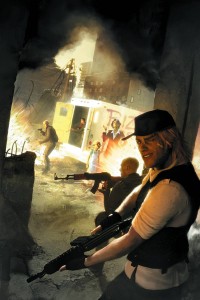 Okay, I’m just going to go ahead and admit that I have very little idea of what’s going on in this series anymore. The official sequel to Fight Club, written by Chuck Palahniuk himself, takes place a decade after the end of Fight Club, with the protagonist (here called Sebastian) and Marla Singer married and parents to a young son. Marla, knowing now about the whole Tyler Durden situation, has been tampering with Sebastians meds so that Tyler would return and make their life together a bit less boring. But it backfires, of course, and now Tyler is the leader of a straight-up international terrorist organization that’s evidently trying to overthrow society.

Look, Fight Club is one of my favourite books and movies, Palahniuk is one of my favourite authors, but I just don’t understand what he is trying to do here. Maybe I’m dumb or something. He’s said that he decided to write this sequel as a comic book in order to take advantage of this medium’s unique ability to jump from scene to scene without any sort of warning or transition – and he definitely does that a lot here. But like, I’m just not getting it. I’m perfectly willing to accept that it’s a failure in my reading rather than in Palahniuk’s writing. This series isn’t what I expected it to be, and that’s fine – but after we got such a tantalizing insight into the origins and reality of Tyler Durden in his recent Fight Club prequel short story Excursion, I kind of thought that Fight Club 2 would be…I don’t know. Something else. I’m along for the duration, and maybe things will coalesce a little better as the series progresses. But for now I’m giving it a B for Baffling.

This is old stuff, but: 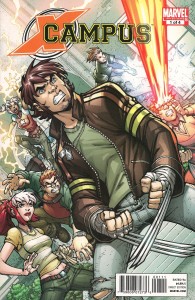 A reimagining of the X-Men as students at an exclusive high school – though not one solely for mutants – by Francesco Artibani, who is apparently an Italian cartoonist who’s worked mainly on Disney titles. This book is just a mess. The art throughout is nice, but the story is simultaneously boring and confusing, and the dialogue is simply awful. I’ll chalk that up to Artibani’s first language not being English, but that doesn’t make it any less painful to read. 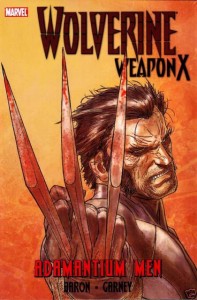 This, on the other hand, was great. When a private security corporation called Blackguard gets their hands on the Weapon X Project files, they quickly get to creating their own Wolverine-style super soldiers, and the real Wolverine sets his mind and claws to taking them down.

Writer Jason Aaron really understands who Wolverine is and gives us not only cool fight scenes (illustrated by Ron Garney), but small character moments that solidify all our reasons for caring about Logan as a person and make us empathize with his strange blend of moral determination and guilt about being who he is and doing what he does. Highly recommended.