[This week, we’re pleased to bring you a two-part series by Sean Nixon that uses game theory to understand Game of Thrones. Part 1 appeared on Monday. Here’s Part 2. – Ed.]

In Monday’s post, I used the concept of the meta-game to explain how the main strategic challenges facing characters in Game of Thrones involve identifying the unspoken rules of the particular strategic interaction they are in at a given moment. I used the example of Ned Stark’s ill-fated bidding war with Cersei Lannister to illustrate the deadly consequences of misreading the meta-game.

Is everyone in Game of Thrones doomed to repeat Ned Stark’s mistakes? To illustrate how the meta-game concept can help explain learning and the evolution of strategic behavior in Westeros, let’s turn to a few more examples. 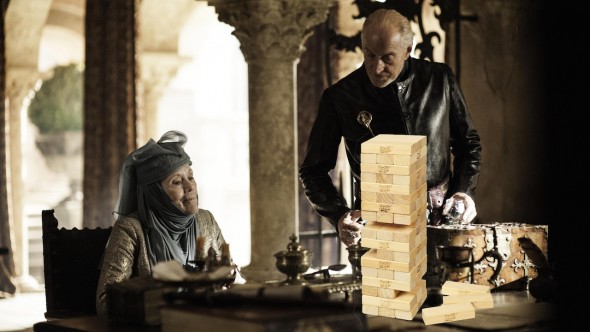 At the start of Season 3 of HBO’s Game of Thrones, the Lannisters (led by Tywin Lannister) and the Tyrells (unofficially led by Olenna Tyrell) have emerged as the last two Westerosi super powers. Interestingly enough, both have strong track records as favoring diplomacy. TywBin won the war against the Starks through making alliances with the Boltons and the Freys while the Tyrells were allied with Renly Baratheon before his premature end. But, cooperation can be just as much a competitive game as conflict.

The simplest of bargaining games goes something like this. Two players receive a dollar to divvy up amongst themselves. The first player decides how to split the money up, say 70-30, and then the second player either agrees to the split or decline and no one gets any money. This is aptly named the Ultimatum Game. While the second player likely sees being offered 30 cents as an unfair bargain, they may still want to take the offer since the alternative is nothing. In Season 3, Tywin and Olenna play just this sort of game over the fate of Loras Tyrell. Olenna can agree to the arranged marriage between Loras and Cersei offered by Tywin, or Tywin will conscript Loras to the kings guard and Loras will be unable to marry anyone. Seeing the futility of refusing the offer out of spite, Olenna ultimately agrees to the match. Like chess, this game features sequential play, but instead of having zero sum outcomes with a winner and a loser, in the ultimatum game either both players win (though Tywin comes out farther ahead than Olenna) or no one wins.

Tywin and Olenna find themselves in a rematch for Season 4, complete with raised stakes, fancy jewelry, and a body count. This time Tywin has offered the Tyrell family a position of power in the capitol in exchange for a sizable donation of supplies, gold, and armed forces to the capitol’s continued survival. A marriage between Tywin’s and Olenna’s respective grandchildren, Joffrey and Margery, acts as the lynchpin in the bargain. Both players stand to benefit in the deal and without it King’s Landing will likely fall to starvation, bankruptcy, or invasion and then neither house gets to be King or Queen. So, why does Joffrey end up dead and why does Tywin not see it coming? Once again, someone has misjudged what game they were playing.

Tywin has typically been seen setting terms; as the head of a major family in Westeros, this has probably been the case his whole life. All through the war of the five Kings, Tywin sent off letters offering people like Walder Frey and Roose Bolton deals they can’t refuse. Here’s the offer, take it or leave it. Of the very few people even in a position to negotiate with Tywin, most have lacked the strategic thinking to bother with it. In Lady Olenna, he finally finds himself pitted against a worthy opponent and completely fails to adapt.

Olenna understands, however, that she can make a counteroffer and leave Tywin in the position of accepting a less favorable deal or letting the capitol go to hell in a hand basket. By killing off Joffrey, the Tyrells stand to gain a great deal, not only by saving Margery from an abusive husband, but also by installing a much more pliable king. Under normal circumstances, murdering the groom would be a dealbreaker, but Tywin has the option of throwing his son Tyrion under the bus to assuage the lust for justice that society demands after a regicide.

The Importance of Failure

Understanding the structure of the game of thrones now grants us a clearer understanding of its meaning to the Kingdom of Westeros. The world of chess is populated by strategists thinking seven moves deep and anticipating everything until, finally, the superior intellect springs his trap, which has been hiding in the unfathomable multitudes of possibilities all along. The A Song of Ice and Fire series depicts a world of characters constantly scrambling to adapt to an illusive and fickle rule set. The variable nature of the sub-games promotes flexibility as a virtue over sheer strength (of intelligence, or wealth, or charisma).

In this context, the enemy of flexibility is success. The examples discussed above illustrate this point. Continued success in the years preceding the series has hardened the beliefs of both Ned and Tywin and left them unable to identify rules which deviate from their world view. In Ned’s case this leads to catastrophic failure. A generation later, fan favorite Tyrion Lannister (youngest son of Tywin Lannister) and John Snow (bastard son of Ned Stark) show what similar beliefs can accomplish when tempered by a healthy dose of minor failures. John holds Ned’s same code of honor, but manages to shed enough of it to act as a double agent north of the wall. Tyrion inherited much of his father’s pragmatism, but showed enough commitment to duty to earn himself Varys’ help when it mattered most.

Now, while being flexible grants characters like Tyrion and Jon Snow some advantage, ultimately no one character can come out ahead in every conceivable sub-game . There’s no way to rank the players by ability in the game of thrones, since the abilities required can vary so greatly from sub-game to sub-game. Robb Stark succeeds at battle, but fails at diplomacy. Stannis Baratheon fails at battle, but succeeds at finding foreign investors.  In season 5, Jon finds himself in a situation where even with a firm grasp of rules he can’t guarantee a winning strategy. Instead he has to settle for employing a strategy that minimizes the number of deaths assuming a worst case scenario.

When thinking about a book/TV series, the ideas in game theory aren’t much good as a predictive science. Instead, these ideas work as a post-mortem analysis for the values and beliefs of the characters and the society they live in. Even heavily simplified models illustrate the disconnect between some character’s expectations and their ultimate outcomes. Every time a plan comes together for Littlefinger it just looks like clever strategy. However, when Ned or Tywin or Rob or Stannis fail, that dissonance between expectation and result really shines a light on the beliefs that have created a blind spot in their view of the rules at play.

For the sake of symmetry, let’s end where we began, with chess in The Wire. If D’Anglo is correct, and the drug dealing hierarchy is like a game of chess, then who or what is enforcing the rules? Just as in Westeros, Baltimore is filled with sub-games and meta-games. In Westeros, the rule enforcing power of institutions (important families, religion, bands of horse riders) is rather weak and this results in uncertainty as to what rules to follow. The early seasons of The Wire on the other hand, depict a Baltimore where the institutional power of the Barksdale drug gang is nearly absolute and the determinism of chess seems a more apt analogy. However, as the series goes on, the Barksdale hegemony is challenged by the rising power of Marlo Stanfield’s crew, turning the streets of Baltimore into a more Westerosean tangle of meta-games and sub-games.  In both Westerns and West Baltimore, it’s not just enough to understand what the rules are, but also where they came from. Failure to look outside of the immediate context to ask which game you’re actually playing can lead to deadly consequences in either setting. Or, as Marlo himself put it: 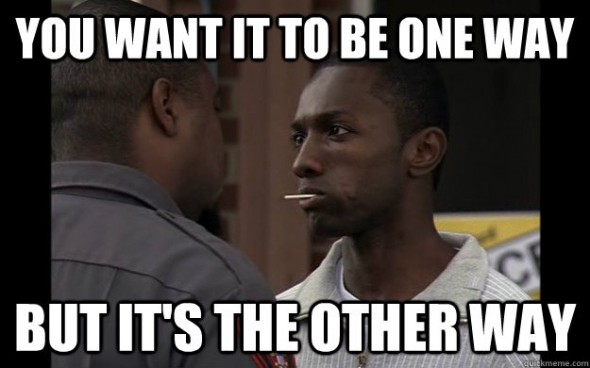 Sean Nixon is a mathematician at the University of Vermont specializing in nonlinear waves and optics. Special thanks to Colin Nixon for helping to translate this article from twenty-three pages of Makhov-chains and differential equations into English.

6 Comments on “Beyond Winners and Losers: Failure and Learning in the Meta-Game of Thrones”