[This week, we’re pleased to bring you a two-part series by Sean Nixon that uses game theory to understand Game of Thrones. Here’s Part 1. Come back on Wednesday for Part 2. –Ed.]

A title like Game of Thrones presupposes that somewhere buried in all the battles, beheadings, alliances, betrayals, social climbing, and dragons there’s a game being played. The structure of that game, however, is far from simple. Being a bit of an armchair game theorist myself, it seemed like a game theoretic take on G.R.R. Martin’s fantasy epic would be low hanging fruit. Nevertheless, when I started writing this article all I could find on the matter was a short (but clever) piece on what has since become a defunct blog. Part of the trouble is that games come in many shapes and sizes and the game of throne uses all of them. Given the diversity of strategic dilemmas faced by the inhabitants of Westeros, where is the best place for a game theorist to start?

When it comes to games in pop culture, chess is the ubiquitous elephant in the room. That chess is the game of choice to illustrate larger points is obvious with a quick look at some of the Overthinking it favorites. For instance, The Wire uses chess as a metaphor for the hierarchical structure of West Baltimore’s drug trade. 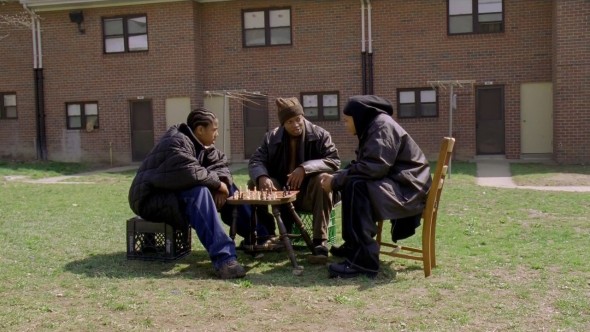 Independence Day uses chess as a metaphor for the aliens’ coordinated laser assault. 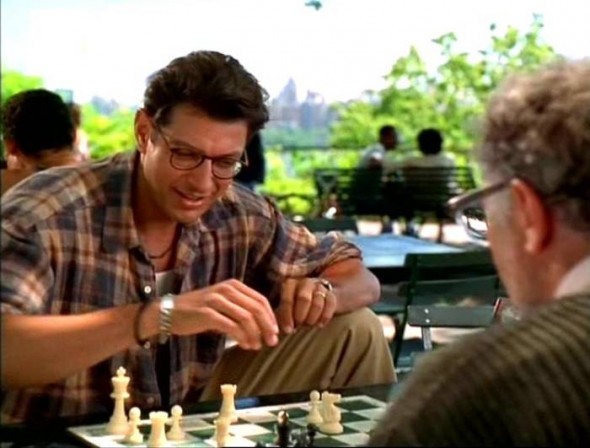 In The West Wing, chess is simultaneously used as a metaphor for political tensions between the United States and China and for President Bartlett’s internal struggle overcoming an emotionally abusive father. 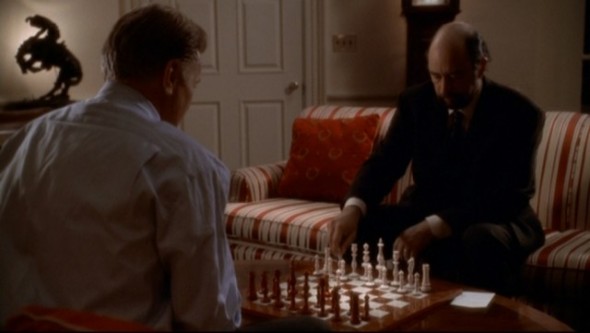 Even in Game of Thrones, set in an imagined world where chess doesn’t even exist, chess imagery is invoked with the war boards of Stannis Baratheon and Robb Stark. Just as in the scenes centering around chess boards, we see the same hunched over posture, the same board of distinct looking pieces. In each case, the purpose of the imagery is to depict the character as a strategist who can understand the bigger picture. 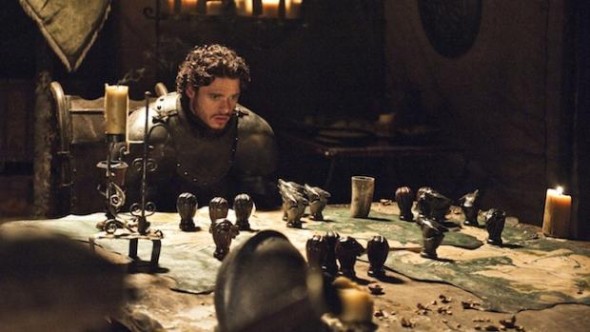 However, there are better ways to understand conflict than as a game of chess. Chess comes with a certain amount of metaphorical baggage that leaves it ill suited for describing the game of thrones’ structure. Chess features sequential moves, zero sum payoffs, perfect information, and most importantly an agreed upon set of rules. In Game of Thrones, figuring out the rules is only half the battle.

The game of thrones can be thought of as an aggregation of smaller sub-games consisting of the various conflicts that arise between characters. All contributing to the global state of affairs, but being played independently. Examples of sub-games include Ned challenging Cersei for control of the iron throne or the war waged between Robb and Tywin. However, not everyone knows the rules of the particular sub-game that they’re playing at a given moment, as these rules can vary wildly from encounter to encounter. The characters’ attempts to identify the rules of the sub-game becomes an associated meta-game. As a simple example, Robb Stark (King of the Northerners’ rebellion) only sees the movement of armies and alliances with previously non-affiliated families as possible moves in the “war” sub-game, while Tywin Lannister (the opposing commander) recognizes that a more complete rule set also includes the possibility of betrayal. This failure on Robb’s part occurs on the meta-game level and results in his inability to play the sub-game optimally. 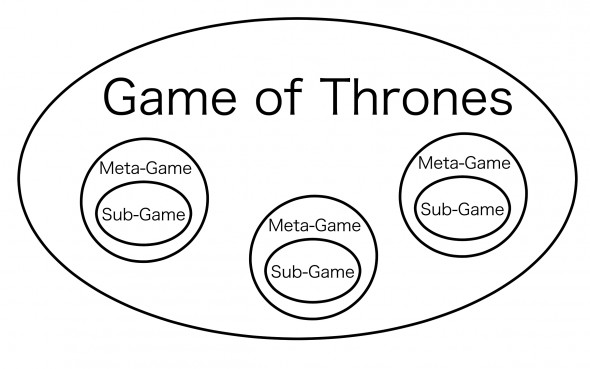 It’s like the Game of Thrones is a bag of M&M’s with chocolate sub-games covered in candy meta-game shells.

People who follow competitive online gaming (Starcraft, League of Legends, Hearthstone, etc.) will already be well acquainted with the concept of a meta-game. While a match of, say, Starcraft admits countless possible moves, usually the community only considers a handful of those countless strategies to be viable at any given time. The natural ebb and flow in popularity of different play styles, the development of new strategies and counter-strategies, the rippling effects of tweaks to the game mechanics by the developers, all make up a meta-game taking place outside of the individual matches.

The riddle that Varys tells Tyrion about the nature of power can also shed light on the nature of the rules in the game of thrones.

Three great men sit in a room: a king, a priest, and a rich man. Between them stands a common sellsword. Each great man bids the sellsword kill the other two. Who lives? Who dies?

Varys’s point, of course, is that none of the three “great” men in the room has any intrinsic power, but rather depends on the consent of the governed, represented here by the sellsword.

Power exists, where the people believe it exists.

Similarly, the game of thrones doesn’t exhibit any intrinsic rules. Rules present in the sub-games exist only where they are enforced by society (the sellsword). Sometimes this comes in the form of a corrupt city watch commander, an oath of fealty, or a giant army of recently freed unsullied. Failure to identify and adapt to the rules on the meta-game level often comes with a death sentence on the sub-game level.

Let’s see how this works with an example. 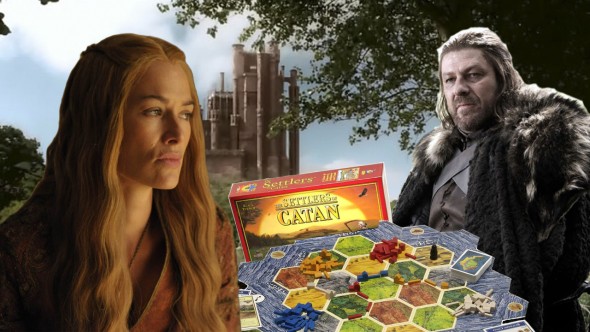 Mounting Lannister/Stark tensions in season one of the Game of Thrones HBO series come to a head when King Robert somewhat unexpectedly dies. Cersei Lannister, the queen, wants her first born to ascend to the throne, while Ned Stark, hand of the king (like the king’s chief of staff), thinks Cersei’s son is of dubious lineage. For all practical purposes the sub-game here is a bidding war. More precisely, it is a first-price sealed-bid auction.

The rules of the sub-game are simple. Each player is allowed to submit a bid (bribe) for the services of the city watch and whoever puts in the highest bid effectively controls the iron throne. However, neither player knows how much the other will bid. Since both Ned and Cersei must act without knowledge of the other’s bid, this represents a simultaneous move game in contrast to the sequential moves in chess. The game pivots around the sensibility of Janos Slynt, captain of the city watch. Since Janos plans to sell his loyalty to the highest bidder, the game becomes an auction. 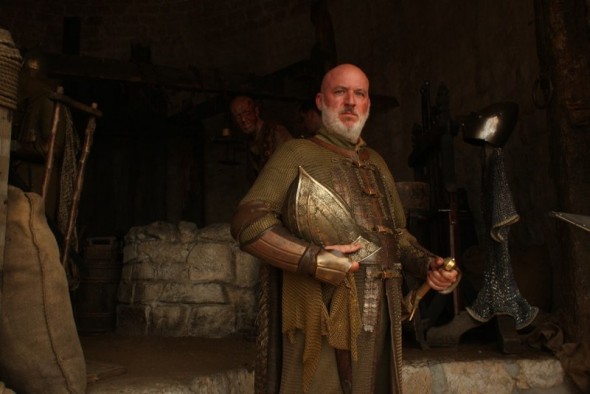 First up on the auction block: Janos Slynt.

On the meta-game level Cersei excels while Ned struggles.  For Cersei buying people off is second nature and when it comes time to play the sub-game her bid includes a lordship and a castle for Janos (a crappy castle that nobody wants to live in, but that’s still better than no castle).

Ned subscribes to the idea that the Westerosacracy operates under an agreed upon set of rules that must be followed. Ned personally executing the deserter from the Night’s Watch is a prime example of this. There can be no leniency even if he believes the deserter’s story. No one else can perform the execution, because “The man who passes the sentence should swing the sword”. However, no official mechanism exists to stop Ned from outsourcing the beheadings. This doesn’t mean Ned’s point of view is wrong in all sub-games. Indeed, it is specifically because they are rules in most sub-games that he believes in this universal rule set.

For Ned the sub-game is to find the “correct” successor to the throne. Once he’s obtained sufficient evidence of Joffrey’s illegitimacy he expects the rest of society will back him up. In particular he expects Littlefinger and the city watch will back him.

Why did Ned Stark misread the meta-game? Are other characters better able to learn from their failures and survive to play more sub-games? Come back on Wednesday to find out in Part 2 of this series!

Sean Nixon is a mathematician at the University of Vermont specializing in nonlinear waves and optics. Special thanks to Colin Nixon for helping to translate this article from twenty-three pages of Makhov-chains and differential equations into English.

5 Comments on “A Meta-Game Theory of Thrones”