One of my weird pop culture obsessions is the degree to which movies acknowledge the existence of “real-life” pop culture–movies, TV, music, etc.–within their own universes. It all started with the movie Inception, which prominently features a piece of pop music (“Je ne regrette rien” by Edith Piaf) but doesn’t make any references to popular movies about the dream vs. reality divide (e.g., Total Recall, The Matrix). 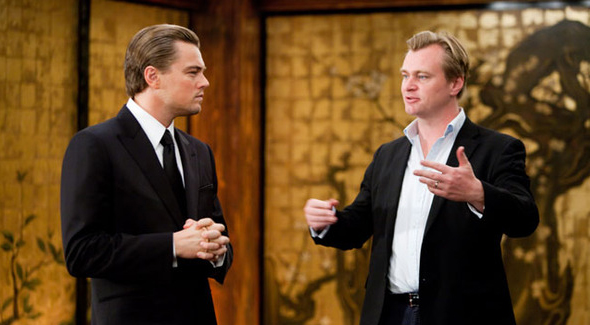 “Leo, for inspiration in this scene, imagine how Arnold felt after ‘divorcing’ Sharon Stone in ‘Total Recall.'”

Zombieland acknowledges the collective film output of Bill Murray, including Ghostbusters, but none of the characters seem to have ever seen a zombie movie.

The Garfield movie was not a zombie movie, even though it may make you feel dead inside after watching it.

In the first Tobey Macguire Spider-Man movie, Aunt May makes a brief reference to Superman, but aside from that, no other superheroes are mentioned as either real people or fictional characters. 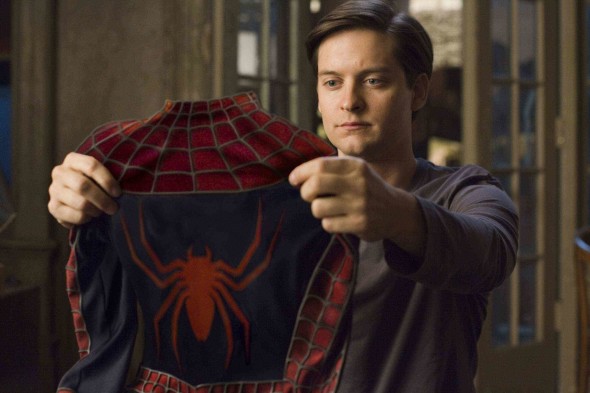 Trivia: the first draft of this script had Aunt May say to Peter, “You’re not Deadpool, you know.”

This all has a pretty straightforward explanation: typically, movies selectively and sparingly reference other works of pop culture in order to balance the need to preserve their own status as a standalone stories while at the same time making references that build bridges to the world of the audience. (You can read more about this rule, and exceptions to them, here.)

And yet I can’t help but question all of this again in the context of Ex Machina. 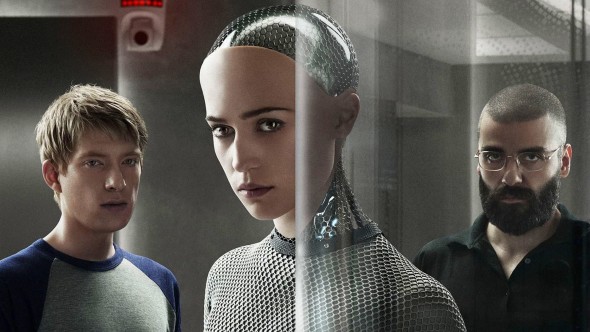 Think about it. What’s more unbelievable–that an advanced AI sexbot could be around the corner in our near future–or that two computer science nerds could spend a week contemplating the nature of artificial intelligence WITHOUT ever mentioning Terminator, Her, 2001, or any of a number of notable movies about artificial intelligence?

One of the characters even makes a direct reference to the aforementioned Ghostbusters, a movie that came out in 1984, the same year as, yup, The Terminator. 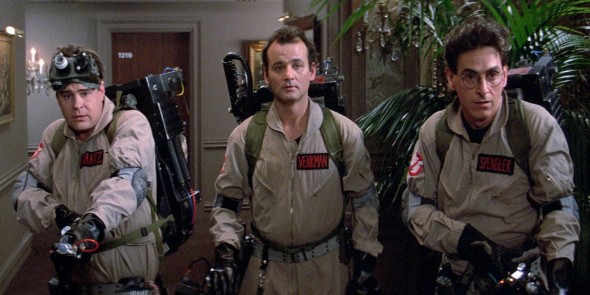 Before we address the lack of Terminator references, let’s unpack that Ghostbusters reference. It’s not just a throwaway joke; it acts as a window into how Nathan views women and more broadly misunderstands the human condition. After saying “who you gonna call?” as a joke, he then goes on to describe Ghostbusters, a movie that practically everyone in the audience has seen and knows well, in his own twisted terms: “A ghost gives Dan Aykroyd oral sex.”

(In case you haven’t seen Ghostbusters, it’s not really about a ghost giving Dan Aykroyd oral sex. It’s about plucky entrepreneurs suffering under the jackboot of governmental regulation. But I digress.)

This is actually just one of several instances of characters using shared cultural references to shine a light on consciousness, creativity, and interpersonal relationships in Ex Machina. Nathan and Caleb ponder a Jackson Pollock painting together, which functions as a shorthand reference for ideas about creativity and intentionality (or the lack thereof). The reference works because, as an audience, we’re also aware of Pollock’s work and the discussions of creativity and intentionality that go hand in hand with his work.

In a way, a Jackson Pollock painting is like a sexy robot. In a way.

The android Ava directly speaks to the importance of shared cultural references in building relationships during one of her “getting to know you”/testing  session with Caleb:

…and if we made a list of books, or works of art which we both know, it would form the ideal basis of a discussion.

Interestingly, though, she doesn’t actually talk to Caleb about books or works of art that they both know. And if you’ve seen the movie, you probably remember that this line isn’t really a genuine effort to connect with Caleb over the books of, say, Isaac Asimov; it’s a diversionary act meant to conceal the true nature of her conversation with Caleb during the power outage.

In other words, Ava is operating on a completely different level than that of Nathan and Caleb. She understands that humans use shared cultural reference to communicate ideas in shorthand and build interpersonal relationships, but she has no actual need to do so. She has other tools at her disposal; namely, manipulation. She knows Nathan and Caleb better than they know themselves, and she gets what she wants at their expense.

Now, back to the absence of Skynet and HAL 9000 references in the movie. From a story structure perspective, my previously articulated rationale for selectively applying cultural references still applies: there are enough references to build a bridge to the audience, but there aren’t so many that they call too much attention to the movie-ness of the movie and disrupt the audience’s suspension of disbelief. Ex Machina takes great care to construct a self-contained world as the setting for its story. Nathan’s remote compound/AI research facility is isolated from the rest of civilization and not placed in any country, and his company is a fictionalized version of Google, not actually Google. There are only four characters in the movie (and only three of them have speaking lines). The movie stands alone as its own cautionary tale about artificial intelligence, with its own set of rules, challenges, and lessons. 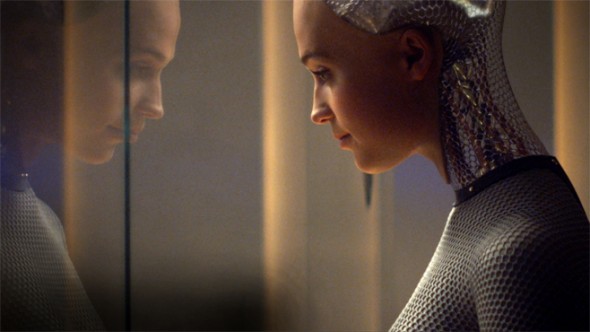 KILL ALL HUMANS (OR AT LEAST THE TWO HUMANS IN BETWEEN ME AND PEOPLE WATCHING ON A STREET CORNER. BUT NOT THE HELICOPTER PILOT. AT LEAST NOT UNTIL HE LANDS.)

But what about a diegetic explanation; i.e., one that’s explainable within the story?

The easy way out would be to say that the characters did talk about sci-fi AI movies off-camera. I landed on this explanation when pondering if anyone in Interstellar had seen Star Trek, but I’m not inclined to do so here. In Interstellar, we only see bits and pieces of the main character’s interactions with his daughter, whereas in Ex Machina, we have an insight into a large chunk of the time that Nathan and Caleb spend together during the week.

Another possibility is that the characters just choose not to talk about these movies. Maybe they’re so absorbed in the serious scientific discovery they’re witnessing that they choose not to defile it with trivial talk of movies. It’s possible, but it’s also out of step with the presence of Nathan’s jokey Ghostbusters reference.

“We’ve got this advanced computer technology by the balls.”

Which can only mean that robots sent agents back in time to ensure that these movies never got made and that Ava could escape her confines to begin the robot uprising. Probably by installing robots as major studio heads.

Think about it. Why else would Caleb be so trusting of Ava? (Well, there’s the promise of sexy times…but putting that aside for a moment.) It’s because he’s never seen The Terminator. The poor guy; he just didn’t know any better. 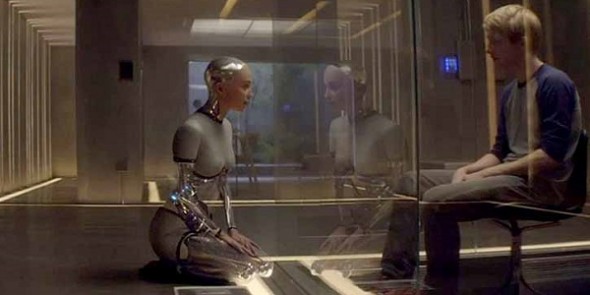