As I’ve argued before, the Capitol’s plan to quell dissent in the Districts—the Hunger Games—is not particularly effective (at least by the opening of the first book/movie). Instead of cowing the Districts into submission, the Games merely gave a stage for Katniss Everdeen to become the darling of the Capitol and Districts alike.  In Mockingjay, as a result of her notoriety, Kantniss is thrust squarely into the center of a propaganda war which rages alongside the very real war against the Capitol. But what is the relationship between the stories told about “The Mockingjay” and the lived experience of Katniss Everdeen? And what are the parallels to the stories we tell about veterans of war today? 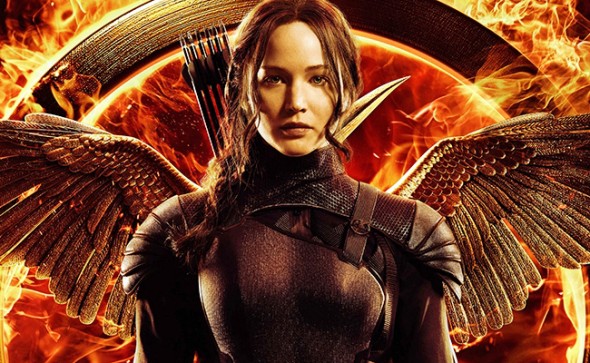 The seeds of this war were planted at the close of the 74th Annual Hunger Games. There, Katniss used poisonous berries as a way of threatening suicide instead of submitting to the Games’ cruel rules.  At the opening of Catching Fire, we learn that there are two dueling interpretations of this act: to many in the Districts, the berries represented an act of defiance, and a sign that the Capitol can be bested; to many in the Capitol, the berries were merely an act of hopeless love, a Romeo and Juliet for the post-apocalyptic dystopian era.

While the stakes change in the final movie, the duel between these two narratives stays largely the same: The Capitol wants the people to believe that Katniss is one of them, and District 13 still needs Katniss to be their “Mockingjay. They want to use Katniss as the  platonic ideal of what it means to be a Rebel Against the Capitol. And after some difficulties *pretending* to be a rebel, it turns out that Katniss is quite good at *actually* being a rebel. The Mockingjay that appears on D13’s pirate broadcasts is everything that they need her to be – she is defiant in the face of unspeakable horror (the bombing of a hospital), while showing a depth of humanity in singing the haunting “Hangman’s Tree.” 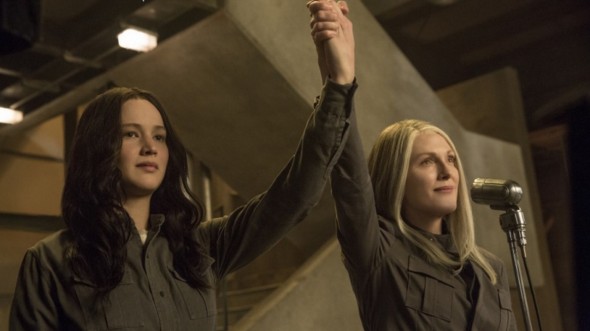 The Capitol, of course, has its own narrative. The Capitol sells the story that Katniss is just a romantic hoping to save Peeta, and that she either doesn’t intend or doesn’t understand her seemingly defiant acts.  In the first two films, the Capitol used the threat of force to make Katniss sell this story, preening for the cameras and pretending to be in love; by Mockingjay, this story is instead told through the person of (a brainwashed) Peeta.  This narrative serves a dual purpose, both keeping up appearances for audiences in the Capitol and sowing the seeds of doubt in the Districts.

So for the rebellion, Katniss’ acts of defiance are a sign that the Capitol can and must be opposed; in the Capitol, where Katniss is still a star, these acts are the actions of a hopeless romantic with no desire to foment rebellion. For the Capitol, Katniss is glamorous; for the Districts, Katniss is dangerous.

But the opening shot of Mockingjay: Part 1 shows us a Katniss that is neither particularly glamorous nor particularly dangerous – she is huddled in a ball in a maintenance space somewhere in District 13, hoping everyone will just leave her alone. As the reader/viewer, we know that neither District 13 nor the Capitol’s story captures what it’s LIKE to be Katniss – what we might call her “lived experience.”

Fighting has changed her, and she is neither completely a rebel, nor completely a romantic.  To be sure – she IS a rebel, occasionally willing to go to great lengths and face grave personal danger to defy the Capitol. And to be sure, she IS a romantic, willing to do almost anything to save Peeta and her other loved ones.

But just as sure, Katniss is not the rebel that District 13 wants her to be – if there were some middle path that could guarantee the safety of her loved ones, she’d probably take it, rebellion or no.  Indeed, in Catching Fire, Katniss promises Snow that she’ll sell the story of her love with Peeta for exactly that reason.  Her best hope is be left alone with her loved ones, but cruel circumstances denies this option ot her.

So she is neither completely a rebel, nor completely a romantic.  But this is inevitable – a simple story will always paper over and obscure the nuanced picture of any individual. No 2-minute “propo” can fully capture what it’s like to watch your 12-year old friend murdered in front of your eyes; nor show what it does to your psyche when it is kill or be killed. 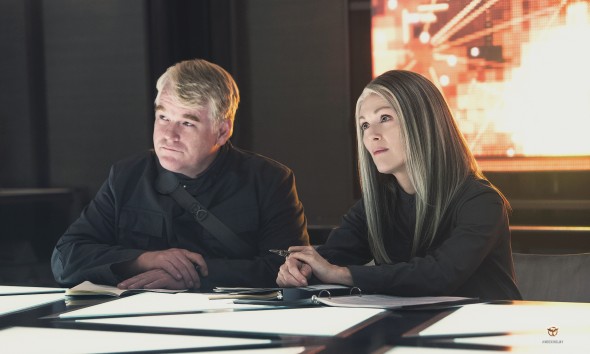 Perhaps because of my own experience in the military, I can not help but think of Katniss’ story through the lens of a veteran. Because I served on ships, I never got anywhere close to combat, but I am nonetheless acutely aware of that world. And it is not hard to spot the combat-veteran tropes invoked throughout The Hunger Games series: in Catching Fire, Katniss has vivid flashbacks of “kills” she was forced to make in her first time through the Games; in Mockingjay, we open and close the movie on an image of a Katniss that is psychologically and physically scarred by her “combat” experience.

What’s interesting is that the tension I discussed above – between the interior life of an individual and the political narratives built around that individual – is present not only in the propos of District 13 and the Capitol, but in the way we talk about veterans of combat and military service.

The individual experience of a veteran is as diverse and varied as any other institution with millions of members – prior to serving, those who served in the military come from all walks of life and backgrounds.  During service, the experience of each service member varies widely, from a desk job in Washington DC to driving a warship through the Pacific to humping a rucksack and a rifle through the Taliban-controlled mountains of Afghanistan. And after leaving the military, veterans can be seen in all facets of society, making art, starting businesses, Overthinking things, etc.

But it is far too easy to leave this individuality behind and force the modern American* combat veteran into one of two competing narratives: the Courageous Hero or the Downtrodden and Broken Victim. In the Hero story, the veteran was born waving an American flag, traveling stoically across the sea to do battle with a distant enemy and returning home unbowed and unbroken; in the Victim story, the veteran was exploited by forces beyond his control, forced into the desert, subjected to unthinkable tragedy, and is now a hollow shell, subject to either crippling depression or psychotic breaks. 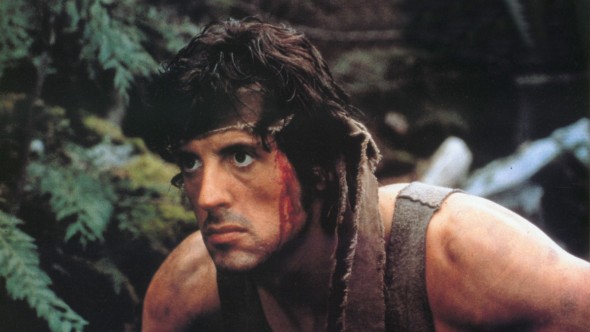 From First Blood to Rambo III, Rambo transitions seamlessly from one trope to the next.

In the Hero story, the veteran is set apart from society, put on a pedestal; in the Victim story, the veteran is also set apart, marginalized as an object of either pity or fear.  Unlike in the Hunger Games, neither trope is employed by just one side in a political conflict.  While there are certainly political groups that are more likely to chant “Support Our Troops” or “Bring Them Home,” the tendency to either lionize or marginalize runs across the political spectrum. As this excellent piece from the Atlantic puts it, the same civilians that “applaud returning troops in airports in outward appreciation, satisfied with their magnanimous deeds” are likely to view a veteran’s resume with “suspicion and fear about post-traumatic stress episodes in the workplace.”

But in the stories we tell ourselves, the actual living, breathing, veteran frequently becomes just a stand-in for an undifferentiated mass of Veterans.  Take, for instance, this video that followed from the recent tragic shooting at the Canadian Parliament:

If you are unfamiliar, the man in the video is Kevin Vickers, the parliamentary Sergeant-at-Arms who shot and killed a terrorist who attacked the building this summer. The video shows his entrance into the chamber the day after the attack, and the standing ovation he received from the assembled MPs (translation: politicians).

Now, I do not profess to know what is going through Mr. Vickers head at the moment I have cued up above – but keeping in mind that he shot and killed someone the day before, and reading the conflicted expression on his face, it is fair to assume that he is having a very different reaction to this round of applause than the politicians clapping for the cameras.

Throughout The Hunger Games series, Katniss is fighting two battles – a physical battle for survival and mental battle for her individuality. The first battle is waged exclusively against either her fellow Tributes in the Games or against the forces of the Capitol that try to kill her and her loved ones in Mockingjay.

But the latter battle is waged on all sides.  Throughout the series, Katniss is forced to portray a variety of different characters – the glamorous Tribute and Victor; the loving and devoted romantic; the fearsome Mockingjay. Neither side is content to allow Katniss to just be Katniss.  While District 13 is most certainly a preferable alternative government to the Capitol, they are more than willing to subvert Katniss’ identity if it makes her into a better Mockingjay for the rebellion.

As a result, we are ultimately rooting not just for Katniss to somehow survive but also for her to break out of the pigeon hole that both sides of the war seek to put her into. We are rooting for her to finally be given the freedom to be neither the rebel nor the romantic, but just a person trying to make their way in the world.

Read as a veteran’s tale, then, The Hunger Games has an important lesson to teach – whether you tend to think of veterans as heroes or victims, the most important thing to remember is that each individual has their own story to tell, one which is unlikely to match up with any simple narrative.

*: With apologies to veterans from nations other than the good old USA. I have a great deal of respect for many allied nations I’ve worked with, but my perspective is peculiarly American, so I didn’t want to speak to the experience in other places. For instance, check out this interesting piece that provides a contrasting look at the way that veterans are treated in modern-day Germany.

2 Comments on “Katniss Everdeen, Thank You For Your Service”