To celebrate the release of their new album, Four, Overthinking It asked One Direction fans to share their thoughts this week on the group they love so much.

In addition to her solid 1D primer, Hannah Foell offered this definitive analysis of One Direction’s musical influences, as informed by their fashion choices.

When a fandom watches a boy band with focus—with purpose—we tend to notice things. Patterns emerge, be it falling down on camera, hugging each other, or what the boys are wearing when falling down on camera or hugging each other. Many of us have noticed members of One Direction (primarily Louis and Harry) wearing t-shirts of some of rock and roll’s most iconic bands.

For some reason, this is met with derision. After all, people seem to think, what do pop bands know about anything harder than their own 1D-branded body pillows? Well, besides the fact that creators of populist media often have a great passion for and background in high art, who’s to say those bands haven’t influenced One Direction’s music?

In this investigative report I examine whether or not these bands are more than just window dressing. 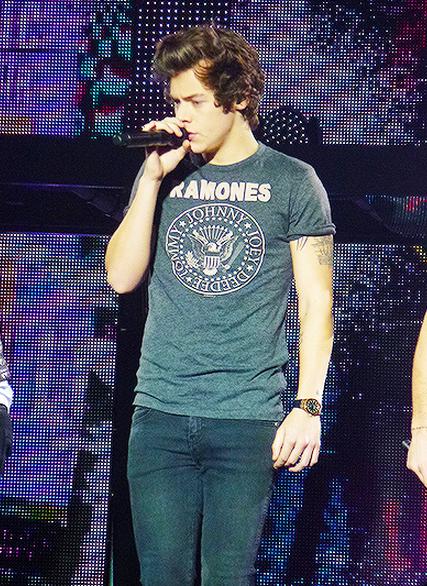 Given the increasingly blurred lines between pop and pop punk, it’s not hard to see the Ramones reflected in One Direction’s music. While not as blatant as, oh I don’t know, the use of  the opening riff of “Should I Stay or Should I Go” in their single “Live While You’re Young,” “She’s Not Afraid” off Take Me Home leans heavily on punk adornments, starting with them yelling “1-2-3-4!”

The punk influence has fallen away during their last two albums, as the band gained creative control and chased a more Mumford-y sound, but if you want to see a Boy Band that adopts the punk aesthetic completely, check out 1D’s protege group 5 Seconds of Summer.) 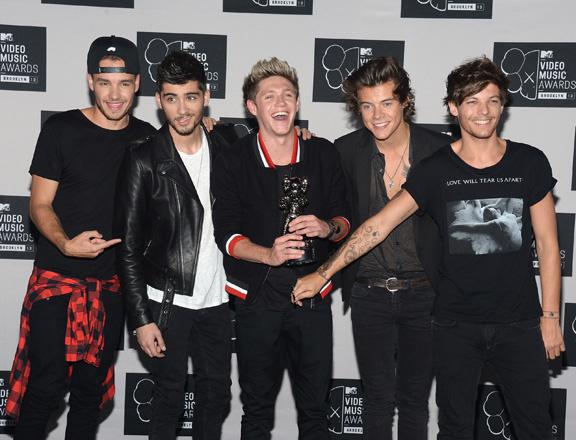 This is a dick joke.

Why is the bedroom so cold?
You’ve turned away on your side.
Is my timing that flawed?
Our respect runs so dry.
Yet there’s still this appeal
That we’ve kept through our lives.

Now, compare that with lyrics to “Up All Night,” the eponymous song of their debut album:

But I see you with him
Slow dancing
Tearing me apart
‘Cause you don’t see
Whenever you kiss him
I’m breaking,
Oh how I wish that was me.

While Ian Curtis wrote about being torn apart by the familiarity and monotony of a long term love, One Direction, being teens, are mostly being torn apart by the lack of an outlet for their excess hormones. Give them time. “Spaces,” a fairly bland ballad on Four is already hinting at the difficulties inherent in long-term relationships. 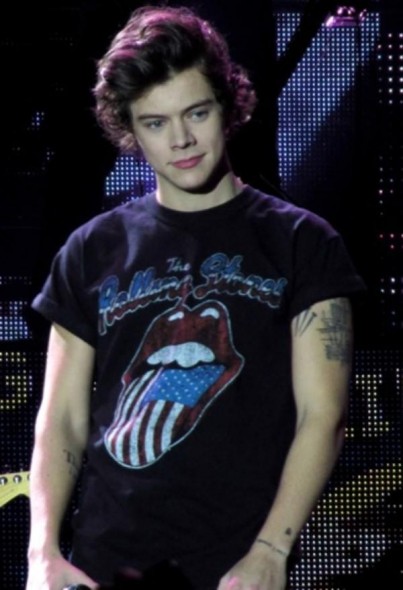 Yes, you are rich enough. You are worth many millions of pounds.

Harry has often been compared to Mick Jagger, but mostly related to his looks and swaggering sex appeal. It’s understandable, they’re both leggy and British and have a passion for scarves. From certain angles they do look startling similar, but is Harry’s music also carrying on the proverbial hip waggle?

“Little Black Dress” definitely sounds like it’s auditioning to be the 41st Lick. Its opening guitar riff comes in harder than most of their other recent songs, which err towards a folkier sound. It was recorded “in a live setting,” and I’m not quite sure what that means, but I’m pretty sure I can tell. Seriously, what’s more rock ‘n roll than recording your songs in an empty arena? 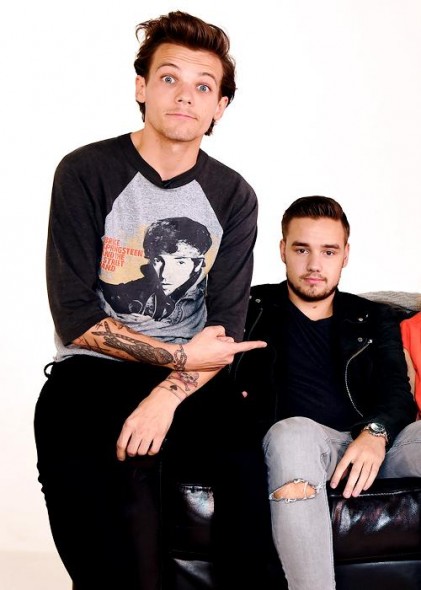 Neither of you were born in the USA. Don’t point to Liam, he was born in Wolverhampton, which couldn’t sound more British if it tried.

Off the new album Four, “Ready to Run” is a lyrical ode to Bruce Springsteen’s “Born to Run,” borrowing the Boss’ bold imagery of teen desperation, with just a small change in the title hinting at One Directions’ inorganic beginnings. This is a band that wasn’t born, they were assembled like one of Springsteen’s hemi-powered muscle cars, and now that they’ve fully matured they are Ready (to Run).

Just like Springsteen, One Direction’s sound has gotten folkier as their career has progressed. Musically, “Don’t Forget Where You Belong,” co-written by Irish tow-headed wonder Niall Horan, is the Boss-iest of all their songs—what’s more Springsteen than a swelling mid-tempo ode to your hometown and working class roots? 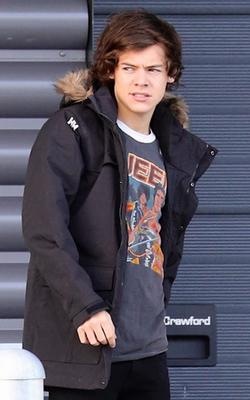 Is there even a single band out there that doesn’t want to be Queen? I don’t even play music and I still try to imbue some Freddie Mercury into everything I do. So why try to hide it? “Rock Me,” off Take Me Home, openly steals one of the most recognizable clap-and-stomp in of all time, that boom-boom-CLAP of “We Will Rock You.”

It’s shameless, but why be ashamed when it works so well? That simple rhythm under the verse paired with a blaring guitar anthem of a chanting chorus make “Rock Me” a fitting tribute to one of Queen’s killer classics. 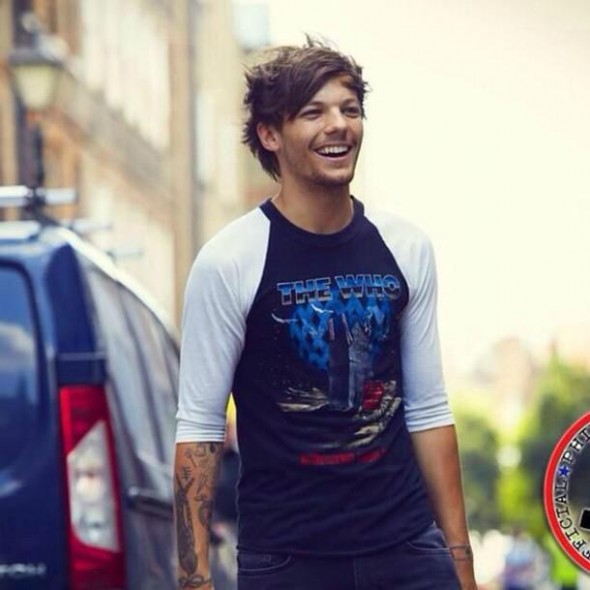 Is “Kiss You” the Baba O’Riley for a new generation? Only time will tell.

You’d be hard pressed to find a British pop or rock band in England who wasn’t influenced by The Who, and they’re called One Direction, not the One Exception. 1D has fully embraced the idea of power pop, a genre Pete Townshend literally named, even if it’s more rock-tinged pop than The Who’s pop tinged rock. “Midnight Memories,” which channels Def Leppard’s Pour Some Sugar On Me, feels like the most direct descendant from The Who, but I would make the argument that all but the poppiest of their songs have their roots there.

As a side note, if One Direction decided to create a pop opera as the final album in their contract I WOULD NOT complain. 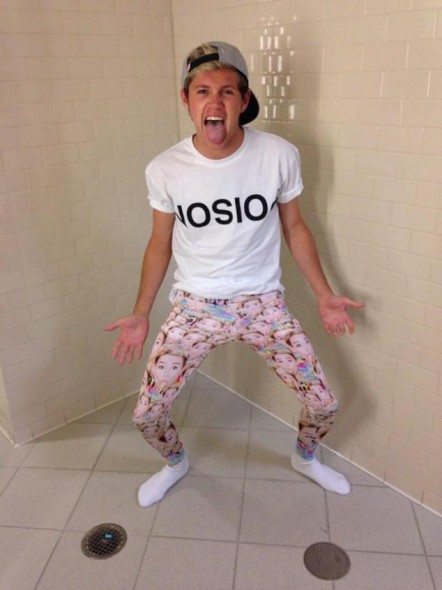 He could stop, but he won’t stop.

It’s not hard to find a link between the modern Miley Cyrus and 1D: MoZella, who co-wrote Cyrus’ hit “Wrecking Ball” also co-wrote the track “Fool’s Gold” off Four. But the songs sound surprisingly dissimilar, and the biggest common musical ground is between “Best Song Ever,” the first single off Midnight Memories, and Miley’s “Party In The USA.”

The bouncy, happy pop in both tracks exemplifies both Miley and 1D’s care-free early work, and is pretty far away from what both artists are doing today.

Other bands that I didn’t get to include Nirvana, The Stone Roses and The Killers! Leave your thoughts on One Direction songs evolved from those bands in the comments!

Hannah Foell is a video game producer by day, comedian by night, and Fast & Furious expert at all times. Her current projects include co-founding and producing Fine Line Comedy and The Kerfuffle, and performing with the improv troupe Maxitor. She is Louis af.

5 Comments on “One Direction’s Musical Influences, by Way of their T-Shirts”