A special thanks to Matt Crespi for his help in writing this article.

Batman Begins is the story of how Bruce Wayne Became Batman. The story is familiar – billionaire’s parents are killed; goes on quest for vengeance; becomes a ninja; uses his wealth to become a costumed superhero with a bunch of awesome gadgets.

There’s a scene relatively early on in the film that’s always stood out to me – young Bruce Wayne is in a rage, and he confronts Carmine Falcone in a bar. Falcone pulls out a gun and tells Wayne that he could shoot Wayne right then and there, and all his money can’t do anything about it.  And in the minute, Falcone may be right – the mobster has the network and connections to coverup a brazen murder, even of someone like Bruce Wayne.

But at the same time, you have to wonder about the wisdom of Falcone’s pissing off someone like Bruce Wayne and then just letting him go. Forget the whole Batman thing for a minute – Wayne is a billionaire, and money talks.

Estimates of the Wayne fortune vary, but we can safely put it in the neighborhood of $5B-$10B.  So he’s not Gates or Buffet level rich. But how does that compare with someone like Carmine Falcone? According to this estimate, $10B would be substantially larger than all but one of the biggest criminal ORGANIZATIONS in the world, much less the richest CRIMINALS. And remember, Falcone is a big wheel in Gotham but it’s still just Gotham as far as we know – it’s unlikely that the mob boss of a single city would get anywhere close to Wayne’s billions.

Falcone insists that “fear” is what makes real power, but money is pretty good too – how many of Falcone’s men would betray him for the $10M (or $20M, or $30M) bounty that Wayne could put out on his head without breaking a sweat? I made this observation to one of my best friends from college, and it got us to thinking: why DOESN’T Bruce Wayne just use his money to accomplish his goals? Couldn’t he  use his vast wealth to terrify the criminal element, instead of his vast muscles?

Which brings us to a related, but slightly larger question: Was becoming Batman REALLY the best way to fix Gotham City? 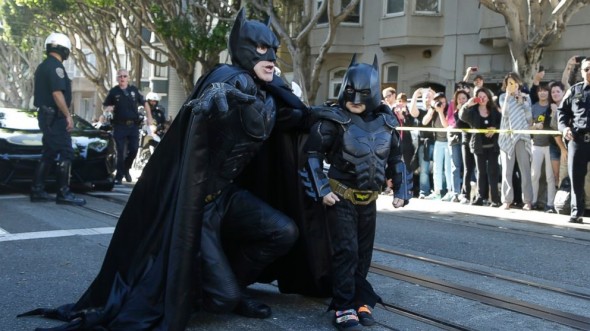 What Batman does is essentially charity – using private resources (fists) to produce a public good (criminals punched in the face).  And it’s entirely possible that the benefit of providing Batman-related services to Gotham might be outweighed by the benefit that could be produced if he provided different services to Gotham.

What I’m really getting at here is the concept of Return on Investment (ROI).  ROI has taken on an increased importance in the world of charitable giving, where there’s been increased focus on how to get the most “bang for your buck.” For instance, the Copenhagen Consensus asked the question: How could we spend $75B to make the world a better place? Shockingly enough, they didn’t come up with “vigilante justice.” Instead, they argued that the best way to spend money is in the area of childhood nutrition, particularly a focus on a particular bundle of micronutrients and medicines. They also recommend spending on malaria treatment, immunization for children, and deworming – estimating that for every $1 spent, you get nearly $35 in benefits.

So maybe that’s what Wayne should be doing – traveling the world and providing malaria treatments and immunizations to children everywhere. Admittedly, it’s probably harder to make a billion dollar movie about that, but hey, it’s probably a much better way to save a bunch of lives than anything involving a batarang.

Of course, that answer is too easy – Bruce Wayne didn’t want to accomplish generic do-goodery. He wants to clean up GOTHAM. He wants to root out the corruption and crime that led to the death of his parents. So one way or another, he’s going to be taking on Falcone. But still, we have to ask – Wayne spends years training himself to become a ninja, then spends millions and millions of dollars turning himself into The Bat Man. How else could he have spent that time, and could he have gotten a better return on that investment of his time?

(Of course, all of this ignores the presence of supervillains, who Just Want to Watch the World Burn, but young Bruce Wayne doesn’t know about that). 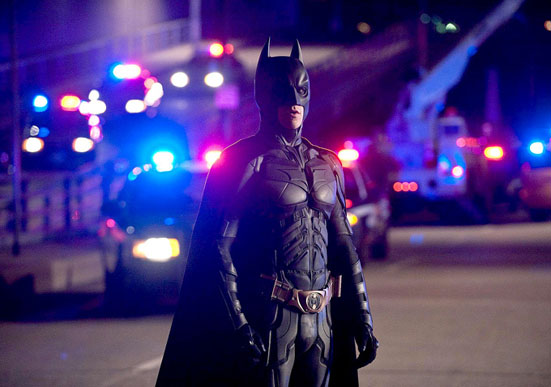 As far as I’m aware, no one has been able to quantify the Return on Investment (ROI) to “Batmaning,” but my suspicion is that it’s not particularly good. There are a couple factors working against “Being Batman” as far as results-oriented charitable giving goes: 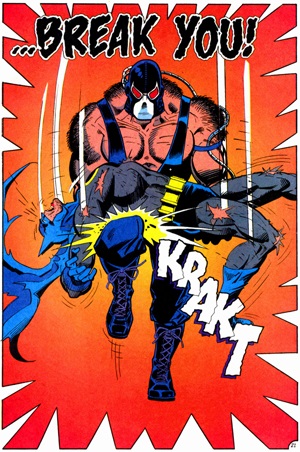 The importance of redundant systems.

On the other hand, a non-vigilante plan of action has a number of advantages working for it.

First, some assumptions: Wayne has a LARGE amount of money, but it is not infinite. $10B isn’t his income, it’s just his worth – so he can’t spend it all at once.  Also, Wayne still has the same problem that plagues many charitable organizations – he needs good people to help him.

From a naive standpoint, we can start with a simple proposal – what if Bruce Wayne just started buying stuff for the GCPD? If the problem is that the police are helpless to stop the criminals, why not just give them some extra help? For some problems, this might work – while the Batmobile does an OK job of protecting Harvey Dent from the Joker’s attack, you know what would work even better: if they could just transport Harvey Dent in the Batmobile. Joker’s semi-truck would have a hell of a lot of trouble catching that guy.

This solution, though, has two serious problems.

First, it’s unlikely that Wayne has enough money. For comparison’s sake, the annual budget of the NYPD is $4.8B – so even at a $1B/year, he’s only increasing the budget of the GCPD by maybe 20-25%. Second, even then, you won’t get 25% worth of actual benefit. The problem with the GCPD isn’t that they don’t have the resources to fight the criminals of Gotham – the problem is that they don’t have the will to fight the criminals of Gotham.  The corruption is endemic, and any money he pours into the police department is more likely to end up in Falcone’s pocket than fighting against his empire. So that’s out.

OK, so maybe the GCPD can’t be fixed with just more resources. Maybe Wayne should go for the “Harvey Dent” strategy – after all, according to TDK, “one evening” with Wayne and his friends will be all the fundraising a Gotham politician needs. With that strategy writ large, it’s likely that Wayne’s fortune could tip the entire elected city office structure towards an anti-corruption campaign.

Even then, of course, the threat of violent retaliation from the mob might make even the bravest Wayne-approved politicians nervous at taking them head-on. Instead, then, Wayne might want to turn his attentions away from Gotham city politics and towards politics at the national level.

From a tactical perspective this has a major advantage – historically, the FBI has been much more effective at fighting organized crime precisely because of the relative ease that organized crime can corrupt or intimidate local authorities. Put it this way – the Mayor of Gotham might be scared of Carmine Falcone, but the Director of the FBI and the President of the United States probably aren’t (the Secret Service make threats a little difficult).

From an economic perspective, this tactic is a little more difficult. Plenty of billionaires try to influence elections, and not all of them are successful. While an evening with Wayne and his friends might be enough to elect Harvey Dent in Gotham, it won’t make a dent in the vast sea of money that is Presidential politics.

So while Wayne certainly wants and needs Federal support for his clean-up Gotham campaign, it’s probably not enough standing on his own.

A billion dollars will buy a whole lot of bumper stickers….

Now we’re talking. If Wayne can’t reform the GCPD, maybe he can supplement it with a police department of his own – in essence, a private army. Obviously, he’s going to hire some ex-Special Forces badasses to act as his personal security.  But he needs more than just defense – he needs offense. And while mercenaries might do the trick for actual shoot-em-up operations, it’s not like he can just hire mercenaries to go out and start shooting up the mob: he’s trying to promote law and order, and that plan won’t last if Gothamites start waking up in a warzone.

So in addition to security, I think Wayne needs two types of employees for his Bat-Army

Ex-intelligence operatives with zero ties to Gotham: These are guys that know how to gather information, work behind the scenes, organize and investigate covert and criminal activity. The priority here is to ensure that they are as reliable as possible – you want them overseeing and planning the clean-up operations, and you need to ensure that they are’t corrupted from without. Ridiculously high salaries are a good place to start.

The goal here is to gather evidence so that the GCPD can make arrests, and, equally important, gather evidence exposing corrupt GCPD cops. Make it so that any police officer accepting a bribe knows there’s at least a 50% that the person offering the bribe is going to publish proof on the internet the next day; find the evidence that the GCPD won’t and then publish it or expose it in a way that can’t be ignored.

It’s counter-intuitive, but this is where possibly the best ROI can be found. Hire low- and medium- level mafia soldiers, throw them in a “Wayne Security” blazer and tell them that their new job is to provide security on the corner of 5th and Main.

The trick here is that for every one you successfully recruit, you’re not just boosting security – you’re also draining resources from Falcone’s organization. Of course, you need to worry about them retaining their old allegiances, but you make the salaries high and the consequences for even minor disciplinary problems immediate termination – use your core group of trusted operatives to monitor your ex-gangsters, and hopefully you can boost security all while undermining the very organization that threatens it. This is similar to the strategy employed during the “Surge” in the Gulf war – take the more moderate groups that had previously opposed the U.S. presence in Iraq and give them paycheck and a checkpoint to man.

I have no doubt there are some ways that this plan could be picked apart – potential ways that Falcone could fight back, or second and third order effects I’m not thinking of.

The important thing is that there are lots of ways to improve  city – and for every dollar spent Batman-ing, there’s one less dollar to spend politicking or paying for neighborhood watch associations.

Which is why I throw it out to you, Overthinkers: what should Wayne be doing with his fortune to improve the city of Gotham? How else could he tackle this problem, in a way that doesn’t involve actually tackling anyone? Sound off in the comments!

15 Comments on “The Dark Knight ROI’s”