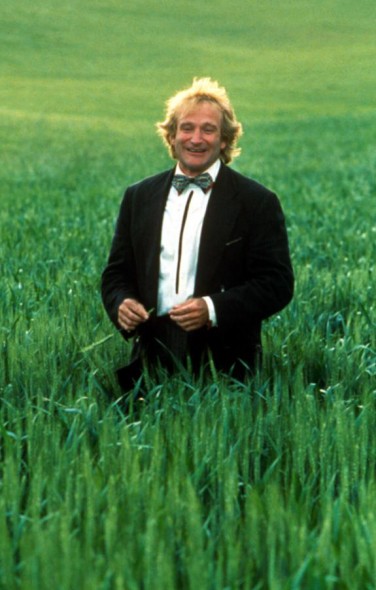 It might be the comedian circles I run in, but I’ve never seen as uniform an outpouring of grief on Twitter as I saw for Robin Williams. People were calling on each other to silence their pre-scheduled tweets on other subjects, disseminating journalistic guides on how to talk about depression, and rapidly organizing into a grieving body of universal membership. Everything from ISIS to dick jokes to Starcraft strategy fell away in a collective moment of shock, sadness, even horror, at the knowledge of his death, and the prospect of his potential suicide.

Not that his achievements were immeasurably greater than those of others, or that he achieved some sort of apotheosis, although perhaps the notion of him did in the minds of the people who connected with his work.

The Doubtfire in Plato’s Cave

The taxonomies of childhood resemble certain compelling notions of ancient Greek thought — that there is a Kingdom of animals, that the Shapes and Letters exist in an abstract land where they talk to each other, or that the essences of each Ninja Turtle were eternal and inherently distinct.

In this realm of ideas, Robin Williams was irreducible. From the perspective of a child who grew up loving Mork & Mindy reruns and arriving at Aladdin as an object pre-existing comprehension, as one might come upon a sunset or a waterfall — Robin Williams was a pure thing. A rush of feeling accompanied his presence in any project, like the Quickening in Highlander, or the shuffle of chairs, drinks and feet to the inevitable initial chords of “Don’t Stop Believin’.”

I can’t say Robin Williams was part this or part that — part genius and part channel changer, part clown and part uncle, part mentor and part pet — and mean it. Some combination of the capacity for connection in all things,  distinct style, tempo, and voice, and sense of joy — elevated additionally by the relative failure of his imitators — seemed all one essence, indivisible and unique in the universe. Whether the bat in Ferngully or one of the guardian spirits of Comic Relief, Robin Williams was either there or he wasn’t.

The Player and the Toy

Although of course even as the man inspired so much connection from the public, it was connection with the outward measure of identity, the construction, the creation, the work and craft — the Robin Williams that we all know was a projection — as unreal as one with a giant Greenland and a tiny Africa, with every other country a vivid pink or purple from space — of the internal life of the man.

I don’t presume to know what Robin Williams experienced. I never knew the guy, and I don’t really know what happened to him. Of course, I’ve remarked on and honored the connections we draw with celebrities in a desire to connect and know. I believe it is ultimately rooted in goodness and love, and in a basic understanding of the person as a thing that commands compassion, in a way that the institution or statistic does not.

But the Robin Williams behind the mercurial spirit I know is a stranger. It seems inappropriate to say he “has been” a stranger — as if I was somehow owed devotion from him as a fan and was thus betrayed. The truth is not there. But I don’t know him.

And it is harder to relinquish to the Valley of Death the Robin Williams that I do know — who seemed such a force of nature that when Robert Sean Leonard, Matt Damon or Baron Munchausen made pilgrimage to sit at his feet, we sat there too — it is harder to understand that this man has died while at once being reminded that this life that began and ended as its own experience was entirely behind a veil.

It’s veil that falls between almost all people, and that is almost impossible to ever pull aside. And there’s a falseness to the thought on the occasion of suicide that “you don’t ever really know anyone” — because this is no more or less true when lives come and go by all the other means. It’s the problem of other minds, the body as the prison for the soul, or any number of other inadequate explanations.

There is some comfort in knowing that the Robin Williams on our side of the veil, the Robin Williams we knew — even as a projection or reflection might not give the true account of the burning source that emitted its light, it can cast its light into the distant deep, far into space.

The reflected, refracted, charged and elemental Robin Williams, as starlight bounced off moons, loosed through the vast void, or shrank and exploded through telescope lenses and corneas, will never be destroyed. It can only transform.

Robin Williams bid us farewell through a variety of characters — yearning, aspirational farewells — and it seems too much to layer on the context of each, as they take on new life in this dark moment. I’ll invite you to only to see them again and draw your own connections.

There are many more such scenes – please hunt them down and share them in the comments.