It has come to our attention that the Chinese military has mastered, combined, and weaponized two of the West’s most valuable technologies. OTI Defense Correspondent Ben Adams has the story.

Press coverage of the Chinese military has a tendency to land somewhere between “alarmist” and “breathless,” but there’s no denying that China’s military, the People’s Liberation Army (PLA), has made staggering  technological gains in the last 10-15 years. In 2011, the U.S. announced that its foreign policy and national security strategy would be undergoing a “Pacific Pivot.” While my colleagues here at OTI are deeply engaged in the ongoing (and recurring) music video crisis in Europe, I’ll be engaging in my Pivot to East Asia in this space.

It’s been said that imitation is the sincerest form of flattery. And the PLA is known for its “flattery” of other nations’ military technology. For instance, the picture on the left is the U.S. F-35 fighter. The picture on the right is the PLA’s “J-20” aircraft.

Or wait, maybe it’s the other way around. Or….OK, you get the idea.

Until now, this process has been restricted to minor weapons systems, like fighter aircraft, long range rockets, aircraft carriers, and missile submarines. But today, I came across undeniable evidence that the Chinese military now has access, and is exploiting the U.S. military’s most powerful technological marvel: Top Gun technology.

No, not the technology used at the Navy Fighter Weapon’s School, the Navy training base. I’m talking about the 1986 Jerry Bruckheimer film starring Tom Cruise, Top Gun. I’ve discussed the vital and central importance of this technology before, and when it came out, Top Gun proved its strategic might by boosting recruitment numbers.

Now, there is indisputable video evidence that the Chinese military has acquired this technology, and indeed, has already deployed it in the field:

China has been developing its naval aviation/aircraft carrier force for the last decade, and the video above was produced by AVIC, the Aviation Industry Corporation in China.

China has attempted to appropriate the secrets of Maverick and Goose

before. In 2011, the technology was still just a copy of the American original, lifting actual footage from the original film and inserting it into state television broadcasts.

So this development fits with a broader pattern of Chinese military technological development: first, copying, buying or “acquiring” technology from abroad; and second, turning to China’s considerable industrial and technological base in order to produce a “home-grown” version of the original technology.

For instance, the Chinese Navy (curiously called the People’s Liberation Army Navy), purchased the (mothballed and incomplete) ex-Soviet aircraft carrier Varyag  in 2007; after extensive retrofitting, they re-christened it the Liaoning in 2012. Just one year later, they announced that the construction of a new, entirely home-built carrier.

They have been hard at work learning the ins and outs of Naval Aviation, a complex a technically difficult task. Launching aircraft from a ship at sea is a demanding challenge, and one that can’t be learned overnight. This video demonstrates the break-neck speed of the Chinese military revolution. It took the U.S. Navy decades to develop and perfect Top Gun level-technology: as the following breakdown of the video shows, the Chinese have perfected this technology in just a handful of years.

We all know that the only way to properly capture the beauty and grandeur of naval aviation is by showing guys on the flight deck, prepping planes for takeoff against the rising sun. And this video has it in spades: 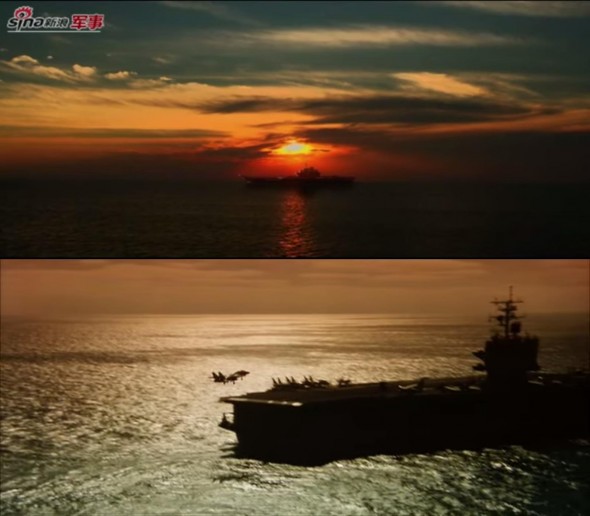 Aviation fact: Lift increases by 10% when aircraft is lit softly from behind by the rising sun.

The meat of any Top Gun technology deployment is going to be the loving shots of airplanes. Airplanes in hangars; airplanes on elevators; aircraft being prepped for launch; aircraft launching. Compare the first two minutes of the AVIC video to the introductory sequence to Top Gun:

It’s pretty just an ode the awesomeness that is the airplane. Of course, you need more than that to make a proper use of Top Gun  technology. You’re also going to need……

Because Naval Aviation is about more than just noble sunrises and awesome fighter planes. Sometimes it’s just about bro-ing out with your wingmen, playing volleyball or pumping iron. Without your shirt on.

Clearly, the PLA Is perislously close to mastering Top Gun technology. But Top Gun is more than 25 years old – “Surely,” you might say, “there’s nothing to worry about if China is only exploiting it effectively now.” But military technology can proceed by leaps and bounds, particularly when advances from one source are combined with advances from another. And that’s exactly what seems to have happened here.

If you haven’t been following our Eurovision coverage, you can check out this primer on the phenomenon from last year’s contest. Essentially, it’s a music video competition featuring songs produced by each European country and voted on in a massive summer-long contest. The videos come in varying degrees of quality and cringe-inducing wierdness, particularly to the American eye.

And exactly at the 2:00 minute mark of the AVIC video, what looks like just a top-level Top Gun knockoff takes an even ominous and dangerous turn:

Put it all together – my friend, you have yourself a Eurovision video. China has taken the greatest entertainment properties from both the United States and our NATO Allies, and adapted them for military use . This is a worrying development, one which I urge our elected leaders and Michael Bay to address.

There are, however, a few signs of hope. First, there are no signs that the Chinese military has yet mastered the proper deployment of Kenny Loggins and varying Zones of Danger – while the intro music to the AVIC video is passably schmaltzy and sounds like it could be from the score of almost any American blockbuster, Top Gun is not just *any* American blockbuster. “Danger Zone” is and will remain quintessentially American; for now, at least, we retain a solid acoustic advantage.

Second, and perhaps most importantly, while the Chinese-Top-Gun video has several shots of Chinese sailors working on the flight deck, waving their arms and pointing at aircraft before they get launched by a catapult, we still have this guy:

No matter how hard the budgetary axe falls, or how bad our cybersecurity gets, America will always have that little extra swagger. A military that gets the job done with professionalism and personal initiative, relying on a can-do individualistic spirit. The technology gap may close, but we’ll always have That Guy who doesn’t just send 40-thousand pounds of aircraft into the sky with a wave of his arm – he does it in style.