Last week on NBC’s Community, Abed tried to impose a story structure on the goings-on of Greendale, but what kind of story is this, really? We’ll have to answer this question if we’re to guess the end of this season’s finale, which may be the conclusion of the series as a whole. 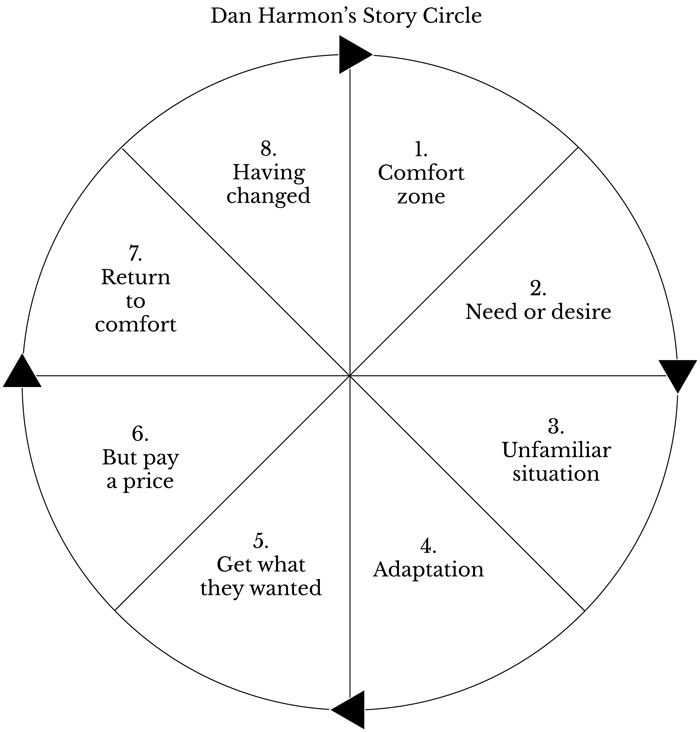 According to the circle, Community is a heroic quest: characters enter an unfamiliar situation to get what they want, and they eventually get it, having lost something and having changed. Twentieth century literary critic Northrop Frye would call this a story in the “romantic mode,” which features larger-than-life characters, heroic trials, and bittersweet conclusions.

Abed wants to be in this story. He talks about calls to adventure, crossing the threshold – all that Joseph Campbell stuff you learned in high school (or at your local Star Wars convention). If Community is a romance, it will end when one society fades away and a new one takes its place. Greendale will diminish into an empty, magic-less Rivendell, but the study group will triumphantly enter the Fourth Age of Man and create a new, more grown-up society outside their community college borders. 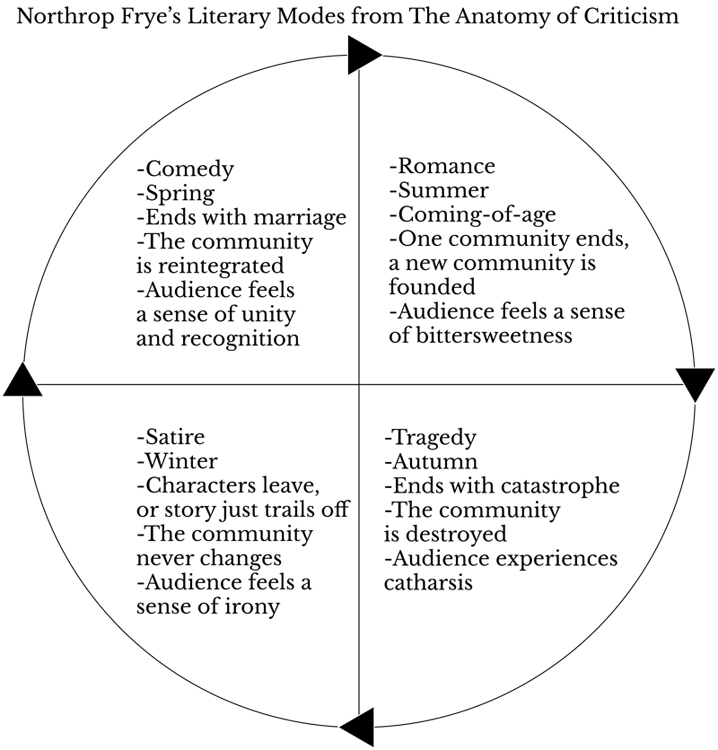 Jeff and Britta are trying to force Community into a different story mode: the mode of comedy. Here’s how comedies work, according to Frye: two people want to get together, something temporarily prevents them from doing so, and finally they get married. In traditional comedies and modern Bollywood movies, meddling outsiders (like parents or Annie Edison) prevent the couple’s legal union. But in most modern rom-coms, the threat is internal. The protagonists have character defects that must be fixed before they can finally mate. In either case, their marriage brings the community back together. All its conflicts resolved, the society can continue, happily ever after.

It’s normal for a sitcom to end with a wedding, but I think Community‘s too subversive and meta to be so straightforward. Anyway, we’re not sure if the show’s ending at all, and a season 6 with a married Jeff and Britta would just be weird. 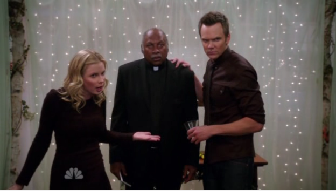 Another option is that Community‘s in Frye’s third story mode: satire. This is the mode in which no one no one learns a lesson and no one ever, ever changes. Overthinking It’s own Pete Fenzel has made this point before: most of the humor in a sitcom stems from the characters’ unchanging natures. We laugh at Britta because she’s always going to Britta something. We laugh at the dean because he’s always got a new costume.

Satires usually end in one of two ways. Either the characters remain stuck in their unchanging society, doing the same things forever and ever, or they say “to hell with this” and, unchanged, get out of Dodge. If Community‘s a satire, it could end semi-darkly, with the characters remaining in Greendale forever, trapped in the loop of syndication on TBS.

Or maybe Community will figure out a way to combine all these different endings. I foresee a final Jeff speech where he learns the lesson that life doesn’t need a lesson. Community‘s community may leave the boundaries of Greendale, but it will ultimately remain unchanged. At the same time the characters will be changed, because they’ll have freed themselves from their compulsion to change themselves. The sitcom they live in will then end just as they accept themselves as sitcom characters, and they’ll find their happily ever after by accepting that life has no happily ever afters. Abed would like this ending, I think. I’m getting confused just writing it.

I guess we’ll have to find out this Thursday. Until then, all we can know for sure is that Rust Cohle was half-right. Community, at least, is some kind of a flat circle.