In the vacuum of space—absent quotidian human experience—space debris (the product of countless launches and collisions) is the protagonist’s internal existence made manifest.

Hard science fiction stands out among the myriad subgenres of science fiction for its tether to reality. Projecting a possible future, one based on a thought or trend extrapolated into the future, produces fantastical stories. It is when the mysticism and fantasy are stripped away, when the need to world-build is less, that the focus returns to the character; the arid expanse is populated only by the most essential diegetic elements: characters, astrological bodies, and the void.

(Presumably the menial tasks like garbage collection happen off-screen, much as the mundanities of procedural police work do not often appear on screen as they do not serve to advance the plot, themes, or characters with the show. Unless of course there’s a point to be made of the ability—or lack thereof—to withstand drudgery and its relation to the events usually depicted.)

Gravity understands intimately the genre it is working within, wasting little time establishing its setting, instead focusing on revealing character through dialogue. Close-ups shots are employed liberally to center the audience’s focus on the character, and the lack of non-diagetic sounds emphasizes the claustrophobia of seeing nothing and hearing only breathing (think: scuba diving, or even snorkeling in deep water). The human figures, often fading into the inky dark they float in, are removed from trees and houses—familiar reference points typically used for audience orientation.

The confounding effects of environmental disorientation on display here are also readily observed in the post-apocalyptic survival tales, in which the locations isolate and draw attention to the characters; their internal and external struggles are cast against an unbending, unforgiving nature. Such scenarios replace or use as metaphor the typical dangers—people, monsters, biology, nature—to represent a political, sociological, or anthropological issue. Non-human (or semi-human) forces are ready proxies for authorial metaphorical intent, serving to highlight the characters’s internality. So it is with space debris featuring prominently in the film Gravity and the anime Planetes, in which the fast-moving unstoppable force representing personal issues is not weather or other humans, but trash.

Of the space-related events that commonly find their way into popular media, space debris rarely appear. Little thought is given to the pieces stripped away from rockets as they ascend. These are monitored and dealt with by space agencies seeking to manage this orbitl population, predicting potential collisions between objects in space. If space exploration and habitation is to move beyond its current state, increasing the volume and frequency of traffic within earth’s orbit, the danger posed will be significant (at least to these characters). 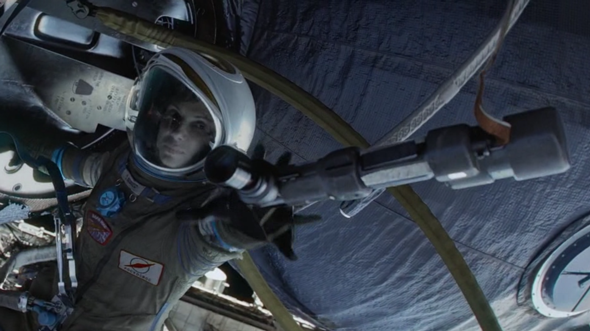 A single piece of debris—seemingly innocuous in the vast vacuum of space—derives its deadly potential not only from speed but through the creation of a branching reaction. The collision of one piece with another can create hundreds or even thousands of new fragments, each endowed with its own destiny. Trees of these splinter events, known as an “ablation cascade” or Kessler Syndrome (after Donald Kessler who published several papers on the density of asteroid debris and was director of the NASA Orbital Debris Section) has thankfully been avoided thus far.

The collision of debris—one piece into another—creating a causal branching of events that plays out across the sky is an example of the butterfly effect and how we consider our actions and their consequences in our social and emotional lives. One seemingly unrelated or insignificant action derives a cascade of events that finds its seeming apotheosis in—real and fictional—liminal social spaces.

Clear skies with a chance of satellite debris

In the opening minutes of Gravity, an accident causes a satellite to disintegrate, creating an orbital debris field that propels the movie throughout its thrilling 91 minutes. Operating as a force of nature, in the same way a tsunami or hurricane would, the debris force the two protagonists to act in self-preservation. Kowalsky (Clooney) is the older of the two and on his last flight before retirement. Outlined in broad strokes as an All-American-Hero, his character-level function is to illuminate the character of Dr. Stone (Bullock). Kowalsky, in the time he is onscreen, often talks of the record he hopes (but does not expect) to break, while calmly processing and reacting to the disaster unfolding around them. For this man the debris is less a representation of his inner turmoil than the disruption of the calm he finds in space by his imminent retirement.

Stone, we discover, has recently experienced the loss of a child, an event from which she has not been able to recover. Driving in no particular direction with the radio tuned to no particular station, she holds the moment when she “got the call,” able to move neither forward nor back. The escape to space is another way to express this, a place devoid of connections to past trauma is another form of “driving.” For Stone, the debris function as the entanglements and complications she struggles escape and avoid processing in her day-to-day existence. They are a reminder that there is no way but though her emotional maelstrom.

I get it. It’s nice up here. You can just shut down all the systems, turn out all the lights, and just close your eyes and tune out everyone. There’s nobody up here that can hurt you. It’s safe.

The initial event continues to assault Stone (much as nausea rolls in waves), shattering the surrounding environment and cutting off her means of escape. The aftermath of each successive deluge leaves her in a state of repose, as if shedding the flight-or-fight state like a chrysalis allows Stone a form of emotional rebirth. In the intervening 120 minutes the projectiles take to circle the planet, she floats, free of her ‘space’ skin, among the relics of the previous ISS inhabitants. The disarray they have left behind in their rush to evacuate retards her escape attempts, a reminder to Stone of the emotional debris she shelters from. 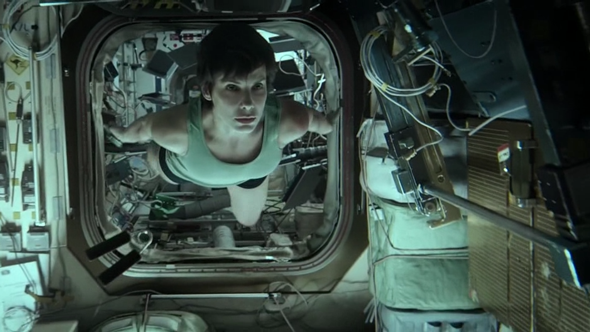 A deployed parachute, traditionally a safety net, snares and holds her means of escape, but the message is clear: This is not an exit. Only by dealing with the havoc wrought by the debris she can move on to her next destination and it’s promise of salvation. As each region of chaos is waded though, a form of emotional maintenance is being conducted.

And the days we chance upon…

Gravity is a film in which events unfold in reaction to an initial incident. This is in keeping with the metaphorical log-line of the story, but the actions of its protagonists are purely reactive, having time for little else. Planetes, an episodic Japanese anime, is centered around the salvage and disposal of space debris by the members of “Debris Section,” a division of the Technora Corporation. Conducted on a regular basis (each episode typically involves trash in one form or another), the collection of debris takes on an active role, often preventing serious damage to existing structures.

Abandoned artificial satellites. Tanks jettisoned from shuttles. Refuse generated during space station construction. This junk, space debris, is traveling around the Earth at speeds approaching 8 km/s. This is a story of 2075, a time in which this space garbage has become a serious problem.

Planetes is a 1990s Japanese anime that promotes the ideals of hard-work, ambition, and friendship with the unflagging optimism characteristic of many Japanese animations. Nicknamed “Hachimaki” after the headband he wears, the male protagonist dreams of one day owning a space ship. His job in debris section is unlikely to result in the ability to purchase such a craft, but the job carries deeper significance for him. The eventual goal of ownership is to be “together”, or “whole,” in a space he spends his days cleaning of scattered parts. In other words, in Planetes the characters conduct emotional maintenance with the scattered debris representing the building blocks of developmental maturity. 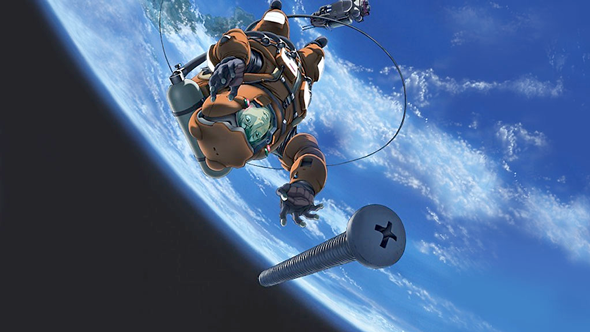 The maintenance and work done by the astronauts in Planetes takes an active role, where work conducted on stray elements in the environment force character developments to the fore. While there are occasionally crisis situations which must be dealt with to maintain harmony, the space-based garbage collection can be thought of as work done on the individual’s emotional infrastructure, and consequently the immediate environment they inhabit.

Sent by the company on missions to ostensibly prevent potential collisions between existing structures, these objects regularly visually represent the quandaries presented to the characters. In “Like a Dream,” Hachimaki must manually maneuver (almost as if though willpower alone) an satellite out of the path of a civilian transport ship, debris he had previously failed to deal with. Confronting his dream of ownership, a dream he has held on the previous failure, he must save a ship similar to the one he hopes to one day own. He must prove to himself his competence and break free of the loop he feels stuck in.

Planetes deals extensively with the difficulties of surviving beyond the natural habitat of the earths atmosphere; radiation poisoning, brittle bones, and isolating experience of space are touched upon. The remove from geographic references of ground and sky confronts characters with the notion of borders and nationality. Many incidents from the show deal with a society that is still preparing its first manned steps to the outer planets, but various factions dispute this move, arguing that a failure to fix earth’s environmental and social problems before further exploration is a mistake. “Regrets” features a criminal crew that dumps waste in orbit, providing an opportunity to showcase Hachimaki’s mentor and his radiation sickness. The debris, a proxy for environmental issues of planet below find its way into space, and the local environment exacts its toll upon its inhabitants. He opines of riding his motorbike by the ocean, accepting the danger and doing it anyway; much as he collects space debris despite the consequences.

The salty wind off the sea is really bad for machines, but I rode my bike along the seaside roads all the the time, anyway. I never thought about it much, but I guess I really loved it. 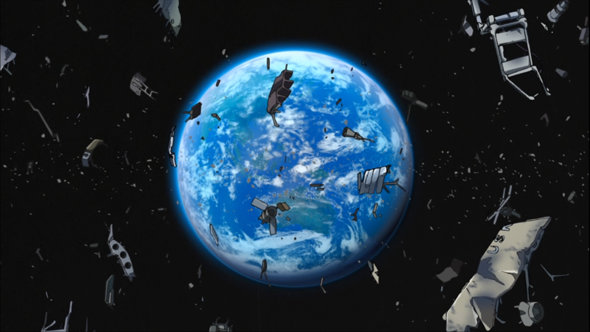 Nono, a character born on the moon without the concept of nationality or the natural outdoors experience presents Hachimaki and Tanabe (and thus the audience) a perspective on the intentions and results of the militant Space Defense Front. As various factions bring earth-based conflicts to orbit, debris is created that represents the intentions and emotional fallout of their actions. In “A Modest Request,” a missile is launched that threatens to trigger a debris overflow event that would force humanity from orbit. More importantly however, the it is a direct threat to Fee’s (debris section’s resident smoker) ability to indulge her addiction. In dealing with the missile, she is forced to re-enter Earth’s atmosphere, where she is finally able to light up in an odd echo of Gravity‘s denouement.

Gravity and Planetes share a profound reverence for the “golden age” of space exploration, striking a chord that is as likely to find an appreciative audience today (with the ending of the manned NASA space program) as at any period in the last twenty years. Gravity features many lovingly recreated interfaces and consoles and revels in the beauty and complexity of human achievement, but it is in the character feeling or pursuit of the scattered pieces of debris that we find their true story.

Marc Ziani de Ferranti (@mezdef) is a Sydney based designer and web developer who was raised on anime, and continues to omnivorously consume all this weird and wonderful.

3 Comments on “Space Debris in Gravity and Planetes”