This week’s True Detective finale was subtle, its relationship with the show was not obvious, and it will take me a few weeks and probably a rewatch to flesh out my take on out what our heroes truly found in the crazyman catacombs (including, but not limited to, nonlethal chest hatchets).

But one scene was awesome enough, iconic enough, compelling enough in its elegance and culturally resonant enough that it demanded immediate overthinking.

I am talking, of course, about the surprise comedy relief sniper attack on Sheriff Steve Geraci’s Maserati (not the worst indie album name), which I think we can all agree was one of the best scenes in the episode.

Through the Cross Hairs

To recap: Rust and Marty have discovered their old work not-buddy Steve Geraci helped cover up the murder of Marie Fontenot by signing his name to a falsified police report. So, they decide to pull a Jack Bauer and torture him into confessing, or at least scare him a lot and make him watch a video tape of a rape and murder it turns out he didn’t have all that much to do with so that he screams a lot and cooperates.

In the finale, Steve confesses: when he found out his superiors were covering up a girl’s disappearance, he, well, he didn’t do much. He let it happen. Chain of command and all that. The fiend!!

Maybe he’s lying and it was in on the conspiracy, but it seems that, in an ironic reversal from his role on Orange is the New Black, Michael Harney’s character is not a secret abusive villain, but is instead a paper-pushing coward. 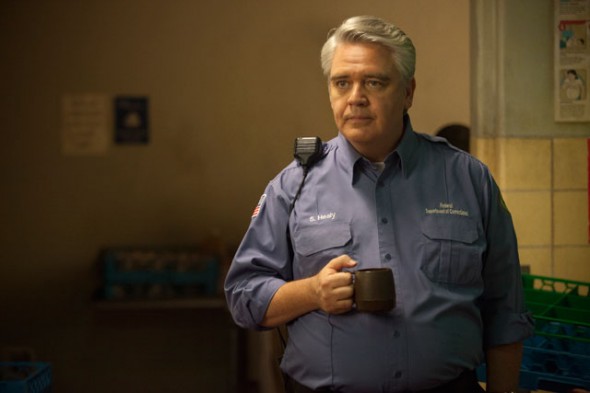 Rust tells Steve a bunch of stuff that, as far as we know, is a bit of a bluff meant to scare him — that they intend to tell the police that they found the tape at his residence, and that they have documents ready to send off to all the big media outlets if anything should happen to them (we see them set these up later; they didn’t appear to be set up at the time).

And, gloriously, Rust tells Steve he has already paid “an old sniper pal” for a contract on Steve’s life, should he decide to turn against our crusading A-list protagonists. This seems profoundly unlikely, as neither Rust nor Marty has much money. But then, we see bullets blasting away at Steve’s fancy car, and Steve is scrambling in the riverside mud like so much crawfish. 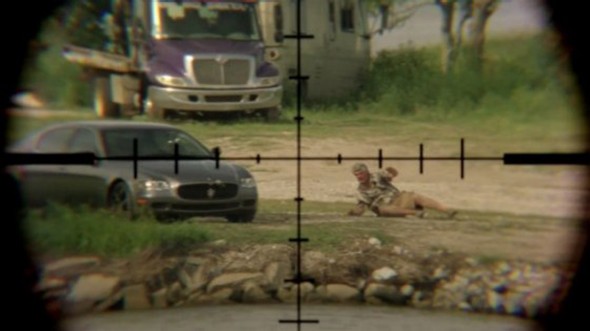 It’s revealed to the audience that the “sniper” is Robert Doumain, the father of a lost boy, the owner of a super-cool hipster dive bar the hipsters haven’t discovered yet, and Rust’s ally at this point. He appears to be somewhat of a competent sniper, but it seems unlikely Rust has paid him for a perpetual contract on Steve’s life (it seems more likely he is just helping). So the sniper story is a lie, even if Robert does have a sniper rifle and seems willing to shoot Steve. 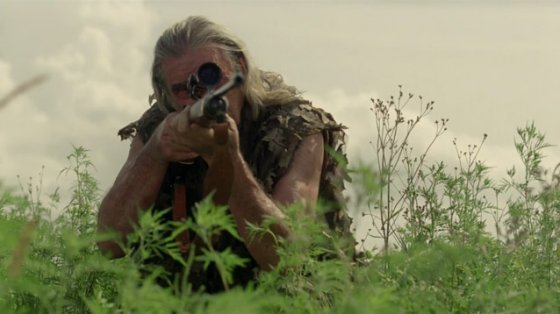 The Best Hitmen West of the Mississippi

If this rang as big a bell for you as it did for me, that’s because a nearly identical device shows up in last year’s series finale of Breaking Bad! 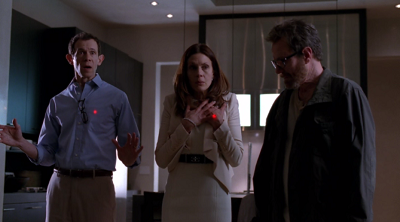 It’s bizarre how similar the device is:

The main difference is Robert actually shoots at Steve’s car, whereas Badger and Skinny Pete play their sniper roles using only laser pointers. 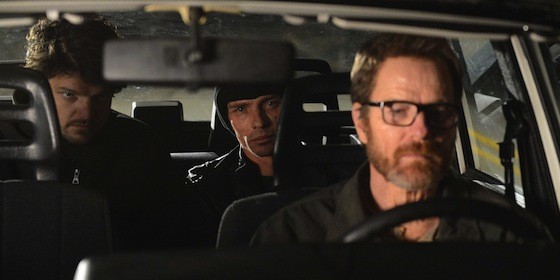 All that’s missing is pointy ears and blueberry pie.

Did Nic Pizzolatto just copy the Breaking Bad scene? It seems unlikely the episode was written after September 2013, when “Felina,” the Breaking Bad episode, aired. But it also seems unlikely they just came up with these ideas independently. Of course, True Detective isn’t in the business of providing satisfying answers to our conspiracy theories.

Look, I don’t claim to have a comprehensive knowledge of fake perpetual snipers. Has this happened in other series? If you have other examples, please add them in the comments and we’ll discuss.

What Do You Get When You Get a Perpetual Sniper?

I’m interested in what this device accomplishes, both for the characters in the story, and for the story structure.

In each case, it ties up existing plot complications and potential weaknesses so the main character can get that final showdown with the bad guy.

It lightens the mood a bit so that things can start from a light place in their journey toward getting really super dark.

It’s also a little nudge up from “all is lost” — each protagonist who pulls this stunt is at a bedraggled and indigent point, seemingly out of non-suicidal options, and the sniper stunt lets everyone smile to see the protagonist is clever and powerful and still has friends. It keeps the descent/revenge/redemption arc from getting too flat.

Plus, it foreshadows a climactic gunfight, at a point in the story when it’s not exactly clear that sort of thing is going to happen. It’s a trope out of Westerns, as Breaking Bad identifies right out, with its “best hit men west of the Mississippi” line — both in that justice is going to be administered by an armed loner, and in that “the cavalry” is out there supporting what our hero is doing, and will arrive if the need arises.

But I’m especially interested in what the perpetual fake sniper does for the audience. Because it’s notable and strange how comforting it is in each instance both when we see visual evidence that the hero’s absurd claim to have contracted a sniper forever is backed up, and the reveal that the backup is a friend from earlier on.

See, the sniper will keep watching this character forever, but we won’t. Because the show is almost over. Our scope on this world will soon go dark.

In this and in other ways, the fake sniper serves as a surrogate for the audience — somebody to whom we can hand off our responsibility. I think we as an audience worry about what will happen to these characters if we are not around to watch them anymore.

This speaks to the implied trajectory of a story — that because we are watching, we know the story will progress, and part of why we watch is to have our expectations confirmed. Of course there are few things that frustrate our expectations for a story more than being prevented from watching it — the perpetual sniper is a way of assuring the audience that our expectations for what will happen will keep being confirmed long after the show is over.

And the absurdity of the perpetual sniper — as if this character will truly live in fear of being shot by someone they never see forever — is softened by the fact that we don’t have to watch it. If we had to watch it, we would expect it to change. But since we are not watching it, we can be content that it will stay more or less how we want it to stay.

And the scenes are funny! They resolve looming anxiety of abandoning the show in a way that is just plausible enough to tolerate, while also meta-winking through a hole in the fourth wall that the show is ending.

The Yellow King of Serialized Television

And since time is a flat circle, we might as well talk about what happens when this eye, once closed, is opened up again.

See, 24, one of my favorite shows to talk about, which is shockingly relevant once more with its return in just a couple months (!!!) ended in 2010 playing with a lot of the same ideas as True Detective’s and Breaking Bad’s perpetual sniper gags — except on 24, the perpetual sniper always watching out for you is real, and it’s a tool of the U.S. government.

24 ends with a meta-shot where Chloe O’Brien, watching Jack through a drone camera on a giant screen, tearfully orders that the screen be turned off. With no one watching, Jack is descending into a very sad sort of danger; he doesn’t do well when we don’t watch him. An unwatched Jack tends to get addicted to heroin or get tortured in Chinese prisons.

It seems unlikely that a second season of True Detective, with its all-new cast, will revisit mustachioed Steve to see if he is still protecting Rust and Marty out of fear of their sniper contract. It also seems unlikely that Better Call Saul, the Breaking Bad spinoff, will address Badger and Skinny Pete getting new laser pointers so they can occasionally scare the crap out of the Grey Matter brain trust.

But I’m curious to see what happens when the cross hairs recenter on 24, and to what degree the familiar feel of the show is restored by the protective act of watching it.

3 Comments on “On Perpetual Snipers, Series Finales and the Protective Act of Watching”