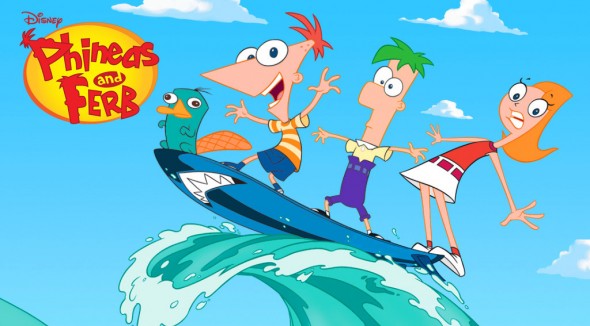 Phineas and Ferb is a cartoon show on The Disney Channel which tells the story of the titular stepbrothers and their never-ending quest to enjoy thoroughly their summer vacation. They spend their time constructing wacky, intricate machines and contraptions, all in the name of fun. Unbeknownst to the pair, their pet platypus, Perry, is a secret agent (codenamed “Agent P”), whose daily duels with the evil Dr. Heinz Doofenshmirtz are the subject of each episode’s B plot, often intersecting with the adventures of the boys and their friends in unexpected ways. Perhaps more unexpected are the parallels between the exploits of Doofenshmirtz and Agent P and those of Gilgamesh and Enkidu in the ancient Babylonian Epic of Gilgamesh. Indeed, Doofenshmirtz and Agent P retell that legendary bromance in their own story. If we accept classics scholar Gerald K. Gresseth’s conclusion that Gilgamesh is fundamentally a humanist work, then we can see how this retelling reflects and supports the humanist ethic of Phineas and Ferb.

Both The Epic of Gilgamesh and Agent P’s stories begin with tyrants. In the ancient poem, Gilgamesh is the despotic ruler of the Mesopotamian city of Uruk, who spends his days abusing his subjects and arrogantly strutting the ramparts of the city. In the cartoon this role is taken by self-described “evil scientist” Heinz Doofenshmirtz, who spends every day (and his wife’s alimony) constructing elaborate evil devices, called “-inators,” and scheming to take over the Tri-State Area.

The citizens of Uruk, smarting under Gilgamesh’s oppression, cry to the gods for aid. The gods create Enkidu, a counterpart to Gilgamesh, who will be able to tame him. Enkidu lives the beginning of his life as a wild man among wild creatures, little more than an animal himself. He is not turned into a human until his encounter with the priestess Shamhat, who makes a man of him, both sexually and by introducing him to bread and clothing. Hearing about Gilgamesh’s crimes, Enkidu resolves to go to Uruk to stop him. The creators of Phineas and Ferb have gone more literal, making Doof’s nemesis an actual animal. Perry begins each episode as an unassuming platypus, the pet of Phineas and Ferb.  Like Enkidu, Perry the Platypus transforms from an animal to a person, if not a human, with the addition of clothing (though without any sexual encounters that we know of). Specifically, with the application of a fedora he ceases to be a wall-eyed pet who “doesn’t do much” and becomes the “semi-aquatic, egg-laying mammal of action,” Agent P. Agent P is the creation of OWCA (the Organization Without a Cool Acronym), a secret intelligence bureau which monitors Doofenshmirtz’s evil activities and sends Agent P to foil them.

With such set-ups, one might expect these pairs of opposites to be enemies. Indeed, Gilgamesh and Enkidu fight upon their first meeting, and Doofenshmirtz and Perry routinely come to blows over Doofenshmirtz’s latest evil scheme. But in the end, the relationship is one of deep friendship, because just as Enkidu was made for Gilgamesh, Agent P was made for Doof. Gilgamesh has dreams that a friend, an equal, is coming to him, and that he will love him “like a wife.” Doofenshmirtz expresses his feelings as all characters on Phineas and Ferb will, eventually – through song. In the episode “It’s About Time” he sings:

I used to sit alone doing evil all day.
But now I think that someone’s gonna get in my way, yeah!
There’s someone in my life who doesn’t want me to exist.
Now I feel fine, ’cause I’ve got a nemesis!

The “nemesis” relationship here is special, exclusive, and not without affection by both parties. In “The Chronicles of Meap”, Doofenshmirtz even describes Perry the Platypus as his best friend. Just as Gilgamesh and Enkidu have grand adventures together, such as killing the giant Humbaba or defeating the goddess Ishtar, Doofenshmirtz and Perry have joined forces on occasion, to defeat the supervillain The Regurgitator in “Where’s Perry?” or to design a birthday party for Doofenshmirtz’s daughter, Vanessa in “Dude, We’re Getting the Band Back Together.” The relationship of Gilgamesh and Enkidu is very much a bromance, a theme seen repeatedly in Phineas and Ferb in, for example, the titular characters and their friends Buford and Baljeet. 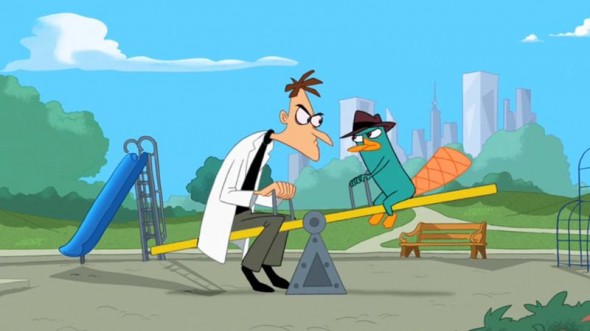 But this friendship is not free of tragedy. Just as Enkidu eventually succumbs to the vengeance of the gods, in “It’s About Time” Doofenshmirtz dumps Agent P, taking up with a new nemesis, Agent Peter the Panda. Gilgamesh is nearly destroyed by his loss, driven by grief to seek the undying Utnapishtim and the secret to immortality. Doofenshmirtz soon realizes how much Perry meant to him and regrets his actions, running in tears from Peter. Perry himself never speaks, but the exegetic music portrays the depth of his heartbreak:

You were my only nemesis
I’d foil your plans, but still I miss
The moments when we didn’t get along
So search your heart, please, Dr. D.
And I am sure that you will see
That you were always meant to be
My only life-long enemy

At the end of the episode, they repair their relationship and go back to hurting each other only “with cartoonish physical violence.” Thus these two have the happy ending Gilgamesh and Enkidu do not.

Further supporting the idea that Doofenshmirtz and Agent P are new incarnations of Gilgamesh and Enkidu is how their story contains the same humanist ideas as the original epic. In his article “The Gilgamesh Epic and Homer,” Gerald K. Gresseth argues convincingly that the Babylonian version of Gilgamesh in which Gilgamesh and Enkidu are best friends (rather than servant and master, as in the earlier Sumerian versions) was crafted by its author to support a decidedly humanist point of view.

[The author] wanted to say simply that Gilgamesh and a fortiori all other men are only – and should only strive to be – human beings. … It was the first statement, at least in germinal form, of the idea of humanism, a belief we ordinarily associate with the rise of Greek culture.

For this reason, that Babylonian author removed, dialed down, or simply had his characters fight against, the supernatural elements of the story. Instead of being semi-divine heroes, they were simply human beings, behaving and reacting as humans do, and ultimately seeking only human kinds of happiness and fulfillment. Gilgamesh does not become immortal, but he returns to his city and makes his immortal name as a just king.

This humanism is perhaps hard to see in the story of Doofenshmirtz and Perry, but if we widen our gaze to Phineas and Ferb as a whole, it becomes inescapable. Now, I would argue that many children’s cartoon shows, ones that are not about the supernatural, are humanist. In general, shows for children often strive to be inoffensive. From that desire springs an attempt to teach moral behavior, while at the same time an avoidance of anything religious. A humanist subtext would seem to be inevitable and is sometimes quite marked. I refer the reader to an excellent piece by Chris Sims, in which he explores the secular humanist underpinnings of Scooby-Doo. So what makes Phineas and Ferb so specifically humanist? The International Humanist and Ethical Union defines humanism as “a democratic and ethical life stance, which affirms that human beings have the right and responsibility to give meaning and shape to their own lives. It stands for the building of a more humane society through an ethic based on human and other natural values in the spirit of reason and free inquiry through human capabilities.”

This is basically the definition of Phineas and Ferb. “104 days of summer vacation,” says the theme song, and the greatest challenge is “finding a good way to spend it.”

Phineas and Ferb spend each day building crazy inventions and having adventures. One example is turning their tree houses into giant robots, and inviting their sister to engage in a massive rock-’em sock-’em game with them. Though their creations are, of course, fantastic, we are never meant to think that there is anything more at work than their own creative spirit, imaginations, and Ferb’s extraordinary expertise with tools. Phineas and Ferb strive to make each day better than the one before, embracing the “right and responsibility” described in the humanist definition above.

So naturally in this universe, Doofenshmirtz must be the villain. His actions mirror those of Phineas and Ferb in that he creates fantastic inventions, but he doesn’t use them for fun, or even to share with anyone else. His -inators could benefit humanity tremendously, if Doofenshmirtz chose to put his creativity and his wife’s alimony toward a noble cause. But instead, he is consumed with petty grudges against his brother, his parents, and others who populate his “emotionally-scarring backstories.” His desire to take over the Tri-State area springs from those grudges, and his will to dominate is pretty much the opposite of a “democratic and ethical life stance.” Like Gilgamesh, Doofenshmirtz is trying to be, if not a god, above his fellow humans. Both must be stopped.

Phineas and Ferb is a cartoon with a strong humanist message, and that message is reinforced by using Doofenshmirtz and Agent P as a modern Gilgamesh and Enkidu. Doofenshmirtz’s failures are necessary, because they do not spring from a desire to make the best of and for human beings, which is the proper use for human industry and creativity. Even though it’s also very human to sympathize with Doofenshmirtz’s motives and desires, the world would be a better place if we were all more like Phineas and Ferb. So in the words of the extended theme song, “Let’s make sure that in every single possible way / Today’s gonna be a great day!” 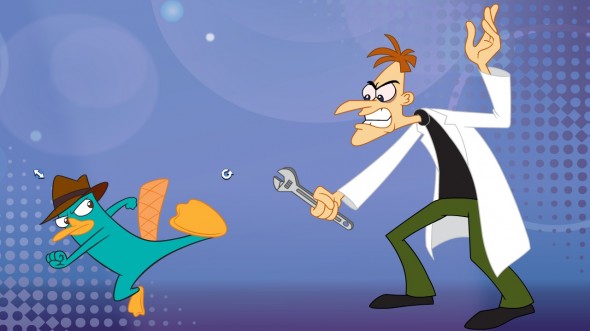 Jessica Lévai is a professor of myth and folklore who continues to mine her courses for article ideas. She’ll be the first to admit that she doesn’t really like The Epic of Gilgamesh, but loves Phineas and Ferb.

One Comment on “Doofenshmirtz as Gilgamesh: Mythic Bromance and the Humanist Ethic of “Phineas and Ferb””