Please enjoy this guest article by Andrew Buonopane! Spoilers for the first episode of Agents of S.H.I.E.L.D.

Disney’s ABC’s Marvel’s Agents of S.H.I.E.L.D. premiered Tuesday to adequate ratings, and is off to the commercially promising start its creators intended. It is difficult to deny the show’s primary purpose (to make enough money to fund Joss Whedon’s production of the complete works of Shakespeare twice over), and other sites have already likened the first episode to a police procedural with Marvel badges. However, in a recent EW interview, Whedon indicated that it’s “basically a TV series of ‘The Zeppo’ [an episode of Buffy the Vampire Slayer], which was a very deliberate deconstruction of a Buffy episode in order to star the person who mattered the least. The people who are ignored are the people I’ve been writing as my heroes from day one.” Following on this, there is much to indicate that it will be more than just a money-grab. 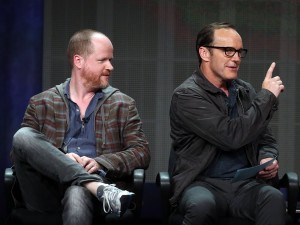 Though it will also be that.

Though we’ll definitely have to wait to get a statistically significant sample, in its first episode the show has evidenced a meta-textual commentary on the relationship between works of its predecessors’ ilk and the audience. The pilot is a reflection on the impact that superhero movies—and action-adventure movies in general—can have on the pop-culture consumer.

There are at least two good reasons for ABC’s new series to do this independent of meta-textual concerns: commercial association with the Marvel property and narrative legitimacy. The explicit references to each Avenger except Hawkeye remind people that they ought to keep tuning in for more of what they saw in theaters. Furthermore, the incorporation of plot elements from Marvel movies up to and including Iron Man 3 justify that commercial association by demonstrating the relevance of this new story to the established canon. 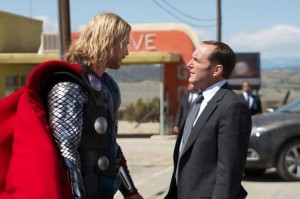 That’s a nice cape. Can I tell people I know you?

However, there is also an ongoing discourse within the episode about what happens when audiences of the standard action movie really get the point of the power narrative.  The heroes aren’t just talked about as commercial buzzwords or plot factors; They’re treated like the pop culture heroes they are in our world.  They have in-universe action figures, people dress up as them (as in the closing montage of Avengers), and they are referenced (or reverenced) right alongside other pop culture figures that are fictional within the diagetic world of this cross-platform Marvel continuity.

What happens in the show is like what would happen if we talked about Seal Team Six alongside the Magnificent Seven, or started selling un-ironic action figures of Sully Sullenberger.  It’s not quite direct enough to break the fourth wall, but the kind of signification at play is more than an allegory. It not just that superheroes are real and living among us, it’s that within the fictional world people’s reactions to them are indistinguishable from our reactions as audience members. But for them, it’s “real,” so the interactions are more immediate, whereas for us, the effects of these stories take time to sink in. 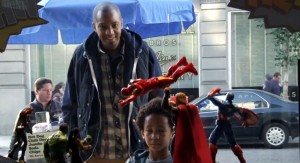 We see this immediate interaction chiefly through the two characters that are proxies for the audience: Skye and Mike Peterson. At first glance, Skye is just an outsider who is brought into the team to serve as a love interest for Grant Ward, the stock action hero who appears to be the main protagonist in the first half of the episode.  But she turns out to be resourceful and nerdy, displaying hacker skills and admitting to partaking in cosplay at Stark Tower. The most interesting development is the narrative prominence she gains during the interrogation scene.  Just as Phil Coulson and Ward are about to administer the best truth serum ever, Phil inverts the dynamic of subject and object, injecting Ward with the serum.  Phil submits his ace action hero to her scrutinizing gaze to gain her trust and motivate her to join the Agents of SHIELD.

At this point in the episode, the focus shifts decisively away from Ward and toward Skye, with Ward now serving as her “love interest”. While in many shows, the audience identifies directly with the action hero, the second half of the pilot indicates that we are to identify with the character who is at some level a fan of the franchise, just as we are, as well as a knowledgable pop culture geek, just as we are—in addition to the aforementioned cosplaying, she makes numerous Whedonesque pop culture references, from the in-universe Avengers to Terminator and back again. Her developing relationship with Ward seems to be laying the groundwork for a dynamic which will explore the process of fandom: how fans are attracted to action heroes and desire to associate with them. 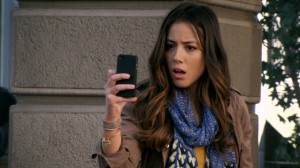 Mike, a hard-working American man who shares an interest in comic book heroes with his son, displays great awareness of common themes in the superhero genre and in American culture generally: good guys and bad guys, origin stories, etc. He is an American consumer who has absorbed some of the broader messages of modern storytelling. He has fallen on hard times in recession-era America, but tries to follow in the footsteps of his heroes: he gains superpowers to protect what he cares about.

His downward spiral gives the lie to his cherished American notion that as long as you are a good person, believe in yourself, and work hard, you’ll be successful.  He becomes the villain he always rooted against, but in his mind he hasn’t done anything wrong: he only did what the world around him has extolled.  This reaches a morally ambiguous resolution in the episode’s climax when Mike expresses his grievances to Agent Coulson, who serves as the ambassador between the normal people (the audience) and the heroes. He lays the blame for everything he’s been told on Phil, who’s standing in for the culture as a whole.

Mike has grown skeptical of the beliefs he gained from the culture, due to the actual presence of super-powered beings. He is struggling with how to be faithful to the lessons he learned from heroes when their abilities seem to render the application of those lessons futile. He sets all this out before Phil,who essentially repeats what Mike has always been told. Then Mike is knocked out, ensuring the safety of the innocent bystanders. The Agents of Shield have saved the day… sort of. The agents have saved Mike from himself, but is he better off in the end? Coulson says something about how he’ll turn it around, but it’s left very ambiguous, and his concerns are never really addressed, just restated. 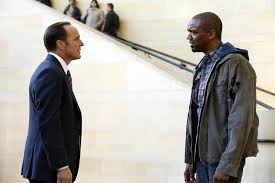 Not an Optimistic Picture.

There are a lot of different directions that this show could go, but I think the basic spirit of the show’s intentions are summed up when Skye and Mike are talking early in the episode. This conversation seems to be the thesis for the show to either prove or refute: Either power ought to be sought for the greater good as superheroes have always done, or else these narratives have left us reality-fettered mortals ill-equipped to emulate our heroes. Or somewhere in between.

In the soon-to-be famous words of Skye, “with great power comes…. a ton of weird crap you are not prepared to deal with.”

Andrew Buonopane majored in Seinfeld references in college and is now making the obvious transition into studying for the Catholic priesthood near Washington, DC . He contributes to the seminarian blog and can be contacted by email.

Did you like Marvel’s Agents of SHIELD? What do you think about the relationship between real-life superheroes and their real-life audience? Sound off in the comments.

13 Comments on “With Great Power Comes… a TV Pilot”