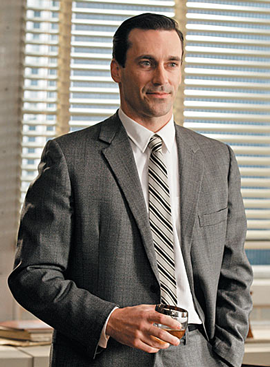 The man in the gray flannel suit.

Perich: Has this season felt slow to anyone else?

Most of the plot points have revolved around the consequences of last season’s actions. Betty coming to terms with her divorce; the SCDP crew adapting to life in a smaller firm; Don shedding the last vestiges of his identity. In terms of actual motion forward, we haven’t seen much. There’s certainly been a lot of character growth – Pete coming into his own, Peggy becoming more sexually confident, Don crying – but not a lot of plot points.

I say this not as a complaint but as a seed for thought. I still contend that Mad Men is the best thing currently on television. But there hasn’t been much plot this season. Could this herald a new trend of intense, well-crafted character dramas with ensemble casts? Or does it mean that you can sell soap opera to anyone, provided the cinematography’s good and the suits are nice?

Belinkie: Actually, I felt the exact opposite way. Last season seemed slow to me. I admired Mad Men and enjoyed it a lot of the time, but it seemed to be treading water. One of the big stories was Don’s flirtation with the mysterious Conrad Hilton… which went precisely nowhere. There was the office politics about Sterling Cooper’s new British overlords, which I just couldn’t get swept up in. The big bombshell was Betty finding out the truth about her husband, and that just seemed very pre-ordained. She felt betrayed and wanted a divorce… no duh.

You mention that the plot points of this season all stem from the actions of last season. I agree – last season was laying the boring groundwork for this season, which I think is the series’ best so far. Seeing Don Draper dealing with single life is great. Seeing the Mad Men struggle to keep their fledgling agency afloat is great. And the flashback episode that showed how Don broke into the ad game was freaking genius. 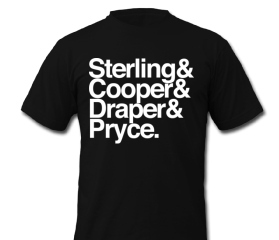 I guess this shirt is going to be valuable now. So long, Burt.

Perich: If the past seasons have been about breaking out of preconceived notions of what your life is supposed to be, S4 has been about defining what’s next. So much of growing up is rebellion: breaking away from the past. But after the dust settles and the battle’s won, we still have to wake up and go to work every day. Do we make a new life for ourselves? Do we fall back into old habits? Who is this new identity that we’re discovering?

With Peggy and Pete, the change seems natural, because they’re very young themselves. They’re in that phase when they should be forging an adult identity. Pete has lost his father (S2) and he still wants to take advantage of the ties that wealth and connection allow him (S3, S4). But he’s defining himself through his work. And not just by having a lucrative job that will provide for his family – note how he turns down that offer from Chaough. He likes being a partner. He takes enough pride in it to call Roger out on being lazy.  He also takes enough pride in it to gloat when Ken shows up. So it’s not all admirable, but it’s character. 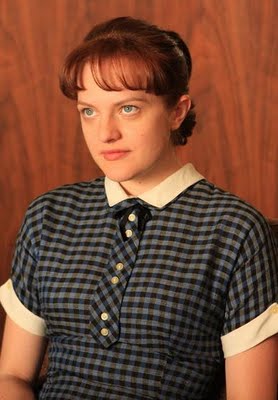 How bad can a birthday be if you wake up next to Don Draper? Okay, he's a little covered in vomit. Still, happy birthday.

Peggy is already defining herself as a “career woman” as S4 kicks off. Now it’s just a question of living with the consequences of that choice. She’s forced to confront that choice directly, and memorably, in “The Suitcase” – choosing between a birthday dinner with her boyfriend and staying in the office. She also has to choose between a conventional romantic life (courtship, engagement, marriage, kids) and the bohemian life of 60s Greenwich Village hipsters.  The process of discovery has been rocky for her, but she’s stayed true to what she wants throughout.

The change has been dramatic for Don because Don is, notionally, an adult. And yet he never really had a childhood, not a pleasant one anyway, and what little he had he wants to repress. Free of Betty and his children, he has the opportunity to date around. Women present themselves to him: his secretary Allison, his fetching neighbor, the actress Bethany van Nuys, Dr. Faye, his new secretary Megan. It’s an adolescent fantasy: rich, single, living on your own in the big city. And yet we see how hollow it is. The dingy apartment, the drunken one-night stands, the lost contact with his children.

Don gets a clean break with his past when Anna dies.  With her gone, he’s free to be whoever he says he is. And, as the final episode showed us, Don is happy being the man he was before. Don Draper is the type of man (as predicted by Dr. Faye) who marries his secretary. Or the model on his photoshoot. And yet he hasn’t remained completely inert. He’s drinking less. He respects Peggy and Pete more.  He’s growing a little more wary of Roger – the man’s a friend, but he’s also a mirror that shows the future. And he’s come to terms (for now) with Betty.

Belinkie: I kind of worry that Mad Men bobbled the dismount after a stellar season.

But on the other hand, this episode was definitely a shocker. I won’t speak for everyone on the internet, but I certainly didn’t see Don’s engagement coming (and certainly not to THAT girl). So any worries about the direction Mad Men is going are probably unfounded; Mad Men never goes where you expect it to. 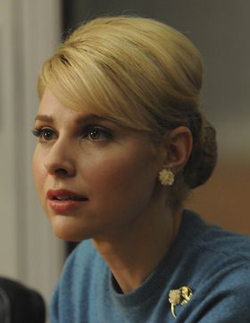 ... but as a lovely parting gift, you get two tickets to the Golden Globes!

Perich: Okay, to take your points in order… 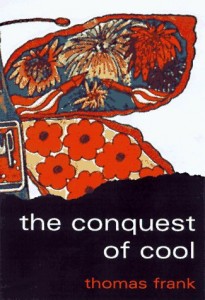 Belinkie: Okay, lots of conversations going on at once. Let’s talk about the ad business first. Don’s letter in the penultimate episode reminded me of a book I read in college, The Conquest of Cool. The author, Thomas Frank, talks a lot about how the advertising business managed to appropriate a lot of the counterculture to sell sneakers and blue jeans. Think about the famous “I’d Live to Buy the World A Coke” ad, from 1971. A group of multiracial young people frolic on a hillside while singing (and I swear these are the real lyrics):

This is two years after Woodstock. Madison Avenue works fast. You can see the connection to Draper’s letter. He’s taking the language of youth and rebellion, and making it a business strategy. He’s PRETENDING to be something heartfelt and genuine, when he’s really cynical and calculating. He’s ahead of his time.

But the finale gives no indication that his “Conquest of Cool” strategy is going to work. The account Peggy lands doesn’t want a way to appeal to her bohemian friends – the ideas she pitches to the pantyhose company seem cutesy and quaint. You asked if I wanted a white knight to save SCDP with a giant account. No, I wouldn’t say that. What I did want was some indication that Don’s letter hit a nerve and pointed them in a new direction. I wanted one small new account, but the kind of account that the old SCDP would never have landed. I wanted a sense that the advertising game was starting to change. I’m sure it’ll come next season, but that was absent from the finale.

Perich: Is there really a youth culture yet? Do the youth know enough to know they’re a market force? I get the vague impression that, in 1965, there were a lot of parties in Greenwich Village lofts and angry nerds writing manifestos for the Voice and their local equivalent. But we’re just witnessing the beginnings of a movement. Don comments on the “Berklee thing” when he hangs out with Anna’s young friend in California (Episode 3). I think we have to wait until the U.S.’s Vietnam presence escalates for this to become more prominent.

The biggest signs we saw of the ad game changing were Bert Cooper retiring in a huff (“You there! Get my shoes!”) and Roger Sterling being shuffled quietly to the side. Out with the old, in (eventually) with the new. 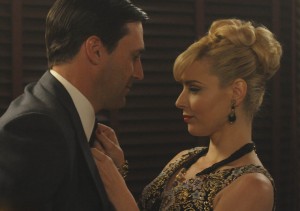 8 Comments on “Mad Men Season 4: In Which There Is No Fresh Start”