As the technology behind video games becomes more and more powerful, it becomes possible to create worlds that mimic reality, with the freedom to make ethical choices and experience the consequences of those decisions. Although the plots, settings and characters are written and designed by teams of artists, any and all aspects of games might be altered to show the effects of the player’s actions. In Bioshock Infinite, however, these kinds of choices exist only to illustrate that the player is merely offered the illusion of freedom.

You play as Booker DeWitt, a private investigator with a sordid past. You’re (supposedly) tasked with rescuing a young woman, Elizabeth, from the flying city of Columbia, which is entered through a lighthouse off the coast of Maine. Elizabeth has been held prisoner for her entire life by her father, Zachary Comstock. Along with Comstock’s Disney-villain-esque evil of keeping his daughter captive, he’s also a white supremacist who has used the city of Columbia for such charming acts as slaughtering Chinese dissidents during the Boxer rebellion.

(As an aside, you’ll probably notice I sometimes call Bioshock’s protagonist Booker, and sometimes ‘you’. This is intentional. One of the greatest advantages of video games as a story-telling medium is the strong identification between the player and the character they control. This forces the player to not just sympathise for the protagonist, but also to feel some responsibility for their actions.)

Soon after meeting Elizabeth, you learn she has the power to tear holes through time and space. At first this is only used to grab supplies and manipulate the environment to your advantage, but as the plot progresses, you begin to go through these tears into parallel universes.

These parallel universes are the result of different paths being taken. Think of it this way: if you flip a coin, it could come up heads or tails. In the world of Bioshock Infinite, it’s not that the coin lands on heads approximately 50% of the time and tails the rest of the time, but rather that the universe branches, creating one reality where heads comes up, and one where tails does. Flip the same coin one hundred times, and eventually there will be countless (OK, technically 2100) nearly identical universes, the only difference being the outcomes of the coin flips. In one of these realities, heads will have come up all 100 times, as demonstrated by two characters in Bioshock, the Lutece twins, early in the game.

I hope you’re following so far, because this is where it gets confusing.

At the very end of the game Elizabeth gains the power to see not just her universe, but all universes as they really are. She takes Booker on a trip through several, showing you an ocean full of lighthouses, all exactly the same as the one from the start of the game, all complete with their own versions of Elizabeth and Booker going through the same drama. The unfortunate upshot of these infinite realities is that, despite Comstock’s death at Booker’s hands in one reality, he still exists to continue his reign of oppression in infinite others. Elizabeth’s take on all this? “It will only be over when [Comstock] never even lived in the first place.” 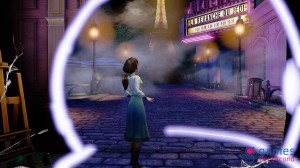 Booker immediately agrees, and Elizabeth takes him to a scene that was shown earlier in the game: a river where Booker was once nearly baptised to atone for his past, only to reject the ceremony, not believing that “a dunk in the river’s gonna change the things [he’s] done.” It is here where we realise Booker’s two potential futures branching from the moment in which he chose whether or not to get baptised. In one, he accepts that forgiveness for any act comes easily, so long as he asks, and becomes Zachary Comstock. In the other, he decides that atonement requires a greater sacrifice, and later sells his infant daughter (who grows up to become Elizabeth) to Comstock. To prevent the events of the game before they’ve even begun, Booker submits to drowning at the hands of several alternate versions of Elizabeth, all but one of which blink out of existence afterwards, before the screen fades to black.

Throughout the game, Booker and Elizabeth talk about choice and how to make up for the consequences of their actions. By the end, however, their dialogue reveals that there are no decisions, only what they will or will not do. Booker tells Elizabeth that “No one tells [him] where to go” – a fascinating choice of words for the main character of a video game whose sole function is to be told where to go by the player. A few minutes later, as Booker stands next to his daughter’s crib, telling Elizabeth there’s no way he’d give her away, she replies “You don’t leave this room until you do. You can wait as long as you want.” On the surface it’s a statement about what Booker will do at the behest of Comstock, but in truth it’s about what the player will do at the behest of the game’s writers.

All gamers are familiar with some version of this scenario. Some aspect of the game, maybe some text on the screen, a disembodied voice, or a character, tells you what you have to do next. You’re not given any alternatives. It doesn’t matter whether you think it’s the right thing to do, or if you want the inevitable results of your actions to come to pass. It’s not a new observation, but Bioshock Infinite explicitly points it out. In the context of video games, if the player is told they can’t progress unless they kill the man in front of them, then it doesn’t matter how long they stand there. The only option is to do what the game designers say, or don’t play at all.

In fact, it goes even deeper than that. It’s true that the world of Bioshock Infinite would not exist if it weren’t for a long list of writers, artists and programmers, but all of that would be meaningless without a machine to render it and a player to explore it. The act of loading Bioshock on the gamer’s PC or console creates Columbia and everything within it. When Elizabeth shows you the ocean full of lighthouses and the infinite iterations of herself and Booker, she is telling you that every person playing the game has initialized their own version of Bioshock Infinite’s universe and colored it with their own decisions. 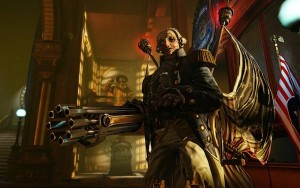 Many modern games offer players moral choices with some small impact on the course of the plot, usually in the form of two endings, one good and one bad. Bioshock Infinite, however, posits that these choices don’t matter. The very fact that both paths exist means they must, in fact, already have been taken. By starting the game, the player has created a world which can only be filled with violence, as this is the path that the game designers have written for the player to follow. The only choice Bioshock offers is to play or not to play, giving potential players the opportunity to end the events of Bioshock’s plot before they even start. Similarly, after Booker is drowned in the game’s final moments, the fade to black does not indicate the end of the game, but the obliteration of Bioshock’s universe before it was even created.

This can be extended to the real world. It may seem far-fetched to apply the philosophy of a game that involves battles with animatronic George Washingtons, but one interpretation of quantum mechanics, the many-worlds interpretation, assumes the universe functions like Bioshock’s, branching at any point that can have more than one outcome, effectively exploring all possible outcomes. The fact that a universe which contains violence is within the realm of physical possibility means it must happen. Since all living, thinking beings have the potential to make choices that would result in the pain and suffering of others, there must be at least one reality where they have. It is impossible to distinguish between a course of action that exists, and a course of action that has been taken, since the former necessitates the latter. The only way to truly ensure a particular path does not end in suffering is to prevent it from starting. According to Bioshock Infinite, the only truly ethical existence is non-existence.

Early in Bioshock Infinite, Booker does accept a baptism. He has to; it’s his only means of entering Columbia. When he’s held under water long enough to pass out, he comments that the “priest needs to learn the difference between baptising a man and drowning him.” In the ethical framework of Bioshock, however, drowning is the only effective baptism. 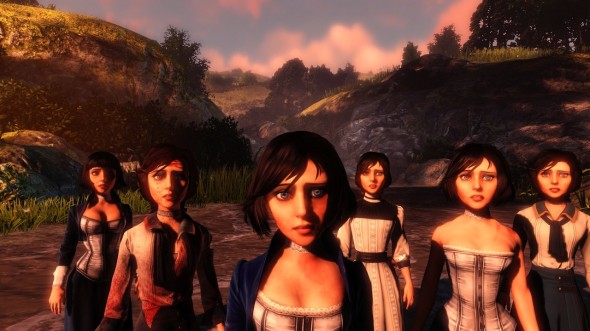 C. Lenz has a bad habit of playing video games until her eyes bleed. Between bouts of writing (both fiction and non-), she is attempting to explain the mysteries of high substitution rates in the vicinity of low-complexity protein-coding DNA.

15 Comments on “To Play or Not to Play: The Ethical Implications of Bioshock Infinite”