Were fairytales always about losing your virginity? Well, yes, I suppose they were. But was it always as blatant as in the second most expensive film of all time, Tangled? And more importantly, does a girl’s journey of self-discovery have to center around losing her virginity?

Well, since Tangled is all about the new, empowered female twist, it needs to address issues of sexuality in a feel-good, comfortable sort of way. We get to feel empowered without actually dealing with the complexity of the actual issues that stand in the way of feminists today. It’s entertaining and it’s comfortable. And Tangled was, above all, comfortable. Even the hair never actually tangles in anything, despite the title of the film! Unfortunately, gender issues are not comfortable, and that is the problematic I would like to address.

As Hans Magnus Enzensberger pointed out already in the 70s, popular media creates something he termed the “consciousness industry”. This consciousness can be summarized as a world view that is reinforced by certain symbols and assumptions. In order to remain dominant, it assimilates, and subsequently neutralizes, all elements that go against the world view it is spreading. This is similar to Don Draper’s “If you don’t like what they are saying about you, change the conversation!” with one major difference. Ignoring an opposing movement is not enough to make it disappear. Hence, the trick that the consciousness industry uses is similar to what populist politicians do – something along the lines of “take the language of the opponent and redefine it in a way that supports your agenda instead”. The logic behind such actions is that, if you fight your opponent directly, this will draw more attention to what they are saying. An open discussion will give the counter-forces a chance to expand their political vocabulary and to come up with more examples and arguments that support their claim. If, on the other hand, you take their main key-words (say female emancipation) and redefine it in a way that supports more accepted beliefs (for example by creating female superheroes, but making sure to sexualize them as much as possible), then you have successfully assimilated your opponent’s arguments and gained some of their voters, or, in the case of the film industry, viewers.

Although what I described so far implies a conscious attempt at undermining an opponent, this sort of assimilation occurs much more often automatically, as an inborn side effect of mass-produced popular culture. And we often let it happen because the resulting stereotypical narratives are familiar and easy to consume. After all, stereotypes aren’t always harmful. Familiar narratives can facilitate communication and create positive role models. But they also work towards maintaining the status quo. 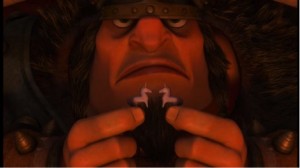 Now, what does this have to do with that sparkly, pimped out fairytale that is Tangled? Well, quite a lot, actually. Tangled, along with many young adult films that have come out recently, has attempted to give us, the gender-sensitive audience, empowered three-dimensional female characters. In fact, Tangled seems to be telling us at every turn that it’s pretty edgy that way, because, look it’s questioning gender roles all over the place! Mostly, it does it by flipping things around. We see a frying pan used as a weapon. Then, we meet a bar full of smelly cut-throats that are armed to the teeth with phallic symbols such as daggers and swords. But soon we discover that the threatening ruffians actually just want to sing and dance and play with unicorn toys like little girls. (Of course, our main male lead has no such crazy fantasies and instead admits that his dream is to have lots of money, which is more manly and hence acceptable for a love-interest.) Towards the end, we have the love-interest narrating how he and Rapunzel got engaged. He jokes that she had to beg him for years before he agreed to be her husband. But just before we can fully let such an unconventional idea sink in, he admits that, no, of course he was the one who proposed. The other way around would just be silly and not romantic at all. Such little details are equally fun and disappointing. Tangled demonstrates an awareness of gender roles and differences, even plays around with the idea of mixing them up, but never dares carry through.

Apart from that, Tangled relies on several typical gender-based tropes in a more non-ironic and non-reflective way. Before I get to the main issue, namely Rapunzel’s character arch, I would like to introduce you to the narcissistic, hypocritical, passive-aggressive, man-hating straw-feminist witch that is Rapunzel’s kidnapper and adoptive mother. She is terrible on all accounts. She uses and manipulates Rapunzel at every turn. She scares the young girl into never leaving the tower because the outside world is full of evil things, mostly evil men. Later, she plants doubt in Rapunzel’s mind about giving Flynn her virginity (ok, it’s some sort of tiara, but come on, we all know what they were really talking about), assuring her that he will leave her as soon as he gets what he wanted. Since the witch is our main villain, Rapunzel’s self-search is defined by her ability to break free from her clutches. And so, Rapunzel’s path towards maturity goes hand in hand with the discovery that men are not all evil after all and that her fear of them was just the result of the witch’s oppression. Don’t get me wrong, I think that’s a great thing to discover, and it’s very important for girls to not view boys as “the other” but instead as fellow human beings, just like themselves. It’s a healthy, positive message. But it’s also Rapunzel’s entire self-search. She doesn’t really learn anything else. 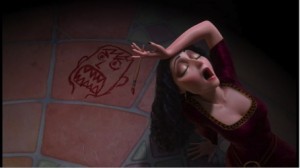 Here is Rapunzel’s life arch: (1) prolonged childhood where she is just an “it”, (2) loss of innocence through a man (not, say, through independent world experience), (3) caretaker. We meet her as a dreamy girl that hangs like a monkey on her freakishly long mane of hair and sings the obligatory “I want something more from my life” Disney princess song. On her way to fulfilling her dream of self-discovery, she finds that she has a new dream, namely Flynn, the thief she has talked into being her guide. From that point on, the fact that she is a long-lost princess takes a back seat to the emerging romance and is hardly ever dealt with. Instead, her ultimate self-discovery ends with her losing her previous magical powers and re-entering society. How? By Flynn violently, and without her consent, chopping off her magic hair! Until then, her long hair had only been a benefit and she never showed any desire to get rid of it. But, the hair symbolizes her wild, innocent, childish side and must be civilized.

During the film, her hair undergoes stages of cultivation, for example by being put in a braid. That is the first time we see the hair be an inconvenience to her instead of a power. By then, she had already started entering society as a normal girl. The next step is to rid her of her innocence and cut off the hair entirely. 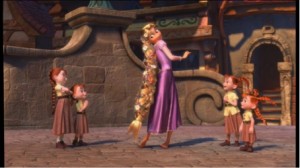 In the beginning of the film, Rapunzel’s crazy long hair has the benefit of getting her out of unpleasant situations. With it, she can protect herself and do fun stuff like hang from ceilings and fly over large bodies of water Tarzan-style. At the end, she is robbed of that freedom in the name of becoming more mature.

Basically, her character arch ends with her losing the one thing that defined her throughout the entire film. Instead of learning how to deal with her unusual background and embracing her own wild side, she has to get rid of it and become normal, join a nuclear family, find a guy who cares about her and settle down. Her magical powers do come back in a different form, but only to underline her new role as a caretaker even more: she gets magical healing tears. Instead of being free and powerful, she must now resign herself to taking care of others, like a good mother and wife.

And this is where an otherwise original tale falls back into an old pattern. Even though Rapunzel is a fun and engaging character, her final goal is still family and the most interesting thing she can discover about the world is men and sex.
The intention of this article is not to dismiss Tangled as a film, but to question it as a contribution to gender equality in the media. It can serve as an example of the way an established narrative can assimilate new trends without changing much at its core. Generally, a film advertising itself as having a strong female protagonist is hardly ever feminist below the surface. Choosing to directly address issues of gender runs the risk of trapping the character in an arch that does not go beyond her being female (no matter how strong she is).

On the surface, the story is about a girl learning not to fear the world, thus escaping the limitation on freedom that come with having to guard her femininity (represented by the tower she is trapped in at the beginning of the film). But the symbols and stereotypes used to convey this message rely on a set of assumptions about women and family that come from the past instead of being forward-thinking. Tangled does address problems that girls face today, but offers going back to the norm of earlier times as a solution. Being a girl is not easy in a time when gender roles are becoming more blurry, when women are taking over more and more male roles, but are still expected to be sexy and feminine. In the beginning of Tangled, Rapunzel is a freak of a girl that lives outside of society. This speaks to the confusion of the modern teenager about identity and finding your own place in the world. At the end of the film, Rapunzel finds her place in a norm, not in herself. She has to change what defines her and rebuke everything she believes in in order to fit into the mold of a typical “girl” as opposed to a human being that happens to be female. While Tangled may seem like a step forward for Disney, the story leads our original, quirky and fun female character back to her “rightful” place as the typical Disney princess. 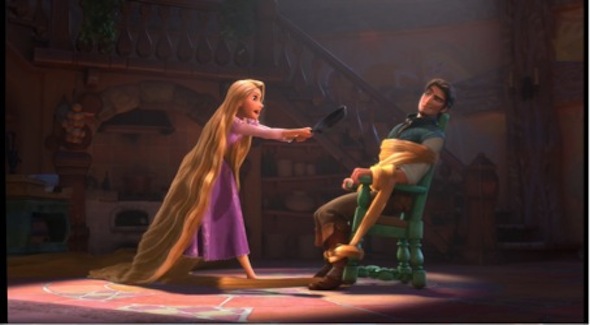 Sofia is a film student living in Austria.

44 Comments on “Untangling the Princess”