It’s that time of the year, folks: that time when we subject the Oscar acceptance speeches to a level of statistical scrutiny they definitely don’t deserve. 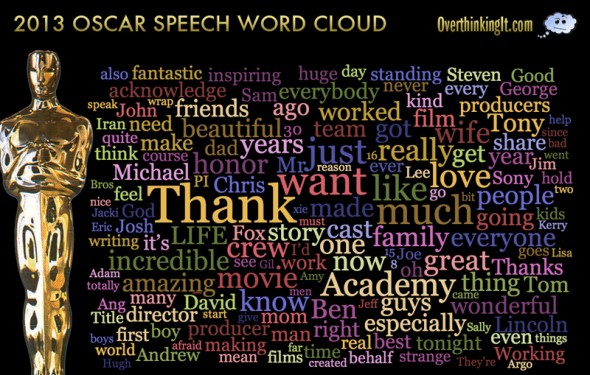 Actually, to be fair, this year’s speeches are deserving of some scrutiny. The winners for visual effects got cut off as they started to address the controversy over the mass layoffs at their studio, Rhythm and Hues. Anne Hathaway dared to dreamed a dream of a world without downtrodden prostitutes forced to sell their hair and teeth. And Ben Affleck gave us an unexpected window into his, um, workman-like marriage with Jennifer Garner.

But I’m not here to read words and discern their collective meaning. How passé. We live in an age of big data and god-quant overlords. Which is why, for the past three years, I’ve fed all of the transcripts of the speeches into a quantitative text analyzer in order to unlock the secrets of our Academy Award winning titans of cinema.

OK. It’s less about unlocking deep secrets and more about producing fun word clouds, charts, and graphs, and drawing spurious conclusions from short-term trends. Which is the whole point of quantitative analysis, right?

First, kudos to whoever decided to use the theme from Jaws to play off award recipients who were going too long with their speeches. The image of a huge shark about to devour a tuxedo-ed man is both highly entertaining and apropos given the ruthlessness of the entertainment business and the suddenness with which that ruthlessness can devour a career.

Anyway, the point of that digression was to remind you that Oscar speeches have some sort of limit placed on them by the show’s producers. Winners can’t drone on incessantly, even if it sometimes feels like they do. But some years, the droning actually does go on longer than others, and/or the speakers manage to talk a bit faster to squeeze in more words.

We can observe this by calculating the words-to-speech ratio for a given Oscar ceremony: 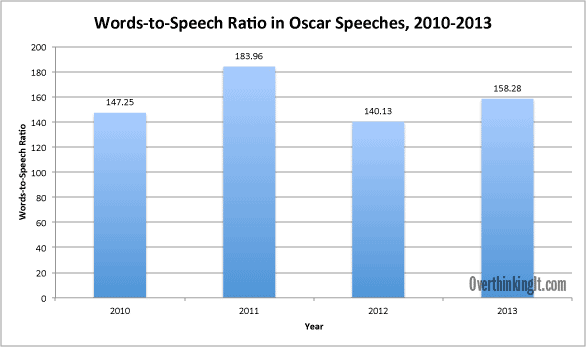 Is there a trend to report here? Not so much, but let’s have some fun and speculate for a moment on factors that might drive this ratio up or down. Is there a trend towards faster or slower speech overall? Are actors rehearsing there speeches more, which should theoretically increases speed and the number of thanks to squeeze into the speech (see below)? Are there more non-native English speakers receiving awards, who speak English more slowly? (Huh. This is actually fairly plausible. File under ideas for future OTI posts…)

And most importantly, what about Scientology’s effect on length and speed of speech delivery? Shouldn’t the removal of thetans facilitate faster, better speech delivery?

Yes, let’s go with that. Take that, Xenu! 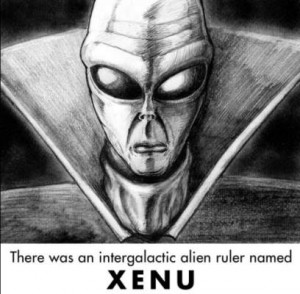 I wonder if there’s an emergency e-meter backstage at the Oscars. 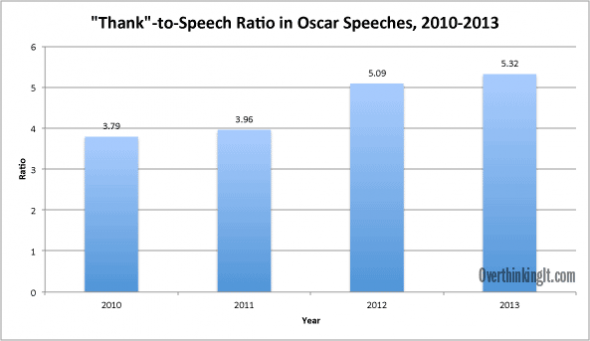 Oscar speeches are increasingly packed with the word “thank.” Are we becoming more grateful as a society? Or perhaps agents are prodding their clients to pack more “thank you”s into their speeches to ingratiate various studio VIPs?

Hey, about those guys. Sadly, visual effects house Rhythm & Hues is suffering severe financial difficulties right now. I urge you all to remember…

[PLAYED OFF BY ORCHESTRA]

Regardless of the changing labor economics of the movie business and its effect on the number of people to thank in an Oscar speech, winners can always thank The Academy of Motion Picture Arts and Sciences, aka AMPAS, aka The Academy, aka Our Holy High Priests of Entertainment. 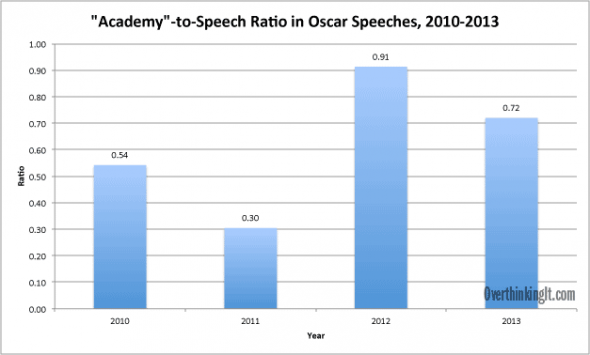 Not so much of a trend here, but let’s think strategically about this for a moment. An Oscar winner has a limited amount of time to thank people in a speech. Thanking The Academy is a nice gesture, but not specific enough to prioritize. Mentioning a specific studio head, like a Weinstein, could be important to the career, and could have negative ramifications if omitted. Mentioning a spouse could be important to domestic tranquility, and could have negative ramifications if omitted. Forgetting to thank the Academy may cross Academy president Hawk Koch, who has an impressive title and an even more impressive name, but it probably won’t land you a role in Tarantino’s next movie, nor will he waiting for you in bed when you get home. 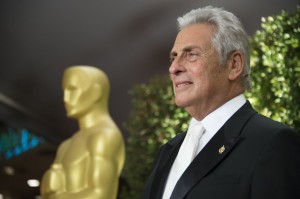 His name is Hawk. Koch.

Or may be he will. This is Hollywood, after all.

ANYWAY, about those spouses:

Mentions of Wives and Husbands 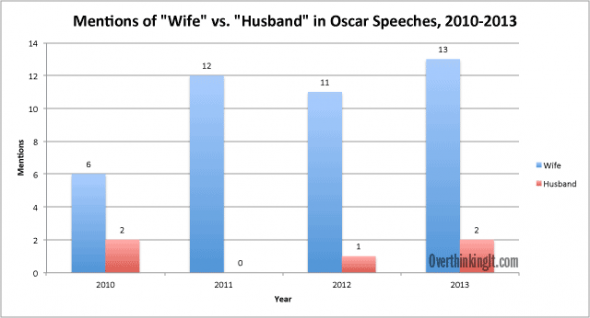 But we’re pretty far from that, given the current lack of widespread gay marriage in the US and lack of women at the top tiers of the movie industry. Check back with OTI in 2033 for a refreshed, extra-gay, extra-female data set. 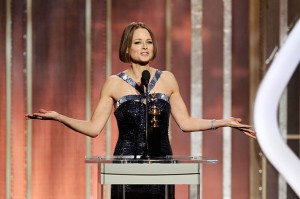 By 2033, I predict that Jodie Foster will win an Oscar and get gay married. Also, in 2033, she will still look like this.

The Great Executive Producer In The Sky continues to be ignored in Oscar speeches. “God” in Oscar speeches typically only comes up in the phrase “Oh my God,” which, as we know, is both a violation of the 3rd commandment (taking the Lord’s name in vain) and not an indicator of belief in or gratitude to God at all. 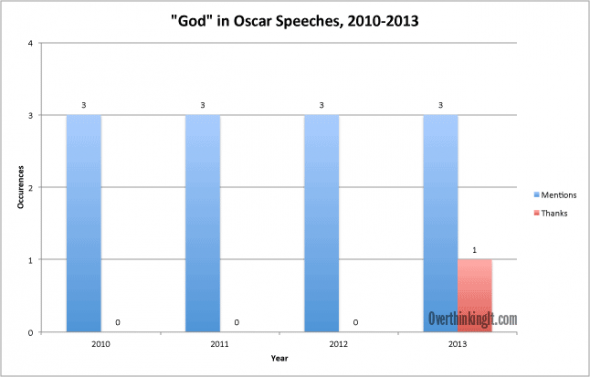 Don’t be fooled by the 2013 occurrence of a thank: Ang Lee, in his acceptance speech for Best Director, thanked “movie God,” who, at least to Ang Lee, is different from the Judeo-Christian LORD OF HEAVEN AND EARTH.

The Judeo-Christian LORD OF HEAVEN AND EARTH would probably claim that title anyway, though.

Ah, the old “movies” vs. “films” debate. It seems like “movies” are beating out “films” in the speeches occurring on Hollywood’s most prominent stage. 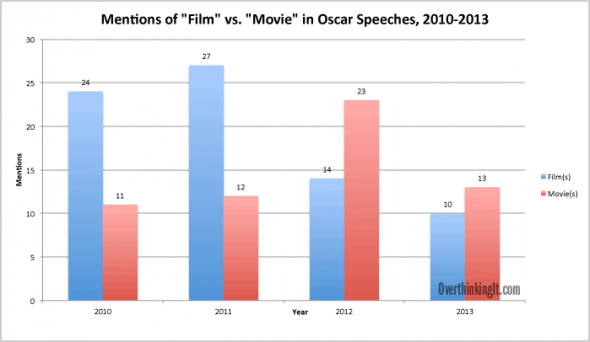 The distinction between “film” and “movie” has mostly been about the artistic vs. commercial nature of motion picture entertainment: “movies” are less artistic, more commercial; films, vice versa. But recently, with the shift away from actual film stock, both in cameras and in projectors, the shift towards “movies” and away from “films” may be more about technology than connotations of artistic merit. Although I haven’t seen it, I’m told that the documentary Side by Side is an excellent meditation on the ascendance of digital versus film photography in cinema.

In an increasingly film-less world, why call anything a “film”?

Oh, right. That little thing called nostalgia. Which is as big of a part of Oscar night as gowns, speeches, and, at least for me, quantitative analysis.