Saying nothing for now about its critical merits or flaws, Django Unchained appealed to me on a very visceral level. Watching Jamie Foxx shoot one slaver in the heart, bust out a cold post-mortem one-liner, and then whip another slaver into a quivering heap, brought about a surge of angry joy that few movies have ever matched. Most movies struggle with getting the audience to cheer for the hero – not just follow his experiences with interest, but applaud when he triumphs and cry when he’s hurt – because of the limited stakes, or the poor writing, or the mediocre filming, or some other factor. Django Unchained works because Jamie Foxx isn’t just killing bad men. He’s killing slavery.

I wrote a little about this when I reviewed Django Unchained on my own blog, thus:

It’s not only possible to get a good education in America – best high schools and colleges – without knowing just how bad slavery was, it’s pretty damned likely. This isn’t to say that we never covered slavery in civics class, or that our teachers overlooked Black History Month. But the narrative that most folks would agree to is that slavery was this awful thing that happened long ago, but the Civil War fixed it, and then racism just kept happening for some reason, but then Martin Luther King fixed that, and that’s why we get the day off.

We don’t really get how bad slavery was, not in the gut. Six hundred thousand people kidnapped from Africa. Four million slaves in America at the dawn of the Civil War. Iron shackles on bare calves, knotted whips on bare flesh, starving in wooden pens that reek of shit. An evil on par with the Holocaust, an industry that was so ingrained in the infrastructure of this country that the regions that profited the most off it – like Mississippi, the setting of most of the film – are miserable pits today.

An Internet friend, with a “well actually” that I can’t help but applaud, took issue with that last line and let me know about it in a comment:

I can find few statistics, but I would suspect that while Mississippi probably made more gross revenue off slavery, the region that profited the most would be the one that financed, insured, and shipped the slaves, and owned the mills and distilleries where their cotton and sugar were turned into clothing and rum. I could be wrong; but there is no question at all that the grand old Brahmins of the city where you live kept their slave fortunes when Mississippians didn’t.

It takes two to profit from a monstrous injustice: the seller and the buyer. Slavery would not have survived for so long in the American South were there not a tremendous demand for the cheap goods that slave plantations provided. One of the major factors that helped end slavery was the Industrial Revolution, allowing Americans to enjoy cheap goods without legions of cheap labor to produce them. Life was still rough for the working man, of course, but it wasn’t cage-helmets-with-spikes rough.

Now, discussing it with the commenter, I’d be perfectly fine with a sequel (Django 2: Brahmin Busting) where Jamie Foxx rode to Boston and murdered the First Families. But how many other audiences would enjoy it?

In movies where our heroes confront injustice through action and danger, we’re most comfortable with our heroes confronting the obvious, direct sources of injustice – the points where the rubber meets the road, if you will. We feel the tension as Oskar Schindler collaborates with the SS in order to save eleven hundred Jews, especially because the SS Lieutenant he has to collaborate with, Amon Goeth, is particularly evil. Would the movie have been as dramatic if Schindler had to collaborate with Ferdinand Porsche? Which movie would you expect to have a bigger box office – a buddy-cop thriller where Don Cheadle and Luis Guzmán take on a druglord with assault rifles and commando gadgets, or one where they grapple with and ultimately lose to the institutional inhumanity of the War on Drugs? And why did millions more people watch Liam Neeson in Taken than watched any of the documentaries made in the last ten years about the Eurasian sex trade?

Part of this is a limitation of the genre. As with comic books, when all you’ve got is an assault rifle, every problem looks like a paper target. We want our heroes to shoot armed men, villainous men, or ugly men, not unarmed industrialists with families. Our lizard brains want our heroes to triumph against powerful foes, thus proving their virility, but our moral sentiments want our heroes to be forces of order and justice, not the great triumphing over the powerless. And we want to not only know this is happening; we want to feel it happening.

So while we might intellectually understand that Django will do more to end the blight of slavery by murdering Samuel Cabot, Jr than by killing three (or even thirty) hick slavers, we would have a hard time stomaching Jamie Foxx shooting a frocked, pasty-faced 80-year-old man and saying, “Cash on delivery, motherfucker.”

Is this a limitation of the human spirit and film as a medium? Not necessarily. I think it’s a function of where the cultural discourse (drink!) has currently taken us. Thanks to the Nuremberg Trials, we’re less comfortable with “I was just following orders” as a defense in wartime. As such, this is a trope that can be used in films (the destroyers in X-Men First Class; the army blowing the bridge in The Dark Knight Rises; just about all of Bridge on the River Kwai) to depict villains, or at least unintentionally tragic institutions.

So someday we may reach the point where the entrenched institutions behind injustice, the “harmless” silent partners, are equally valid targets for bloody vengeance. And on that day, a free man named Django may go riding up Beacon Hill. But not quite yet. 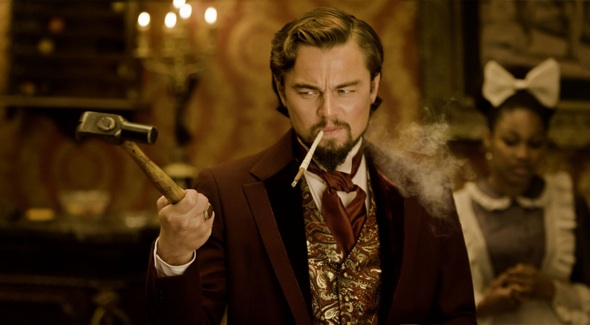