I’ve been catching up on Seasons 1 and 2 of Suits, USA’s slick new legal drama. It plays like a quippier, faster, and more shallow version of Mad Men. It’s just clever enough for my taste, but it doesn’t wallow in its cleverness the way geekier shows do – one of my pet peeves. All that said, however, there are two things I struggle with.

(1) The catchy yet incomprehensible theme song. I’ve resorted to making up my own lyrics rather than guessing at what’s really being sung. “Gonna have a pizza pie / in your eye / Gonna split an onion bomb / with your mom …”

For those who haven’t indulged yet: Harvey Spector (played by Gabriel Macht, having emerged from the doghouse that the title role in Frank Miller’s The Spirit earned him) is a hotshot closer at the prestigious NYC law firm of Pearson Hardman. He’s been told to select a protege out of a pool of interviewing associates, but none of them impress him – except one kid, a scruffy blond with an encyclopedic knowledge of basic law and the photographic memory to prove it. It turns out that this kid, Mike Ross (Patrick Adams), isn’t actually a lawyer. In fact, not only has he never been to law school, he only stumbled into this interview as a way to hide from a drug deal gone bad. Intrigued by Mike’s quick wits and prodigious memory, Harvey hires him anyway.

Neat, right? It tells us something about Harvey right off – he’s a game-player, he values genius and improvisation more than experience, he’s willing to bend the rules to get the job done. It also binds Mike to him in an interesting way – Mike could get in trouble if caught, sure, but Harvey’s career will also be over. So you’ve got two loose cannons on the 50th floor, bending the law in order to serve it.

The only question: how long can they keep this up?

Practicing law without being admitted to the bar, for those who don’t have Mike Ross’s photographic memory, is uniformly illegal. The penalties vary from jurisdiction to jurisdiction, but in New York it’s a misdemeanor. But even without the legal threat, there’s the damage to the reputation of Pearson Hardman. Every time Mike fraudulently represents himself as a lawyer adds another scar to the Dorian Gray-like portrait that must, inevitably, be unveiled. He’s already appeared in court at least twice – most recently in “Break Point” (S2E5), representing a tennis phenom.

Not only has Mike not been admitted to the bar, he hasn’t even been to Harvard – and Pearson Hardman makes a point of only hiring Harvard graduates. So that’s at least two lies that Mike has to keep straight. Mike doesn’t even bother covering his tracks until “Dirty Little Secrets” (S1E4), and that’s with the unsolicited help of a computer hacker. And even when his record is (fraudulently) updated to create a Harvard law degree, he still has an awfully empty past – no college diploma, no prior legal work experience. If any other lawyer invested the amount of effort in checking out Mike’s past that Mike and Harvey invest in checking out their clients and opponents, Mike’s secret would be outed in a heartbeat.

So someone must eventually discover Mike’s secret. And someone, in fact, does – Jessica Pearson (Gina Torres), managing partner of the firm (S2E1). The only reason she doesn’t can him and Harvey immediately is because a bigger threat rears its head. But how much damage could such a discovery do in the hands of Harvey’s intra-firm rival Louis Litt (Rick Hoffman)? Or the Boston lawyer who’s gunning for Harvey, Travis Tanner? 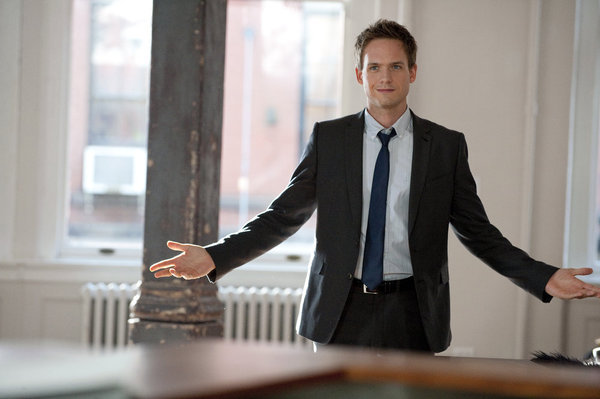 How long can this go on?

On a certain scale, all episode television suffers from this problem. Friends started out as a sitcom about six struggling twenty-somethings (“your job’s a joke, you’re broke / your love life’s D.O.A. …”) but ended up a sitcom about three successful married couples. The Simpsons has sentenced Bart and Lisa to third and fourth grade, respectively, for nearly twenty-five years. And one of these days Ted Mosby has to meet his future wife.

Why is this an issue? Well, because prime time episodic television has to return to an accessible narrative, so that it can always pick up new audience members and sustain revenue. This means that, while characters can grow, they can’t grow in ways that shake up the popular dynamic too much. Some of this may be cowardice by producers; some of it may be the fine-tuned science of showrunning. Either way, it limits the cycles which a popular TV show can make.

These limited orbits make television narratives victims of their own success. If audiences tune into a show because of its original premise – an untested hypothesis, but plausible – then the show becomes popular. As the show becomes popular, the network orders more episodes. As the network orders more episodes, either the show strays further from its premise or the premise becomes less plausible.

Of course, not all shows are equally implausible. Thomas Magnum gets to stay on Robin Masters’ estate for free for an awfully long time in Magnum P.I., but an eight-year freeloader strains the bounds of good taste more than credibility. We have a slightly harder time with Crockett and Tubbs’ run on Miami Vice, able to maintain a low profile as undercover cops despite wearing five hundred dollar suits and driving Ferrarri Testarossas. And some shows can run for years in a steady, unchallenging loop without perturbing our notions of credibility (All in the Family; Seinfeld, etc).

So not all episodic television has to grapple with the issue of plausibility, or at least not as intensely. But some have it worse than others.

In coming to terms with the unsustainability of Suits, I started thinking about shows that also had unsustainable premises, or which started off plausible but grew more ridiculous as time went on. It gave me some useful context, it took me on a little tour of primetime television, and it convinced me that Suits was not the most ridiculous show ever to air. Join me, please, in consulting the Mike Ross Scale of Primetime Implausibility.

Like the Mohs scale, the Mike Ross Scale of Primetime Implausibility (or Ross scale) ranks from 1 to 10, with 1 being the most sustainable premise and 10 the least sustainable. Each point on the scale has a sample show for context and a brief explanation.

1. The Cosby Show: A show that not only acknowledged the growing age of its stars, but was built around it. As each Cosby kid advanced through elementary school, high school, and college, they passed into the wings of history, only to return through syndication or spin-offs. 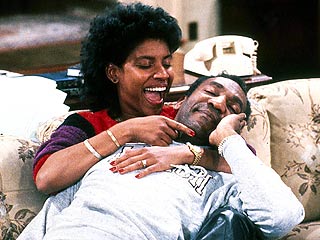 2. Arrested Development: You don’t typically associate the Bluth Family with the word “plausible,” and the three season run doesn’t say much of the show’s sustainability. But the show always stayed true to its premise, however ridiculous it became. While the Bluths’ adventures were absurd, they were at least consistent in their absurdity: the ridiculousness of one season became canon for the next.

3. Friends: Despite being cited earlier as a show that drifted pretty far from its roots by the tenth season, NBC’s grand sitcom always remained within shooting distance of its original premise, no matter who impregnated whom or started dating whom else.

4. Law and Order: Though each episode was cemented in gritty, torn-from-the-headlines detail, the show when viewed as a narrative arc starts to fall apart. How many days of investigation were supposed to be contained in those 456 episodes? And how did Jack McCoy never get elected Attorney General with his amazing conviction record?

5. Lost: At the exact midpoint of the scale sits Lost, a show that intrigues and frustrates its fans in equal measure. It started off with a bang: an ensemble cast, stranded on a desert island. It kept the audience compelled with enigma after enigma. Of course, the time eventually came for some of the cast to escape their island prison. What happened next? They had to go back, of course. 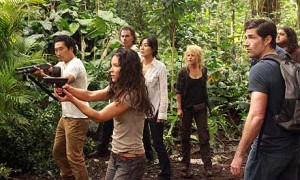 6. How I Met Your Mother: It’s a fun show, the characters are great, and the dialogue pops. But it’s clear to everyone watching that the writers no longer care about the premise embedded in the title. Think of how tiresome the show would be if every episode had to contribute a brick to some grand arch, checking back in on the title like a nurse doing the rounds.

7. Suits: Yes, ironically, the show which gives the Ross scale its name is not the most unsustainable show on the scale. That’s science for you.

8. That 70s Show: We could forgive this show its chronological excesses because of the youthfulness of its characters, the joy we take in their adventures, and the fact that a lot of what we consider “the Seventies” stretched into the early 80s anyway. But c’mon! It’s in the title!

9. The Simpsons: Twenty-four years in which Bart and Lisa stay in the same grade, Homer works at the same job – or doesn’t, depending on what gig the writers want to give him this week – and Mr. Burns clings stubbornly to life. Only the talent of the voice actors and the pliability of the animation make this show possible at all.

And the highest point on the Ross scale, the primetime show with the least sustainable premise:

10. M.A.S.H.: As groundbreaking and inspiring as it was, a show which ran 11 years, depicting a field hospital in a war that lasted 4 years, which was secretly a commentary on a war that the U.S. was in for 9 years, strains our definition of “sustainable premise” to the breaking point. At some point, Hawkeye, the war’s just gotta end. 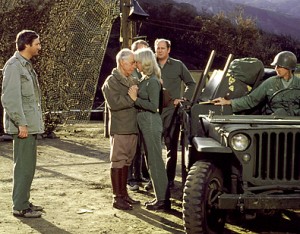 What does establishing the Ross scale teach us? Well, with The Simpsons and M.A.S.H. at the high ends, and The Cosby Show and Arrested Development at the low ends, it’s proof that there’s no correlation between the unsustainability of a show’s premise and its quality. Audiences will put up with any hook, no matter how ridiculous, if the writing stays entertaining and if there’s nothing better on.

So can Suits keep its premise going for a third, fourth, fifth, or even tenth season? Maybe. Why not? It hasn’t hurt The Simpsons any.

Perhaps it can also be a lesson to showrunners – and the network execs who greenlight their shows – to focus less on the catchy premise and more on a show’s writing quality. How much does the initial hook of How I Met Your Mother matter seven years later? How much would the producers of Cougar Town like to take another stab at the title? And does the premise of Community tell you anything about the qualities that make it original?

Of course, our attempts to improve the quality of, and discourse surrounding, primetime television have been going on for years, to little effect. Our best efforts here at OTI always hinge on creating the tools and letting later generations put them to use. So have at it, Overthinkers. Where do your favorite shows fall on the Ross scale, and what does that say about them? 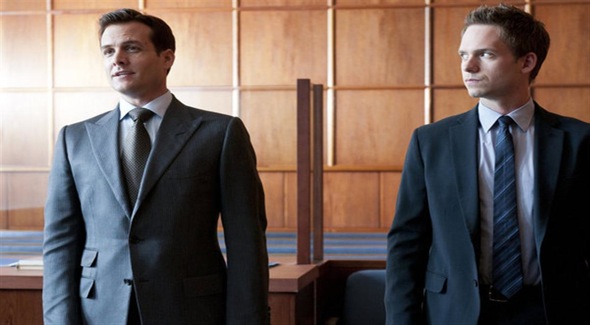 34 Comments on “Suits and the Unsustainable Premise”