“There are pockets of rebels on many of these planets that just need guidance. With training and resources, they could attack soft targets…”

“Now, to be clear, we are not here to fight your war; rather, to show you how to conduct it in the most efficient and successful way possible.”

“I think of it as an insurgency to help realign these planets with the Republic.”

The world is a difficult place. We’re surrounded by war, suffering and revolution – and the news is rightly filled with discussion of the rightness or wrongness of our own nations’ involvement in such affairs. Sometimes we want to get away from it all. Many of us, it seems, do it by diving into cartoons whose technical demographic is far younger than our own – the successes of Friendship Is Magic, Adventure Time and The Clone Wars all speak to this.

Trouble is, the Clone Wars isn’t really a kids show.

We’ve heard before on the site here that The Clone Wars is tragedy dressed up as heroic legend and that it lionises the clones and their morally questionable Jedi generals, but the evocation of the Iliad and the bioethics of a clone army don’t usually speak to day-to-day political issues. The current series of The Clone Wars, on the other hand, does just that.

The Clone Wars Season Five, subtitled Army of Revenge, quickly dispenses with the silliness of Darth Maul and his brother Savage Oppress to move on to its first multi-part storyline, which concerns the Republic handwringing (they may use unethical clonetroopers, but they think about it all the time) over whether they ought to intervene in a civil war on the planet Onderon. Onderon is a planet with a history of violent internal conflict, as well as leadership that can only be described as categorically evil. The last time the Republic got involved in the internal matters of Onderon, it led to a galactic war. The Republic decided, considering how many civil wars there are that fall along Separatist versus Republic lines, to use Onderon as a trial case. Send the Jedi to equip, resource and train the pro-Republic forces and have them overthrow the relatively legitimate government of Onderon without direct attacks on the Separatist-backed Onderonian government led by King Sanjay Rash.

In other words, whether NATO should have intervened in Libya. 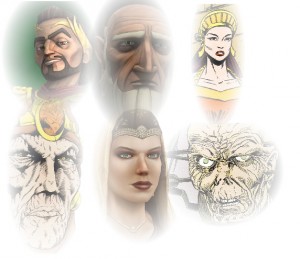 Firstly, the Republic was using this as a test case – many were wary of getting involved, but there were many opportunities for the Republic to replicate this if it proved succesful. As it stands, the impact of the Arab Spring remains strong in many nations – it has provoked uprisings and civil wars. The USA or NATO or the UN, which each here roughly align with the Republic – a force for democracy that isn’t always a shining example of doing it well or effectively – have not intervened except in one case, that of Libya. But the idea that those groups might do the same in Syria is certainly not off the table, though the idea that it might be achieved with limited involvement seems increasingly unlikely. Thus far, NATO has only gone as far as trying to limit the civil war’s impact on Turkey, one of its oldest member states. Greater intervention in Yemen may yet occur to act against Al-Qaeda, dependent on the new unity government’s success at that mission.

The Onderonian Resistance was based around loyalty to the ousted King of Onderon, Ramsis Dendup, the deposed and imprisoned king. He, however, has no operational or indeed direct input to the rebels, but merely serves as their inspiration. The royalist flag of the Libyan rebels similarly evokes King Idris I, who was deposed, exiled and sentenced to death by Gaddafi. Idris I was pro-UN and pro-British but did not get involved in the Cold War, just as Dendup supported the Republic but did not involve himself in the Clone Wars. Equally, Gadaffi supported the Soviet Union, but also, like Rash, maintained a great deal of personal independence.

The key military objective for the rebels was retaking the occupied city of Iziz, which is the capital of Onderon. This battle takes time – the city was filled with a superior military force and the population are terrified. In Tripoli, an initial uprising in February 2011 was put down more successfully than elsewhere, and the layout of the city and shutdown of the internet made it a key Gaddafi stronghold that held until the rebels could bring well-trained and well-equipped forces into play. The Onderonian rebels had the advantage of anti-droid weaponry which would not harm civilians, but the battle was not truly accomplished until they broadcast propaganda holographically and the impotent brutality of the King was revealed. As the rebels approached Tripoli, on the 20th August, an uprising began within the city, aiding the rebels in taking it.

Focusing on specialist weaponry, the Onderonian rebels were skilled at guerrilla tactics and urban warfare, but proved immensely vulnerable to Separatist HMP Gunships, lacking any means of gaining air superiority. The Republic, admittedly via Black Market sources, provided the rebels with rocket launchers that allowed them to wipe out the gunships and redress this balance. Efforts of a different sort but with the same aim were taken by NATO in establishing a no-fly-zone. As far as I am aware, no fighters were engaged in this operation, but air defences were destroyed, and the aircraft also targeted ground and naval vehicles to defend civilians and rebel forces that they themselves could not expect to counter. 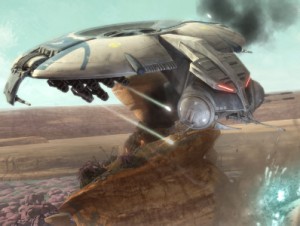 Fear will keep them in line!

Returning to taking the city – one of the reasons why the rebels entered Tripoli so swiftly was that a Loyalist commander surrendered one of his guard battalions to repay the murder of his cousin by the regime years before. The moral quandary for the head of the Onderonian Militia is more complex – General Tandin wants to preserve the peace and livelihood of the people of Onderon, but in the end it is personal reasons that causes him to move from supporting King Rash to King Dendup – that he will not see the former King executed in front of the people. From this point on, Rash is hamstrung, relying only on outside forces that cannot be trusted.

The leader of the Onderonian Resistance is unclear at first, but emerges by popular assent to be Steela Gerrera ahead of her more militant brother Saw and the more peaceful former Senator Lux Bonteri.

However, the conflict ends with the death of this leader in fighting the air power of the state – a gunship shot down by the rebels crashes, leaving both Steela and the rightful King in mortal peril. The Jedi Ahsoka Tano attempts to save them both, retrieving the King, but another gunship wounds her and she releases Steela from her telekinetic grip to fall to her death. Similarly chaotic events led to the death of one of the key leaders of the Libyan rebels – Abdul Fatah Younis was the Commander-in-Chief of the rebel military, having formerly been the Minister of the Interior for the Gaddafi government. Whilst coming back from Benghazi where he had discussed with the rebel leadership his family’s ties with the regime, though those who summoned him may not have had the authority to do so, his car was attacked. He was shot dead during the attack. One of two offshoots of the main NTC rebels are believed to have been involved – both seeking revenge for his actions as Minister of the Interior. He was, nevertheless, buried as a hero of the rebellion. 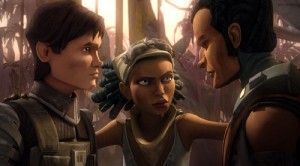 Each civil war is ended by the death of the dictator. In the case of Libya, Gaddafi was found and either killed in crossfire or summarily executed by the rebel forces. This was after a satellite phone call he made was intercepted by NATO, who sent air forces to disable his convoy and allow the rebels to capture him. By contrast King Rash was killed by the Separatist droid general sent to lead the Separatist units at the forefront of the civil war, apparently because of his uselessness to the Separatist cause having failed to crush the rebels.

To conclude, there seem to be a good number of parallels, which might be considered surprising for the genre and target audience of the show. But the Star Wars Expanded universe always has this in it somewhere. The Yuuzhan Vong spoke to the fears in the War On Terror of an ideological battle against something supposedly more alien than Communism. Legacy of the Force shows how moves to create safety reduce freedom. Fate of the Jedi references the Arab Spring continually.

Equally, the original Star Wars films were designed as a specific political fantasy: George Lucas said in 1973 (as quoted in The Making of Star Wars) that:

“The Empire is like America ten years from now, after Nixonian gangsters assassinated the Emperor and were elevated to power in a rigged election; created civil disorder by instigating race riots, aiding rebel groups, and allowing the crime rate to rise to the point where a ‘total control’ police state was welcomed by the people. Then the people were exploited with high taxes, utility, and transport costs. Gangsters, a cartel made up of power companies, transport companies & crime organizations. Other companies had to pay bribes to stay in business.”

“When I first started making the film [the first Star Wars], it was during the Vietnam War, and it was during a period when Nixon was going for a third term – or trying to get the Constitution changed to could go for a third term – and it got me to thinking about how democracies turn into dictatorships. Not how they’re taken over where there’s a coup or anything like that, but how the democracy turns itself over to a tyrant.”

So, be aware the next time you turn on Cartoon Network (or as it will soon no doubt be, Disney XD), you might just be getting involved in an unlikely geopolitical analogy, without even so much as a Gadaffi Stick joke. 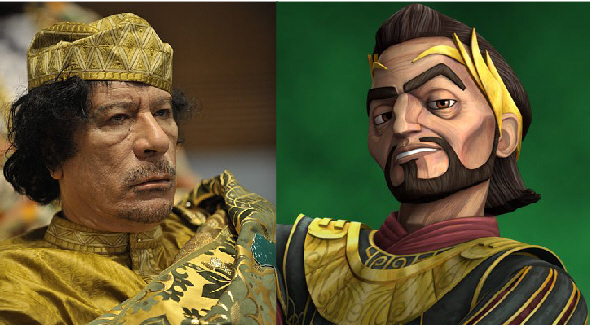 Timothy Swann is that one with the British accent. He talks about Star Wars literally all the time on the Psycomedia Podcast and he twitterates on @tetrarchangel.

3 Comments on “The Clone Wars: Asking Geopolitical Questions to Pre-Teens”