Why do we punish? And why is it so much fun to see punishment doled out? From crime procedurals like Law and Order to superheroes dominating the box office in The Dark Knight Rises and The Avengers, we seem to have a collective fascination with the punishment of wrong-doers. But where does the urge to punish come from? Why are we so insistent that the wicked suffer? Because that’s the key question – punishment, but it’s very nature, is generally backwards looking. Punishing the murderer doesn’t bring back the dead. What good does it do anyone to inflict further suffering, even if it seems like someone “deserves” it? My colleague Matthew Belinkie has explored the legal side of punishment at length, so I’m going to turn my attention towards the extra-legal side of punishment – the vigilante.

In the real world, punishment is the exclusive domain of the state – finding and punishing wrong-doers is arguably what makes a government a government. Preventing individuals from enforcing the law themselves is a vitally important part of maintaining order. In pop culture, though, the vigilante is often seen as a viable – if not preferable – alternative to governmental punishment. There’s nothing we like more than to see one man, alone against the criminal underworld. 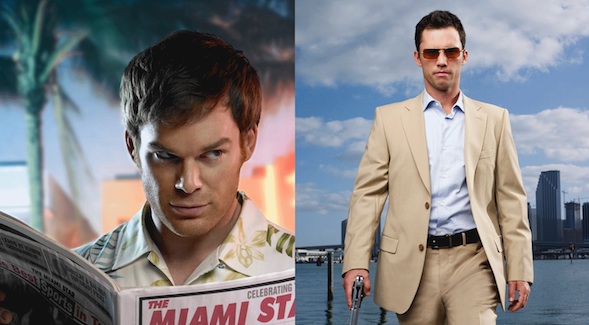 In two different long- running TV shows, Burn Notice and Dexter, audiences tune in week after week to see an attractive white male in his 30s run around Miami and take the law into his own hands. Both characters have deep seated psychological issues stemming from their fathers, have loose ties to the government, and will not stop narrating. This isn’t all accidental – both characters relationship with their fathers are indicative of the deeper ties between our fathers and punishment (See also: Batman, Superman, Iron Man, James Bond, etc.) The tropical setting provides a stark contrast to the darkness of the crimes being fought, and the constant narration keeps the audience rooting for the protagonist, even when his actions would normally have us dialing 911 and calling for them to get sent to the electric chair.

Dexter always kills his victims, while Michael Weston sometimes just scares them away or gets them arrested, but the two men are still fundamentally the same – they have both decided that the government is falling down on the job, and that justice demands they take the law into their own hands. What truly separates the two men is why they do what they do. To understand these two vigilantes and their appeal to the TV audience, we need to explore the reasons that anyone would want to punish someone in the first place.

“Peneology” is the field of criminology that deals with the philosophy of punishment. Peneological theories typically fall into four different categories – deterrence, rehabilitation, incapacitation and retribution. The first three can broadly be categorized as utilitarian theories of punishment – they argue that the benefits of punishing crime outweigh the costs, and is therefore justified.

Under deterrence, for example, the argument is that by punishing wrong-doers, you can deter other would-be criminals from committing crimes. Batman is the classic deterrent vigilante – he wears the cape and cowl in order to strike fear into the hearts of the criminals of Gotham. For each bad guy he beats up, two bad guys are deterred from committing the crime in the first place. While he’s often called on to prevent the schemes of Gotham’s super-villains, his real goal is creating fear – fear of breaking the law. 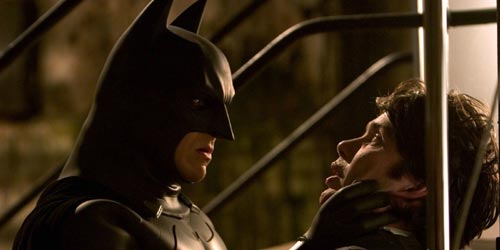 Incapacitation, by contrast, is more specifically targeted. Incapacitation theories argue that we punish criminals because in doing so we keep them away from the rest of society and prevent them from committing further crimes. While Batman plays this role to some extent, Superman fits this role a little better – his goal is generaly to prevent crimes from happening or to put the bad guys in jail after they’ve happened, but his job is generally to inspire hope, not fear.

Rehabilitation is the idea that by punishing criminals, we can get them to see the error of their ways and avoid committing crimes in the future. Perhaps understandably, there’s not really a pop culture rehabilitation vigilante – education and reform just don’t have the same allure as dropping bad guys off of buildings to get them to talk. (You might make the case that the forced confessions that ended pretty much every episode of The Pretender fit this model, but that’s another article). In any case, all three of these theories are based on the idea that by punishing a criminal, we produce some net good for society.

Retribution is an entirely different animal. Under a retributive theory, the wrong-doer is punished because they deserve to be punished. While the underlying morality differs across retributive justifications, the common thread is that there is some intrinsic good to punishment, independent of any benefit that accrues to society. Immanuel Kant uses this example:

“Even if a civil society resolved to dissolve itself with the consent of all its members—as might be supposed in the case of a people inhabiting an island resolving to separate and scatter themselves throughout the whole world—the last murderer lying in the prison ought to be executed before the resolution was carried out.”

To a retributivist, the punishment of evil is an end in and of itself – even if society gains no benefit, it is still worth doing. In pop culture, the clearest example of this theory is Rorschach from Watchmen. (Spoiler alert). Upon discovering the Ozymandias had destroyed Manhattan, he refuses to agree to go along with the coverup. Even knowing that exposing the crime could cause the end of the world, Rorschach is unwilling to excuse Veidt for his role in the destruction of New York – regardless of consequence, the crime must be punished. 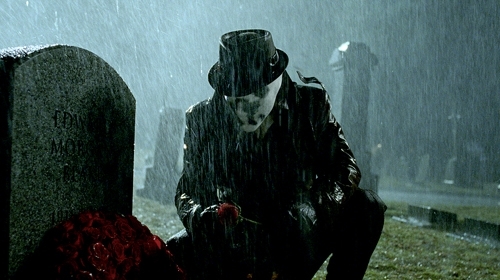 So what separates Dexter and Michael Weston? What keeps them hitting the streets in search of the scum of Miami? Because they both narrate their stories, we can start with what they claim justifies what they do. Dexter claims to be a retributivist – he often says that his victims “deserve” to be under his knife. There’s no deterrence to be had when justice is done in secret, and there’s no rehabilitation to be had at the bottom of the Atlantic Ocean. Dexter kills serial killers because these people deserve to be killed. His motives for killing are supposedly the product of his “dark passenger,” but he is always careful to kill only those that truly deserve it.

Michael Weston, on the other hand, falls all over himself to disclaim any retributive goals. At the start of the “case of the week,” Michael always starts small. He always starts with a specific client and a specific problem to be solved. His goal is never to get to some abstract idea of justice or see that a bad guy is put in jail. When the kidnappers are threatening to kill the daughter of some poor sap that just happens to have met Sam at the bar, Michael’s goal is never to kill the kidnappers or see them put in jail for their crimes – his first advice is usually to just pay the ransom, or if there’s no money, to try and rescue the victim, even if the criminals get away. Punishment qua punishment is never part of the plan.

These narrated justifications, though, only go so far. Dexter supposedly works by a “Code”, but the truth is that he kills because he likes killing. The claim that someone “deserves” to be cut up into little pieces and put into trash bags is really just bloody-mindedness. In this light, retribution is just revenge with a prettier name. Dexter is the reflection of our worst suspicions about punishment and the justice system in general – that all of our fancy “Codes” aside, we’re no better than Dexter and his plastic wrap. 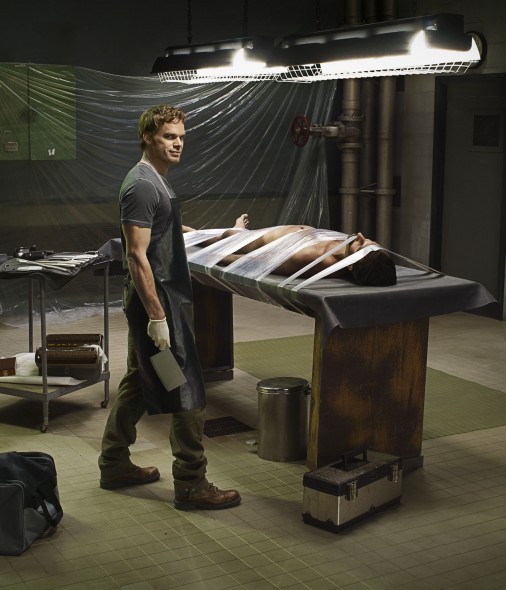 For Michael Weston, who always claims that he just wants to “get in and get out” of whatever problem he’s in, his solution typically involves explosions and creating mayhem across the city. It’s all supposedly in the name of a greater good – but we’re never shown the costs. We never see the firefighters that have to come put out the fires, or the innocent bystanders hit by stray rounds of the firefight. Kant opposed punishment on utilitarian grounds because it used people as the means to an end – and once punishment becomes decoupled from justice, literally anything can be justified. Once Michael decides that he needs to blow up a car or stage a kidnapping to accomplish his goal, he’s off to the races, the police and society be damned.

For “The Greater Good”

There’s one more layer to unpack though. Most people don’t think “I’m a retributivist” or “I’m a utilitarian,” and they certainly don’t worry about it when they’re watching TV. We can have more than one goal behind what we do – you can punish both because it’s good to punish and because punishment does good. Our vigilantes, then, are almost always forced into fulfilling both of those goals. The fictional universe conspires to ensure that Michael’s explosions don’t hurt innocent bystanders, and that our serial-killer-killer is always also  benefiting society. We don’t root for Dexter because he likes to kill – we root for Dexter because the people he kills are going to kill again. There’s more than just retribution going on – every blood slide in Dexter’s collection is  a few innocent victims that never happened.

Simialry, Michael isn’t a pure utilitarian either. We want justice, we want to see the drug dealers get arrested. Even if he doesn’t start out that way, the bad guy of the week always gets his just desert. Michael is rarely allowed to get his hands dirty with a direct kill, but the fictional universe ensures that the bad guy always ends up either arrested, killed or on the run. It’s not enough for the audience that the problem is solved or that Michael has improved society somehow – we want to see the villain punished, and the script always ensures that we get what we want.

The fact is, we tune in to vigilantes because they satisfy both of our urges. They make society better off and they see justice done. Even on TV, the government is just too slow, too inefficient  If we want justice, we have to go outside the system – and because it’s TV, we don’t have to pick between justice and society. We don’t have to decide why we’re punishing the bad guys – we’re just happy to see it done.

9 Comments on “Miami Justice: Two Sides of the Same Coin”