At first blush, the Asari are a cultured, benevolent and highly developed race with both significant military and diplomatic advantages. However, that is a shallow analysis of the species and their characteristics. It is this paper’s goal to demonstrate that the Asari are a race of dangerous, predatory parasites who have evolved a beautiful symmetric appearance and beatific culture in order to take advantage of other species. They demonstrate evolutionary traits which have only one distinct advantage, to appeal to other species to make up for their own lack of available recombinative diversity, inadvertently driving them to extinction.

The Asari are said to be parthenogenetic but never display visible physical traits from their combining species due to no true gene exchange. The entire species is female, which is due to their biologically adopting a form of apomictic parthenogenesis, in which the mother is cloned completely but allows for the use of foreign DNA to introduce mutation to the Asari’s own DNA. This results in none of the non-Asari parents’ DNA being passed on, thus it is used to randomize the Asari genome and then discarded. This is likely due to a lack of selective evolutionary pressures that would dictate a need to enter and acculturate within a foreign species’ population. However, having a single receptive sex, the species never contributes DNA back to the various species that they receive recombinative materials from. There is also no recorded instance of a ‘male’ Asari being born from their normative genetic recombination, which might act as a bearer of Asari DNA to other species. The process of Asari reproduction has also never been shown to affect the DNA of the foreign parent. In the case of humanity, that would be genes or lasting genetic mutation for good or for ill, then transferred to successive generations. The Asari contribute nothing but are dependent on outside contribution; they are parasitic.

The lack of inherited genes from other species leads to a genome maintaining a very limited number of potential protein compositions. To illustrate this, imagine you have a box of random products from a store, and in your life you’ve only ever been allowed to use 6/10 of the items, but every now and then you buy the same box to pass on to someone else (your progeny) and ask someone else (your mate) to reach into the box and pick 6 items at random. Only these 6 items will be used by your progeny. This shows that the Asari species’ genetic diversity is greatly diminished without external material being introduced, and that without other species, the Asari have consistently limited recombinative potential. Without outside species, they would all be using the same 6/10 products for generation after generation, making them more susceptible to extinction conditions. 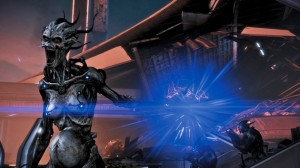 An example of this limitation is found in a genetic condition that the Asari refer to collectively as the “Ardat-Yakshi” who demonstrate a genetic atavism (throwback) that may occur when two Asari mate, resulting in what is referred to as a ‘Pureblood’. This is highly stigmatized within their society, but may have prehistorically acted as a population-expansion safety mechanism for when the Asari species’ reproductive mutations had decreased in effect and their reproductive fitness was diminished. This has left the Asari species with a distinct advantage against environmentally selected evolutionary pressures. Essentially, when there aren’t enough mutations in the genetic line, biology takes over and produces a sociopathic and super-intelligent sexual predator that consumes the nervous energies of anything it mates with. This drive has been anecdotally described as an all-consuming hunger. This has two potential results: the Ardat-Yakshi aggressively expands the Asari territory to encompass new recombinative materials, or it feeds on Asari until the population numbers are reduced significantly, driving the remaining Asari to kill the Ardat-Yakshi still among them and return the population to equilibrium capable of surviving with existing recombinative possibilities.

The atavistic expression of the Ardat-Yakshi may be a result of either past cataclysm-grade extinction events on their home world or constantly diminished levels of genetic resources for mating purposes. The latter implies that to reach their current stage of cultural and biological development, there must have been species in their native environment to mate with, but no evidence exists for that at this time and the Asari are not volunteering any information on the subject. This atavistic regression to an earlier reproductive state, although frightening to a rational being, is very sensible if you consider their cumulative need for new recombinative diversity. The further afield a prehistoric Asari travelled to find a mate to sample for genome data, the less likely they would succeed, the more likely the Asari would mate with one another, and thus, more likely to produce an Ardat-Yakshi. The Ardat-Yakshi wouldn’t fail in travelling far enough to find different genetic material because their predatory instincts will not allow it and they are more capable of collecting that material; one of their abilities is that of a dominating mind control, allowing the Asari to render her prey helpless while mating. The side effects of this process may include cerebral hemorrhaging, comatose vegetative states, and in more extreme cases, death.

The Ardat-Yakshi are known to gain power with each successive lethal mating, as they feed on the energies of the nervous systems of their mates and retain it due to the presence of Element Zero within their natural environment. Clearly this is equivalent of what is known on Earth as ‘horizontal gene transfer’, but through an analogous format. Essentially, the Ardat-Yakshi is consuming the life energy (or more colloquially, the soul) of the one it mates with, rather than sampling it for recombination. This leads to a build up over time, increasing the Ardat-Yakshi’s fitness to reproduce, but failing to consummate the recombination. It is a greedy over-reaction to the hunger state driving the Ardat-Yakshi to mate in the first place, thereby also reducing competition by preventing the Ardat-Yakshi from producing her own young. This may be a mutational disadvantage developed during a time period in which the species had an abundance of potential mates or the Asari may have artificially selected the trait out, leaving the genetic condition (an earlier evolution) to only crop up as a birth defect. Regardless, if the Ardat-Yakshi could breed independently, it would be devastating.

The Asari have been known to live for up to 1000 years, which may have been an evolved tendency due to a very slow limiting of potential mates that would not produce Ardat-Yakshi. This indicates that there may have been a possible period of attrition in the species’ history, the result of which was selection for longer life spans. This suggests a loss of genetic diversity within the Asari home world environment, possibly even the loss of another biological sex that may have been an active contributor during prehistory; a heterogametic sex. The current developmental state of the Asari suggests another sexual component may have once existed, likely before the modern Asari species.

If the stigma of the Ardat-Yakshi were universal, the Pureblood Asari would be more aggressively discouraged from mating, effectively eliminating Pureblood Asari. However, it is not stopping, suggesting there may be disagreement about what should be done with the Ardat-Yakshi despite the risk presented by their frequent psychopathy. In contrast, the common Asari display remarkable empathy and an impressive capability for intellectualizing affect. This has left the Asari with a strong diplomatic presence; but the depth of Asari empathy may contribute to and reinforce the overwhelming hunger displayed by their Ardat-Yakshi progeny. It certainly protects them.

Traditionally, the Asari mated monogamously. However, since encountering other sapient races, the Asari have adopted serial monogamy with other species, becoming a black hole into which genetic data enters but never returns, demonstrating a genetic parasitism. Essentially, mating with an Asari is actively preventing your genes from passing on to your own species, and is not retained even by the mating Asari, although the repercussions of recombination of Asari DNA based on your own DNA would move on in their offspring. Thus, monogamy ultimately leads to your genetic legacy being discarded with your corpse, unexpressed, and biologically unremembered. 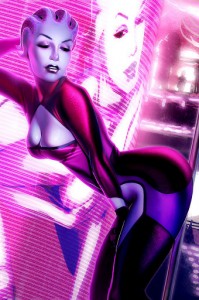 Most races view the Asari as beautiful, likely due to their dominant symmetry and exotic skin colorations. They are also breasted, a trait typically expressed by mammalian life with a history of live births and suckling their young; however most Asari have uniform breast sizes at an optimum weight for visual appeal and never suffer breast ptosis even at the Matriarch stage of their development. They also have a skin type desirable to desert-born species and cartilaginous scalp crests. These are distinct visual advantages when attempting to attract a mate from another live birthing species, such as Humans, Turians, or Krogan, and the large numbers of Asari among the galactic sex trades demonstrate a cultural comfort level with their bodies and lack of shame in their appearance reserved for the asexual, as one would expect a parthenogenetic to be. However, most members of the species have been known to dress to accentuate their features with low cut and clinging clothing, demonstrating an awareness of the effect and willingness to utilize it to their own ends.

Lastly, as the Asari are universally compatible and desirable, they may choose from a variety of other species to mate with, while other species seeking to mate with the Asari suffer from a one-sided choice. The exotic but familiar aesthetic qualities of the Asari have made them almost universally appealing (head decoration, mammalian breasts, scaled skin, etc), creating a demand far in excess of their availability; this allows the Asari to choose their mates with relative impunity. This leads to their more often picking exemplary members of other species to mate with; a good example is Commander Shepherd of the NC7 Starship Normandy who is famed to have relationship ties to renowned xenoarchaeologist Liara T’Soni, and is demonstrably one of the most valuable exemplars of the human species in this century. If they mate for life, the entire Human race suffers for the loss of those genes.

In conclusion, the Asari represent a slow-acting parasitic threat to all other space-faring biological species in the known universe. Their history and genetic development, set traits, and cultural beliefs all indicate fluctuating or diminishing sources of genetic diversity, which leads to an important question: Who were the Asari mating with before going into space, if not with each other? If the Asari could simply mate with the local fauna to achieve diversity in their genome, why do Asari feel romantic attraction toward other humanoid races? Why did they evolve similar emotional tendencies and communication skills? Were there once multiple sexes or races of the Asari, and is that one of the reasons that they are capable of displaying differences in skin pigmentation? We are left with a number of questions, but only one certainty: monogamy with an Asari is the surest way to eliminate yourself from the gene pool. 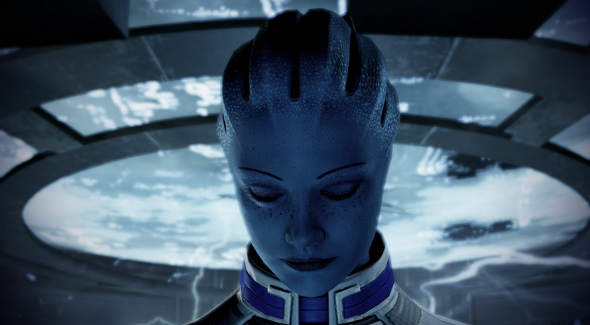 Christopher Drake is a man of too many academic pursuits, scattered across Neuroscience, Philosophy, Psychology, and Anthropology, chasing the cognitive ghost of his mind. He also dabbles in fiction, rarely leaves his house, and has one of the least attended Twitter accounts ever.