Not only is the Empire’s strategic thinking wrong, but as Bruce Schneier might say, they are doing the wrong things badly. The Death Star is so vulnerable that the Rebels discover a devastating vulnerability with literally only hours of analysis. It’s almost certain that any number of Imperial planners and Navy personnel recognized the weakness of the exhaust port but said nothing – “nobody likes a whistle blower, and besides, even a computer can’t hit a target THAT small.”

In the Empire, everything is handled from the top down—the military submits their plans, the Emperor approves it. If the Navy has a plan for a Death Star, they bring the plan to the Emperor, he approves the funds and construction starts. While this seems may seem efficient, centralized management has serious consequences for the Empire. Because of the incentive structure in place in the Empire, the focus will always be on reporting success and pleasing your bosses – without any independent oversight, there’s little hope of fielding a quality product.

Shoddy workmanship is evident throughout the Star Wars saga. The Death Star is an OSHA nightmare, lacking safety rails in high-energy weapons systems and emergency shut-off switches in man-sized trash compacters. Door locks can be opened with blaster fire, and the Super Star Destroyer is so lacking in redundancy that a single errant fighter can bring the whole ship crashing down.

It’s not surprising that Storm Troopers never hit anything – their blasters are made by whichever contractor has the most political clout with the Imperial Command. If that contractor turns out a lot of defective blasters, the General who selected him certainly isn’t going to be the one to report the news to the Emperor and it’s not like the Storm Troopers are going to complain to Darth Vader or ask 60 Parsecs to do an independent investigation.

In the United States, the acquisitions process is a collaborative one, with the elected Executive setting strategic priorities, different branches of the military generating requirements to meet those priorities, Congress holding the purse strings and an independent media critiquing the entire process. The process is unbelievably byzantine, frequently running billions of dollars over budget and years late. 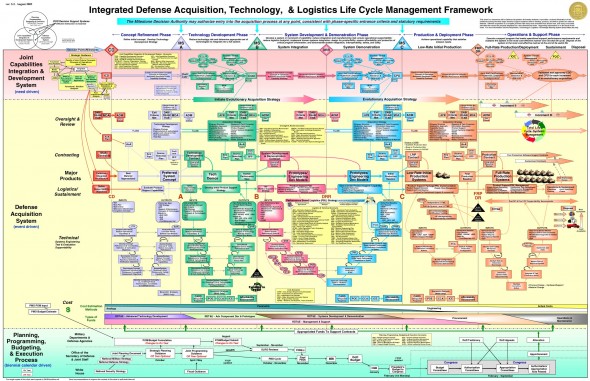 Despite the massive inefficiencies, this is actually an advantage of a democratic system. When a US Soldier gets shoddy equipment, he at least has some recourse – he can write his Congressmen to conduct hearings or ask an independent media outlet to run an investigation. It may take a while, but there is at least a chance for an on-the-ground voice to be heard. In a real life example involving body armor, alternative designs were considered and recalls were made after Marines and Soldiers complained about the quality of equipment provided.

Regardless of the government, defense contracting will always attract rent-seeking profiteers and careerist bureaucrats with no idea how to build a reliable weapon. In a democracy, checks and balances at least have a fighting chance of resisting this tendency—the Empire has no checks and balances, and the system lies to itself until the very end.

The debilitating effect of the Imperial Military intra-service rivalries reaches all the way down to the ground level. When a contingent of Storm Troopers is dispatched to recover the stolen Death Star plans, an Army unit is sent to rescue a project that represents the Navy’s best efforts to make the Army obsolete. Vader’s presence means that the Army is required to make a perfunctory effort at recovery of the plans, but the Army is not particularly motivated to come to the rescue of the Navy’s pet project. Their effort is half-hearted to say the least. Presented with a house-by-house search for the plans, the squad leader adapts the somewhat questionable policy of “If the door is locked, move on to the next one.”

When Obi Wan’s uses the Jedi mind trick on the “weak minded” it would be more accurate to say that the Storm Troopers will to do this particular thing is weak. The Army troops in question are in blinding heat, chasing all over the desert, cleaning up the mess that some Navy desk jockey made. If they DO find the plans, it will mean mountains of paperwork, the death of the Army’s political clout and precisely zero chance of getting off duty and enjoying the cantina. Finding the droids you are looking for is hard. Screw that – it’s the Navy’s problem, let them handle it.

Additionally, the Imperial Military is consistently unable to coordinate operations between large groups of units. In Empire Strikes Back, two Star Destroyers chasing Han Solo nearly collide with one another in their zeal to make a “catch” – instead of coordinating their efforts to catch the escaping ship (and risk letting the other Captain get credit for the kill), they act like kids at a soccer game, rushing towards the ball for their own personal ends.

The Rebellion on the other hand is consistently able to coordinate complex Joint operations involving the Fleet, Fighter squadrons, Special Operations Forces, irregulars like Han Solo and indigenous populations like the Ewoks. For them, personal success means nothing if the missions fails—failure to accomplish their mission means certain death for all involved. The Empire’s top-down structure and death-for-failure incentive program ensures that even at the tactical level the drive for personal glory will trump the need for mission accomplishment every time.

The US military has had (and will continue to have) problems with inter-service cooperation and tactics. In the US though, tactical and operational failures frequently lead to public debate and reform. After the invasion of Panama in 1983, Congress identified a number of weaknesses and command and control structures in the military – leading directly to the Goldwater-Nichols reforms and a legislatively mandated emphasis on Joint operations.

The End of the Empire

All of these factors combine to bring about the downfall of both Death Stars and ultimately the Empire. The Emperor’s entire plan rests on the successful defense of the shield on the forest moon of Endorr and the ability of the Imperial Navy to protect the Death Star if the shield falls—something they’ve already failed to do once.

The defense of that shield is poorly planned from the beginning and is only further confused when the Emperor sends his personal legion of soldiers down to the moon to oversee the operation. The Emperor’s troops take over the defense, but probably had not had time to receive a full briefing on the layout of the compound. As a result, the “back door” to the facility is lightly guarded and the rebels are initially able to gain their way into the control room of the shield; in the event, the Emperor’s troops are able to respond before the Rebels can do any damage, but that’s still a massive risk to take, given that a single suicidal Rebel could bring the whole shield down.

Ultimately, the make-shift command structure of the defenses on Endor proves to be the Emperor’s undoing. When Han Solo takes control of an AT-ST and asks for the door to be opened, the regular Army soldiers inside the shield comply. There are multiple units answering to multiple chains of command, working on an ad-hoc basis, so there hasn’t been time to establish formal authentication procedures or response protocols. The Army just doesn’t want to do anything to piss off the Emperor’s special legion, so they let Han in without so much as a follow-up question. Their fear of what will happen if they defy the Emperor’s “personal Legion” results in the destruction of the shield.

From there, the outcome is predictable – the pride of the Imperial Navy is destroyed by the exact same tactics used by the Rebellion the first time they blew up the Emperor’s pet project. Overconfidence in the Death Star’s defense means there aren’t enough fighters to prevent the Millienium Falcon from slipping through; shoddy acquisitions mean that the Super Star Destroyer is incapacitated from a fluke and the Death Star is yet again vulnerable to attack from a small fighter.

The Emperor and Darth Vader enforce a system where only personal power and influence matter. Individual Admirals and Generals are shown early and often that to put any interest ahead of their own is a one-way ticket to force-choke town. When you demand nothing less than perfection, and enforce that demand with the threat of death, you are only inviting subordinates to lie to you. It’s why Storm Troopers can’t shoot straight OR find the droids they’re looking for; it’s why Super Star Destroyer can be taken down by a single fighter and why the most important defense shield in the Empire can be captured by a squad of soldiers and a bunch of Ewoks. Ultimately, it’s why the Empire fails.

49 Comments on “Systems, Not Sith: How Inter-service Rivalries Doomed the Galactic Empire”