By now, surely you’ve seen the viral music video sensation “Gangnam Style” by Korean singer PSY. If not, do yourself a favor and watch it now:

And if you’re a fan of pop culture analysis, you’ve probably also read one of the many articles that offer interpretations of the meaning of the song and the video. Long story short, it’s a clever critique of South Korea’s culture of conspicuous consumption and growing economic inequality.

Show of hands: how many of you got that, just from watching the video? You, with your hands up. You’re either Korean or have lived in Korea long enough to reach a high level of linguistic and culture fluency. Put your hands down. For the rest of us, the Overthinkers included, the meaning or message of this song is totally lost upon us without outside explanation.

This is not a horse from the video. This is @horse_ebooks.

We made a concerted attempt to decipher the video, starting with the visual aspects that aren’t dependent on understanding the lyrics. But even with the help of translated lyrics, our interpretations were incomplete at best and laughably off base at worst. (Using my thin-but-nonexistent knowledge of Korean culture, I wrote several paragraphs analyzing the symbology of the horses through the lens of Chinese astrology. I was mostly talking out of my ass just to be clever, but I thought it had a fighting chance of being accurate. It turns out I was just talking out of my ass.) In other words, we were all missing the point of the video, and we would have continued to have missed the point were it not for those articles that explained the meaning for us.

Here at Overthinking It, we’re no strangers to episodes of pop culture misinterpretation. We’ve traced the source of Ronald Reagan’s misappropriation of “Born in the USA,” we’ve taken down Fox News’s allegation of communist ideology in The Muppets (with a Marxist interpretation of The Muppets, ‘natch), and we’ve written thousands upon thousands of words about how critics and audiences repeatedly fail to appreciate the critique of fascism in Starship Troopers.

When thinking about our failure to fully understand “Gangnam Style,” I considered it in the context of these examples. We missed the point, but not in the same way that Fox News missed the point when it saw a nefarious communist subtext in The Muppets. The meaning of “Gangnam Style” is nearly impossible for a non-Korean to get, whereas the meaning of The Muppets should be obvious to anyone who isn’t trapped in a nightmarish right-wing propaganda machine. The consequences of us not getting “Gangnam Style” aren’t particularly severe. Sure, we’re missing out on some interesting social criticism, but it’s targeted at a different cultural context, and our not getting it is not some indicator of lack of intelligence or sensitivity on our part. The consequences of misinterpreting The Muppets, however are more severe. Someone who actually believes that The Muppets is a liberal conspiracy to brainwash children is missing out on the positive themes of an entertaining movie and, more importantly, exhibits the lack of sound reasoning that goes along with being trapped in a nightmarish right-wing propaganda machine.

In other words, there are two variables at play when it comes to the misinterpretation of pop culture:

(Note: for the sake of this post, we’re going to bracket any discussion of what it means to “correctly” “interpret” the “meaning” of a piece of pop culture. I of course acknowledge the inherent subjectivity of any such exercise. That being said, feel free to duke it out on the comments.) 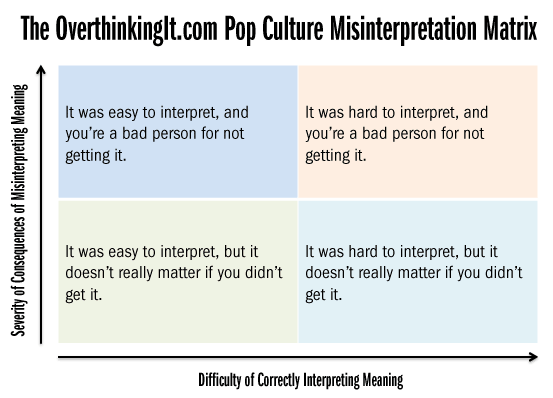 (I swear, I have not been to business school. I just happen to think that the two-by-two matrix is a convenient way of visualizing scenarios controlled by two variables. Which it is.)

Let’s start with the top left hand corner and work counterclockwise through the different quadrants.

Greed. Is. Not. Good

1. It was easy to interpret, and you’re a bad person for not getting it.

This is far and away the worst way to misinterpret pop culture. The Fox News example of communist brainwashing in The Muppets fits into this quadrant, but the best example of this type of misunderstanding is Wall Street and Gordon Gekko’s “Greed is Good” ethos. Michael Douglas complains that he receives misguided praise from financial professionals who see his Gordon Gekko character as a hero and “greed is good” as words to live by. Misinterpretations in this quadrant reflect poorly on the judgment and value of the misinterpreter.

2. It was easy to interpret, but it doesn’t really matter if you didn’t get it.

When I say “doesn’t really matter,” I mean that I won’t think you’re a bad and/or stupid person for missing the point. Examples for this quadrant aren’t nearly as easy to think of compared to the first quadrant, but I think there’s one to be had with The Expendables and its sequel. If the movies are “about” anything, they’re about older men struggling to remaining relevant beyond their primes. This theme isn’t buried under layers of subtext, and it should be fairly evident to anyone with even a passing knowledge of the careers of the movies’ stars. But I’m sure it was lost on plenty of people who walked away from that movie thinking “EXPLOSIONS STALLONE SCHWARZENEGGER WILLIS YEEEEEAAAAAHHH!!!!” and little else. But that’s not any sort of character indictment in the way that watching Wall Street and thinking that greed is good is an indicator of poor judgment and lack of values.

3. It was hard to interpret, but it doesn’t really matter if you didn’t get it.

Our misreading of “Gangnam Style” isn’t the best example for this quadrant, due to the enormous language and culture barriers that stood in the way of any non-Korean’s full understanding of the music video’s message. A better example is actually Troll 2. The creators of this screamingly bad horror movie have claimed that this movie was meant to be a criticism of vegetarianism, but you’d be forgiven for failing to pick up on this amidst the cringe-worthy acting and nonsensical storyline.

4. It was hard to interpret, and you’re a bad person for not getting it.

This, my dear readers, is where you come in. I can’t come up with any examples that belong in this quadrant. Can you? Is there a piece of pop culture that’s difficult to “get,” and if you don’t “get it,” then that reflects poorly on your judgment or character?

It’s possible that no scenario for misinterpreting pop culture can fit in this quadrant, or that my two-by-two matrix is insufficient in capturing the nature of this phenomenon. Or that I’ve created the world’s first two-by-two matrix model with only three quadrants. Which isn’t likely, since I’m pretty sure you have to go to business school to learn how to do that. But I digress. If you have any thoughts on how to fill the 4th quadrant or if my quadrants reflect poorly on my judgment and values, let me know in the comments.

48 Comments on “On “Gangnam Style” and Misinterpreting Pop Culture”