Like all criminal enterprises, the meth empire depicted in Breaking Bad is built on trust. All criminals have to be paranoid, surrounded as they are by the law, but paranoia can’t be constant. It’s tiring and it cuts off potentially productive relationships. At some point, a successful criminal has to let their guard down and admit someone else into their circle.

Trusting Walter White has proven to be a dangerous proposition. 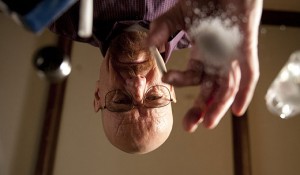 Remember the lovable loser of Season 1?

Tuco trusted Walter enough to do business with him in S1 and S2 and ended up dead. Gus Fring trusted Walter over several seasons and, well, we know how that turned out. While Jesse’s trust in Walter hasn’t killed him yet, he’s definitely in the dark on a few details (Jane’s death, Brock’s poisoning) that would radically change their relationship. As fond as Walter is of Jesse, we know who Walter would side with if it came down to one of them going to jail or the cemetary.

How do you measure someone’s trustworthiness? How do you decide whether or not to trust them again after a betrayal? It turns out there’s a model for that.

The “Prisoner’s Dilemma” is one of the more famous thought experiments in game theory. Devised by the RAND Corporation in 1950, it follows two participants in a non-zero-sum game where betrayal or cooperation are the only two choices.

Two men are arrested, but the police do not possess enough information for a conviction. Following the separation of the two men, the police offer both a similar deal—if one testifies against his partner (defects/betrays), and the other remains silent (cooperates/assists), the betrayer goes free and the one that remains silent receives the full twenty-month sentence. If both remain silent, both are sentenced to only one month in jail for a minor charge. If each ‘rats out’ the other, each receives a ten-month sentence. Each prisoner must choose either to betray or remain silent; the decision of each is kept quiet. What should they do? 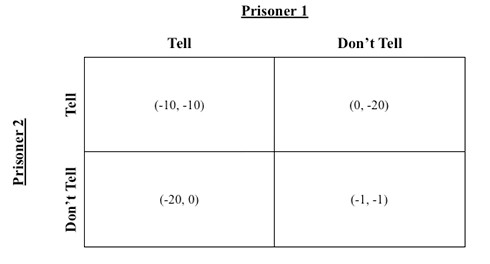 The Prisoner’s Dilemma has been a subject of fascination for years because it contradicts the Arrow-Debreu Model – the microeconomic theory that, given perfect competition and perfect information among self-interested actors, a price equilibrium can emerge that will satisfy all participants. To put it more plainly: given a strict set of hypothetical economic conditions, everyone is best off if they pursue their own rational self-interest. Modern liberal microeconomics hinges on this presumption, and the Prisoner’s Dilemma knocks it off the shelf.

Of course, it only takes a trip to the corner store to tell you that the conditions of the Arrow-Debreu model don’t hold true in real life. The Prisoner’s Dilemma, though couched in a familiar metaphor, is similarly unrealistic. Let’s say we have two prisoners who (inevitably) betray each other and serve a ten-month sentence. What happens when they run into each other after ten months? Bam – an inevitable dust-up. So, reasoning backwards from that point, what are the prisoners more likely to do when coming to a decision in the interview room?

Game theorists have realized this and have simulated multiple iterations of the Prisoner’s Dilemma in the past. Rather than simply playing the game once and letting the results stand, they’ve simulated multiple “arrests” with the same participants. An iterated Prisoner’s Dilemma can produce different outcomes – provided the participants don’t know how many games are being played.

So long as the players know the number of rounds, betrayal is the dominant strategy. 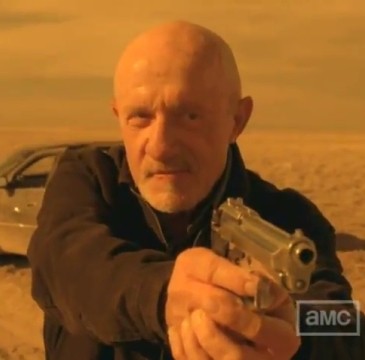 Breaking Bad entered its final season this past Sunday. Both of the core protagonists, Walter and Jesse, have something on each other. Each of them has the opportunity to betray. Neither of them has chosen to, though, because they don’t know how many iterations of the Prisoner’s Dilemma they’ll be playing.

Except Walter seems suddenly concerned that everybody else trust him. He bullies Saul into submission through sheer force of will. He asks Jesse to spot him a few grand to buy the industrial magnet. And, when asked by Mike if his scheme worked, he insists it must have: “because I say so.” Suddenly trust has become a crucial commodity, even more explicitly than usual.

And we know Walter’s planning to betray somebody. We see it in the pre-credits cold open, where he meets with the S4 gun dealer on his 52nd birthday (real? imagined?) and acquires a bipod-mounted machine gun. His facial hair, his fake ID and his deep weariness suggest that this meeting takes place well in the future, long after the other events of this episode.

Walter’s running out of people to betray. He may have cause to off Saul at some point in the future, but Saul’s a minor enough character that his death wouldn’t be strung out on tenterhooks all season long. The only reason Walter would need a machine gun – and the only reason we wouldn’t get to see who he’s gunning for – is to go after someone big. Hank? Jesse?

We have two possibilities, then. One is that Walter is a suboptimal player of the Prisoner’s Dilemma – somebody who always betrays, even when cooperation might work out better. There are times when it’s better to cooperate, especially if you know you’re going to see the other player again. We know that when Walter gets pushed, he tends to retreat into cold, cruel, self-interested logic, even if it may hurt him in the long run.

That’s unsettling, of course. But what should unsettle you more is the possibility that Walter’s been cooperating all this time – cooperating with Jesse. No matter how stressful things have become, he’s kept faith with Jesse. He’s even undertaken serious risks to keep Jesse alive (the finale of S3 in particular). Whether it’s out of paternal devotion or because Jesse has as much on Walter as vice versa, the two have cooperated repeatedly, even when betrayal dangled a tempting bait in front of them.

So why would Walter cooperate for so long and choose this moment to betray? Why would Walter break faith with Jesse now – when Tuco is history, when Gus Fring is dead, when they finally have a moment to breathe? That’s the second possibility, and frankly the unsettling one, but it fits into Walter’s cold, cruel self-interested logic. Walter is planning to betray Jesse because he knows he’s a character in a TV show. He knows what only Vince Gilligan and those of us watching AMC know – that this is the final season. And if you’re in the final iteration of a Prisoner’s Dilemma, there’s no reason not to betray. 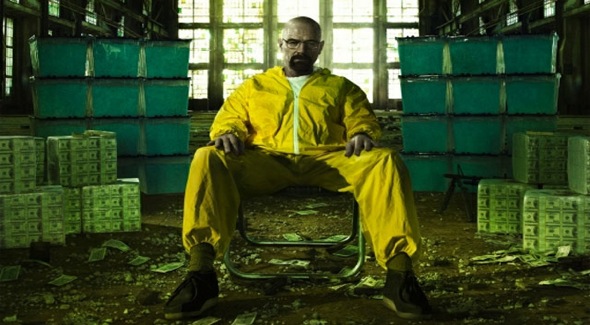