(Spoilers for The Avengers. So go see it already.)

You’re going to lose. It’s in your nature… You lack conviction.”

Heroes as iconic as The Avengers always participate in discourses of power. They model, and therefore advocate, notions of strength, value, money, power, good, bad, right, wrong, identity and behavior, and the way we look at heroes affects and reflects our politics. In The Avengers, this discourse is all about the heroes finding what drives them forward despite  what holds them back, and making a case for the former.

Agent Phil Coulson hands us that key to the movie shortly before he dies. He says to Loki, “You’re going to lose. It’s in your nature… You lack conviction.” Each Avenger and the Avengers as a group resonate with convictions — attitudes that resist dissuasion and compel action. Some of these attitudes are based in abstract concepts, some in psychological or physiological states, some in archetypes, some in life experiences.

Today, rather than pick apart each Avenger, I want to focus on Black Widow, whom I see as an attempt by Whedon (and of course Scarlett Johansson and all the other major collaborators on the project as well as its collective body of readership – the author is dead and all that) to advance heroic symbolism and political discourse around survivors of sexual violence.

Take my love, take my land…

While there is plenty of nostalgia and a surprising amount of sincere conservatism in the film, the core conversations in The Avengers are as progressive as would be expected from the auteur of Buffy the Vampire Slayer and Firefly. We all know Joss Whedon subverts his teenage-boy-friendly fantasies with strong female characters; type-cracking men; and explorations of the warlock queerscape. Doing that while keeping things light enough to lift, energetic and faithful to the spirit of the genre is kind of his thing, even more than banter. And the man loves banter. 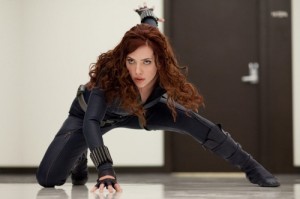 Black Widow in her pre-Whedonesque days.

In this regard Black Widow is as Whedonesque as River Tam on prom night. Just as Buffy makes the horror genre about her experiences as a high school teenager, Black Widow makes being a superspy working among volatile superhumans about the invisible life of the global rape crisis. I would normally default to saying “American,” as it seems wise to apply one’s inevitably reductive judgements to a slightly smaller absurdly large subset of humanity when possible, but Black Widow is a transnational character and The Avengers is a worldwide movie, and it’s certainly a worldwide problem, so might as well go global with it.

I won’t waste time in this article making the case for the statistics or engaging in the various endless arguments that are among the unhappiest things on the Internet (after this we can all go to reddit and argue about it, then we can hit each other in the face with bricks — the two are equally fun and affirming of humanity). Suffice it to say that at Scarlett Johansson’s own age of 27, it’s a relatively fair guess that a third to a half of Black Widow’s female peers have been victims of sexual violence at some point in their lives — and the overwhelming majority of them haven’t told too many people about it or seen meaningful redress. It’s present in Black Widow’s life as a looming threat and cultural norm — invisible in plain sight — just as it is in the lives of most women.

Joss Whedon knows this crisis exists; it’s all over Buffy. And Scalett Johansson almost certainly knows it exists because, well, she’s on the knowing side of the social information asymmetry (sorry boys), which is pretty much the euphemisticalliest euphemism I’ve ever euphemed. Oh, and because she talks about it in Ghost World 11 years ago, and, um, it hasn’t been fixed or anything.

Aaanyway, even if we drop the reality of the crisis in the real world and just look at The Avengers, sexual assault is a constant presence in Black Widow’s world. Heck, it comes after her several times during the movie. At the beginning, we find her tied to a chair in a low-cut cocktail dress, no doubt about to be raped and murdered by Russian mobsters — Or so they think! Spinning Sumo Chair Attack!

Sure, Black Widow is never in any actual danger, and sure, there is no actual sexual contact, but the mobsters don’t know that’s in the cards. They have every intention of exploiting, dominating and abusing her, and every reason to believe it will work and won’t be traced back to them. The representation here is pretty clear — Black Widow knows what the bad guys intend to do, and she knows the bad guys think they will get away with it, so she takes advantage of that knowledge and arrogance to extract information from them. She stays unscathed, because she has the power to take care of herself better than they think she can. 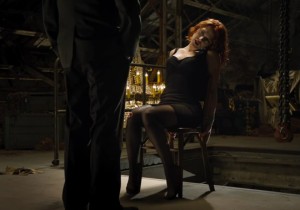 Yes, this character's arc is about sexuality. You might even say it's "tied" to it.

While her strength and agility are useful, her main weapon is that she knows what is happening, and she knows who the bad guys are — and thus can anticipate dealing with them. In her case, it’s literal — she has dossiers on them and is targeting them for intelligence gathering. In her real-world analogue — the metaphorical tenor for which she is the vehicle, the correspondent reality that she symbolizes — she knows assault is the fault of those who assault, and fights to resist the societal pressure to blame herself or her trauma or her shame for the things that people have done or are trying to do to her.

This is the big interaction with the broader discourse of power — the true weakness of rapists and those who commit sexual assault is that people will figure out they are the bad guys. If that happens, they can’t hide among their peers anymore. In practical terms, the vast majority of them are protected by societal, political or discursive barriers, as well as the circles they run in — that guilt or shame their victims from identifying them, protect them from public accusation with social support, and prompt society to look the other way.

But Black Widow is a superspy who looks past these shrouds and finds out the truth, which if you ask me is a very cool way to turn a very bad experience into a superpower. The way in which her own guilt and shame over past experience compels her to do this her Agent Coulson-style “conviction” — a conviction shared by many people who have been victimized by sexual violence, who dedicate themselves to spreading intelligence on it, exposing it and deconstructing and disarming the social constructs that allow it to continue on such a large scale in obscurity.

This is not an accidental insight, based off one scene, and it is only half the ledger, so to speak. Black Widow encounters situations that map onto this experience a bunch of times through The Avengers. The few key instances that draw it out clearly for me:

64 Comments on “Red on the Ledger: The Avengers and Sexual Violence”