We’re big fans of quality discourse here at Overthinking It, which is why we’re looking forward so much to the upcoming US presidential campaign!

Riiiiight. So while we normally try to avoid the touchy subject of politics on this site, we acknowledge that during campaign season, the presidential race saturate pop culture in a way that can’t be ignored and that we have a special obligation to our readers to try to elevate said level of discourse, at least a little bit.

Failing that, we will at least try to make you laugh with pop culture-related political humor.

So with that lofty mission in mind, let’s give our newly minted Republican presidential nominee, Mitt Romney, some unsolicited advice in choosing his running mate. Now that his last major rival, Rick Santorum, has  ended his insurgent challenge for the nomination (in a totally non-sexual way), Mitt is now free to focus his attention on the general election, which means he needs to find partner to go up against this: 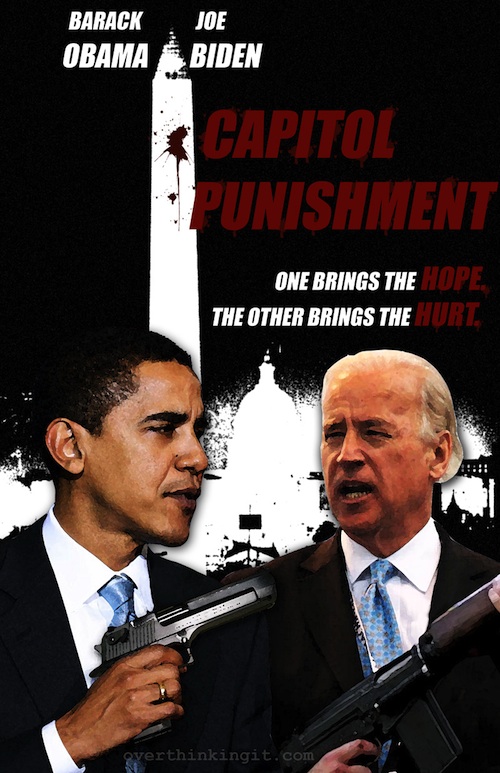 Some of you may recall that in 2008, we denied the Republican ticket the badass buddy cop movie poster treatment and went with a romance novel instead. Although I still insist that I would totally read the heck out of The Maverick and the Maiden (by Karla Rovelace), some may accuse of bias based on this discrepancy. Four years later, I’m going to make up for it by giving you not one, but two badass Mitt Romney buddy cop movie posters to help his campaign make this big choice with the appropriate analytical framework. 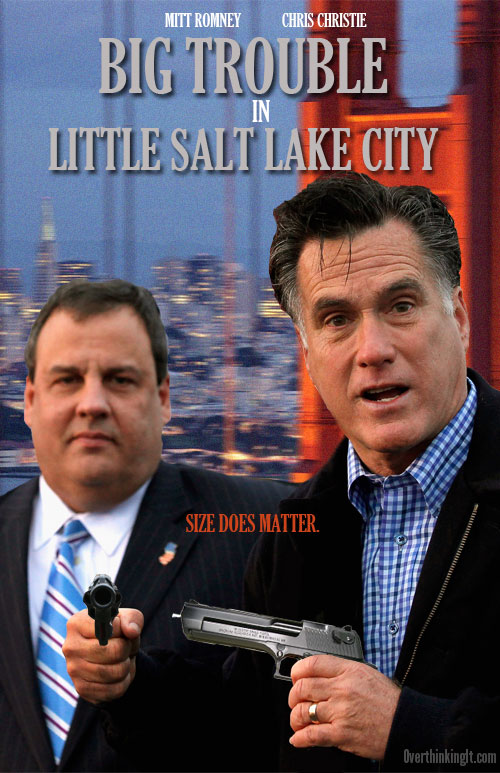 Christie’s blustery style contrasts well with Romney’s measured, perfectly enunciated tone. In other words, Romney is the Good Cop; Christie is the Bad Cop. Interrogation scenes will be a mixture of reasonable pleas for cooperation with multiple citations of Harvard Business School case studies and rage-induced tirades. And the different body types will make for some hilarious physical humor when Christie fails to follow Mitt’s doorless leap into a convertible. Christie’s size will ultimately be an asset to him, as it will allow him to use his catchphrase, “size does matter,” before killing the villain at the end. 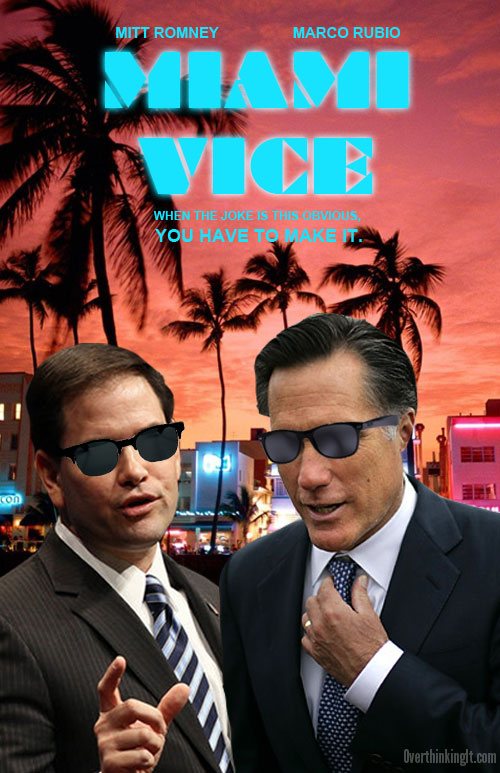 Coconuts may or may not be low hanging fruit on Florida’s palm trees, but this joke certainly was. In case you’re not getting it, Marco Rubio is a Senator from Florida and lived in Miami prior to his election to the Senate. Anyway, Rubio contrasts with Romney in one important ways that Christie does not: ethnicity. Truly great buddy cop pairings, like Glover/Gibson and Obama/Biden, remind us that if two stubborn cops from different backgrounds can learn to trust each other, then maybe we can, too.

Rubio’s exotic Cuban culture will clash horribly with Romney’s staid Caucasian ways at first. Rubio will smoke cigars and insist on blaring loud salsa music from their cop cruiser’s stereo; Romney will make insensitive comments about “you people” taking jobs from “real Americans.” But eventually they’ll overcome their differences. Mitt will learn how to pronounce and enjoy “Cubano” sandwiches; Rubio will learn to turn the radio down when staking out suspects. At the end they’ll shun a hottub full of beautiful beach babes, content in their newfound bromance.

Got ideas for other buddy cop pairings for Mitt Romney? Ideally ones with awesome catchphrase potential? Show me in the comments, either as a written description or as a link to a Photoshopped movie poster!