The Megaman series has been one of the longest-running franchises in video games, with roots going all the way back to the NES era. Part of this success is due to a consistency in both structure and plot. Each of the mainline Megaman games (for purposes of this article, we’re not discussing offshoots, such as the Megaman X series, or Megaman Soccer) is centered around destroying several ‘robot masters’, each of which is designed around a specific theme. For example, Sparkman is shaped like a giant electrical plug and has the ability to create massive electrical currents and throw sparks at Megaman, and Bubbleman can … create bubbles. Megaman pursues each of these robot masters individually, and after destroying them, has the ability to absorb their powers for later use. While the specific details of the narrative will change from game to game, a general outline of just about any of the main Megaman games can almost always be summed up in just three points:

1. Dr. Wily is up to something evil
2. As Megaman, it is up to you to stop him
3. This will involve destroying a lot of robots

At least, that’s how it’s presented to us in the instruction manual and the opening scenes to each game. However, the reality on the ground is drastically different, as Megaman’s actions make him seem less like the savior of mankind and more like an assassin hell-bent on destroying Dr. Wily’s creations and sabotaging his work.

It’s important to note that in every game, Megaman’s actions are always preemptive strikes. While the games tell us that Dr. Wily is building evil robots and threatening the world, this is never shown on screen. We never play as Megaman rushing to the scene of an attack, trying to prevent, say, Toadman, from destroying a city with the awesome power of toads. Instead, it is Megaman who hunts down seemingly unsuspecting victims in their lightly defended bases. Robots are never shown threatening organic life, and the only robot-on-robot violence that takes place in the games is always being directed toward or perpetrated by Megaman himself. 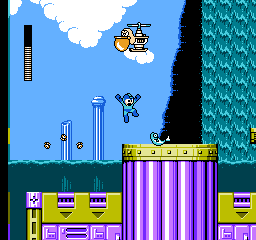 Perhaps the most compelling evidence that not everything is as we were told is that the robot masters do so little to defend themselves from him. The stages that Megaman must trek through to reach them are populated by lesser robots, but very few of them are openly hostile. Some of them will shoot at you, and others will move toward you, but perhaps as many as half of them seem completely oblivious to your existence and simply go about their ordinary routine. Megaman takes damage from collisions with these ‘neutral’ robots, but one could no more describe that as an attack than they could sticking your hand into a machine with moving parts. And the robot masters themselves are consistently found standing in small, isolated rooms, minding their own business. None of them even bother to lock the door.

Admittedly, there are environmental hazards that Megaman has to deal with (bottomless pits, spike pits, lava pits, etc.) before finding a robot master, but these are easily explained not as defensive obstacles, but rather as the conditions that would have warranted machination in the first place. Instead than seeing Heatman as some evil robot hiding out in a lair surrounded by lava, and plotting to destroy the world with some kind of heat-based superweapon, its equally likely that he’s a specialized robot, designed specifically to function in an extremely hot environment that a human could never withstand, who just trying to get some work done when Megaman so rudely barges in and blows him to smithereens. 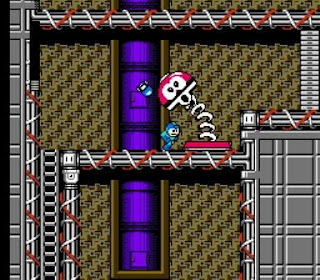 If that seems like a bit of conjecture, keep in mind that this actually was part of the plot of the original Megaman game. The first six robot masters weren’t meant to be used to take over the world, but instead were labor-saving robots that had been built to perform various tasks such as construction and logging. We’re told that they were reprogrammed by Dr. Wily for his evil purposes, but again, the only hostile actions we see them commit are defending themselves from Megaman when he arrives to assassinate them.

In Megaman 2, we are explicitly told that Dr. Wily built eight new robot masters himself. Theoretically, with the opportunity to build eight robots to his exact specifications, one would expect them to either be designed specifically to contribute in his efforts to take over the world. The problem is that very few of them actually seem to have been designed for such a purpose. Instead, we have the aforementioned Bubbleman, as well as the hapless Flashman, whose special ability is to create bright flashes of light, and Woodman, whose only unique feature seems to be that he was made out of a log. This isn’t an army built for world-domination, it’s another batch of specialized robot laborers. 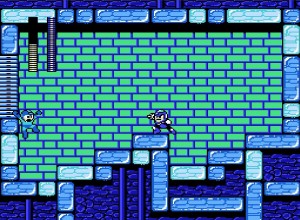 In actuality, the Megaman games are really about two competing robot designers, Dr. Wily and Dr. Light, and Megaman’s role in sabotaging one on behalf of the other. While Dr. Wily focuses on creating multiple robots for a variety of purposes, Dr. Light has a much more efficient, though underhanded, approach. Dr. Light created a single type of robot who has the ability not only to hunt down and destroy other robots, but also to steal their functions. Is it any wonder that Megaman always allows Dr. Wily to live at the end of each game? This isn’t mercy, Megaman needs Dr. Wily alive to create more things for him to steal later.

The genius of this approach is that in one attack, Megaman not only destroys one of Dr. Wily’s creations, but also modifies himself to be able to take over as that robot’s replacement, thus simultaneously creating and fulfilling a need. In other words, he’s a piece of malware with legs and an arm cannon. Keep in mind that Megaman is not unique – there are dozens, perhaps hundreds, of Megamans (Megamen?) in Dr. Light’s arsenal, and each one is capable of uploading his stolen designs back to the others. This is evidenced by the fact that when the player dies, Megaman is immediately replaced by an identical unit who already has all of the abilities that had been earned in the game so far.

Dr. Light’s plan is to destroy all of Dr. Wily’s creations and replace them with a fleet of Megamans. The purpose could be financial; in a world seemingly dominated by robotic technology, quite a bit of profit could come from establishing himself as the premier robot maker. But the goal could be even more sinister than that. By inserting robots under his control into so many different parts of the existing society, Dr. Light is covertly taking over. He controls the skies (by replacing Airman), industrial manufacturing (Metalman), and even snakes (Snakeman).

Megaman never questions the contradictions between what we’re told he’s doing and what he’s actually doing, because, as a robot, he doesn’t have free will. He’s been programmed by Dr. Light to seek out Dr. Wily’s robot masters and destroy them, and does so unquestioningly, probably without any kind of real awareness of his actions or their consequences.

Humans are a little trickier to manipulate, but not much. The narrative at the beginning provides us with a justification for our actions throughout the game, and once engaged, few of us ever stop to question its validity. The gameplay itself feels immediately familiar to experienced gamers: move from the left side of the screen to the right, shoot everything that moves, and jump over the gaps in the floor. Before it even begins, our previous experiences with other games have already given us pretty good idea what we’re supposed to do. While Megaman is hard-coded to behave like a Terminator, we too are programmed, by a dishonest narrator and our expectations.

[Is Megaman a puppet of a man with ulterior motives? Are there any legitimate reasons to build a robot that can control snakes? Sound off in the comments! – Ed.] 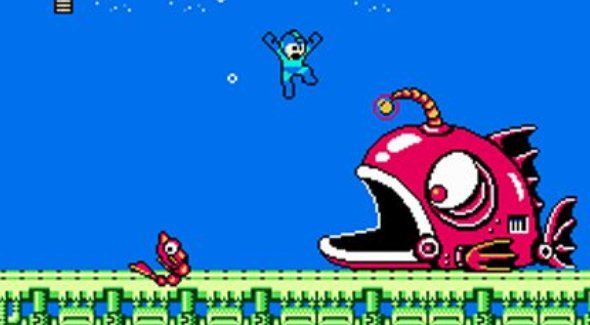 Brad Lawrence disparages old video games at his website Brad Hates Games and daylights as an accountant in Seattle.

14 Comments on “Megaman as Malware”