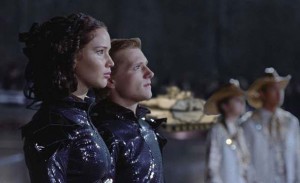 In advance of the opening of The Hunger Games this weekend, the Overthinkers had an email exchange about the appeal of Suzanne Collins’s series of YA novels.

Belinkie
Who’s read The Hunger Games and its sequels? I’m actually really digging them. I didn’t think they would work, and the first half of the second one is slow, but then everything comes together nicely. I really like the idea of this city that keeps these districts in thrall by keeping them geographically separated and specialized for only one industry each. It’s clever.

Wrather
I read them about a year and a half ago, and started retreading the first one yesterday in preparation for the onslaught this weekend. So I’m rarin’ to talk about them.

It’s always interesting, at least to me, to consider what exactly the virtue of a popular novel is… What makes it connect with its audience? With Harry Potter, I think it’s the detail with which the world is imagined.

With Twilight, I think it’s…well, I’m not actually sure what. I just tried out several ideas in my head and don’t like them. Those books are very strange.

But The Hunger Games series is stranger still, because the books are so manifestly brutal, and they don’t pull too many punches. (Except when it comes to sex.) It’s a good story, OK, but really what’s the hook?

Fenzel
For me the hook to the Hunger Games book was Katniss’s voice, no contest. She’s a wonderfully rendered teenage girl (and through my sisters, I have tons of experience with teenage girls not at their best).

The book was a little Keanu Reeves-ish in the sense that I think the limits in Collins’s writing style added to the character rather than took away—the cliche or over-the-top, but totally self-convinced way she described things, her inexplicable-in-context reliance on familar contemporary figures of speech (like “aw, nuts” and stuff like that), and the limited coherence or depth she ever achieves in her emotional perspective on anybody add to her teenage-ness and the elegant relationship between her immediate microcosm and the macrocosm of Panem.

But yeah, after reading the book I see why most of the marketing is pictures of the girl. Katniss (Collins describes her as a female Theseus) is the reason for the book’s popularity.

Belinkie
I think Perich was dead on when he wrote about how Katniss’s success and survival really requires her to act a certain part, to basically live up to stereotypes. She’s basically rewarded for putting out and being a doting girlfriend. A lot of YA is about learning to be true to yourself, but this is about how the world will make a teenage girl dress up and go to parties, when all she really wants to do is hang out in the woods. [Stokes also wrote about something related. —Ed.]

That’s definitely what surprised me about the first book—the Games are partially about fighting and killing, but they’re also a popularity contest.

Fenzel
Reading what Belinkie wrote makes me rethink what I wrote.

I haven’t read the sequels, as I said, but the first book is very much not about being true to yourself. It is about being true to your interests. The personal or transcendental self in the Hunger Games seems entirely subordinate to the economic or political self. Katniss sacrifices a whole lot of her identity in the first book to win, and it’s generally viewed as a triumph, even though she ends it confused about her feelings and kind of wanting to continue to live a lie.

That might be what sets this book apart from others. In other books, you have a hero who has an opportunity for wealth or power, and to do it they need to sacrifice their integrity or their spirituality or some essential honesty, and they say no: no, it’s not worth it, I will prize these other things over money or power. And then of course there is some Gwahir the Wind Lord nonsense and the person is rescued from self-destruction through the rather ludicrous notion that the universe protects the selfless.

The Hunger Games is deceptively pro-greed. Oh, it’s against other people being greedy, but it’s not against you being greedy. It is in favor of identifying the people you don’t like, legitimizing why you don’t like them, and justifying the fight in your life to take from them what you want by any means necessary. It is about women beating the old boys club, about subaltern peoples beating colonizers and imperialists, rural people beating urban people, and children murdering bullies—not as part of a balancing sense of justice, but because of a war for resources. Everything that might otherwise be important—love, integrity, humility—is at some point subordinated to the totally legitimate hungers suffered by the protagonists.

So maybe that is why it hooks on to people. Because people still want to win. They want money, they want food, they want success, they want youth and fame and power, and the Hunger Games says it is okay to want these things, especially if you feel like a decadent, dehumanized elite has taken them from you by unfair means and deprived you and made you suffer (which of course everyone feels, even other decadent elite)—and especially if you are a woman. Because after all, you have responsibilities and people in your life you care about, and they’re worth it — which is really a justification everybody uses for everything.

It is interesting that of all the “tournament to the death for the entertainment of a decadent dystopia” books or movies I’ve encountered, The Hunger Games is by far the most positive and least horrified about violence—as long as it is being done by people who are on the right teams. Like when Thresh mauls Clove with the stone — that’s one child brutally murdering another child, and it’s presented sympathetically, because it is in Katniss’s interests. There isn’t really a point in the first book where Katniss is held up and it’s said “Geez, isn’t it messed up that she just murdered a kid? Hasn’t this society gone mad?” No, it’s messed up that she’s forced to do this, but now that she is, it’s fucking game time. Not like in Battle Royale or the Running Man or stuff like that, where there’s a sense the protagonists are kind of going insane because this situation is just intolerable.

Maybe this changes a lot in the other books, but in the first book, it really seems like the main moral is that people who think they are suffering need to stop looking to transcend their position or finding inner truths and start sacking up and backing their own horses.

Wrather
The later books in the series take on this hypocrisy a little more directly.

Spoiler alert (minor) for Book 3: the resistance movement comes to resemble in its structure and politics of the Imperial force that they’re resisting a little too closely. Katniss is the one who recognizes that, while everyone else is swept up in the righteousness of the cause. I won’t say how she resolves the conflict for herself, but it’s a climactic point in the third book.

I’m reminded of an article by Stanley Fish (“Two Cheers for Double Standards,” March 12, 2012) that I read recently on the New York Times website. He was talking about the controversy over Bill Maher calling someone a slut and none of the righteous liberals complaining, though the shit really hit the fan when Rush Limbaugh did the same thing. He was pointing out that the politically motivated outrage was motivated to an idealistic notion of Enlightenment liberalism, which focuses on procedural fairness rather than the character of a speaker or the substantive content of what he says. And we don’t really work like that. Bill Maher is a different person than Rush Limbaugh, and he says different kinds of things, and nobody in their right mind would tar the two with the same brush just because they happen to be saying the same four letter word.

The Hunger Games is on the side of Stanley Fish. In subordinating the spiritual and idealistic to the material and the political, we are put in a world where we like our side better because it’s our side, idealistic consistency be damned. When they hurt us it’s terrible, mostly for historical reasons but also because they’re bullies and we don’t have much chance to hit back. When we get our shot, we’d be fools not to take it.

This is not to say that the world is entirely selfish—there seems to be some obligation to help others, as the relationship with Rue suggests. Though honestly, when she’s described, it’s more her surprising competence that gets emphasized, rather than her helplessness and need for protection.

I didn’t grow up with sisters, so for most of my adolescence teenage girls were mysterious and frightening creatures, into whose psyches I had almost zero insight. I hope you will allow me to sidestep the question of whether such is still true of adult women. But Pete’s explanation is of a piece with my subjective experience of reading the novel, and I think he’s right to about the limitations of the writing being actually kind of fortunate given the subject matter. The story is narrated in the first person and in the present tense, after all, so there’s the sense that we view it through the lens of the maturity of the main character and that what we get are immediate impressions rather then considered reflections. If the narration seems moody, inconsistent, conflicted— if the description of life’s intractable conflicts is insufficiently nuanced—well, the narrator is a teenager.

This, I think, is where I don’t find the reading about her coercion (i.e., the argument that manipulating her into the romance with Peeta is a kind of violation) convincing in light of the series’s worldview. it’s not just that she’s being whored out for ratings. It’s not quite as simple as trading sex for food (though I don’t suppose that’s ever very simple), and it’s not a simple conflict between doing what she wants and doing as she’s told. She doesn’t know what she wants.

What’s really happening is that she’s being instructed in the dynamics of her world, dynamics in which she is already complicit: her intangible, spiritual needs (know her own mind, sort out her feelings) are subordinate to her material needs. She’s being taught the nature of her own interest.

Dad was a good singer, in other words, and his songs are pretty, but he’s dead. Get to smoochin’.

Stokes
In classic moody teenager style, the very fact that “everyone wants” for her to get with Peeta is one of the main things driving her away from her natural desire for sloppy makeouts with a cute boy that smells like bread. But where this impulse is sort of pathetic in the real world, it’s justifiable in the Hunger Games world—first because everyone really is watching, second because they’re all callous, evil bastards.

There’s also something very… I don’t want to say “real,” exactly, but recognizable about the way that Peeta never has to struggle with his feelings for Katniss in the same way, and always knows exactly what he wants.  This isn’t what teenaged boys are like at all, but again, we’re inside Katniss’s head, and a lot of teens—hell, a lot of people—walk around feeling like they’re the only ones who have ever felt conflicted about the roles society is slotting them into, like everybody else already knows how to play the game.

20 Comments on “What Makes “The Hunger Games” Good? [Think Tank]”